The AZEK Company is a producer of durable and low maintenance building materials, and like many manufacturers, it found its compressed air system to be time consuming and expensive to keep maintained. But that changed after the company replaced its outdated and faulty compressed air system with a new design that includes technically advanced air compressors, dryers, receiver tanks – as well as controls to provide better control of the entire system and achieve optimal performance.

Based on the successful project, AZEK improved the reliability of compressed air needed to maintain production and reduced its annual electrical consumption by 1,444,332 kWh for a savings of \$90,993 per year. In addition, the system is now managed by the compressed air service provider – allowing AZEK to focus on its core business. 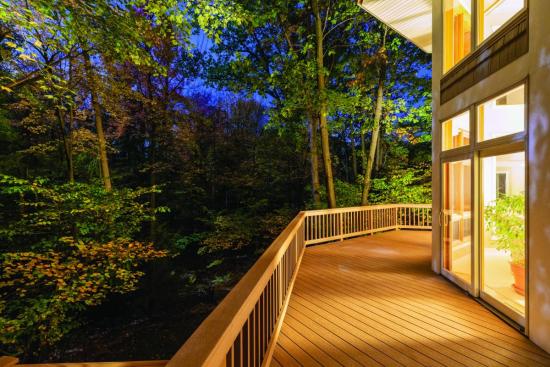 The AZEK Company is a producer of durable and low maintenance building materials.

Headquartered in Chicago, AZEK (https://azekco.com/) is a producer of durable and low maintenance building materials. The company wanted to upgrade its compressed air system at its Wilmington, Ohio, location to enhance its reliability and save energy. AZEK also wanted to get out of the air compressor service business and work with a vendor who could manage, maintain, monitor, and guarantee air compressor components for them.

In late 2017, AZEK was contacted by Industrial Air Centers (IAC) after learning other vendors were not able to offer what AZEK needed. Subsequently, AZEK determined IAC was the best company to work with based on its capability and the flexibility it offered with the overall project scope.  IAC is a full-service compressed air and vacuum solutions provider.

Together, IAC and AZEK developed a plan catered to the plant’s specific needs and based it on a program IAC calls “Compressed Air Supply.” The focus of the major capital project, which required a lot of planning and time management, was to replace AZEK’s faulty compressed air system and create a new setup resulting in a reliable system designed to meet the demands of the plant. In addition, IAC would manage the compressed air system.

AZEK’s existing compressed air system had major issues as it was in very poor condition. The original system included 11 rotary screw air compressors ranging from 75 horsepower (hp) to 200 hp spread out over three locations. Two of the air compressors were down permanently which limited the capacity of the system. Additionally, the system did not use Variable Speed Drive (VSD) air compressors and the existing equipment was a varied mix of different brands. Some of the equipment had been brought from other facilities and didn’t fit the needs of the plant. The system also included nine refrigerated dryers and limited compressed air storage, which included three dry receiver tanks and two wet tanks. 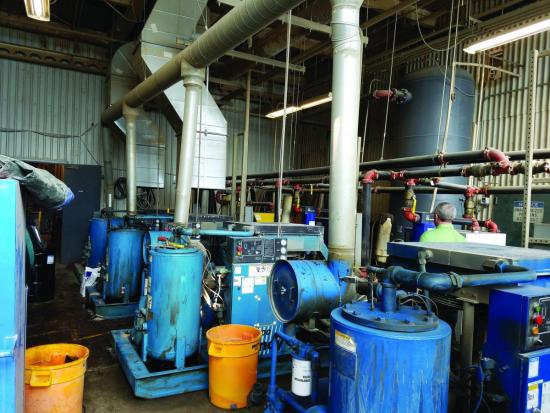 To get a better understanding of AZEK’s needs IAC performed a supply system audit at the end of November 2017. This provided the necessary baseline to start planning next steps. During the seven-day audit, IAC found AZEK’s system had an average demand of 4,190 scfm and would peak at 4,560 scfm for about an hour. It also averaged a pressure of 95 psig with pressure drops at filters and at various points of use.  The pressure in the main production areas fluctuated from 60 to 105 psig, causing inconsistent production.

When conducting its assessment, IAC learned AZEK was using 76% of the system capacity at peak production and if a single air compressor went down the operation would not be able to meet demand causing delays in production. It also found other significant issues. This included the lack of sufficient storage capacity, as well as limited airflow between two production areas due to poor pipe sizing. This significantly reduced the capacity of the system. These problems, as well as the poor equipment setup resulted in AZEK having high energy cost to the system.

In addition to inefficiencies, AZEK’s compressed air system was not reliable. Other items to be addressed were pressure dew point as well as poor air quality caused by a very dusty environment. Lastly the company had an air compressor control system that did not provide the level of control, remote monitoring, and historical data management it wanted.

Another key part of the planning process included an audit conducted by the local utility company, Dayton Power & Light (DP&L). AZEK worked with DP&L to conduct pre-scenario and post-scenario energy metering of the operation’s compressed air system, which in turn, illustrated the energy savings to be created by updating the operation’s compressed air system. DP&L’s pre-scenario audit showed AZEK had an average annualized energy consumption of 7,831,152 kWh. With a peak power consumption of 914 kW for the air compressors. The assessment demonstrated the potential for DP&L to provide AZEK with a rebate based on reduced energy consumption and demand charges.

Overall AZEK was running an unreliable compressed air system costing \$493,362 per year just in energy usage. The system was also a source of major risk given production problems which would occur if a single air compressor failed.

IAC’s plan consisted of removing all the outdated air compressors and installing four new 300-hp rotary screw air compressors, two of the new compressors with VSD. Each of the compressors is rated to deliver 1,667 scfm at 125 psi. Each of these machines is designed to be an excellent trim unit. Additionally, the new system included five new refrigerated dryers and four small desiccant dryers. The desiccant dryers would dry air travelling outside through piping between buildings to different point-of-use locations. Also included in the new system are the addition of two wet receiver tanks and one dry storage tank to its existing mix of storage tanks. It also added a system of filters. The plant retained two older air compressors for use as backup. Additionally, it continues to use its original dryers. 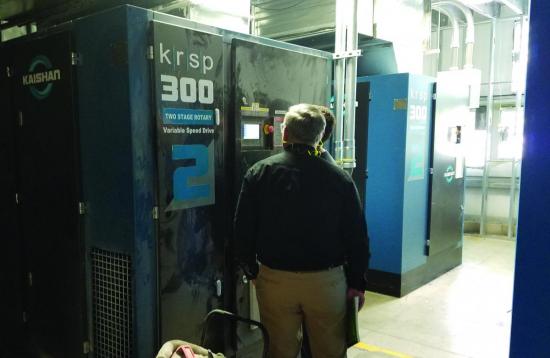 The Airleader ensures production demand is met by turning on and off compressors as needed, eliminating the problem of having multiple air compressors running at partial capacity. It also logs data it gets from sensors and makes it easy to monitor and review historical data for kW, dew point, pressure and temperature. Importantly, access to historical data allows both IAC and AZEK to review the system at any time to see trends which could indicate a potential issue early on, or the need for preventive maintenance. 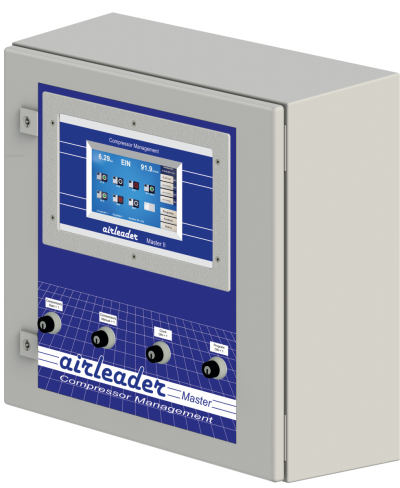 The Airleader Master air compressor controller is part of the air compressor management system used to control AZEK’s compressed air system and ensure it operates as efficiently as possible.

Like most projects, the IAC-AZEK team overcame numerous complications. One hurdle it was able to work out included a compressed air system spread out over multiple locations. Due to pipe sizing restraints there were limits to how much flow could be shared between locations. So, before any new equipment could be added, redundant piping headers were installed.

Once this was completed IAC installed the new equipment into what was previously office space. There were also several delays due to unrelated plant construction they had to work around. By working carefully with AZEK, IAC was able to maintain the production of the facility while installing the new equipment. IAC managed it by using standby compressed air equipment during the installation period.

After this initial portion of the project AZEK had a new system including six air compressors, two of which are VSD units. The new equipment ensured they could always meet production demand. The new system also provided ample backup in the event of an air compressor breakdown. The new piping system allowed for more airflow to each location. The dryer set up fixed the high dew point related problems. The new filters also helped manage the air quality problem caused by the dusty environment.

After the new system was up and running, DP&L gathered data to gain insight into compressed air energy usage. DP&L recorded new annualized energy usage of 6,386,820 kWh, representing a savings of 1,444,332 kWh. The peak energy usage was reduced to 762 kW, a reduction of 152 kW.  The energy savings reduce the power cost \$90,993 a year. In addition to energy savings, DP&L issued a rebate check to AZEK for \$130,746.56 thanks to the reduced energy use and demand charges. Based on the data, the energy savings alone pay for approximately 40% of the monthly cost of the new system. In addition, AZEK now has a significantly more reliable compressed air system with advanced air compressor management controls allowing it to operate at peak performance levels.

Following the project completion, AZEK expanded in early 2020 and added another 200-hp air compressor, as well as a refrigerated dryer to its newly configured system. In August of 2020, it approved yet another expansion of a compressed air system in a nearby building. When completed, the system there will consist of three, two-stage 150-hp air compressors, three 1,100 cfm refrigerated dryers, two 1,060-gallon-tanks, and a crossover pipe to the main building. The piping will allow both systems to supply air to the entire manufacturing complex and use the Airleader system for control to ensure efficient operation.

Airleader Compressor Management is a company that focuses on continuous improvement. Their Airleader Master air compressor controllers run a whole compressed air system based on actual demand and self-learning capabilities to ensure the most efficient operation without brand limitations. Their Master controllers monitor and data log key points of a compressed air system providing 24/7 system awareness. Their goal is to create a system that helps customers “Be In the Know.” To learn more, visit https://airleader.us/.

All photos courtesy of IAC and Airleader North America.