A Case for KPI Measurement in Compressed Air Management


John, the facility manager at a metal processing and assembly facility, had a complex building management system that tracked the performance of many building systems including his compressed air system. From his desk the system looked to be producing some strange readings, and he suspected a measurement error on the flow meter measuring total compressed air output. When he compared the air compressor amps to flow, there were times when the system showed no air compressors running, yet the flow meter was still reading significant output into the plant. Replacement of the meter did not correct the situation.

Subsequent investigation by a compressed air auditor revealed an unexpected cause of the problem: John’s company had not followed one of the rules of a good energy management system, which is capturing the readings in a complete measurement boundary.

This article discusses the challenges faced by this particular facility and the need for accurate Key Performance Indicators (KPI’s). 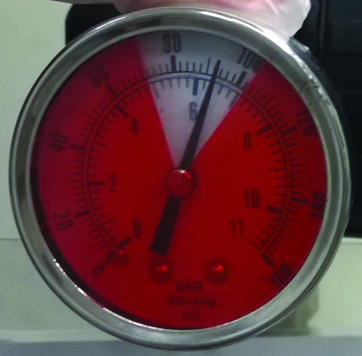 Figure 1. This pressure gauge is an example of a simple KPI with upper and lower limits.

All industrial facilities use some form of compressed air, and in most, the air compressors consume a significant amount of the total energy bill. A facility with a good energy management system is likely to identify their compressed air system as a significant energy user (SEU). If the facility were using an energy management standard, such as ISO 50001, they would be required to assess and track the energy consumption of all their SEU’s. In the case of the metal processing facility, they were measuring the output of more than 250 devices within the plant, including building heaters, RTU’s, dust collectors, and also tracking the consumption of their electricity, natural gas and water.

The results of their energy management efforts to date have been impressive. Since 2012 this facility achieved a 25% reduction in their electrical costs, enough to win a prestigious award from their local energy utility. Knowing there were problems with their compressed air measurement system, and knowing good potential efficiency gains could be achieved in better measuring their performance, John called in a compressed air auditor to have a look.  And it paid off with significant potential savings identified.

KPI’s and How They’re Valuable

And from Klipfolio.com a very important point about key performance indicators:

Key performance measurement is important to compressed air systems due to the high cost of operation. An industry norm is for very little performance measurement on these systems, but we know through experience that a significant number of compressed air systems run very inefficiently with high levels of waste. We also know owners and operators of these system are often unaware of the problems. Measuring key performance of these systems raises awareness of the problems and brings it to the forefront. Thus a good system of measuring and evaluating compressed air-related KPI’s could lead to substantial improvements in the cost of operation, reliability and quality of compressed air.

What KPIs are Most Important?

By far, the most important thing to care about in a compressed air system is air pressure. In fact it is so important many users will sacrifice energy efficiency for good system pressure. In a typical system there are usually hundreds of pressure measurement devices throughout the facility showing the state of the air pressure, which is also an indication of its importance.

And more importantly, as taught by the Compressed Air Challenge in their Fundamentals training seminars, compressed air producers should ensure they have “a clean dry stable flow of compressed air, delivered at the appropriate pressure, in a cost effective manner.” Further, the owners and operators of the systems need to minimize waste caused by leakage, artificial demand and inappropriate use of compressed air.

But how do we know we are achieving these objectives? This is where measurement comes in, as any auditor of compressed air systems knows. Without some sort of measurement the system cannot be properly managed. In measuring compressed air systems and comparing to typical benchmarks, a good compressed air auditor (or energy manager) can very quickly determine if a particular system has the potential for improvement. Often this involves placing temporary meters on the air compressors, but more valuable is a good permanent system of monitoring that allows operators to ensure their system is running correctly, and stays that way in the long term.

Let’s look at some ways to measure pressure performance. The simplest way could have system operators regularly spot check the pressure gauge on their particular production machinery, an example of which is shown in Figure 1.

If the needle on the gauge is sitting between the high and low marks, all is good. But if the operator isn’t always looking at the gauge, he may miss times where this key parameter is out of normal range. A better way of monitoring to ensure pressure performance is to data log and plot the pressure over time. An example of this is depicted in Figure 2. This is a pressure chart of a typical week in the metal processing and assembly plant. 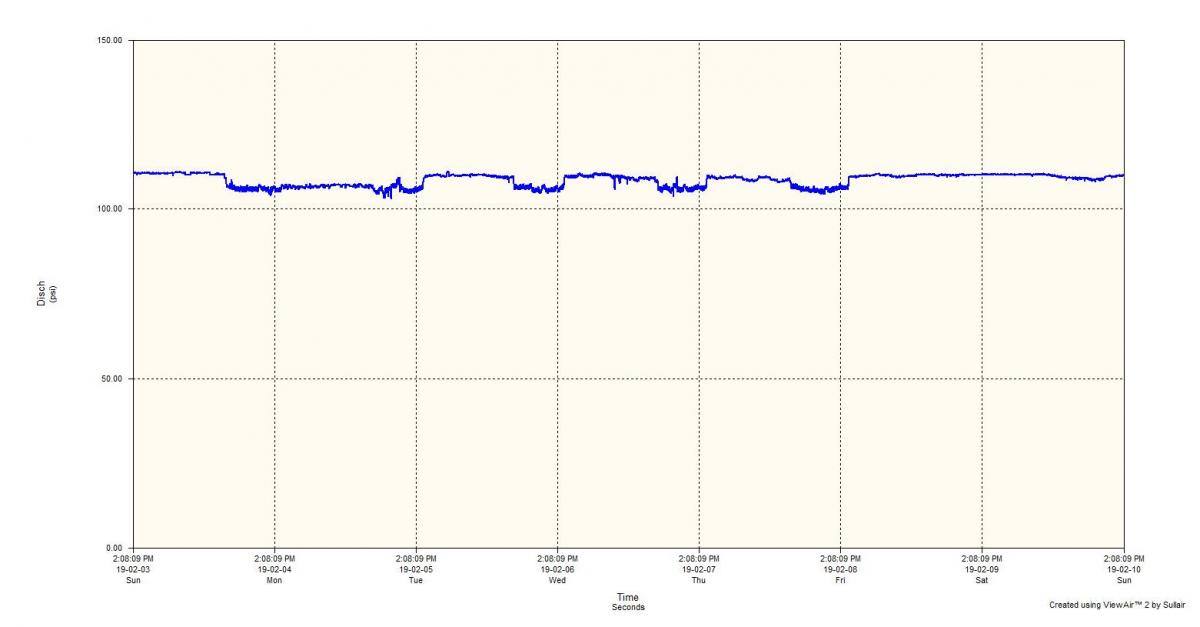 Figure 2: A simple-time based pressure chart is used to determine system performance. Click here to enlarge.

The plant’s goal was to always have the pressure at critical assembly tools above 90 psi, which is the rating of the tools. We can see from the chart it appears this goal was met over this measurement period, but was it? In this time the plant was reporting trouble at the tools. If we dig further we find this measured pressure is at the discharge of the air compressor, not the tools.

As shown in Figure 3, an additional trace with a measurement of the actual pressure at the input of the tools shows the pressure is indeed falling below 90 psi. If operators took a spot reading at the wrong time, they would miss the low-pressure events that occurred later, during a peak production period. It is interesting to note that despite the hundreds of measurement points in their building, and the importance of air pressure to the plant assembly tools, the compressed air pressure was not a parameter being monitored. 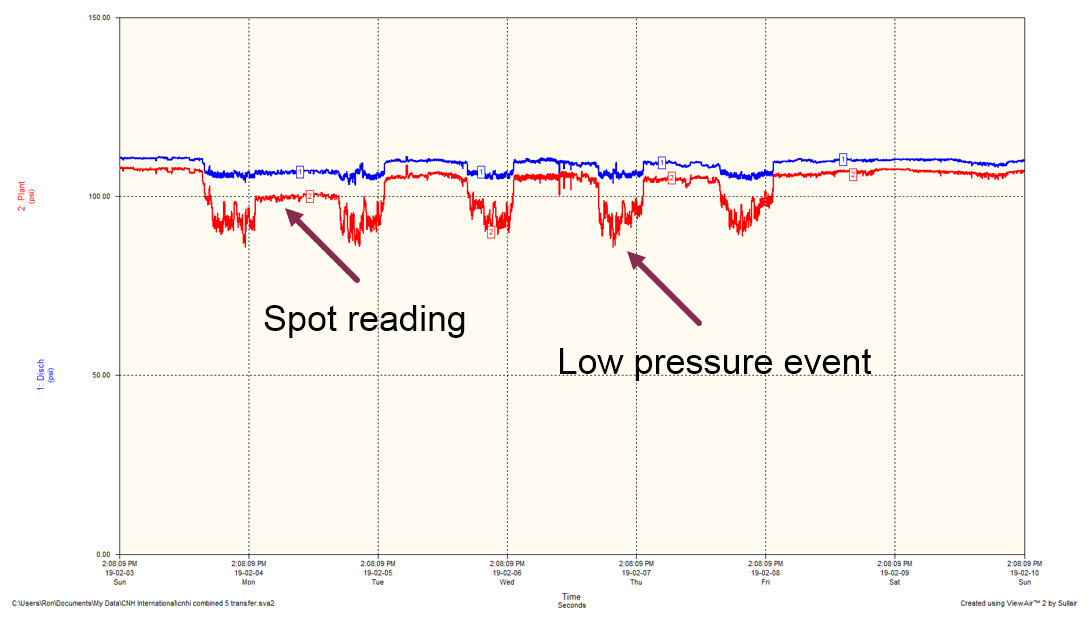 Figure 3: Added measurement at the correct point shows the pressure goal not being met. Click here to enlarge. 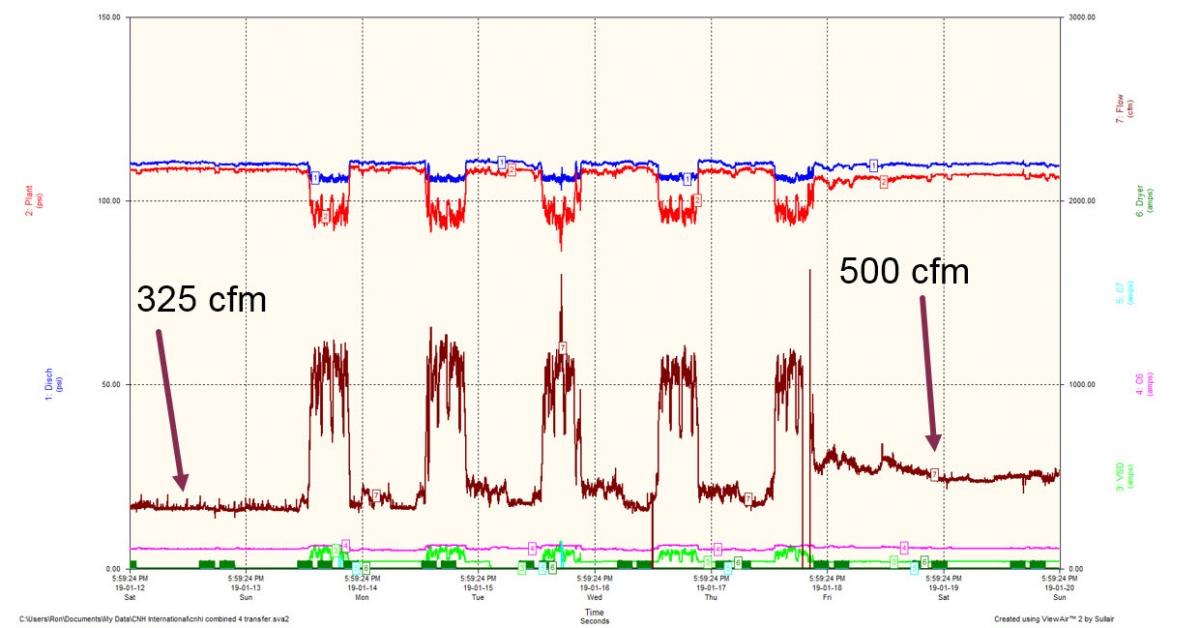 Installing some additional metering for flow and air compressor/dryer amps gives more information about this system. We can see in Figure 4 the pressure issues are being caused by transient high-flow events, and a large pressure drop is occurring across some components at high flow (this was determined to be an air dryer filter).

Power consumption appears to be excessive for the level of flow, the system is consuming an average of 27 kW per 100 cfm while producing 500 cfm. This differs from an optimum value of about 20 kW per 100 cfm. And it is interesting to note there appeared to have been a step change in low-level flow during non-production hours at the beginning and end of the measurement (weekend flow).

Despite an extensive system of monitoring this site was having pressure problems, had high levels of system waste, and poor compressed air production efficiency. The compressed air management system had no clear target KPI’s and lacked a good system of communication to energy managers to make them aware of these problems.

In all fairness, confusion is not uncommon about key performance in the industry. In an attempt to improve this problem the Canadian Standards Association developed the CSA C837 standard “Monitoring and Energy Performance of Compressed Air Systems”. To learn more, visit: www.airbestpractices.com/standards/energy-management/new-csa-c837-16-compressed-air-efficiency-standard.

Unexpected challenges often pop up with measurement systems These can make KPI calculation and analysis more difficult. The most common ones:

This metal processing and assembly plant in the story has an excellent building management system on which to build a much-needed dashboard screen that displays important compressed air KPI’s. Over the years the author of this article put together quite a few moderately successful compressed air monitoring systems, but the biggest challenge faced is communicating the data from the system to the user in an understandable way.

To be honest, watching the parameters of a compressed air system is boring, like watching paint dry. In a properly running system there will be a whole lot of nothing to be concerned about most of the time. In a busy plant, the operators and managers of the compressed air systems have many other tasks to capture their attention and efforts; they can’t usually afford the time to constantly watch their compressed air system. A successful monitoring system, therefore, needs to be simple to use, create understandable data, and have a system of warning so problems with the system can be quickly detected.

Because compressed air users have become more interested in energy efficiency some innovative companies have started to develop tools that can be used to monitor important compressed air KPI’s and have created either local or web-based platforms with dashboard and data analysis tools.

One example dashboard product that tracks various compressed air parameters is shown in Figure 5. This system uses the same terminology as the CSA standard C837-16. Users can tell at a glance how their system has been performing through user selectable measurement periods. Instantaneous values, parameter minimum and maximum, energy and flow are all displayed for the information of the viewer. The system has a good warning system and a well-developed reporting structure, which is important to users. 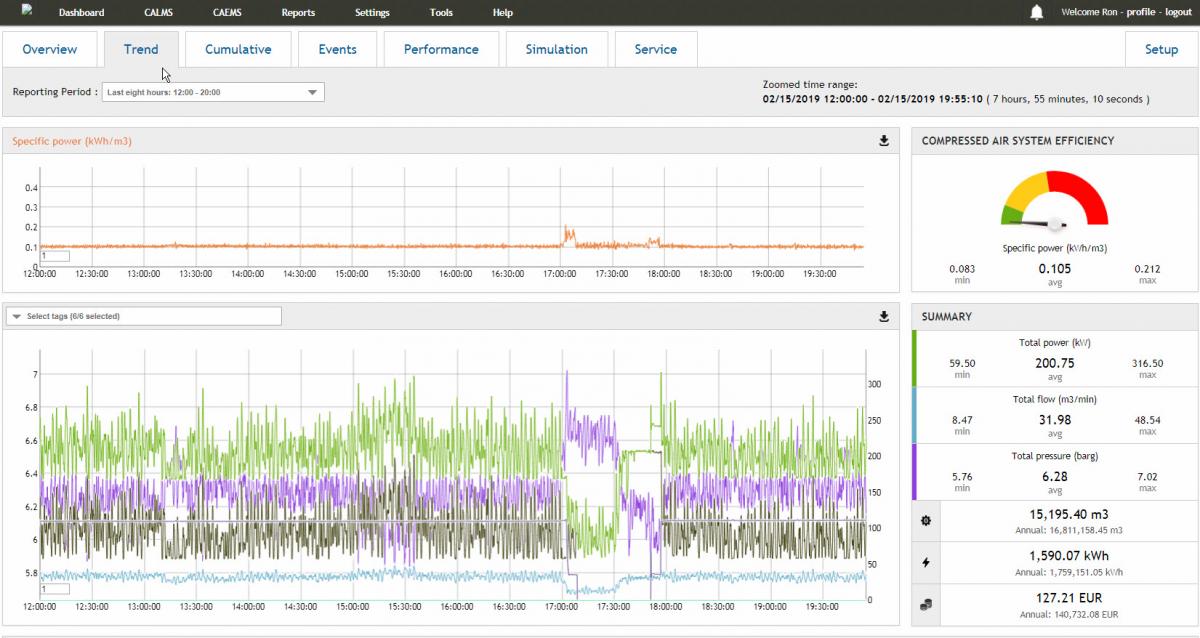 Shown in Figure 5 is a screen from this system with some analysis tools that can be used to track the system curve, which is the energy versus air consumption. A perfect system has a proportional energy response with a change in flow, with the terminus of the trend line at zero, similar to the data shown in Figure 6.

An inefficient system would have a plot that looks like a shotgun pattern, with very poor energy response to change in flow. This system curve can be used to predict the savings that could be gained by reducing compressed air leakage, changing pressure, or changing the way the compressed air is produced (more efficient compressors or control). This dashboard and analysis system is designed with the user in mind, but has tools and analysis methods that can be used by advanced auditors to help with energy conservation measures, including leakage detection and management module. 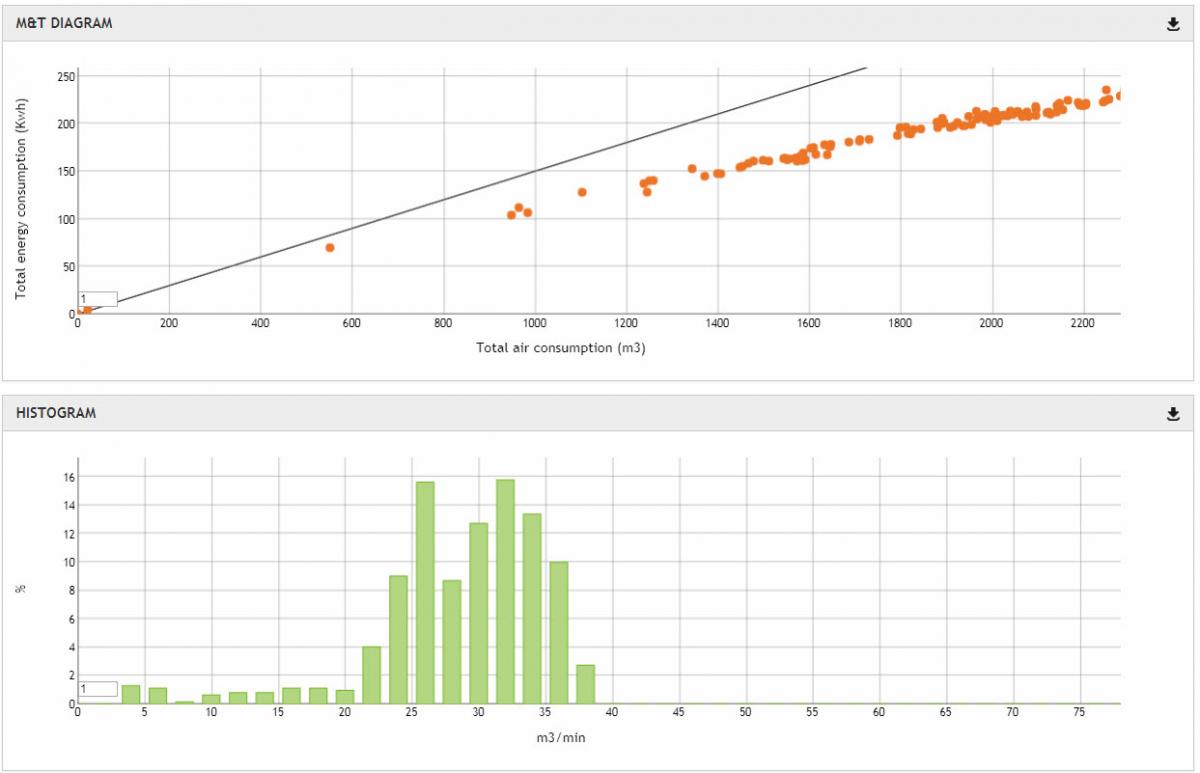 Having a tool for monitoring compressed air systems is a valuable asset for plant energy managers, but it is important the output of this system is clear and simple to use. A best practice is to monitor the specific power of a system to ensure the production of compressed air is and remains efficient.

Tracking flow and energy consumption over time and comparing measurement periods can tell plant operators how the compressed air system is trending in terms of the appropriate or inappropriate use of compressed air and levels of waste. It is important to have a system that raises the operator’s attention if the KPIs start to show abnormal readings. In this way adjustments and improvements can be made in a timely manner.