This metal fabrication and machining facility produces high-quality precision-built products. Over the years, the plant has grown and there have been several expansions to the current location. The company currently spends \$227,043 annually on energy to operate the compressed air system. This figure will increase as electric rates are raised from their current average of 9.8 cents per kWh.

The set of projects recommended, as a result of the system assessment, could reduce these energy costs by \$89,092 or 39%. In addition, these projects include a centralized control system that will help plant staff maintain efficient compressor sequencing and monitor key system performance indicators on an ongoing basis. Estimated costs for completing the projects total \$156,000, representing a simple payback of 22 months.

The objective of this paper is to provide readers with an example of some of the information gathered, during a system assessment, BEFORE any conclusions or recommendations are made. This is information that any factory would do well to know and have on file.

The following actions were taken to establish the baseline for flow, kW and pressure in the compressed air system.

All air compressors are in good working order and have performed reliably over time. Area 1 compressed air is supplied by two Atlas Copco single-stage, lubricated, air-cooled rotary screw compressors. One is a GA90 constant speed, two-step controlled unit. This machine is a 125-hp class producing 498 cfm at 125 psi. The other GA90 is a variable-speed drive control (125-hp class), producing 549 cfm at 100 psig set discharge pressure.

The current system has controls on all but the GA90 VSD. The GA90 VSD is a 2-step load/no-load control. The variable speed units can vary their speed from 600 rpm to 3,260 rpm. The current units have capacity controls capable of translating “less air used” into a comparable reduction in electric cost. These controls will not work effectively with the current piping and air receiver storage situation.

The normal operating band of the compressed air supply is 10 psig. The effective storage capacity is created by the location where this band is neutralized. The current sequencer system for the two GAU809 units does not appear to benefit the system. This system assessment will recommend a central control system working off a target pressure set-point; with interface with the company-wide enterprise energy monitoring system. 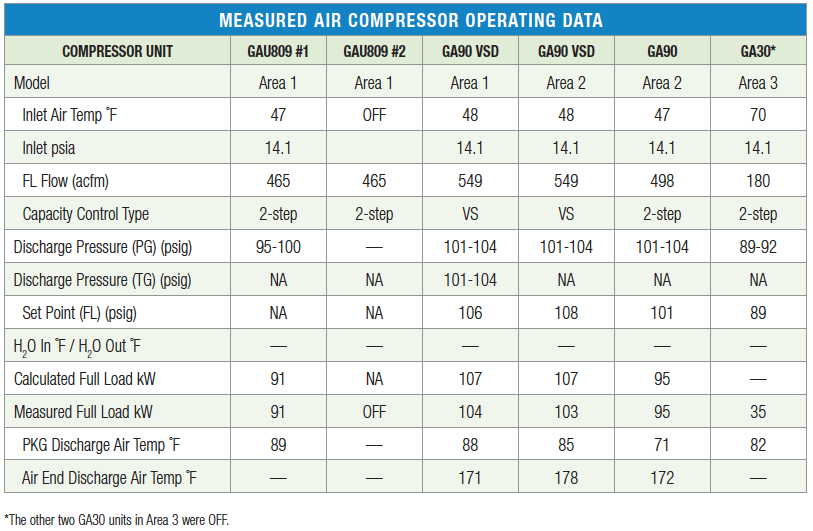 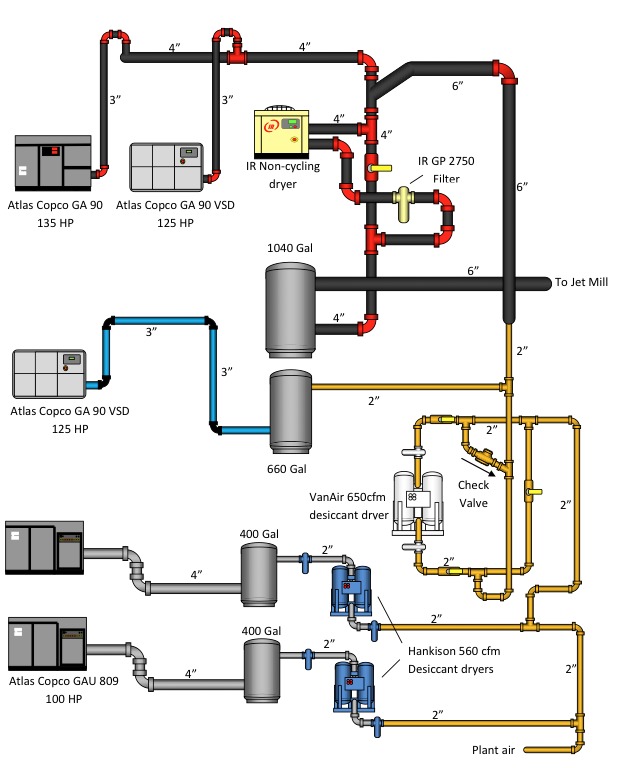 Non-Existent Maintenance of the Desiccant Dryers

Key features of the plant’s current dryers are displayed in the table below. According to plant personnel, the three heatless desiccant dryers are not required for an acceptable dewpoint. These three dryers consume 265 scfm of compressed air for regeneration (purge air). The expected dewpoint from these dryers is in the -40°F PDP range, as compared to the dewpoint of a refrigerated non-cycling dryer of +40°F PDP.

All equipment requires maintenance and compressed air dryer maintenance has been non-existent. This was evident during our site visit. The three desiccant dryers were functioning, yet certainly not delivering the design dewpoint due to the maintenance neglect.

The refrigerated dryers have also not been maintained. This was most evident when looking at the condensate drains. Area 1 uses a non-cycling refrigerated dryer rated for 2,479 cfm air flow (IR TS13A). It uses a timer drain which appears to be working although it shuts off while a significant amount of liquid condensate is still being expelled. This again is a maintenance issue. It is probable that the liquid condensed water vapor is not being completely removed and is contaminating the system. There is evidence of oil and /or water leaking from the discharge line of the 1,040-gallon dry receiver.

Production, nevertheless, appears to be normal with no identified moisture problems - even with these high pressure dewpoints. The receiver, filter, and piping are keeping the liquid water away from the critical processes.

The MotivAir dryer in Area 3 was not working on this visit. It was working correctly on the first visit. More standard maintenance issues. When the dryer is off and air is flowing, the wet air is placing liquid condensate into the compressed air system. The moisture present in the piping of Area 3 will have to be evaporated in the future by dry air coming into the system. 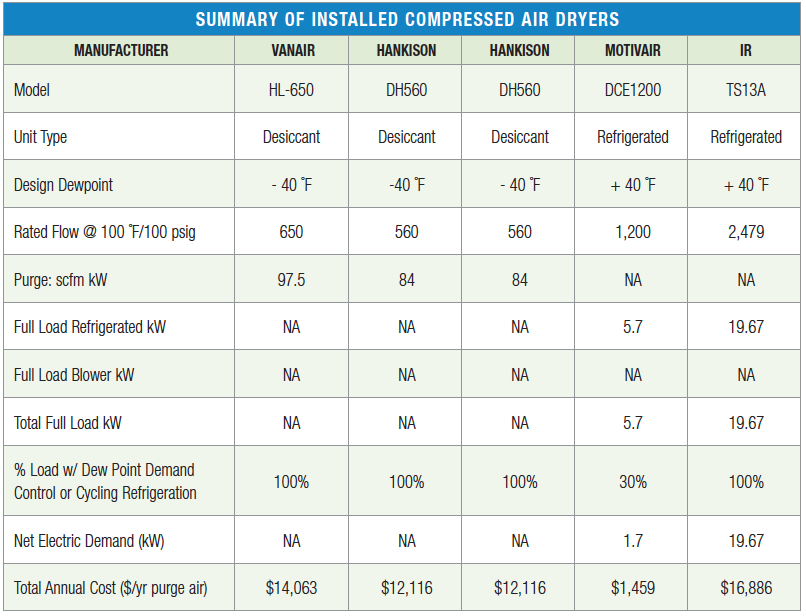 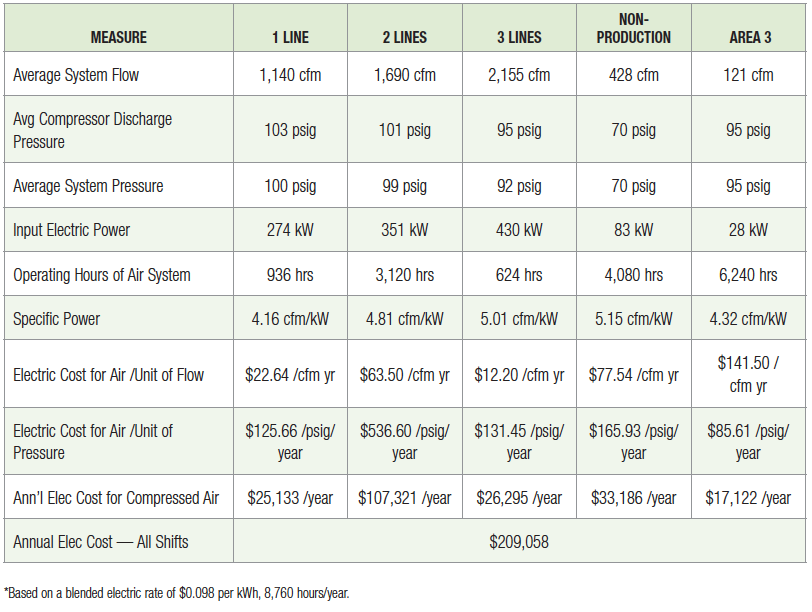 All the air compressors are working reliably and as they were designed to perform. The issue here is the gradual plant expansions have made all the interconnecting air compressors not work together as originally planned. This is a common occurrence in growing factories. Below is a summary of our observations gathered from data logging the individual air compressors.

When One Production Line is Operating:

When Two Production Lines are Operating:

When Three Production Lines are Operating: 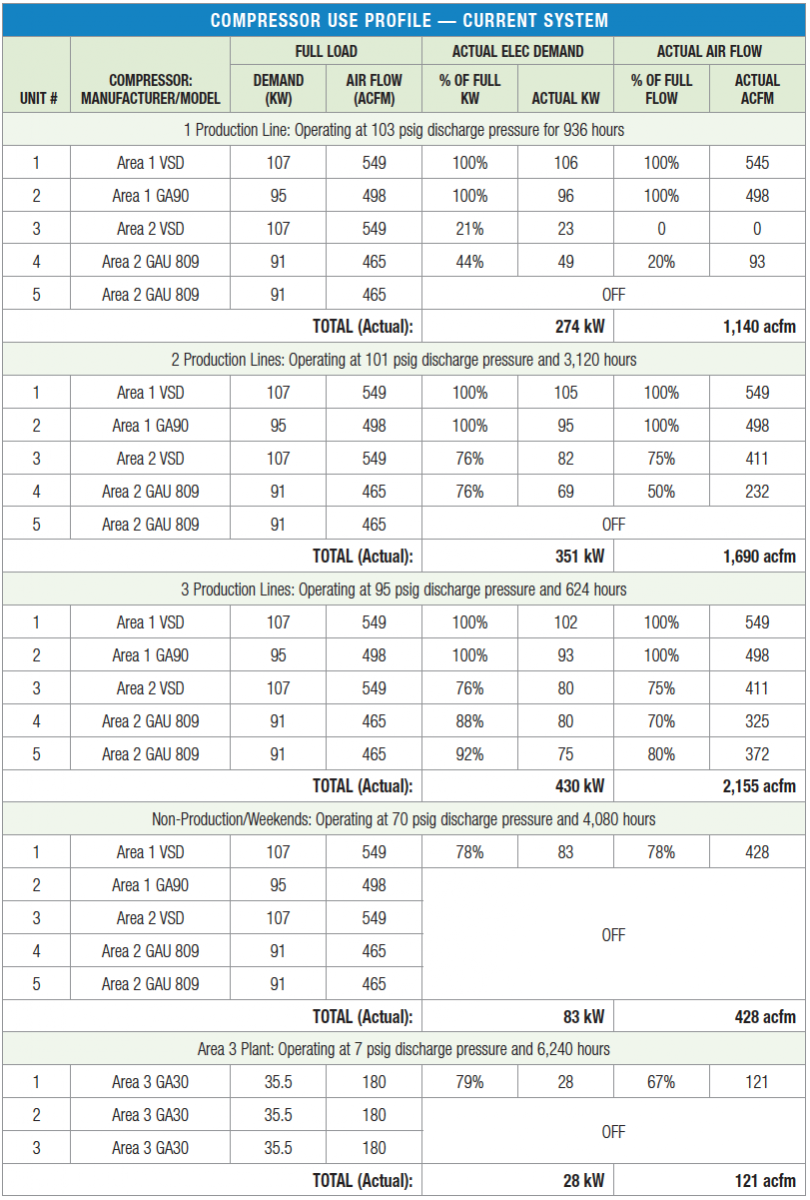 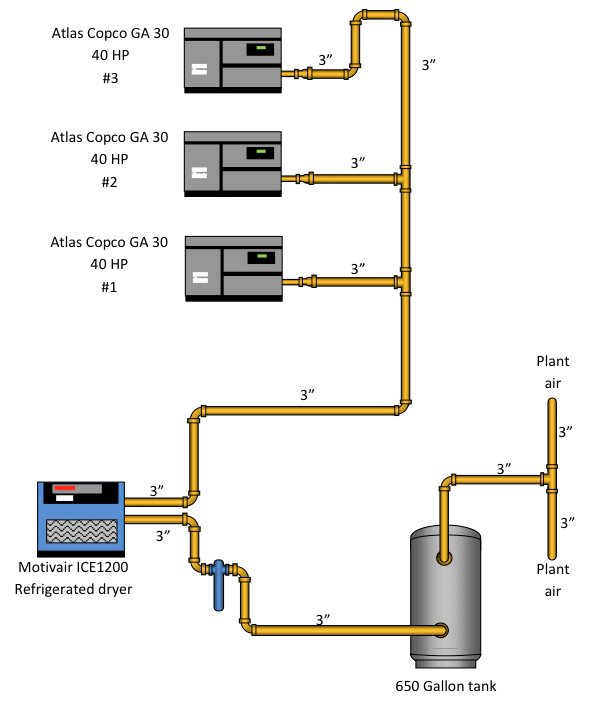