By finding a better way to control and manage its compressed air system, North American Lighting, Paris, Ill., has reduced its total compressed air energy use by 27 percent – and in the process – saves over 1,100,000 kWh/year for a total annual savings of \$91,000. The project also achieved a payback of less than one year. 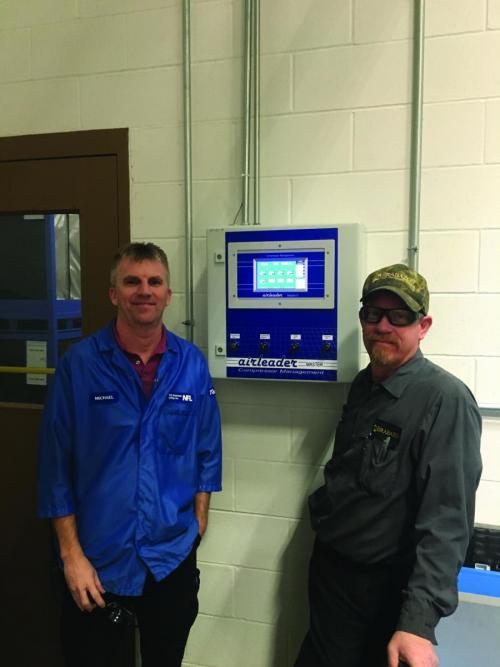 Compressed air is expensive, which is something many hear in the industry. It’s also said that the cost for compressed air is around 0.02 cents per 33 cfm (1m³), but this is far from the truth. There are many factors that come into calculating the cost of compressed air on any specific site that can make this value vary greatly. In particular, how the air compressors are controlled can add significant cost to the operation of a system.

There are a number of methods used to control air compressors, but as systems get larger and more air compressors are added, efficiently controlling the system becomes more difficult. The problem gets even worse when a combination of air compressor sizes, brands, locations and types starts to add complexity to the overall system. Sadly, this is often the reason why many companies stick to one air compressor size, brand or type, despite better options being available or increased operational costs to their system.

In reality, having a variety of sizes and types of air compressors is a good thing for the efficiency of a compressed air system, provided you can control it. For instance, during low demands, users will want to be run their smallest compressor. In moderate demands, they might want to run a large base load air compressor and a small trim air compressor. Ideally, companies will run the air compressors that most closely match the system demands at any given moment. Unfortunately, most controllers on the market can only sequence the order in which air compressors run without selecting the best combination for the current demand. This is what North American Lighting discovered at its plant in Paris, IL.

“At North American Lighting, the two compressor rooms were not able to communicate with each other causing them to run more air compressors than needed,” said Sally Struckman of Brabazon Pump, Compressor and Vacuum. “They were trying to control the plant off the pressure in each holding tank via two pressure flow controllers, but were running more horsepower than they needed. They wanted to save on electricity and improve their system.”

Shown are North American Lighting’s compressor rooms as originally operated without a master controller, which was needed to control the entire system of air compressors – and in the process – save energy. Click here to enlarge.

Michael Westerfield, NAL Maintenance Service Manager, was aware these issues were causing the operation to use more energy than was necessary, but had been unable to find a suitable method of control for the system. That’s when the Brabazon team got involved.

“When we came in North American Lighting told us about some of the issues they were having with their system,” said Struckman. “We took a walk around the plant and noticed we could help manage their compressed air system for them. We told them about the Airleader control system and said we could audit their system and show them a simulation of how their air compressors would run using this master control and how much money they could save.”

Brabazon proposed a supply-side compressed air system survey to identify the issues, establish a baseline of energy use, confirm the flow demand for the plant, identify additional opportunities and establish potential savings.

Data logging equipment was then installed across the site in July 2017 for a period of one week. Once analyzed, the results revealed a number of previously unknown facts about the system as can be seen in Figure 1. Of particular interest was: 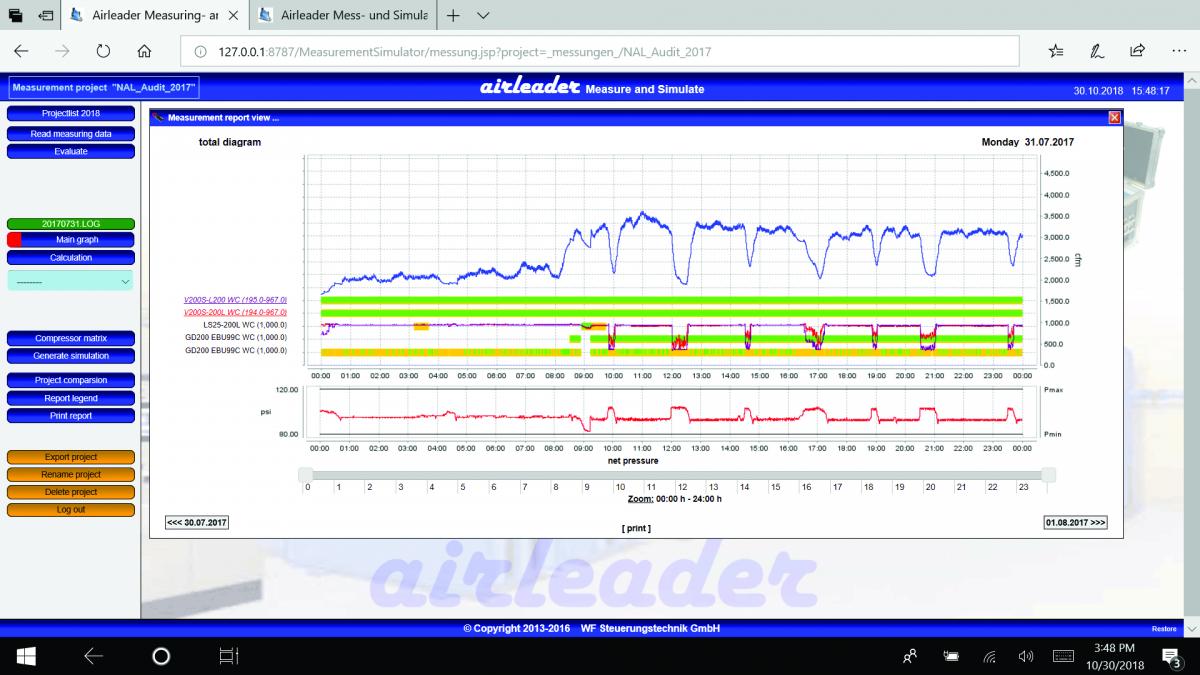 Additionally, Brabazon established a solid baseline for the system operation and costs. As shown in in Figure 2, which captures a one-day period, North American Lighting was spending over \$330,000 per year in compressed air energy. Almost 23% of the total was in unloaded energy use ($75,500/year). In addition, system pressure was fluctuating by 20 psi. 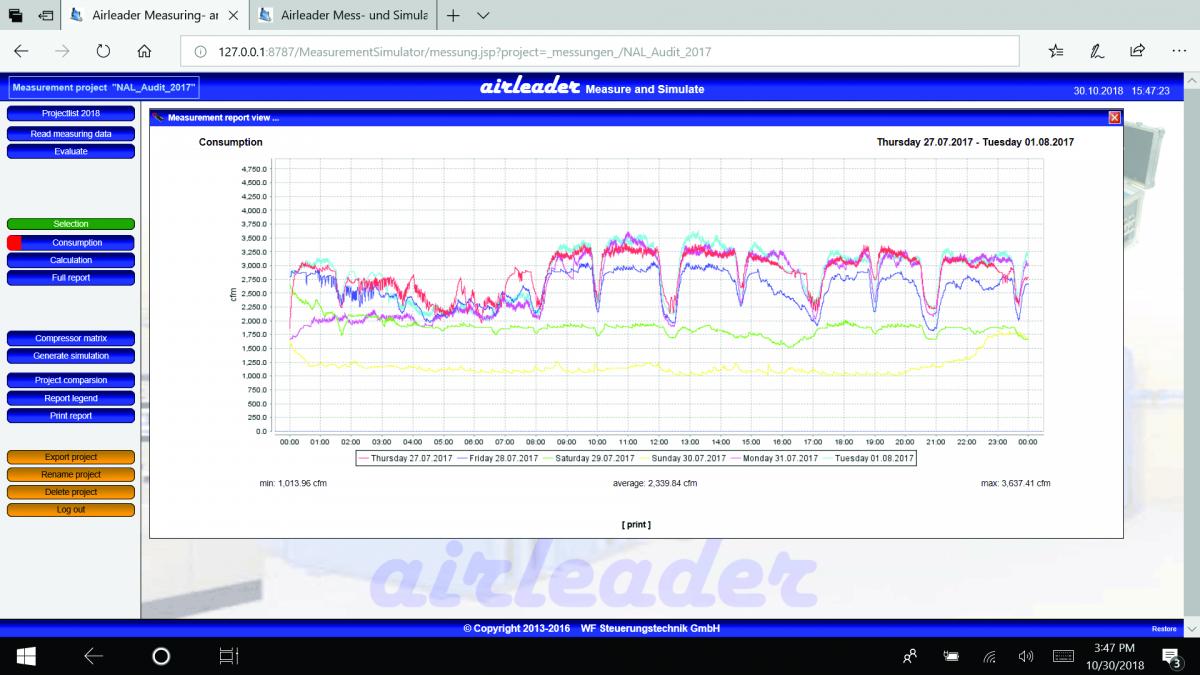 As both NAL and Brabazon had suspected, the wide variation in demand was proving challenging for the existing system to adapt and provide compressed air reliably and efficiently.

“We could see from the data, the problem the customer was having is that they were running too many air compressors at the same time and their large VSDs were running fully loaded instead of trimming,” said Struckman.

The team from Brabazon used Airleader’s simulation software to demonstrate how a master controller could reduce the wasted unloaded energy to less than \$5,000/year, resulting in an estimated saving around \$70,000/year.

“We initially monitored with the Airleader equipment because we liked that it could run a simulated report. We monitored the system for one week and used the data from their data logger in the simulation software,” said Struckman.

Brabazon proposed the use of an Airleader Master II Controller to control the entire system of air compressors. The Master Controller offered a number of advantages because it could:

The Airleader unit, including kW meters on each air compressor, took about four weeks in total to connect to the compressed air system primarily due to the site not wanting to interrupt production and the need for a constant supply of air.

Once installed it, the controller monitored the system for a few weeks and established an up-to-date baseline before taking full control over the compressed air network. By Mid-March 2018, it switched to full automatic control, allowing the plant to immediately notice improvements in the reliability of the compressed air supply.

Ongoing results are continuously updated through the software. The table below shows a summary of the weekly results after several months of operation using the new controller. On the right is the total kWh consumption for each week. The red bar depicts energy consumption during the audit in July 2017. The orange bars show the period prior to the Master Controller taking control. The blue bars show the kWh for each week. The line graph illustrates annualized kWh consumption throughout all three time periods. 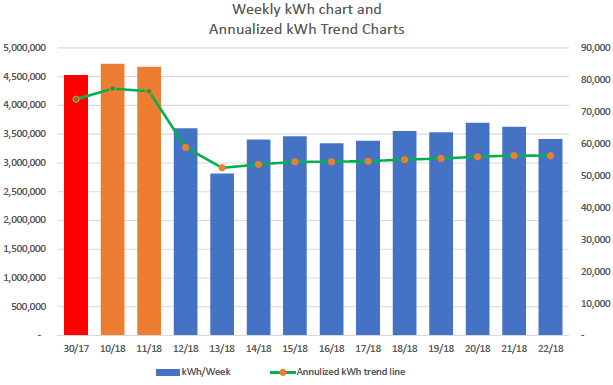 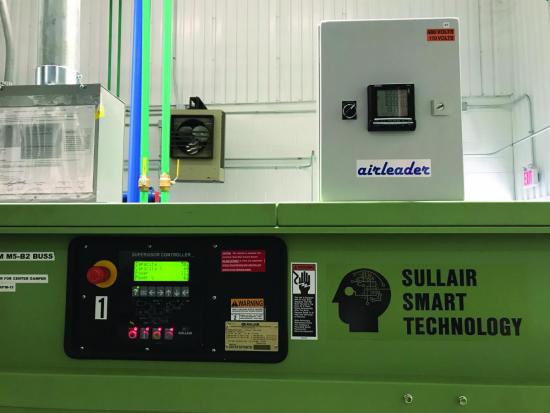 An Airleader control module installed on an air compressor at North American Lighting.

According to Hoetzel, the control module uses the existing air compressor inputs, and does not need to interfere with the existing control panel. If needed, the air compressor can immediately be switched back to manual control. The module provides the air compressor with information from the master controller on when to start, load and shutdown, or in the case of a VSD, the system target pressure.

“We use a special adaptive algorithm that matches the running air compressors with system demand. The master controller will select the best compressor combination, which in turn reduces or eliminates unloaded running time and ensures the most efficient combination of air compressors is being utilized at any given moment,” Hoetzel said. “This reduces the wasted energy of the system, the running hours of the air compressors and avoids the sequencing issues found with other controller. It’s the elimination of waste that ultimately saves the customer money.”

“And because our algorithm is adaptive, as North American Lighting makes improvements to their demand side of the system, the controller will adjust which air compressors to run to ensure they maximize any future potential savings, which of course, they will be able to see as it happens through the Web Server that is part of each master controller.”

Since the project has been completed, North American Lighting has saved 27 percent of the total energy use of its compressed air system, which is over 1,100,000 kWh/year for a total saving of \$91,000/year. In addition, it resulted in a total project a payback of less than one year.

As seen by North American Lighting, having a complete picture of how a compressed air system operates at any given point in time through detailed monitoring, as well as having a robust control strategy in place, makes it possible to significantly reduce waste energy consumed by a system. It also improves system reliability and performance.

Warwick Rampley has performed a wide variety of compressed air system audits in industries from food and beverage to pharmaceutical, automotive, packaging and semiconductor industries to name a few. Recently he founded the Compressed Air Alliance, through which he has joined forces with Airleader to bring more efficient compressor control to the Asian market. For more information, contact Warwick Rampley, email: warwick@compressedairalliance.com, or LinkedIn: www.linkedin.com/in/warwickrampley/