To address a mandate for cutting operations energy usage at facilities by 25 percent without major capital expenditures, a major manufacturing company set its sites on better control of its compressed air systems.  The project, implemented at 10 manufacturing plants over the course of three years, saves the company \$977,093 annually in energy costs – and was completed with zero out-of-pocket costs. 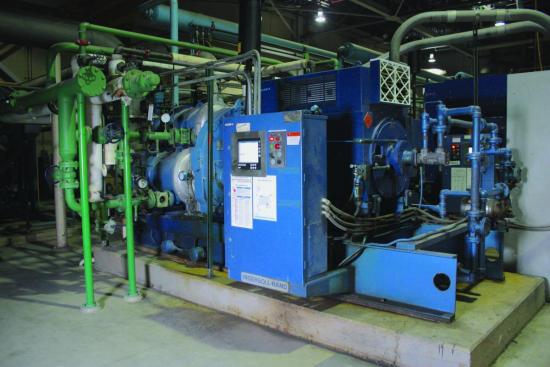 An Ingersoll Rand centrifugal air compressor equipped with a Bay Controls Control System at one of the manufacturer’s 10 plants.

As with many large operations, the manufacturer views compressed air as a major energy user and cost center. The company uses compressed air at production facilities in North America for a wide variety of end uses, such as paint spraying, material handling, and equipment operation (stamping presses, hand tools, etc.).

Knowing compressed air would play a key role in its energy-savings initiative, decision makers at the manufacturer opted to focus on maximizing the efficiency of their compressed air assets through a combination of controls retrofits, system networking and scheduling, and a monitoring solution powered by hardware from Bay Controls and Tridium Niagara.

To minimize upfront project costs, Bay Controls implemented the project as an energy services agreement. This approach uses the cost savings generated by the compressed air system optimization project to finance it over the term of the agreement with zero out-of-pocket costs to the customer.

In the initial phase of the project, the team conducted a thorough assessment of the compressed air systems to establish a baseline for system performance, energy consumption, and energy costs.

Although the layout differs from plant to plant, all of the facilities involved in the compressed air system controls project utilize a plant air configuration where air compressors in one or more compressor rooms distribute air throughout the plant.

While a typical assessment or audit of this scale – 12 plants spread throughout the United States, Canada, and Mexico – would be enormously expensive and take the better part of a year to complete, the Bay Controls team conducted a comprehensive analysis at no cost and in very little time using BayWatch, the company’s cloud-based monitoring, alerting, and analysis platform for industrial compressed air systems. The manufacturer had used the platform for years before the decision to leverage it fully to optimize its compressed air system on a larger scale.

BayWatch gives plants the ability to record data at an individual monitoring point level, such as discharge pressure, motor power, blow-off valve position, loaded/unloaded, etc., for every air compressor in each plant. Using the platform’s historical data logging and analytical capabilities, the team was able to thoroughly analyze a year’s worth of historical compressed air system operating data for each of the plants in a matter of weeks. 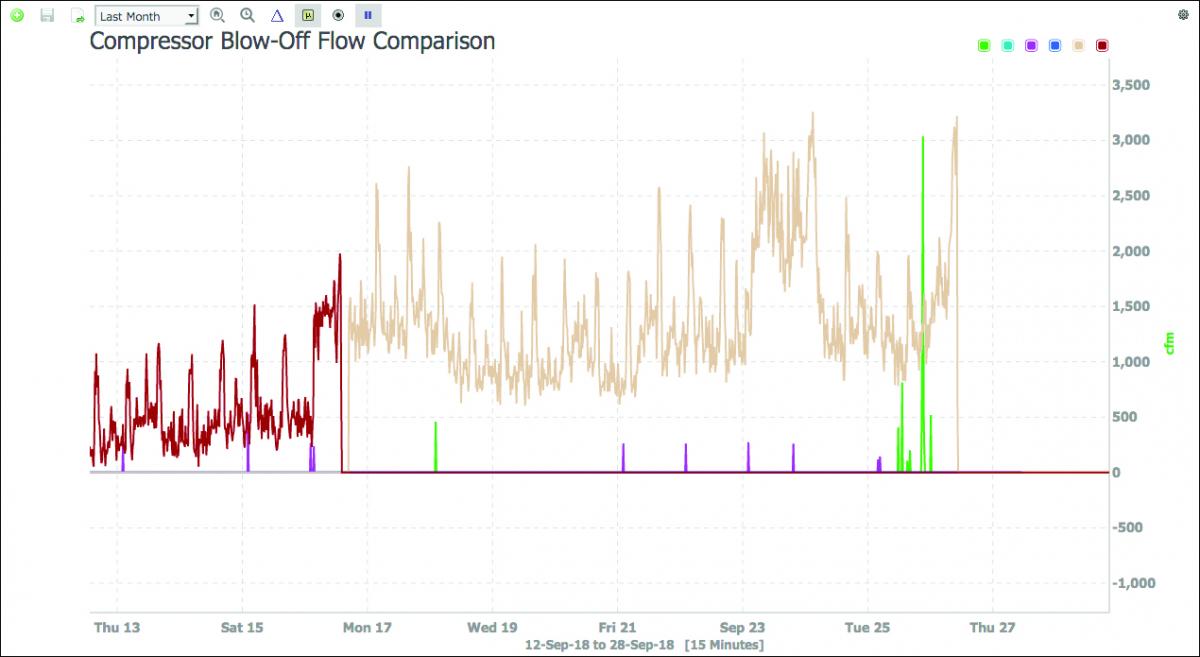 Above are blow-off flow readings displayed on the BayWatch platform for six centrifugal air compressors.  Each color represents an air compressor. Blow-off for two air compressors exceeds 500 cfm as indicated by the maroon and beige lines, indicating the need to surge-tune the units. The remaining air compressors do not need attention since they are consistently showing zero blow-off, except for isolated instances with one air compressor as shown by the single green line.

Specifically, the team was able to efficiently assess the historical operation and performance of each individual air compressor and each plant air system to identify savings opportunities in the following areas:

To determine the potential for savings, the team looked primarily at the following historical data points:

By utilizing the reporting tools built into the platform, the team also quickly sifted through the plants’ historical operating data and identified those plants where one or more of the following trends were apparent:

From there, they calculated the potential energy and energy cost savings for each of the 12 plants in the following categories:

Once the potential savings for all 12 plants were annualized, the team determined only 10 of the 12 plants would achieve sufficient savings to offset the total project cost within the required payback period.

Based on the analysis results, Bay Controls determined the most cost-effective savings measures for the project would be the following:

In addition to the energy-saving upgrades, the other major component of the project was the integration of the plants’ compressed air systems onto the Tridium Niagara platform. This was necessary since the manufacturer had standardized on the Niagara platform for centrally tracking utility (gas and electric) data and wanted to integrate the compressed air monitoring and data capture abilities of BayWatch into their existing Tridium platform.

During the course of the next 24 months, the team completed the UIM retrofits and conducted compressed air network surge tuning at the 10 plants in North America.

All of the plants involved had existing Bay Controls air compressor controllers in place, but in many cases, the UIMs were outdated and functioning poorly. The UIMs serve as the touchscreen interface for localized control by plant operators. All of the old UIMs were replaced with the latest version to ensure that plant personnel could effectively monitor and operate the air compressors and to enable the Bay Controls team to surge-tune them.

In all, Bay Controls engineers surge tested and tuned 56 centrifugal air compressors and configured each plant’s air compressor network to most efficiently meet plant demand for air as observed from the historical performance data.

Bay Controls air compressor controllers feature advanced surge protection that simultaneously protects the unit from damaging surge and maximizes their turn down range, which is the ability to reduce flow relative to their rated design flow. The controllers utilize air compressor-specific surge curves, which are defined through the surge testing and tuning process.

During surge testing and tuning, a Bay Controls engineer runs the air compressor at a variety of operating conditions intended to mirror its behavior as it approaches its natural surge curve. At each point, the controller logs the conditions and uses them to create its own surge threshold, which effectively serves as a new surge curve with a safety margin built into it for that particular air compressor.

The table above shows the 60 compressors that were part of the project. The air compressors ranged from 300 hp to 3,000 hp.

In addition to surge testing and tuning, the team developed a new Tridium Niagara driver/connection protocol that would allow the existing Bay controllers to effectively communicate with the manufacturer’s Niagara network, which is used for utility monitoring and data logging.

After developing the driver, all Bay compressor controllers were updated with new software that enabled them to communicate with the Tridium networks already in place. From there, Bay Controls Tridium-certified system integrators began the process of connecting all of the plants’ compressed air networks and controllers to each plant’s existing Tridium network utilizing the Bay-Controls-built Tridium driver.

Based on the savings analysis completed by Bay Controls and the improved energy performance of project plants to-date, the manufacturing operation has reduced its compressed air energy costs by \$977,093 annually across all 10 plants involved in the project.

In addition to realizing significant energy savings, the manufacturer gained the ability to centrally (and remotely) monitor and control the compressed air systems in the 10 plants via the Niagara/Bay Controls integration.

With the migration of the compressed air data and analysis to Niagara, the company can now see all of its utility data (water, gas, electric) side by side with compressed air metrics. As such, decision makers can easily monitor and benchmark plant performance from a total efficiency and energy perspective.

For 35 years, Bay Controls has been providing control and monitoring solutions to a broad range of industrial, commercial, and government customers in the U.S. and 60+ countries across the world. The Bay Controls suite of cloud-ready hardware, and a state-of-the-art, cloud-based analytics platform deliver the actionable intelligence companies need to make smart, data-driven decisions about compressed air system operations, energy savings, and maintenance. All photos courtesy of Bay Controls. For more information about Bay Controls, visit www.baycontrols.com.

Stephen Parry is the West Coast Business Development Manager for Bay Controls. In his role, he works with customers in the Western United States to implement projects built around the Bay Controls suite of products, including compressor controls retrofits, monitoring solutions, and HVAC integration. For more information, please contact Stephen Parry, at Stephen.parry@baycontrols.com, or call 419-891-4390.