A global glass container manufacturer in the Netherlands leaves no stone unturned when it comes to product quality, plant uptime and energy conservation. That’s why it upgraded its compressed air system used to produce more than one billion glass bottles and containers per year.

To improve the delivery of compressed air at the plant, which is supplied by low-pressure and high-pressure compressed air systems, the manufacturer took an important first step by using airflow meters to monitor and measure the performance of both systems. Subsequent planning based on actionable data led to a unique compressed air system upgrade that increases the plant’s ability to maintain peak production of high quality glass bottles and containers at all times – while saving \$150,000 per year in energy costs. The project also delivered a payback of less than two years. 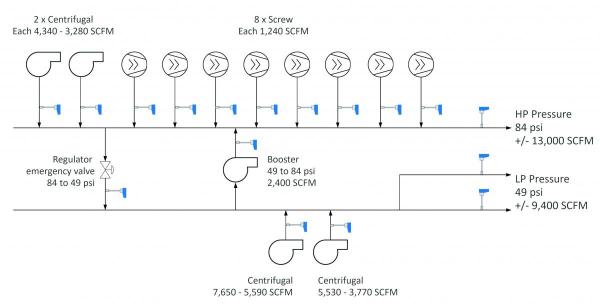 The Dutch division of this multinational company, which is one of the top producers of glass containers in the world, operates several glass manufacturing plants in the Netherlands. The main plant that needed to address its compressed air system operates twenty four hours per day, seven days a week to produce 1.3 billion glass beer bottles per year. The pristine bottles are shipped to leading beer brands and small breweries in the Netherlands and elsewhere throughout the world. The facility also supplies compressed air to an adjacent glass plant, which makes wine glasses.

The plant’s bottling process begins with the hot-end process where furnaces convert glass feedstock into molten glass. At temperatures of up to 1,200oF, the glass enters a plastic stage so it can be cut into a cylindrical gobs, which are eventually formed into glass bottles and other containers. An automated blow-and-blow process involving multiple IS machines is then used to form the beer bottles.

Within each IS machine, compressed air is used to force the gob into a mold, which converts it into a “parison,” which is the name of the initial shape of the beer bottle neck and the bottle itself. After the parison is formed, it is flipped to the other side of the machine where valves open to allow compressed air to blow the parison into the desired bottle shape. Once cooled, the bottle is automatically removed from the IS machines and conveyed to the cold-end process of the factory where the bottles are inspected and packaged.

The plant’s compressed air system is comprised of two complete systems. A low-pressure system delivers 9,400 scfm of air at stable 49 psi, while the high-pressure system provides up to 13,000 scfm of compressed air at 84 psi. Both have been updated throughout the years with a variety of equipment to enable the plant to keep pace with steady growth.

The critical nature of glass blowing requires the low-pressure system to maintain stable pressure of 49 psi with a deviation of plus or minus 0.7 psi without fail. Otherwise, too much air could cause significant problems, such as unwanted air bubbles in the glass. Too little air pressure by the slightest of margins would not allow glass bottles to properly form within the IS molding machines.

The high-pressure system powers the IS molding machines, as well as the plant’s conveyors and production machines used in the plant’s cold-end packaging operation. Additionally, it supplies air used for the production of wine glasses and vegetable jars in the adjacent glass plant.

The glass manufacturing facility always strove to conserve energy based on its own sustainability goals and those of its customers. A focus on energy conservation drove regular updates to the compressed air system, such as the use of an eight hp blower to provide air to an area of the plant that only needed low-pressure air. The blower, which replaced the need for the compressed air system to provide the air, resulted in energy savings.

Despite ongoing improvements to the system, however, decision-makers knew they could do more to reduce the electrical power consumption of the operation’s compressed air system, sparking the need to more closely monitor and measure the efficiency of the entire system. Yet first and foremost any changes to the system also needed to address the need of optimal plant uptime. 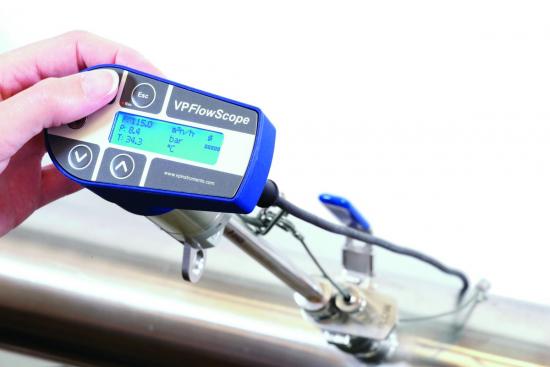 Further analysis of the low-pressure system showed the system needed attention. Each air compressor operated independently and without load sharing based on input from a single pressure transmitter. As such, one air compressor operated at full load, while the other unit ran at minimum load to provide air needed, resulting in blow-off and wasted energy to prevent the air compressors from entering a surge condition.

An assessment of the high pressure system also revealed additional energy waste. The assessment during one month of normal operation demonstrated a significant number of unloaded hours and start/stops on two of the rotary screw air compressors on the high-pressure system.

Based on the assessment, the glass container manufacturer partnered with Stork (https://www.stork.com/en/) to improve the performance of the compressed air system. Stork, which is a division of the worldwide engineering firm, Flour Corporation, provides brand-independent turbo air compressor air compressor services, including inspection, repair, maintenance, modification and engineering.

To address the critical need to maintain pressure in the low-pressure system at 49 psi – and at the same time – reduce energy waste associated with the compressed air system, Stork installed a single-stage, 200 hp centrifugal booster air compressor rated to deliver up to 2,400 scfm at 84 psi. It also installed a master controller to allow the compressed air system to work together as a single cohesive network using data supplied by airflow meters and controllers.

The new master controller monitors the entire compressed air system and determines where the limits are in the different air compressors and automatically adjusts them to efficiently provide air to both processes, while allowing for stable pressure on the low-pressure system. The booster air compressor, meanwhile, plays an equally vital role in system stability and reliability.

The recent compressed air system upgrade allowed the global glass bottling and container manufacturing plant to achieve its No. 1 goal: To ensure a reliable and stable supply of compressed air to its glass-blowing operation – which in turn – further strengthens its ability to profitably produce high quality glass bottles and containers with maximum plant uptime. The upgrade has also allowed the plant to meet an equally important goal of saving energy and costs. To date, the plant saves \$150,000 per year on its energy bill thanks to the newly designed system. The project also delivered a payback of less than two years.

All photos courtesy of VPInstruments and Stork.