The Effects of Ambient Temperature on Centrifugal Air Compressor Performance


“I don’t think my air compressors are making the air they’re supposed to, especially No. 3.”

Those were the words of the maintenance manager as we sat talking to him in his office. We were at a plant in Arkansas and had spent the morning installing data-logging equipment on his compressed air system.

It was early summer, the air compressors were above the production floor on a mezzanine, and temperatures were heating up both outdoors and indoors. The compressed air system was comprised of three 500-horsepower centrifugal air compressors, and one 350-horsepower variable speed drive oil-free rotary screw air compressor.

All the air compressor intakes were inside, so ambient air on the mezzanine — not outside air — was being compressed. The normal operational configuration was to base load two centrifugal units, keep one on standby, and trim the plant with the rotary screw variable speed drive air compressor. It did work, but oftentimes all four air compressors would have to run to meet plant demand, leaving the system with no backup.

That morning, while installing power-monitoring equipment and a combination pressure transducer/mass flow meter, we noticed it was quite warm on the mezzanine. After installing the equipment, we had taken a lunch break, then returned to the facility in the early afternoon to meet with plant personnel to discuss concerns, as well as to check on our equipment to ensure all was functioning properly before we departed. While performing checks on the logging equipment, ambient temperatures were also taken at the inlet of each air compressor. It was a typical summer day in Arkansas — sunny with outside temperatures over 90 o F. It was a good day to check how hot the air compressor area gets.

It turns out it got extremely hot! 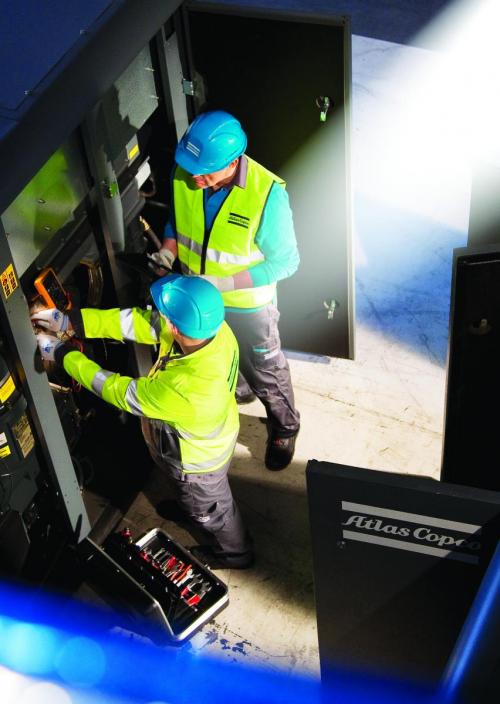 It was believed two centrifugal units would provide all of the air required for much of the time, with the rotary screw unit occasionally trimming the plant during the periods of highest demand (a best-practice design, by the way).

When it was hot outside, it turned out that the rotary screw air compressor was required to run nearly all the time, and oftentimes the third centrifugal unit would also run. This wasn’t what was meant to be happening, so we started to investigate how much air the facility was using, and how well the air compressors were performing.

So just how much did air compressor performance drop due to the high ambient temperatures and elevated discharge pressure?

Shown in Figure 1 is a curve showing air compressor performance at a 95 oF inlet temperature and 110 psig discharge pressure: 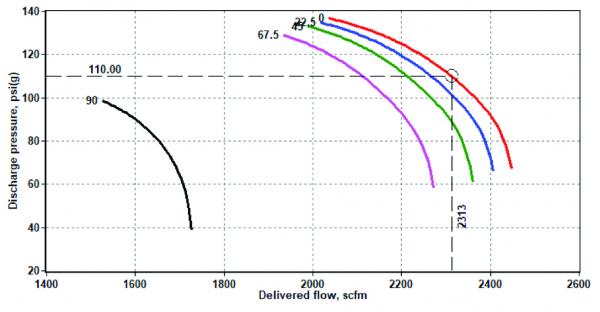 The four colored lines represent the operating curves of the unit at various inlet guide vane positions, by guide vane angle. The red line is the flow curve with the inlet valve 100% open (0 degrees and 0% throttled). The air compressor is rated for 2,313 scfm maximum delivery at these operating conditions. This is the curve that was utilized to initially size the air compressors and calculate load on them.

Figure 2 shows the curve for the same air compressor at 119 oF inlet temperature and 110 psig discharge pressure: 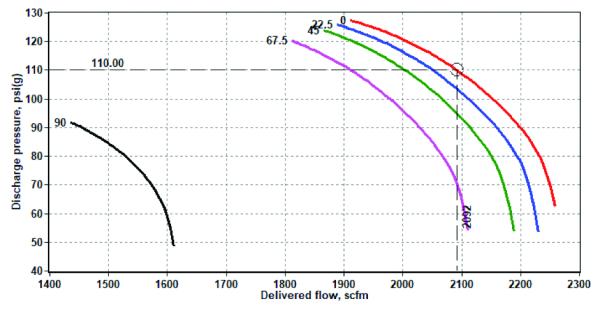 But the customer was operating the air compressors at a higher pressure than 110 psig. Figure 3 is the curve adjusted for the actual 118 psig discharge pressure. 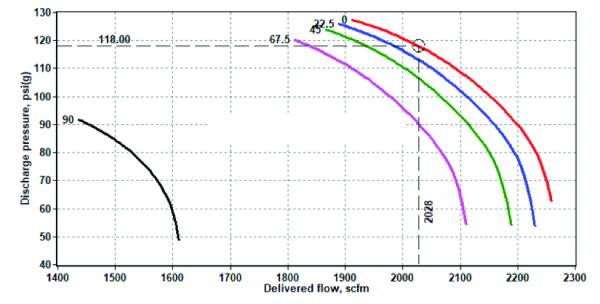 As seen, delivered flow has been reduced to 2,028 scfm, a loss from the original curve of nearly 300 scfm. Perhaps just as bad, the pressure rise to surge (the pressure difference between operating pressure and surge pressure) has been reduced from the original 28 psig to 10 psig. This leaves the air compressor almost no room to turn down (turndown is the percentage that a centrifugal air compressor can operate at partial load, accomplished by throttling the inlet valve), rendering it essentially a load/unload unit. This caused further difficulties with air system operations.

It didn’t end there, though. The centrifugal air compressors have a safety feature designed to protect the drive motors. As winding temperature rises, the amperage rating of a motor will drop. If ambient temperature exceeds the motor nameplate amperage temperature rating, the controller will limit the maximum inlet guide vane position to prevent overloading the motor. This further reduces maximum air compressor flow output and pressure rise to surge.

Once the data was collected and analyzed, it was discovered that, indeed, Air Compressor No. 3 was running as a load/unload unit, with only a three psig rise from the load to the unload point. Air Compressor No. 3 spent much of the logged period in an unloaded condition while air compressors No. 2 and No. 4 were running fully loaded, with the rotary-screw unit trimming. This was extremely wasteful.

So why didn’t Air Compressor No. 3 simply unload and shut down after running for the minimum unloaded time?

Part of the problem was back to the built-in safety feature to protect the drive motor. In this case, it is the minimum run time feature. Most of the wear on a large motor occurs during start-up. The heat built up from the inrush current needs to dissipate to the level of normal motor operational temperature before the motor shuts off. Once the motor does shut off, it needs to cool further in order to allow for the temperature spike that will occur the next time it starts.

In this case, Air Compressor No. 3 needed to run in an unloaded state for a longer period of time than normal due to the high ambient temperatures. While running unloaded in “cool down,” a slight drop in pressure would cause it to load up. The sudden addition of 2,000 scfm to the system would cause an immediate pressure rise greater than three psig, during which Air Compressor No. 3 would unload. This restarted the countdown for the unloaded run time.

Such an event happened often enough that the air compressor rarely got the chance to shut down, running in an unloaded condition almost constantly. When the unit did shut down, it would restart after a short period of time once another small decrease in plant pressure would occur.

Obviously, the corrective action that would most benefit air compressor performance in this instance is to reduce temperatures at the compressor inlets. Ambient temperatures at the drive motors must also be reduced both to improve motor reliability, and to further enhance performance. Another recommendation was to reduce discharge pressure of the air compressors to the minimum required for proper production-equipment operation.

Proper air turnover in the air compressor room could reduce ambient temperatures around the drive motors by 10 oF to 15 oF, reducing motor operating temperatures as well as eliminating the Elektronikon controller’s inlet valve throttling to protect the drive motor. This would increase flow capacity by several more percentage points, allowing the air compressors to run more closely to the original flow curve. It would also create more pressure rise to surge, allowing the units more turndown before unloading. This would eliminate the load/unload operating condition observed on Compressor No. 3.

This case study illustrates just how critical inlet and ambient operating temperatures are to centrifugal air compressor performance. When designing a compressed air system, it is necessary to understand not only the pressure and flow requirements of the production facility, but also the conditions under which the units will operate. Communication between the end user, system designer, and equipment supplier are critical to ensure proper system operation.

The end goal is always to design, install, and operate a compressed air system that meets the end user’s flow and pressure requirements, provides adequate redundancy in case of a casualty or to perform maintenance, and maximizes reliability. Ambient temperatures are an often overlooked but a critical building block in designing such a system.

As an Atlas Copco Centrifugal Auditor, Brett Griffin has worked with customers across the United States when it comes to compressed air audits and energy management studies. He specializes in large air installations and centrifugal air compressors.

Great ideas accelerate innovation. At Atlas Copco, we have been turning industrial ideas into business-critical benefits since 1873. Our passionate people, expertise and service bring sustainable value to industries everywhere. Atlas Copco is based in Stockholm, Sweden, with customers in more than 180 countries and about 37,000 employees. In 2018, revenues were BSEK 95, approximately 10 BUSD. Atlas Copco Compressor Technique partners with customers to turn industrial ideas into smart, connected air and gas solutions and leading-edge compressed air technology. By listening to our customers and knowing their needs, we deliver value and innovate with the future in mind.

All photos courtesy of Atlas Copco.