Based in Salina, Kansas, Great Plains has carved a global reputation for producing world-class seeding equipment since it first opened its doors in 1976. Great Plains manufactures a range of products from grain drills and planters, to compact drills and tillage equipment. They have established an international business built on expertise, knowledge and a commitment to producing products meeting the rigorous demands of the agricultural sector.

Great Plains utilizes compressed air in their production lines with pneumatics, cylinders and actuators. They take raw steel materials, and weld and fabricate frames for the plows and other equipment, and then assemble them. Great Plains also uses compressed air for shot peening in their facility. 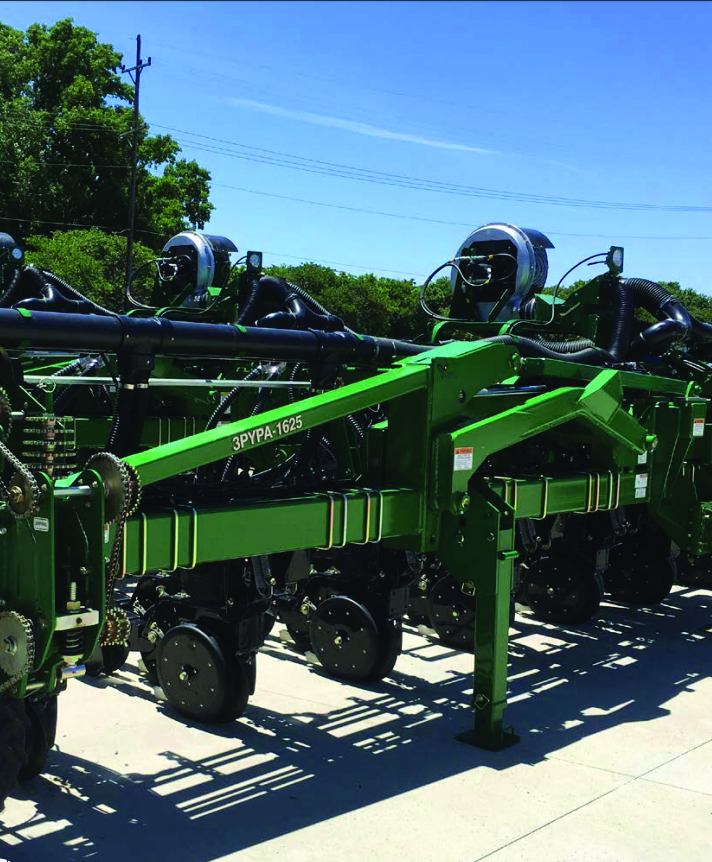 Great Plains manufactures a range of products from grain drills and planters, to compact drills and tillage equipment.

Air Capital Equipment, one of EnergAir’s key distributors in the Mid-West, conducted a comprehensive audit for Great Plains.  As a result, Great Plains identified inefficiencies between its five air compressor rooms serving the welding units, blast booths and air tools division, incurring significant cost and generating unnecessary carbon emissions. Energair was called in to determine how Great Plains could optimize its performance, save money and increase its sustainability credentials.

A 360° Approach at Great Plains

Great Plains started as a smaller facility with smaller air compressors, and they added compressors as they expanded tying the whole system together as they went on. Their facility consists of five buildings on a campus about a quarter of a mile in size. Each of the buildings houses one of the five Sullair compressors. All of these compressors also had a refrigerated dryer, except for the 150 hp paint line compressor, which had a heated desiccant dryer. Before the audit, the compressor in the paint line ran 24/7, whether they were painting or not, and the machine they needed to run as the dedicated trim was at the new building by itself in the opposite direction of the main plant. 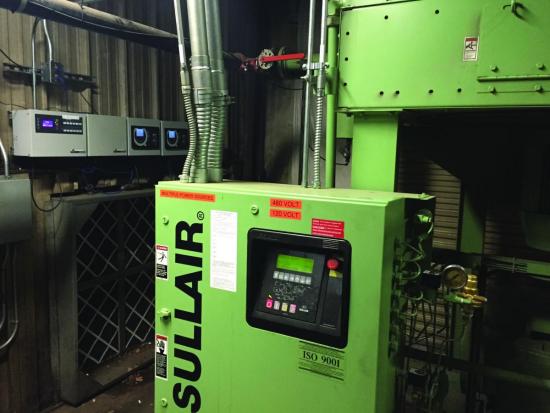 Each of the five buildings at Great Plains housed a Sullair compressor.

Below is a brief summary of the five Sullair air compressors running prior to Energair System and piping modifications at Great Plains as observed over a typical production day:

Initially, on request of the customer, the pressure band of the master controller had been set up between 107 and 117 psi. However, after the commissioning, Great Plains was advised to keep lowering the pressure through the web pages of the TX communication module, or directly on the master controller HMI. Keeping in mind, every 1 psi pressure drop results in an additional 0.5% energy/cost savings. After two months, the company reduced its pressure band to 96 psi delivering an additional energy reduction of 5.5%.

Great Plains always knew their piping was inadequate, but learned the extent of it when they began monitoring the pressure readings in their plant on the TX Cyber Console web pages. They noticed the Sullair V250S-250H was frequently running at a pressure higher than 120 psi to maintain 101 psi target pressure near the Paint area in Building S1. Considering running a compressor at higher pressure than required is a waste of energy (0.5% per 1 PSI), we recommended the customer to improve their piping. Initially, piping was from Building S1 to S7 then to S2 and S5.

In November/December of 2015, a 4” pipe was installed between Building S1 and S5 to close the loop as we advised. This new 4” pipe runs directly to the main plant near the main usage point from the newest facility, 600 ft. underneath the building. As a result of this improved piping, the Sullair V250S-250H is now running at 104 psi to maintain 101 psi target pressure in the system. This 20 psi operating pressure reduction on the Sullair V250S-250H provides an additional energy reduction of 10% (on this variable speed compressor only), estimated to be 134,000 kWh savings or \$4,022 savings per year. Cost to install the additional pipe was \$8,000, so return on investment is two years.

“We knew Great Plains was often running more compressors than needed, and had potential piping issues. Initially, we advised them to manually shutdown compressors during low air demand periods while we worked towards a complete systems control and piping modifications solution,” said Marc McGee, Air Capital Equipment’s vice president. “Once the Metacentre control system was implemented, it was easy to see the energy savings realized and the potential for further savings by implementing the piping modifications recommended through the visualization package. There is no doubt that the installation of Metacentre has led to the system running significantly more efficient.” 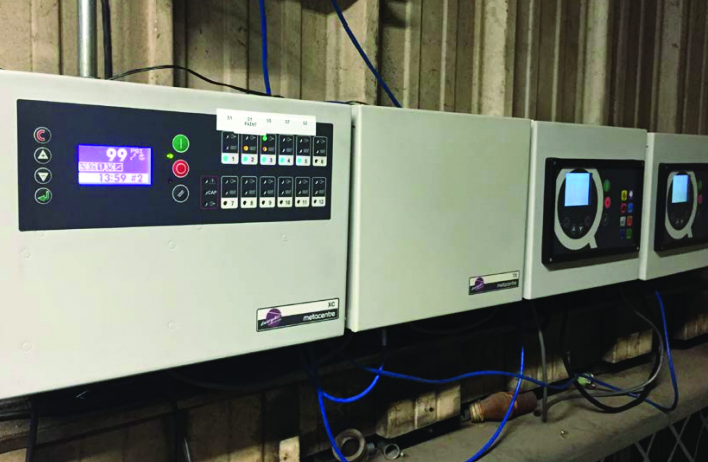 After the commissioning of the Metacentre XC, the pressure band was maintained within 10 psi (vs. 25 psi before).

Energair’s Metacentre XC product, the renowned compressor and vacuum system range of parent company CMC, was identified as an ideal solution. It was installed in a cost-effective way, using the customer’s existing Ethernet network (instead of having to pull cables in between all compressor rooms) to establish communication between the master controller and compressors.

In order to meet minimum pressure requirements in all areas of the plant, it was decided to install multiple pressure sensors where pressure was critical. This being in the forklift shop, paint line and at the end of the piping near the VFD compressor. After the commissioning of the Metacentre XC, the pressure band was maintained within 10 psi (vs. 25 psi before). The master controller also intelligently and efficiently controls the compressors in the five rooms by continuously matching output to air demand. The XC master controller utilizes the trim capability of the Sullair VFD (V250S-250H) to maintain a target system pressure, while running the fixed speed compressors in tandem fully loaded. As a result, non-productive energy (energy consumption while running unloaded) has been reduced to a minimum and compressors are only running when needed.

The Metacentre TX communication module was installed to remotely visualize and analyze the compressed air system over TCP/IP. It then sends the customer, and Air Capital Equipment service personnel, alert messages in case of system and compressor issues. 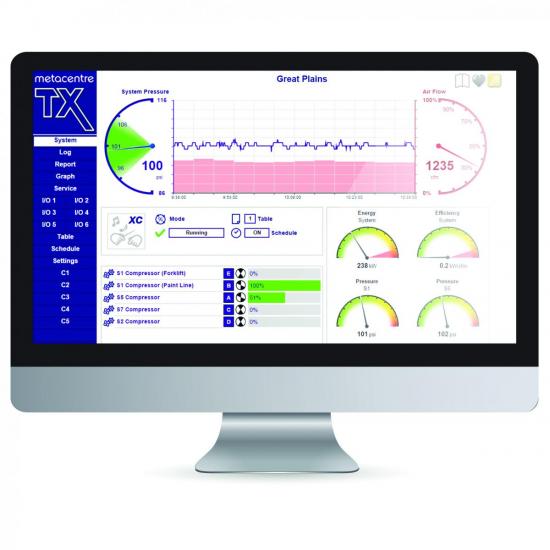 The Metacentre™ XC has the capability to monitor up to two remote pressures from compatible compressor controllers.

Compressors can be assigned one of three “zones.” The Metacentre™ XC will always attempt to balance utilization across the zones to maintain, as near possible, an equal number of utilized compressors in each zone. This function is intended for installations with multiple compressor locations. In some instances, large pressure differentials can exist in remote areas of an air distribution network if generation is concentrated in one area. The aim of the ‘zone’ function is to facilitate a balanced pressure across a site air network by ensuring air generation is distributed.

“Initially, we just wanted a system to monitor air demand flow, pressure and compressor status, however we quickly realized that the Metacentre master controller does way more than that,” said Steve Boling, Great Plains Manufacturing’s maintenance manager at AG Division.

Since the installation of Metacentre XC, Great Plains has:

Boling also said, “Since we had Metacentre installed we don’t have to intervene at all. Through the remote visualization web pages, we simply monitor the system a couple of times a week to ensure that all compressors are still available and that we’re still running at optimum efficiency.”

Since the installation, Great Plains has been working on repairing air leaks, minimizing inappropriate uses, such as floor sweeping, while continuing to lower the plant pressure. Through the visualization package they can instantly see KW reductions, and graphically trend these reductions over time. They are currently operating the majority of the time with the one V250S-250H unit and base loading occasionally with the LS16-75H or LS200S-150H during higher demand periods.