This paper plant currently spends an estimated \$307,337 annually on energy to operate the compressed air system at its plant located in the southeastern U.S. This figure will increase as electric rates rise from their current average of 5.26 cents per kWh.

Based on the air system operating 8,760 hours per year, the group of projects recommended below could reduce these energy costs by an estimated \$170,718 or 56% of current use. In addition, these projects will allow the plant to have a back-up compressor and help eliminate the rental expenditure for compressor maintenance or downtime.

Estimated costs for completing the recommended projects total \$307,600. This figure represents a simple payback period of 21.6 months. Savings estimates depend, in part, upon the capabilities of the compressor capacity control system in order to translate reductions in air use into lowered electric costs. The current system is not equipped with this type of compressor unloading controls when activated. With the facility’s current piping system, the new controls, turndown capability will be able to accomplish this electricity savings goal. 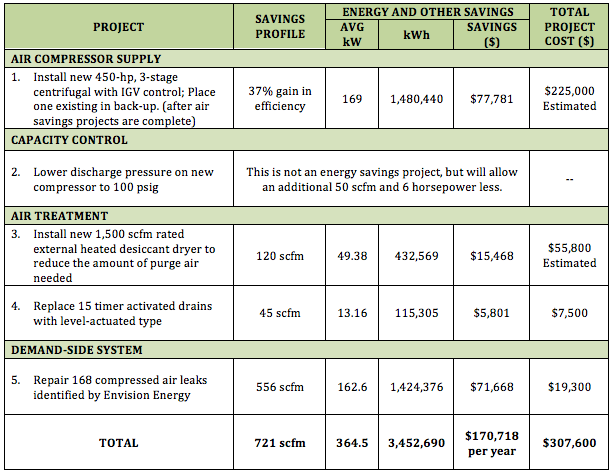 This paper plant was built approximately twenty years ago. The plant currently operates 8,760 hours per year, except for short shutdowns for maintenance. The compressors were installed at that time along with the dryers and filters. There is one main system split into two separate systems, mill air and instrument air.

The instrument air system is dried with an Airtek model TW 1500 heatless desiccant dryer while the mill air system is not dried. The Airtek dryer uses 15% of its rated flow equaling 225 scfm for regeneration of the wet tower.

The two air compressors are Joy models TA-18 450-hp class units producing around 2,000 scfm at 105 psig. Each one is a 3-stage, water-cooled centrifugal air compressor with inlet guide vanes (IGV) for unloading and blow-off piped to the outside. Currently both compressors are operated to meet plant demand with one near full load and the other operating on dual control. This control allows the unit to unload and come to idle. Currently both of the water-cooled after-coolers are tied together on the inlet and discharge side. The compressors draw 460 kW at full load producing 1,976 scfm for unit #1 and 1,991 scfm for unit #2. 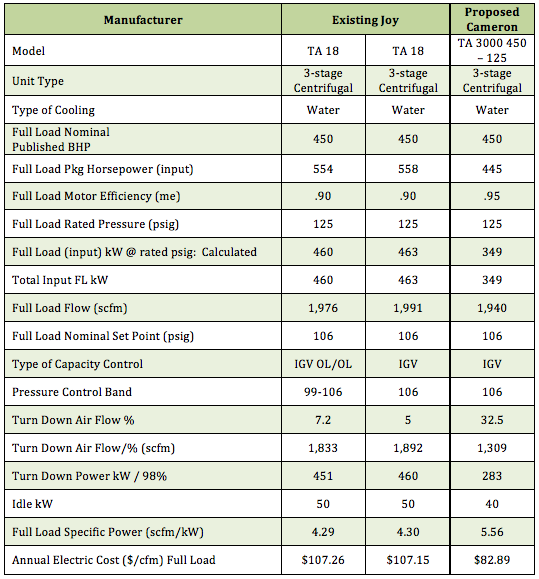 Replace the existing compressors with a more efficient unit. After the air savings and dryer projects are complete, install a new 450-hp, 3-stage centrifugal compressor with approximately 30% turndown to allow for efficient turndown without significant blow off. For example we used a Cameron model TA 3000, 3-stage compressor.

Comparison of Current and Proposed Dryers 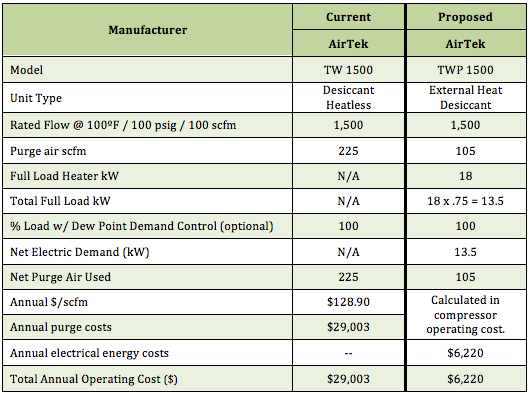 Add a more efficient compressed air dryer. Install a new 1,500 scfm rated external heat dryer for the Instrument Air system. This will allow for reducing the purge air demand from 15% to 7% rated flow saving 120 scfm. With a dewpoint demand controller installed, the cycle time between the tower switch can be extended, with the possibility of not switching for several hours past the normal four hour cycle. This time period will vary depending on the moisture intake to the compressor.

Project # 3 – Replace all timer drains with no air-loss level-activated drains.

Dual-Timer Electronic Drains use an electronic timer to control the number of times per hour they open and the duration. In theory the frequency should be adjusted to ensure that condensate drains open fully and that the open time without water is minimized because compressed air is wasted. But in reality, cycles often aren’t reset from original factory settings, resulting in condensate build-up during the summer and being set wide open during cooler weather. When they fail in “open position”, they blow at a full flow rate of about 100 cfm.

The configuration and performance of the condensate drains in the plant’s compressor area and in the distribution system do need to be modified. Fifteen condensate drains requiring replacement were identified. 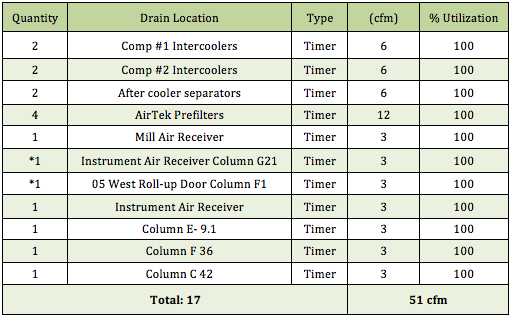 *Not included in savings calculations

Air Power recommends an ultrasonic leak locator be used to identify and quantify the compressed air leaks. We use an Ultraprobe leak detector manufactured by UE Systems.

Shutting off or valving off the air supply to leaks when the area is idle would save significant energy use from leaks. Reducing the overall system pressure would also reduce the impact of the leaks, when air to the machine cannot be shut off. Repairing the leaks can save additional energy. The savings estimates associated with a leak management program are based on the unloading controls of the compressors being able to effectively translate less air flow demand into lower cost.

With a few minor exceptions, most leaks cannot be found without the use of an ultrasonic leak detector and a trained operator. Leak locating during production time with the proper equipment is very effective and often shows leaks that are not there when idle. However, a regular program of inspecting the systems in “off hours” with “air powered up” is also a good idea. In a system such as this one, some 80 to 90% of the total leaks will be in the use of the machinery, not in the distribution system.

Some of areas surveyed in a leak study include a great deal of high background ultrasound noise that shields many of the smaller leaks. In continuing the leak management program, plant staff should perform leak detection during non-production hours in order to eliminate some of the high ultrasonic background noise.

This group of projects could reduce energy costs, at this paper mill, by an estimated \$170,718 or 56% of current use. In addition, these projects will allow the plant to have a back-up air compressor and help eliminate the rental expenditure for compressor maintenance or downtime. Estimated costs for completing the recommended projects total \$307,600. This figure represents a simple payback period of 21.6 months.