Outsourcing compressed air as the 4th Utility can be an excellent way to transform a high-cost, inefficient system into a modern system able to reduce the total cost of ownership. Treating compressed air as a true utility and outsourcing the entire process is a growing trend in the industry. If a plant does not generate their own power, provide their own water or deliver their own natural gas, then why not treat compressed air requirements in the same manner? This article will use a recent project as a case study to show the benefits one factory received by making the decision to outsource compressed air like a utility.

This factory is in the plastics raw materials industry and operates 24/7 all year. The major processes, using compressed air, are air-operated control valves for mixers and material movement processes and secondly (but more importantly) the dense phase transport systems. 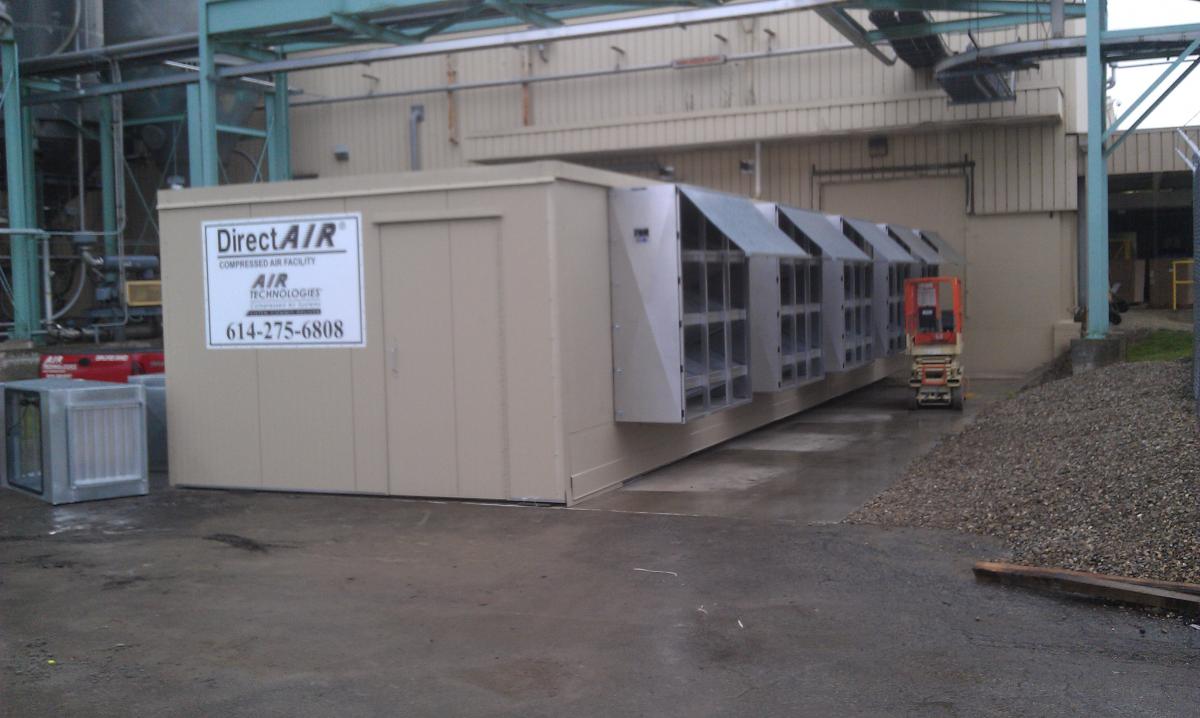 This was the situation when the factory asked DirectAIR® to conduct a system assessment and make a proposal on outsourcing compressed air as a 4th Utility. The system assessment was conducted twice, with each assessment logging measurement data on site over a one-week period. The two assessments provided virtually the same results. 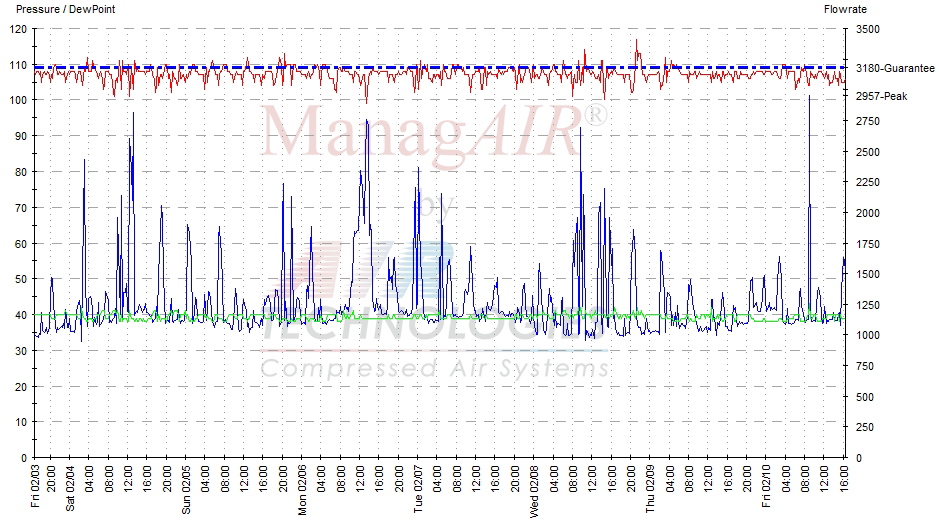 The demand profile established a base load of almost 1,250 cfm with demand events all day reaching up to 2,957 cfm.

Peak compressed air consumption was 2,957 cfm. One-third of the compressed air demand went to the production area, consistently consuming 1,250 cfm at an average pressure of 105 psig. The unique challenge in this system is presented by the dense phase transport application using significant volumes of compressed air during periods lasting up to 45 minutes. These demand events occurred on average eight times per day. The air compressors were struggling to maintain system pressure, during these demand events, and were not operating in the most efficient manner possible.

The site had six rotary screw air compressor located in five places throughout the plant of varying sizes. Some had load/unload controls and others were modulating and trying to maintain system pressure at 105 psig. There were two receiver tanks, each with 1000 gallon storage capacity. The plant had only one compressed air dryer – a decentralized desiccant air dryer used for the “control air” of 1,250 cfm for the production area. All of the air for the dense phase transport system was “wet” – with no compressed air treatment being used at all.

The air compressors ran inefficiently and were load/unload and/or modulating. When the demand spikes came, they would all ramp up to try and keep up. Compressor Units #1 through #4 were working the most. The #4 air compressor, a 300 horsepower model, was unloaded for too many hours and consuming approximately 30% of its’ power when unloaded. 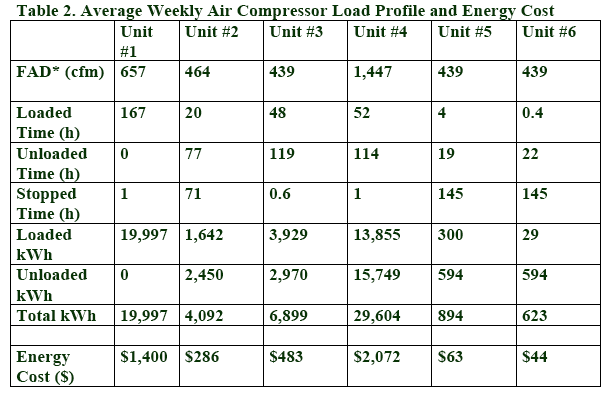 The new system was designed to meet the demand profile. As already illustrated, the demand profile featured a stable level of 1250 cfm running 24/7. The demand events (spikes) occur roughly eight times per day and demand jumps to 2,950 cfm. These demand spikes were not going to go away.

The DirectAIR system is located right outside the plant wall. We plumbed into their header. Power was brought to it from a transformer located right next to the modules. The DirectAIR system consist of seven modules. Each module has an air compressor and a refrigerated air dryer. There is a header connecting all the units within the module. The compressors are all managed by the ManageAir automation system. The module has exhaust ports and also openings for heat recovery systems.

The objective of the new system design was to have three air compressors optimize the efficiency of providing compressed air to the baseload of 1,250 cfm and then have another three air compressors available to do the same for the demand spikes - and then shut to them down and minimize unloaded energy consumption.

The stable “base load demand” of 1,250 cfm for the production area is efficiently supplied by compressor units #2 and #3. They are running continuously with the variable speed drive unit #1 trimming the base load of 1250 cfm. Each air compressor has a dedicated refrigerated air dryer and the air will also go through the decentralized desiccant air dryer (in the plant) during the winter months.

Air compressors #4, #5, and #6 are set up to handle the demand spikes and the last one is off and is the back-up. Each one has its’ own dedicated refrigerated compressed air dryer. The biggest difference is that the three air compressors for the spikes are completely off when not needed (as opposed to being in the unload mode). 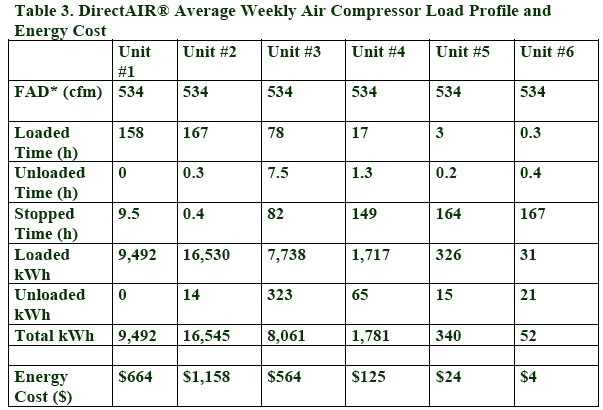 DirectAIR® owns the system and is 100% responsible for all maintenance and service costs. The ManageAir® compressor automation system runs autonomously and alerts DirectAIR® service technicians if there are any issues and when service needs to be scheduled. The module has a back-up air compressor (Unit #7) in case any of the units should go down.

Since installation, the plant has reported two unplanned positives from the system. The first is that they have typically spent \$80,000 per year on the carbon filters used to treat the wastewater of the plant. Now that the air compressors are not contributing oily condensate to the plants’ wastewater system, their spend has dropped to \$40,000 per year.

The second unplanned benefit has been \$10,000 reduction on the HVAC natural gas bill due to the heat recovery package installed on the air compressors.

Treating compressed air as the 4th utility in the plant is yielding financial benefits for this plastics processor. The plant pays a fixed fee for the service plus a compressed air use fee based upon actual flow consumed. The savings outlined above have more than paid for all the fees and no capital is being deployed on new air compressors.