Vale in Thompson, Manitoba, Canada has reconfigured a system of large turbo compressors in their mining, milling, smelting and refining operation and gained very large energy savings through a series of improvement projects. In addition, these projects qualified for some significant financial incentives from their local power utility. Vale is a large multinational mining company with headquarters in Brazil. Vale operations focus on the production of iron ore, coal, fertilizers, copper and nickel. The Thompson Manitoba operations consist of mining, smelting, milling, and refining of Nickel in the 250 acre complex that employs 1,500 people.

The compressed air for the site is produced in a central powerhouse with utilities piped to the various separate buildings within the complex. When new, the 100-psi compressed air system at the site consisted of five large axial compressors, ranging in size between 5760 hp and 2500 hp. In the past, the total compressed air production reached levels of 48,000 cfm, consuming 9.3 MW of power.

Throughout the life of the site, the operating conditions have changed significantly. As the mines became fully developed, compressed air flow required for production operations peaked, leveled off, and then started to fall. Leakage, however, grew over time due to aging pipes and failing equipment. In the mid ‘90s, Vale, which was called INCO at the time, suspected that their compressed air system was not running at optimum efficiency levels and called in some expert compressed air auditors. At that time, a new mine was starting up and the powerhouse superintendent was faced with some new load that would exceed the capacity of his existing system. The purchase price of the required new production equipment would cost millions. 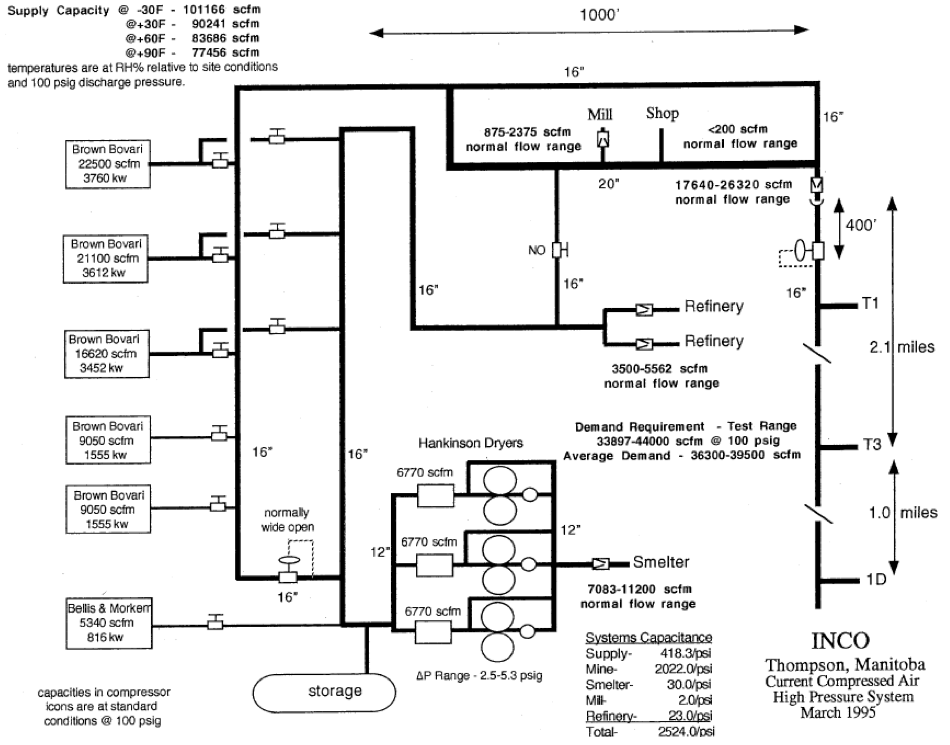 The powerhouse management was very surprised by the audit results. Of the average flows, more than half was being wasted due to leakage and inappropriate use. Among other things, the auditor recommended formulating a strategy to find and repair leaks in various areas, and installing monitoring instruments to track the compressed air flow to the various usage areas. The powerhouse superintendent went one step further; he started charging the users for compressed air — something that immediately raised the awareness of the high cost of compressed air among the other superintendents. In order to reduce their costs, leakage repair efforts were started with immediate results. Within a few months, the average compressed air flow dropped in half, reducing the total system cost significantly, but also releasing compressed air production capacity. This effort allowed Vale to defer the very expensive purchase of compressors for the new mine.

Eliminating Blow Off with Better Controls and New Trim Compressors 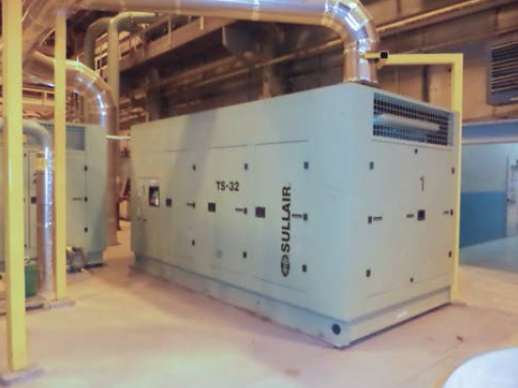 Two are Better than One: Replacing Vale’s Largest Turbo Compressor

The system ran in a very efficient manner for a period of time until the largest turbo compressor, Unit 5, suffered a catastrophic failure. The compressed air demand at the time was such that the largest of the turbo compressors and the trim capacity was just enough to satisfy the compressed air demand. Running any of the smaller turbos did not provide enough capacity, requiring a second large turbo compressor to be put online. This operation was a step back from the previous mode of operation and decreased the system efficiency. Repair of Unit 5 was estimated at higher than the price of new compressors. A cost benefit analysis showed that purchasing new compressors was the most cost-effective solution to the problem.

Rather than purchasing one new large compressor as a replacement, the Vale powerhouse superintendent decided on two smaller units that totaled the equivalent output of slightly less than Unit 5. These units were purchased with controls capable of coordinating the operation between units so they would share the load and keep the operation away from the wasteful blow off region. Inlet guide vanes were selected as an option, which extended the turn down range of the units, making overall system efficiency better. The units were purchased with airless drains for each stage to eliminate compressed air waste. The inlet of these compressors draws cool compressed air from outside, increasing the throughput of the compressors during cold weather operation. The units have been outfitted with individual flow meters so the performance of the units can be monitored to ensure conditions remain optimum. 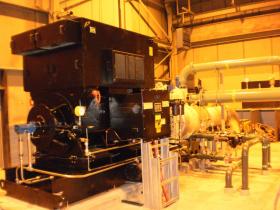 Replacing the old Turbo 5 with two new compressors has saved a significant repair bill, and has made the system more efficient.

Once the new units were started up, the compressed air system efficiency returned to normal. In fact, some additional savings were gained since the two new compressors are more efficient than the old unit. An additional 100 kW of power savings has been verified, qualifying for a \$200,000 compressed air incentive from the power utility.

The Vale site was one of the first installations of hybrid-style air dryers in the early ‘90s. Hybrid-style dryers are a combination of refrigerated and externally heated blower style desiccant dryers. The type purchased by Vale runs on an 8-hour cycle and is controlled by dew point sensors.

The general compressed air produced by the powerhouse is not dried, but the piping in the smelter is exposed to freezing temperatures in winter, requiring desiccant dried air. This level of compressed air quality is not required in warmer weather. Use of the hybrid dryers allows the less expensive refrigerated quality air to be used in spring, summer and fall seasons where freezing temperatures are not encountered. In winter, the desiccant dryers are activated, adding power costs for the heaters and blowers used to regenerate the desiccant, but eliminating freeze-up problems in the smelter. The dew point controls delay heater and blower operation until necessary, reducing the overall operating cost substantially during partial loads compared to a fixed-cycle heatless desiccant style arrangement. 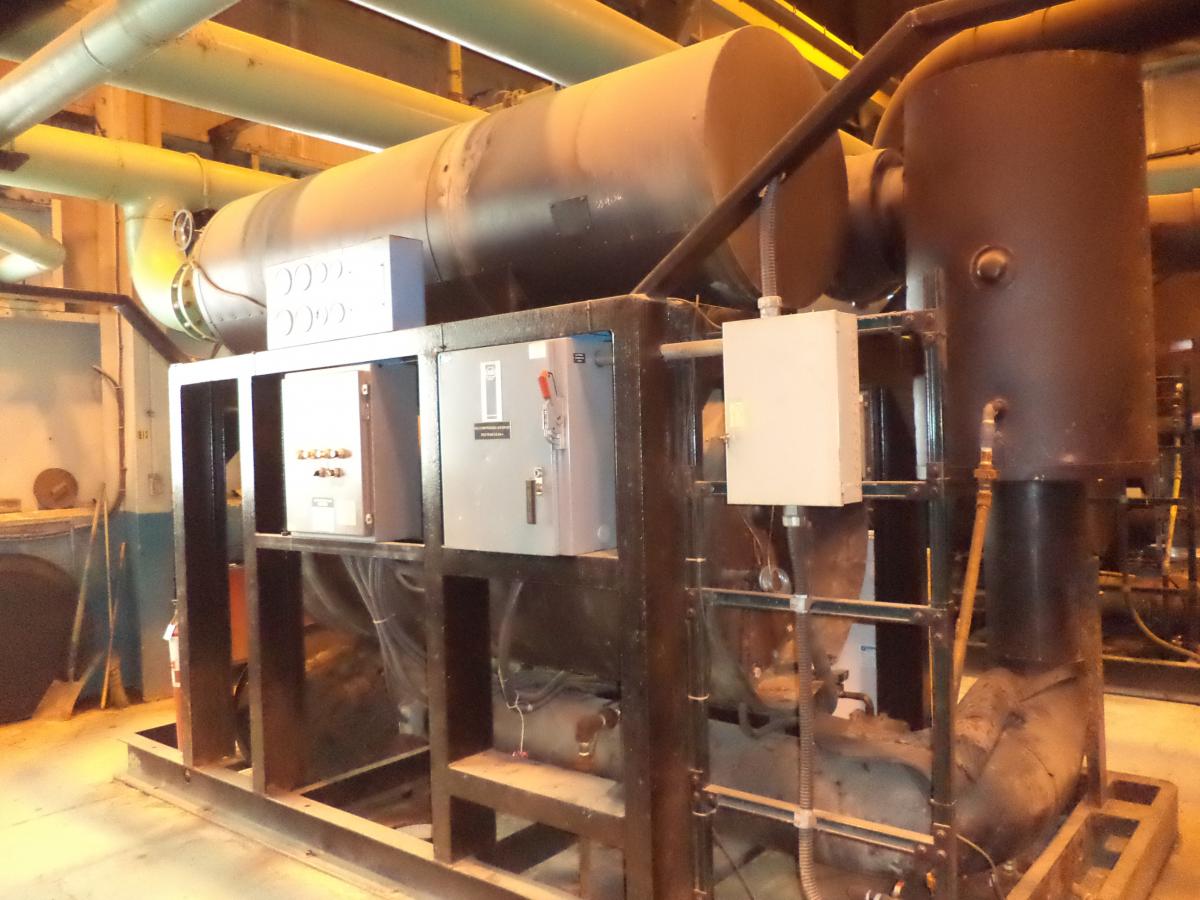 Hybrid-style dryers are used onsite to condition the air for the smelter. This is the 10,000 cfm rated refrigerated part of the combined refrigerated/heated/blower desiccant unit.

The Benefits of a Competent Compressed Air Auditor

Vale has proven that substantial savings and deferred capital costs can be gained by having a competent auditor take a close look at the complete system. The awareness of the compressed air waste and how the compressed air is being produced can spur action that can gain some excellent financial benefits. Good compressor control can minimize operating costs, especially when combined with compressed air demand reductions.