By addressing inappropriate uses of compressed air and making changes to the compressed air production side of their compressed air system, a distiller of fine alcohol products reduced its energy consumption by 30%, saving \$16,600 per year in energy costs - with more potential savings possible. 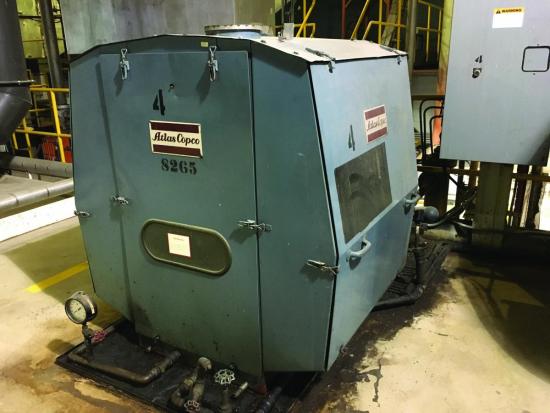 Figure 1: An air compressor has performed reliably for decades, but the aging unit needed to be replaced with a more modern, higher efficiency air compressor.

The facility has a fermenting, distilling, storage and distribution operations onsite, all of which use various amounts of 100 psi compressed air. The compressed air contacts various products at different stages of processing in the facility, so there is the need to produce the cleanest possible compressed air to maintain quality and product safety.

The compressed air system consisted of three water-cooled, oil-free air compressors of various ages, running in load unload mode. Air compressor sizes were 110 kW, 90 kW, and 160 kW.  The operation typically used the 110 kW unit for base load with the 90 kW air compressor starting for peak duty. The 160 kW unit, being very old, was used for back-up.

Drying is done using a heated blower style unit with dewpoint dependent switching to provide compressed air with - 40 oF pressure dewpoint. A refrigerated air dryer had been installed at one point for back-up duty, but was shut down due to maintenance issues.

The compressed air is directed throughout the plant through a system of steel piping. One medium sized 500-gallon storage receiver is located in the compressor room area as dry control storage, with various large receivers located out in the plant for peaking duty.

The compressed air is delivered to the multiple production areas through piping headers from which various branches are tapped to supply to each production operation.  Installed data loggers showed minimal pressure loss across the piping system. Most of the pressure loss is across the drying and filtering system or across restrictor plates deliberately designed into the system.

The compressed air system electrical consumption was monitored as part of an extensive audit using amp loggers. Kilowatt readings using a hand held meter were taken for both the active air compressors to calibrate amps to power. System flow was recorded using the plant flow meter. Figure 2 shows the baseline during a two-week period. 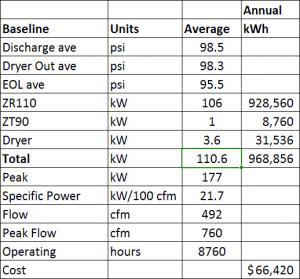 Figure 2: The distillery pays \$66,420 per year for electricity to power the compressed air system. 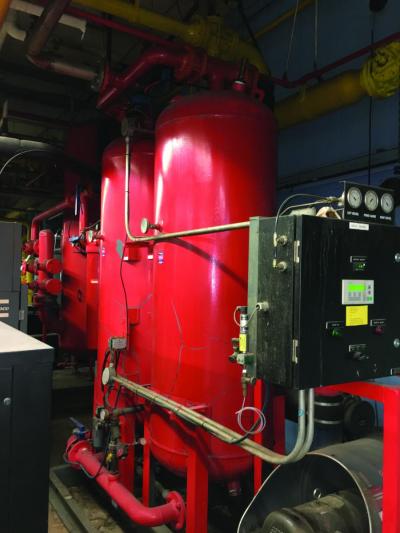 The readings and observations during the measurement period showed the compressed air system was producing air at fair efficiency (21.7 kW/100 cfm). The assessment found problems with the air dryer cooling purge flow, higher than needed discharge pressure, some small leakage and drainage, and some possible inappropriate uses, were causing higher than desired operating costs and occasional pressure issues. The study found that significant improvements were possible. 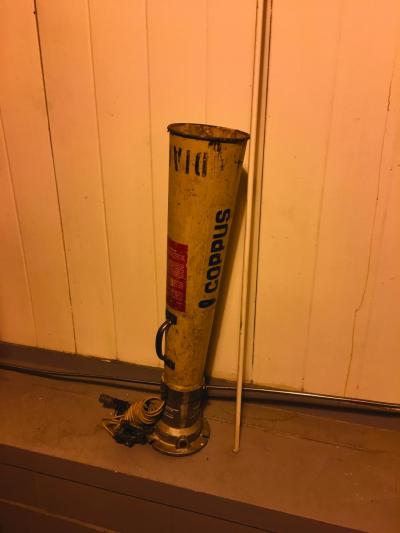 A survey of the demand side of the system was done including leakage. A total of 49 leakage points were found, estimated at 87 cfm. Various compressed air uses, which could be classed as inappropriate, were found including star seal blowing, bin vibrators, poorly adjusted dust collectors, compressed air vacuum, air horn blowers and fume blowing.

Shown in the red line of Figure 4 is the shape of the compressed airflow demand curve during production over a one-week period at the end of the data logging. The pressure profile shows good pressure regulation when only one air compressor is required. Dips in pressure can be seen on occasion when two air compressors are required. The profile shows a somewhat flat pattern during production activities, with higher peak flows just after the air dryer heating cycle.  This is caused by the dryer cooling cycle where a flow of compressed air is directed into the desiccant to remove the remaining heat. If this is not done, a dewpoint spike will develop when the dryer stitches sides.

Additional peak flows are somewhat random, associated with clearing of alcohol lines after transfer of product. Compressed air is injected into stainless steel transfer lines to remove the remaining product before another ingredient is pumped.

Careful analysis of this profile showed that the air dryer was consuming higher than normal cooling purge, something that can easily be adjusted. It was thought that reduction of this would reduce the requirement for two air compressors, saving on peak demand. Savings could also be gained if leakage and inappropriate use could be reduced. 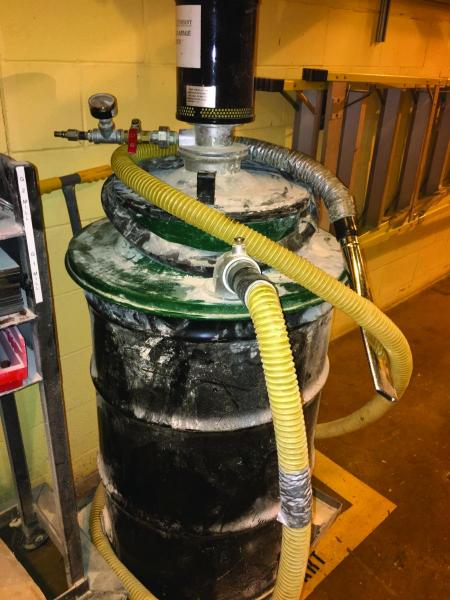 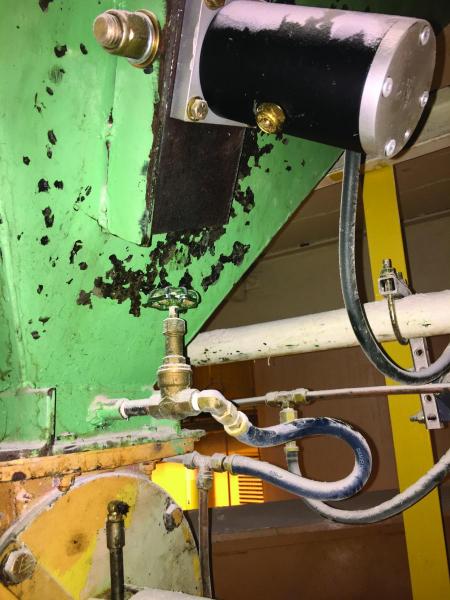 Shown are bin vibrators used in the distillery’s process. 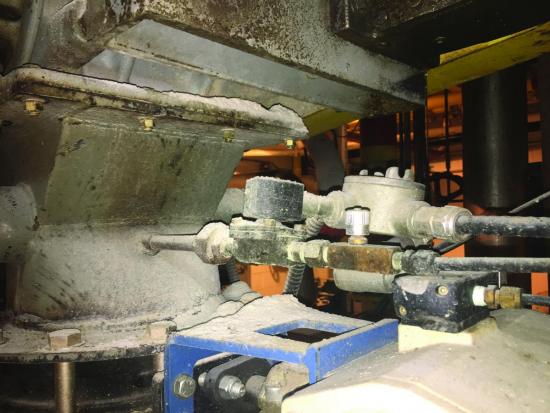 Star seals are used on the cooker as shown to meter the amount of ingredients going to the vessel. 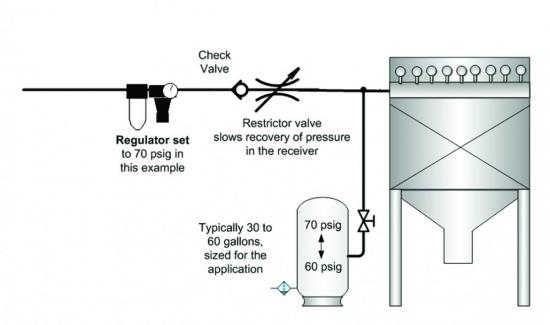 The existing air compressors were running in load/unload mode with coordinated cascaded pressure bands. With this type of operation there are periods of time where the air compressor is unloaded running, consuming power, but producing no compressed air.

This area of inefficiency is identified in the red as shown in Figure 7, which is a profile of C3 air compressor amp logs sorted highest to lowest to form a histogram, also called a load duration chart. This area could be addressed by choosing an air compressor with a control mode that doesn’t have unloaded run time (like VSD operation).

And, in addition, there is extra power consumed by the air compressor if it runs at pressure higher than required by the plant as indicated with the yellow portion of Figure 7. This can be addressed by reducing the air compressor discharge pressure by adjustment of the pressure bands. Use of a VSD air compressor would allow a constant, lower plant pressure, rather than operating with a saw toothed waveform using load/unload control. 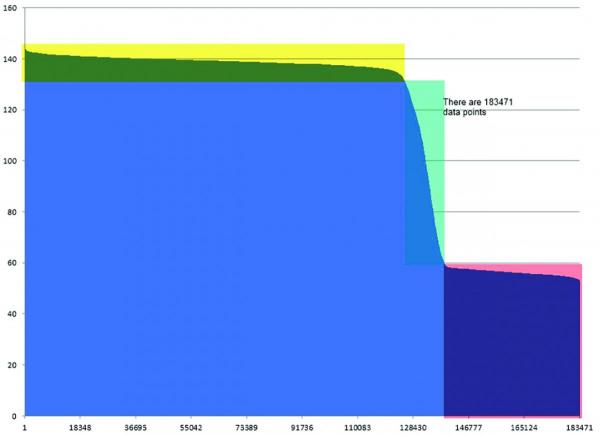 At the distiller, the following action items were taken:

Savings for these measures, based on air compressor histogram readings, are 257,000 kWh resulting in reduced electrical costs of \$16,600 for a 30% energy savings. The initial studies were made possible with the financial and resource support of the local power utility. The final project was also partially funding with incentives from the power utility. Further potential savings should be expected if this compressed air user follows up on additional leakage repair and addresses additional inappropriate uses of compressed air.