One of the statements made in the Compressed Air Challenge’s Fundamentals of Compressed Air Systems seminar is that improvements can always be made to every compressed air system, including new ones. The statement definitely applies to a Canadian pork processing facility built a few years ago. This article is based on a compressed air audit performed two years into the life of a brand new plant. The audit found numerous problems and made recommendations that helped reduce plant compressed air operating costs by 60 percent.

The compressed air production and treatment system consisted of three large, 300-hp, 1250 cfm, fixed-speed, and air-cooled lubricated screw air compressors running in load/unload mode. System storage was 4000 gallons. Two types of compressed air dryers were used; Non-cycling refrigerated was used for air sent to the kill floor areas of the plant where ambient temperatures were normal. For meat processing areas where the ambient temperatures were in the 40°F range, the compressed air was dried using a heatless desiccant air dryer. The refrigerated and desiccant dryers were installed in series.

The air compressor cooling pulled in outdoor air, sometimes reaching temperatures of -40°F, which was tempered by mixing with hot compressor discharge air through a crossover duct. While this is a good use of the compressors’ heat of compression, it is one of the few good things known about the system.

The local power utility offered to conduct a plant compressed air audit to determine the system efficiency. The system was monitored with data loggers to find out the system efficiency and assess if there were any obvious problems. The audit found the energy input into the compressed air system averaged 440 kW to produce an average flow of 1250 cfm, resulting in a system specific power of 35 kW per 100 cfm. This number was significantly higher than expected considering the air compressors are rated at 20 kW per 100. The audit also found about 47 percent of the compressed air demand was classed as “potentially inappropriate use,” and more investigation was required. 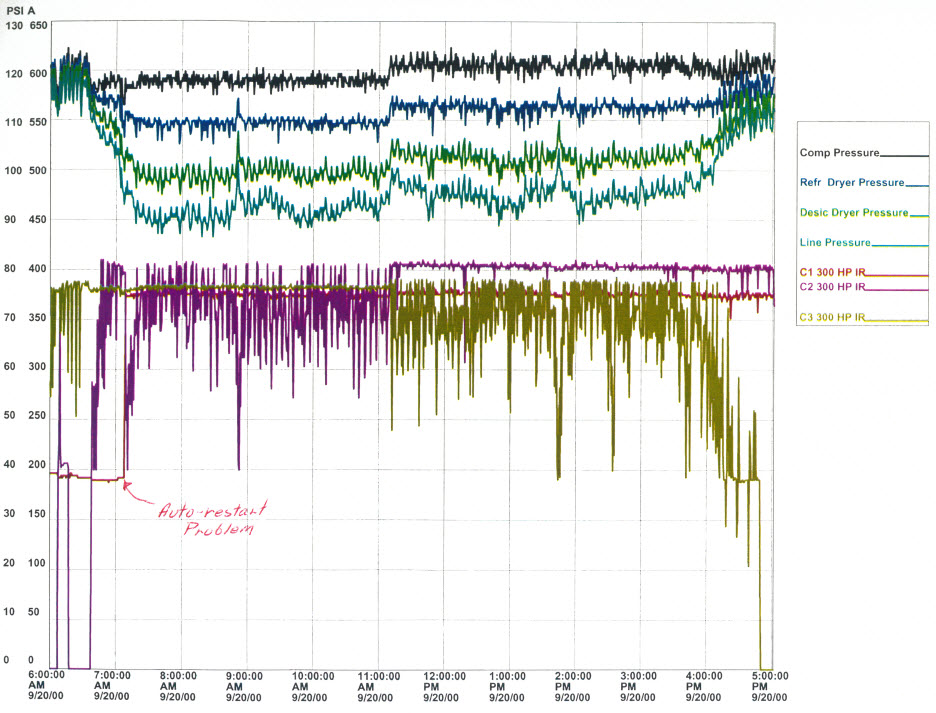 The meat processing plant had significant problems with compressed air pressure (Figure 1) due to poor air compressor control methods and significant pressure loss across air dryers, filters and piping. At times the air loading was exceeding the capacity of the compressors, causing system pressure to draw down to lower levels. Air quality was poor due to problems with the dryer configuration and design. Filtration problems were allowing oil to foul the dryer desiccant, reducing the drying effectiveness. Required dew points were not being achieved due to these issues.

Significant pressure differential was experienced during peak loads, especially across the dryers.

Occasional peak plant loads were far in excess of the total capacity of the air compressors. Some items in the plant had changed from the original design, and this had led to a huge increase in the expected load. For this reason, a very detailed inventory of the various end uses was compiled (Figure 2).

A thorough investigation of the plant end uses was conducted to determine if compressed air loads could be reduced. Almost 60 percent of the flow was consumed by the plant transport systems and blowing.

The plant has a kill operation, and between the point of live hog input and cut meat output quite a lot of material is removed from the carcasses. The plant designers adopted an extensive dense phase pneumatic transport system to send materials like hair, offal, lungs, stomachs and ears to the locations in the plant where they could be prepared for transport to rendering or processing facilities. Although unpalatable to read about, all these byproducts serve a useful purpose in our food chain, and they are not wasted. 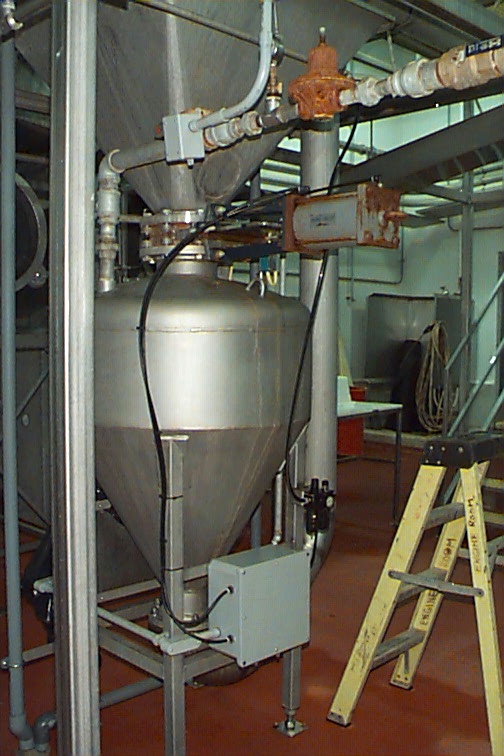 One system of blowing was particularly expensive. The setup used 24 flat nozzles to remove residual water from a conveyor after it had been washed and sterilized (Figure 5). Use of these nozzles is very energy intensive — especially if the nozzles have broken off, allowing air to blow from an open hole. Investigation found that 50 of these nozzles had been installed in various locations, totaling 820 cfm of peak flow — the equivalent output of a 200-hp air compressor. 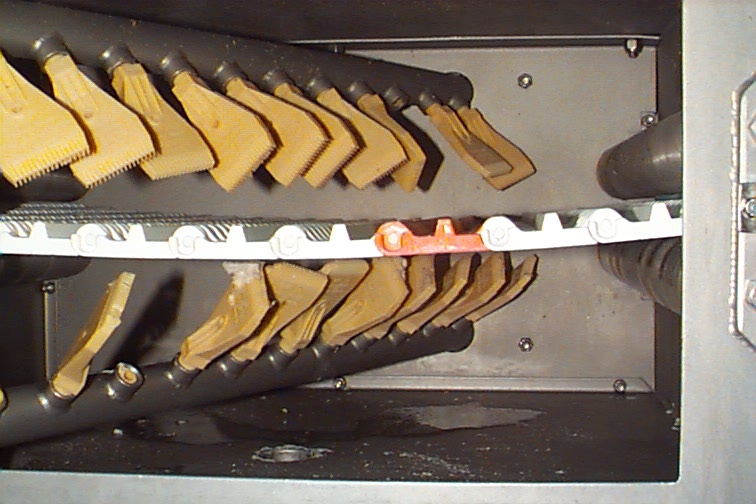 During the plant audit, the author came across what, in his opinion, was the world’s worst job. Part of the hog slaughtering process involves an operation called hog bunging. This operation can be meekly described as removing a prime portion of the rear end of the hog so the remaining carcass is not contaminated. This job involves inserting a special tool into the area of the hog “where the sun don’t shine,” and pulling the trigger to do a precision ring cut. This is done day after day, on 1500 hogs per hour — an important, but boring and dirty job. 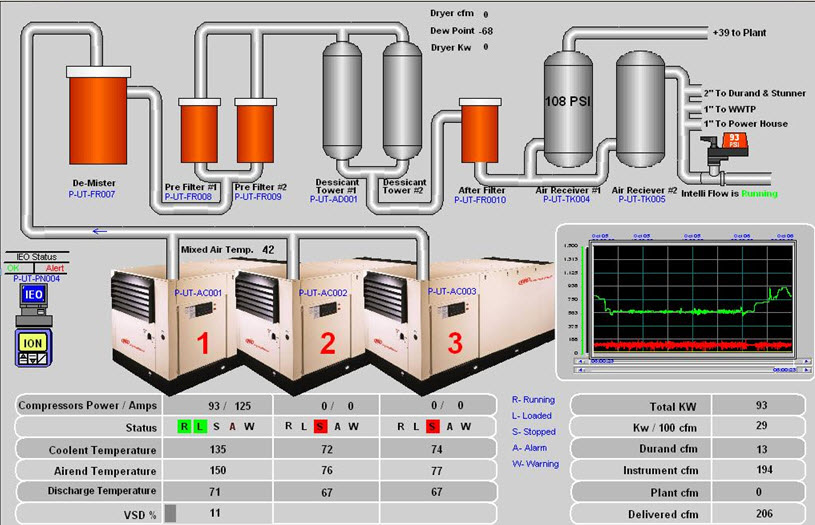 Figure 6: The system is now monitored from a central location.

The meat processor was able to make some extensive modifications to the compressed air system to improve the plant pressure, improve air quality, and reduce energy. The measures included:

In all, the improvements significantly reduced the pressure differential and reduced the system energy consumption. The verified savings for the improvements showed that the plant saved 2.9 MWh per year, for a 60 percent reduction in energy costs. The company was also able to receive a financial incentive of \$217,000 to help with the project costs.