Air-operated double diaphragm (AODD) pumps are common to many manufacturing facilities. As estimated by veteran compressed air auditor Hank van Ormer of Air Power USA, approximately 85 to 90 percent of plants in the United States have AODD pumps. They are used for all kinds of liquid transfer applications, like those found in chemical manufacturing, wastewater removal, and pumping viscous food products. 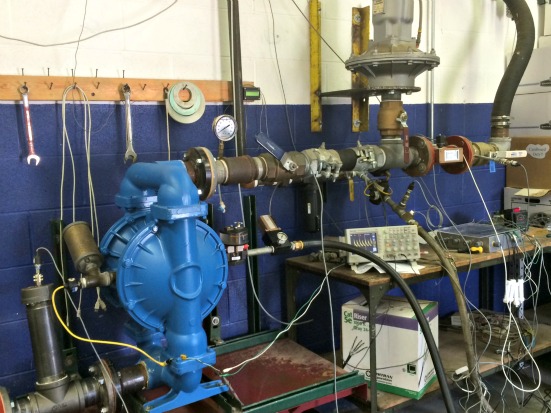 As ubiquitous as they are, AODD pumps are also commonly misused. Per van Ormer, “No air-operated equipment should run uncontrolled.”However, a good number of manufacturing facilities still run AODD pumps without controllers.

“The typical situation we see [with AODD pumps] is there is no controller attached,” explained Dr. David Goodman, Ph.D., C.E.A., Assistant Director of the Indiana Industrial Assessment Center (IAC) and professor at IUPUI. “The pump has internal controls that cause the diaphragms to slam back and forth continuously. [Factory personnel] then turn the air off when they don’t need the pump.”

Goodman and his colleagues at the IAC help small and mid-sized manufacturing companies become more competitive by saving on energy costs. They work with several second- and third-tier automotive facilities whose AODD pump applications include chemical cleaning and paint removal.

AODD pumps have several advantages: they can handle aggressive chemical or physical product throughputs; they can run empty without catastrophic failure; and they can be repaired quickly. However, uncontrolled AODD pumps can be absolute energy hogs, so Goodman and his team evaluated the viability of electronic controls for saving energy. In their study, they ran comprehensive pump tests using MizAir®, an electronic controller manufactured by Proportion-Air, Inc.

Presented by Goodman at the World Energy Engineering Conference (WEEC) 2015, the study tested four different AODD pumps — running them with and without an electronic controller. The results were promising, and showed a potential reduction in compressed air consumption of 20 to 50 percent when the MizAir was applied to an unregulated AODD pump.

To learn more about the project, Compressed Air Best Practices® Magazine spoke with Dr. Goodman of the Indiana IAC, along with Jon Lister, Electrical Engineer, and Larry Brown, Sales Manager, from Proportion-Air, Inc. We also spoke with Hank van Ormer, President of Air Power USA, to get insight on the real-life application of MizAir electronic controllers on AODD pumps.

Air-operated double diaphragm pumps use compressed air pressure to generate diaphragm force and move a liquid medium. The two diaphragms operate in paralleled oscillation — as one diaphragm is pushed by compressed air away from the center section, it forces liquid out of the pump. At the same time, the other diaphragm moves toward the center, creating a low-pressure zone and pulling liquid into the vacated chamber with atmospheric pressure. Once the pressurized diaphragm is fully extended, it activates a poppet valve. The poppet valve then triggers the inlet air valve to direct incoming compressed air to the suction-side of the diaphragm pump, reversing the whole process. Compressed air is wasted during the transition between diaphragms. 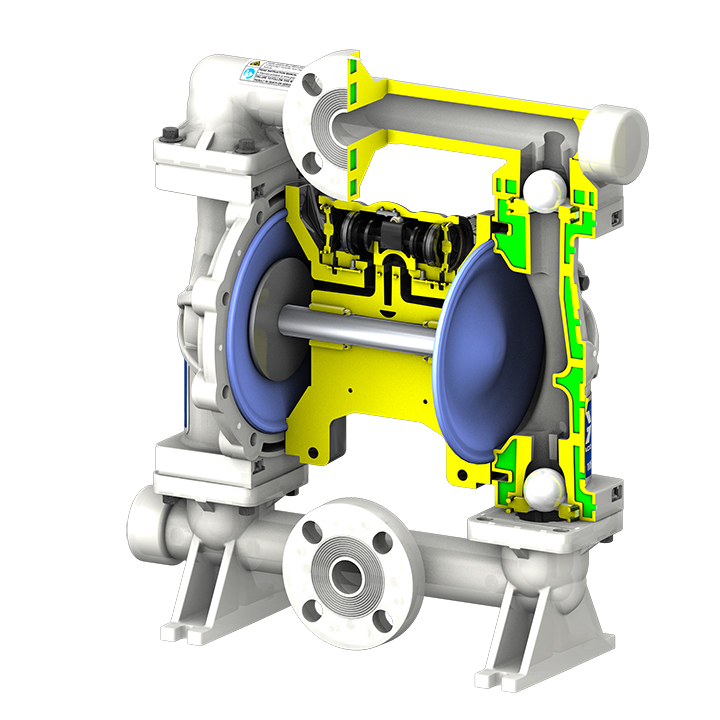 Figure 1: On a typical AODD pump, compressed air pushes the diaphragm (blue), which then forces the liquid up and out of the chamber (bypassing a ball valve). Image courtesy of Graco.

“Whenever the compressed air fills all the way in one of the diaphragms, the valve switches the air so it goes into the opposite diaphragm,” Jon Lister, Electrical Engineer at Proportion-Air, explained. “But, while it is switching, it is constantly blowing out compressed air. In some cases, a certain amount of compressed air goes straight through the pump and out the exhaust. That’s obviously pretty bad for shop air and for the people paying the power bills.”

Each full extension of a diaphragm is called a press stroke. The speed of the strokes impacts how much compressed air flow (in cfm) the AODD pump consumes. They typically run at 85 to 95 psi, depending on the application. The more viscous a material is, the higher the pressure needed to push the diaphragm and move the medium. The higher the pressure, the slower the stroke frequency.

How the MizAir® Electronic Controller Works

MizAir® (U.S. Patent #7,517,199) is designed to decrease compressed air consumption in AODD pumps. It analyzes pumping performance with a microprocessor, and uses that information to modulate a high-flow, normally open, two-way air valve. Positioned on the inlet air valve of the AODD pump, the MizAir unit delivers precisely timed and gauged pulses of compressed air at the beginning of each pump stroke, and it closes immediately afterwards. The compressed air in the pump can then continue expanding to fully extend the diaphragm. 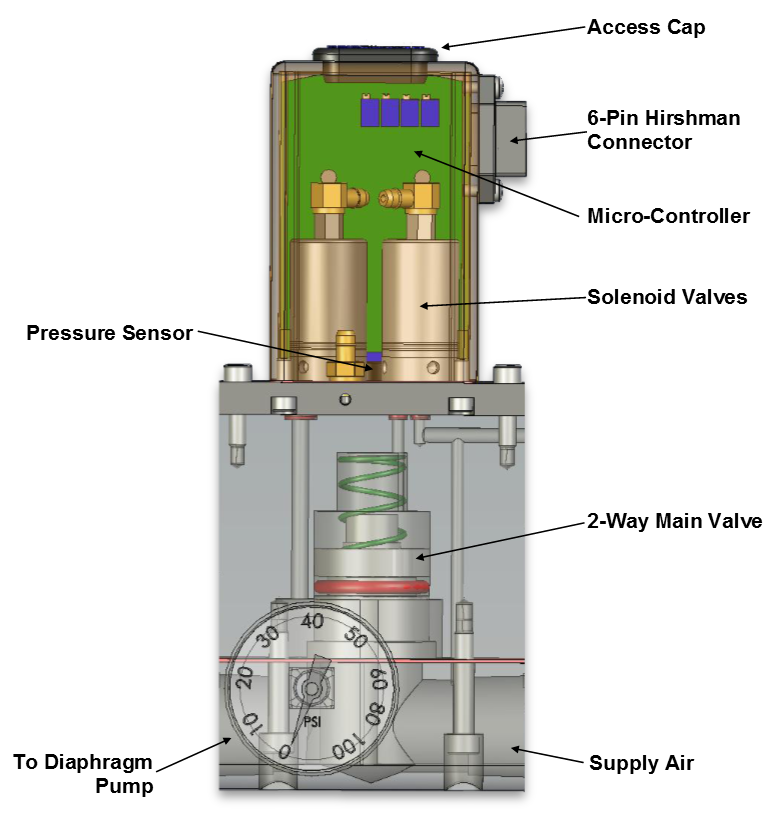 “MizAir monitors the strokes, and it simply turns the compressed air on and off,” Lister said. “It’s synced up with the pump, so it gives it a big burst of air at the beginning of the [diaphragm] switch to get the momentum going. Then it cuts it off. Because you have 80 or 100 psi of compressed air in this diaphragm cavity, your typically throwing more air in there than you need. So we just shut it off, and let what’s in there do the work.”

There are several benefits to the approach. First, the pump ends its stroke with less compressed air, eliminating compressed air wasted in the exhaust. With less exhaust, there is also a definitive reduction in noise levels. The pump can then start its next cycle easier, as there is less resistance against the return stroke.

“During the switching, we aren’t blowing compressed air directly out of the exhaust,” Lister told us. “That’s where we save our compressed air — by modulating the air coming in. Sometimes, depending on the situation, the pressure will bump up a little bit at the pump because you’re no longer constantly bleeding, and that helps out too.”

The MizAir is programmed to a specific model of AODD pump. Therefore, it can adapt to outside influences, because it understands how the pump operates. Its microprocessor monitors how quickly the pump strokes, and what pressure is required for each stroke. It can then adapt to process changes.

“If you were unloading a rail car of fluid, pumping it to holding tanks on the first floor of your factory, and you have to shift the valve and send it up 20 feet to the second floor, it requires more energy to move the fluid,” Larry Brown, Sales Manager, Proportion-Air, said. “You have 20 feet more head pressure. MizAir sees that and holds the valve open a little longer, allowing a bigger slug of air to go into that diaphragm cavity so that you still have similar throughput.”

Fluids with differing viscosities could also affect head pressure. The MizAir controller adjusts to that type of process change as well.

“The neat part about the MizAir is it’s a microprocessor, so if the viscosity changes it automatically resets itself,” Hank van Ormer explained. “The biggest opportunity in savings is lighter weights — in other words, with water and similar liquids, because your stroke speeds are higher. Therefore, your air usage (cfm) is higher. If you have a pump with a pretty high head and low strokes per minute, then there’s not going to have a very high demand.”

Improving the energy efficiency of AODD pumping systems is directly in line with the goals of the Indiana IAC. Funded by the U.S. Department of Energy, the Indiana IAC is required to substantiate energy savings claims. When Dr. Goodman’s team came across the MizAir controller, it provided an ideal project — comparative validation testing on an AODD pump controller.

“We are always looking for new technology that can reduce energy consumption in facilities,” Dr. Goodman explained. “The DOE requires us to do cost justification and calculations to back up all of our energy savings claims. So, we decided to test the MizAir on four different pump systems. We did it at two separate pressures, and three different flow rates — so we had 48 trial runs.”

Using ANSI/HI 10.6-2010, the standard applicable to AODD and bellows pumps, the Indiana IAC team designed test rigs to evaluate four different models of 2-inch and 3-inch AODD pumps. The test rigs were evaluated for ANSI compliance, and they were fully validated before initiating the trials. The study was fully complemented with a suite of diagnostic equipment, including: 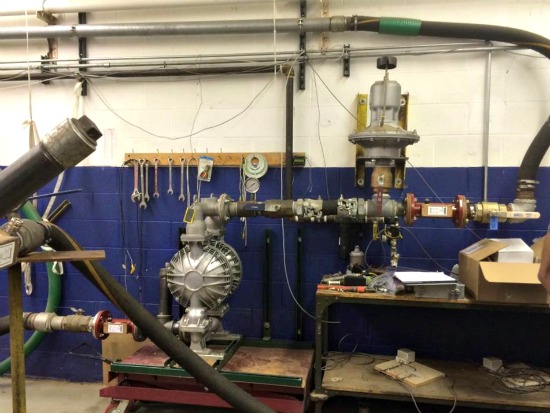 The Indiana IAC team evaluated the test rigs for ANSI compliance, fully validating them before the trials.

The tested equipment had the following specifications:

The test results demonstrated that controlling an AODD pump with a MizAir controller could reduce compressed air consumption by roughly 20 to 50 percent, depending on the size of the pump and the flow rate of the liquid pumping medium. Figures 4 and 5 illustrate the findings. The data on Figures 4 and 5 were taken from Pump 2 as it was tested at nominal fluid flow rates. Under MizAir control, the AODD pumps used significantly less compressed air when moving the liquid water medium. These results were mirrored in each of the other testing configurations. 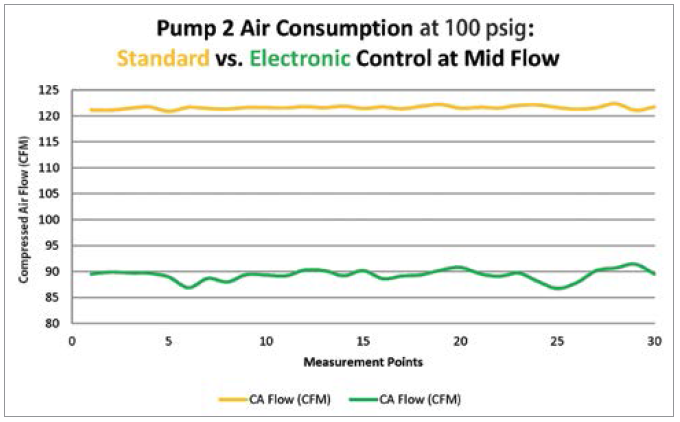 Figure 4: At nominal liquid flow, 100-psig compressed air consumption (cfm) was reduced dramatically with the use of electronic control. 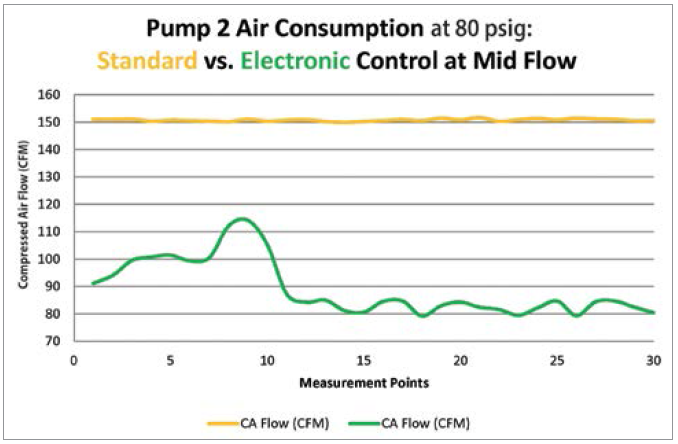 Figure 5: At nominal liquid flow, 80-psig compressed air consumption (cfm) was reduced dramatically with the use of electronic control.

The researchers also tested to see if the controller had an impact on liquid flow rates. Though the tests demonstrated that the fluid flow rates were reduced by an average of 2 percent when the MizAir controlled the AODD pump, the drop was considered negligible in contrast to the compressed air savings.

“The magnitude of that drop in [liquid] flow rate is small — it’s really trivial,” Dr. Goodman said. “You can make it up by either running the pump for 2 seconds longer, or you could make it up by increasing the pressure. Most of these pumps operate at 80 psi. We tested at 80 and 100 (psi). So, as you increase the pressure of the compressed air unit, you can improve the flow rates.”

Determining the ROI of Electronic Controls for AODD Pumps

As with most compressed air energy efficiency projects, moving forward comes down justifying the economics. In the field, Air Power USA has reduced the compressed air consumption of AODD pumps by as much as 40 percent with the MizAir controller. “The real problem is how you measure,” van Ormer told us. “Most people don’t have a lab.”

“If you are interested in energy savings, then you have to know what the costs are of what you’re running,” van Ormer explained. “To be accurate on the savings, you need a needle gauge and a hose right there where compressed air feeds the pump, so you can see exactly what the pressure is. And then you have to count the cycles carefully.”

The MizAir® has other benefits as well, including a decrease in noise and an extension of the life of the AODD pump. The results of the Indiana IAC study, along with real-world application of the MizAir in the field, all show the potential energy savings of retrofitting the controls of AODD pumps.