What is In-Process Air Gauging?


In recent years, we have seen an upward trend of higher production manufacturers wanting to integrate their air gauging quality checks from a stand-alone, outside-of-machine device where the operator is performing a manual check to an automated in-process gauge. There are several reasons for this trend, including higher quality standards, tighter tolerances, as well as running a leaner operation. The benefits are 100 percent inspection of the required geometric callout, as well as handshaking between measuring device and machine to make each piece better than the prior one. It also removes any bad parts.

The terms “in process” and “air gauging” may not immediately sound like they go together. Typically, in-process gauging is some form of contact gauge that is done very close to the grinding wheel or cutting tool. This process is very effective, but limited in what you are able to check. In most cases, you are simply checking a diameter. When air gauging is used in process, there is typically some simple handling system to remove the part from the chuck or centers and place it into the air gauge. Depending on the machine type, the air gauge may be able to measure the part while still being clamped into the machine. 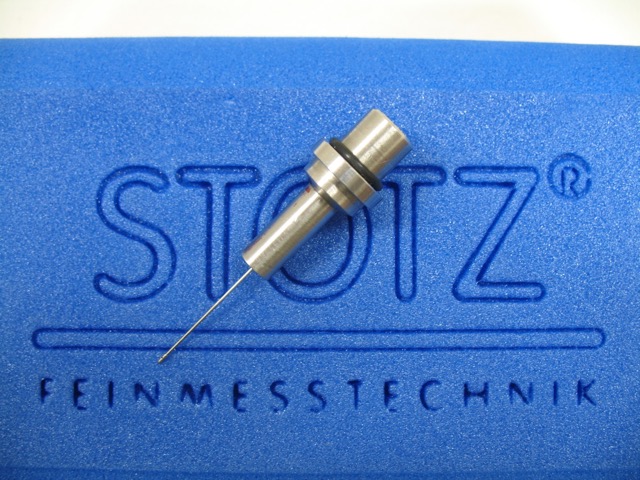 The Stotz air gauge tip directs airflow over, through, and around part geometries that are too difficult to measure otherwise, or cannot tolerate physical contact.

So, why would someone use air gauging instead of the usual contact method of in-process gauging? As I mentioned previously, the contact method is typically used for measuring a diameter and, in most cases, that is an outside diameter. Air gauging can be very effective at measuring more complex features, such as multiple diameter steps, tapers and more sophisticated geometric callouts, such as perpendicularity, straightness, parallelism and many others. It is also a very effective method for checking inside diameters, including extremely small bores.

Airflow and pressure are inevitably proportional in measuring, allowing for precise calculations of dimensions and contours.

You also get the other standard benefits of air gauging, which include: non-contact measuring, so you don’t mark the parts and wear out the gages too quickly; a high level of repeatability; and you can measure more complex features, because the air gauge is designed and built for a specific task. Most contact methods are available as an option on the machine and are limited to simple features only.

A typical setup of an in-process air gauge would consist of a lathe or a grinding machine turning or grinding the workpiece. Once that process is completed, the part would either be placed on/in the air gauge; or the air gauge would be placed on/in the workpiece through some simple handling device. We are finding that many times robots are already being used to load/unload machines and can simply be reprogrammed to handle the air-gauging task as well. 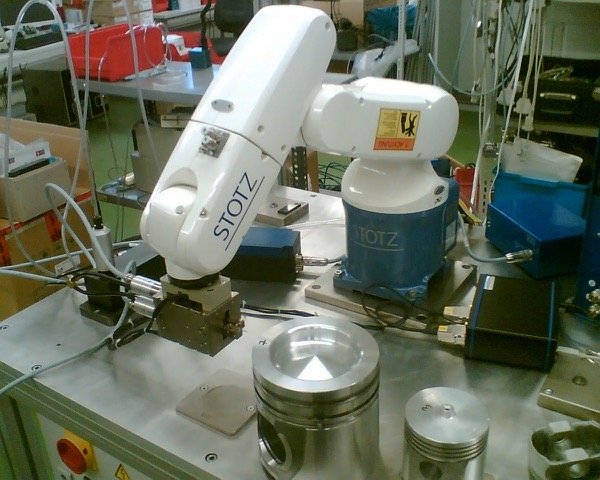 The air gauge column is then handshaking with the PLC (Programmable Logic Controller) or robot. The communication is typically handled through digital input/outputs. Common handshaking would include the PLC communication to the gauge column that the part is now in, and the initiation of the measurement. The column would then measure the part and send a signal to the PLC indicating that part as good or bad (accept/reject). The column would also send the offset values to the machine to make the next piece equal or better than the one just measured. This would typically be done either through the RS232 output or via Ethernet. The handling system would then remove the workpiece and place it in the appropriate location according to the good/bad signal it received. The column can also save the data to any standard SPC system. There are other options available, such as serial number tracking of each workpiece.

The return on investment (ROI) of this type of setup will happen much more quickly than you may think.  The benefit of inspecting 100 percent of your workpieces and automatically sorting the good/bad parts alone ensures that you don’t accidentally send a bad piece to a customer. That — coupled with the fact that you are automatically making offset adjustments, which means that each piece is equal to or better than the prior piece — would result in less scrap. Those benefits, and the labor cost saved from having a person or several people throughout a 3-shift operation manually checking each part, would justify the investment in a very short timeframe.

Your spindle runtime and workpiece output would both increase using this method, because, while you are measuring one piece, you are already making the next one. This ROI happens even faster if a robot for loading/unloading is already present in the manufacturing cell. If you have mid- to high-production parts that you are currently measuring offline using air gauging, you should give a serious look at automating the process.