Until now, many companies in the compressed air industry have implemented an approach where inadequate compressed air pressure (often caused by air leaks) is addressed by adding more supply equipment to the compressor room. A new company, called Advanced Air Leak Detection Services (ALD), solves compressed air pressure issues by focusing on demand-side improvement opportunities in compressed air systems. “Leak audits often assume all leaks will be fixed and include the recommendation of a new air compressor capable of turning the reduced air demand into energy savings”, says Jim Morgan of ALD. “The market seems to revolve around equipment sales and not system solutions and real results,” he continues, “Most companies have focused more on the supply side of the system, which in the end means capital purchases. There are many sales people out there claiming to be professional auditors, but with all the pressures from their suppliers - all they end up doing is proposing new capital equipment.”

According to Morgan, there is a problem with audits today where compressed air leaks are identified and tagged with the promise to reduce air demand. New equipment is purchased to better match demand, but all too often the leaks, artificial demand and inappropriate usages are almost never repaired so the energy savings aren’t realized.

ALD has the goal of simply turning existing air compressors off when possible, Morgan said. “Instead of adding supply equipment, we fix air leaks and incorporate high-efficiency air nozzles, blower packages point-of-use receivers.” These demand-side actions stabilize compressed air system pressure and this ultimately increases production output, reduces production down-time and spoilage costs, and decreases the power costs of the compressed air system. According to Morgan, “the key to a successful leak audit isn’t to identify the leaks. The key is to work alongside the maintenance staff to prioritize and schedule the repair of leaks, and then to maintain-the-gain.”

Why is stabilizing compressed air system pressure so vital to production? “If you have a high-speed application like can manufacturing, for instance,” Morgan explained. “And let’s say the plant’s pressure fluctuates between 100 and 115 psi, it can affect the bodymakers, the printing or the necker-flanger applications on the cans. When you produce 5 million cans in a 24-hour shift, steady pressure is critical. Often in today’s world, production equipment is set up to run much faster than the manufacturer’s - recommended speeds, which makes it more sensitive to air pressure. Any variations in pressure can cause the product to be off-spec and spoilage costs can and will skyrocket.”

Unstable compressed air pressure create significant product spoilage costs and production down-time. The presence of compressed air leaks, make it almost impossible to maintain steady system air pressure. “Stable air pressure is critical in industries such as foundries, food plants, and high-tech facilities,” according to Morgan. “A foundry has large stamping equipment to form large pieces of metal, for instance. If they are making bicycle cranks, they strike the piece of metal two to three times on each side to form the crank. These huge stamping presses utilize large amounts of compressed air, and have to strike the metal with equal force each and every time. If air, pressure is not stable spoilage costs are incurred and the press can fault stopping production.

The root cause of unstable compressed air system pressure is similar with all manufacturing facilities, Morgan said. “It’s a combination of root causes usually--lack of storage, air leaks, inappropriate end uses, poor controls on air compressors and inadequate piping or drops. It all contributes to unstable and inconsistent system pressure at the point of use.”

According to a study done by the U.S. Department of Energy, compressed air leaks represent 20-28% of total compressed air usage on a national basis. It’s an established fact and a number that has been proven again and again. “What’s more, those figures are based on air systems with good programs in place”, said Morgan. “We’ve seen much larger percentages with leak rates from 30-40% at some facilities.”

By implementing an air leak program which includes repairs, facilities can see immediate savings with project returns of 2 - 5 months, Morgan said. “A moderate size system utilizing a 150hp compressor can produce 650 scfm of compressed air. A system of this size with a 25% leak ratio can spend \$ 33,000.oo per year just on air leaks – the equivalent of 43 bhp of the air compressor. We go after that 25% and reduce it to a manageable leak rate (calculations are based on \$12kwhr, 8000hrs per year.)” 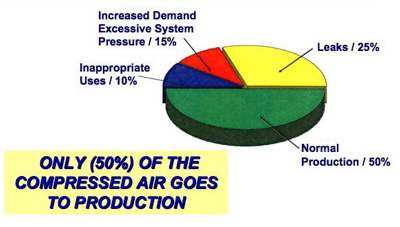 Work With Maintenance to Prioritize the Repair of Leaks

According to Morgan, ALD goes through an extensive step-by-step set of procedures to implement their leak reduction program. First, they analyze the supply station and compressor controls to create an energy base line. Second, they analyze the end users and their pressure requirements. Then, ALD also identifies secondary storage solutions throughout the plant during the walk through. Once identified and tagged a repair program is immediately implemented. This process varies depending on the size of the facility but can normally be accomplished in one week. It’s important to begin at the compressor pad data-logging and measuring the key performance indicators of the supply side of the system. “We then spend the majority of the audit learning everything we can about their production system needs, where the large air users are; where stable pressure is critical and where it isn’t; if they use poly tubing, quick couplers or if they hard piped to the production equipment.”

After many years of auditing and doing leak detection, Morgan is adept at knowing where to look. “Approximately 95% of leaks are found inside or around the production equipment. Only 5% are on the headers or the piping systems.” In order to find leaks in hard-to-reach places (often inside of production machines), ALD uses ultrasonic leak detection equipment capable of “hearing” the leaks from a distance. Utilizing their experience with the detection equipment, leaks can be prioritized as they are detected saving time and maximizing the value derived from labor costs for repairs.

There has always been a struggle to get leaks repaired. The key is to plan ahead and prioritize the repair of the leaks. ALD identifies the severity of leaks and puts them into three categories:

Category 1 Leaks identified as “Priority Repairs” are fixed the same day of the study. Morgan said, “We work with the maintenance department to plan ahead so that the priority repairs can be completed by plant personnel, outside contractors or our ALD mechanics determined by the clients preference – the same day as the leak audit.” Morgan continued, “We’re not concerned with who fixes the leaks-ALD provides the assurance that the job gets completed so the ROI is achieved.”

How to “Maintain the Gain”

Scheduled (Category 2) and lower priority repairs (Category 3) are placed into the ALD leak maintenance program. “We will come back two or three times a year to assure the tagged leaks are repaired,” says Morgan. “It is not uncommon for tags to be removed before repairs are completed, therefore, we go through our records to match the report with all leak tags so nothing is overlooked or missed.

When ALD revisits the facility as part of a maintenance program, they re-assess the supply equipment and system operation while reviewing the baseline. They then locate all tagged leaks which are still in the system, remove each leak tag, re-measure and retag. They also work with the local utility company to complete the rebate paperwork and do the measurement verification to maximize the rebate money for the client and ROI on the project.