Consumers are more educated today than ever before.  Learning that clean and dry compressed air quality means more consistent, higher quality product out the door, there has been a shift away from the use of black iron.  Aluminum’s light weight properties combined with push to connect metal fittings also have made assembly of the system easier and faster.

Coupled with the ever-rising cost of copper and the dangers of using plastics (including PVC which are not rated for compressed air system pressures and may not be compatible with air compressor lubricants), consumers are starting to request aluminum as a preferred piping system material.  Aluminum piping isn’t new, it’s been in the compressed air market for over 25 years. Recent years, however, have seen the growing consumer education translate into significant growth of this technology and  is now considered a high quality alternative material to the old Black-iron systems typically installed by Plumbing firms.

As consumer awareness of the attributes of aluminum tubing have driven its popularity, so have a swell of additional well thought-out questions.  One question is asked with regularity, “What is done to protect the inside of the tubing”? Even though most all aluminum compressed air piping systems feature a painted or powder coated exterior, the interior of the tubing has no coating.

The pipe exterior is coated for two reasons. The first reason is to add a distinct color to the tubing so as not to confuse it with electrical conduit or other utility. Our piping system, for example, is offered to customers in multiple standard color options for pipe identification, safety and esthetics including compressed air blue, vacuum grey, inert gas black and nitrogen green as our standard colors.

A second reason to coat the pipe exterior is to provide a consistent, esthetically appealing exterior.  As its becoming more common place for manufacturing and automotive facilities to have their customers take a tour, they want their facility to be dressed to impress.  With iron and copper, cleaning and painting headaches and cost are required. 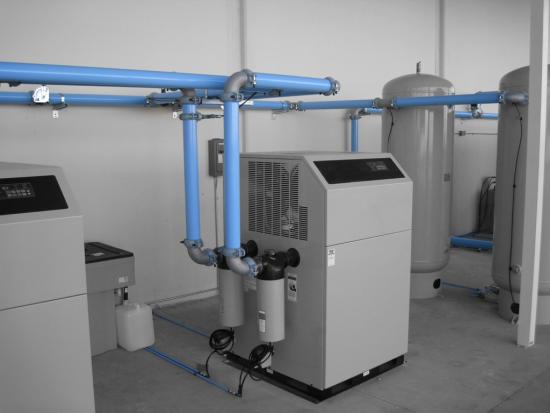 The Significant Difference Between Iron Oxide and Aluminum Oxide

When iron oxidizes it forms iron oxide - a reddish, powdery substance more commonly known as rust. This rapid process has likely started even before the piping is installed. Ambient conditions including oxygen and humidity start to oxidize the pipe creating what’s most commonly called rust. Flakes of rust form on the interior of the pipe. As the rust becomes more severe the flakes dislodge from the pipe exposing fresh metal, which immediately begins to rust. This cycle continues until there is no iron left. This flaking leads to a shrinking internal diameter of the pipe, increased turbulence and failure of mechanical devices due to rust particles clogging crucial equipment. Eventually corrosion of the Iron will lead to leaks causing pressure drop as well as loss of system efficiency and increased energy bills. The air compressor system will have to work harder to meet this artificial demand increasing energy costs.

When aluminum oxidizes, it forms aluminum oxide, an entirely different animal. In crystal form, aluminum oxide is classified as a corundum. Gem quality forms of this mineral are sapphires and rubies and it is among the hardest naturally occurring substances found on earth. Aluminum Oxide is used in many products such as sandpaper and even hard wood flooring coatings. If you’re looking for a strong, scratchproof coating, there’s none better than aluminum oxide.

Oxidization of aluminum forms a protective coating chemically identical to a sapphire.  It has a transparent to milky white color, is impervious to air and protects the surface from further corrosion.  Once a microscopically thin layer has formed, the corrosion stops. This nearly invisible barrier forms so quickly that aluminum will only oxidize on the surface, providing immediate protection from continued corrosion.

Anodized aluminum is a process which speeds up and controls the oxidized coating.  Anodized aluminum has been treated with an electrically charged acid to force the growth of an extra-thick layer of Aluminum Oxide.