During an Energy Review at a relatively new health care garment factory, in the Southwest, we found all three of the 100 psig nominally rated rotary screw air compressors were operating at 115-120 psig continuously. We asked the Production Superintendent if this was normal or if something had recently changed. He explained that initially they operated two air compressors but had to begin running the 3rd unit in ‘trim’ mode after some converting machines were up-graded. Then, a new larger converting machine was recently installed and air pressure quickly became a production issue. Since capital funds were tight, the project engineering team determined the third air compressor had sufficient capacity.

Why Are the Air Compressors Running at 120 psig?

Our preliminary investigation had revealed that all three air compressor systems were running at 120 psig ( with no significant operational issues ). System air pressure, however, out on the production floor was marginally low and causing on-going production quality issues. The air compressor motors had high ‘amps’ and high air temperatures and the dryers were overloaded due to high air temperature.

The project team apparently had not conducted a thorough due diligence of the entire system to determine if it could adequately supply a relatively higher system demand. At first glance, it did appear the three robust air compressors and dryers, with a 4 inch size main air header, should work! 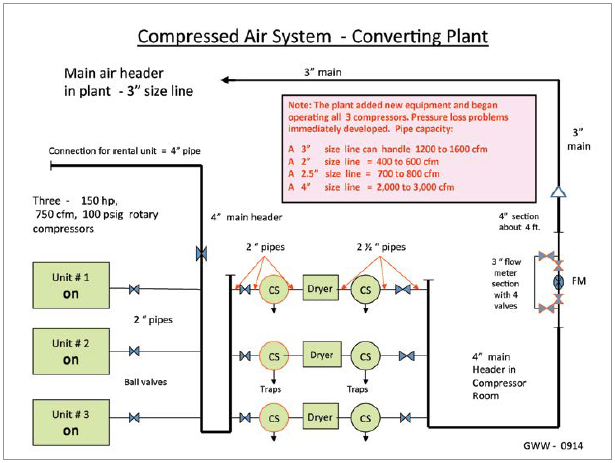 The air compressors and dryers had been installed in parallel mode to provide system flexibility. Piping restrictions (fittings and valves) at the compressors and the in-line filter and dryer connections were causing down-stream pressure problems with all three air compressors in service. More review confirmed the original design of the system was for only two air compressors to be in normal operation. But, since the 3rd unit was not fully loaded, the project team had determined (theoretically) it should be able to provide the additional capacity for the new converting machine. But, these unforeseen piping restrictions were causing compressors performance issues.

These relatively new air compressors (150 hp, 750 CFM ) were capable of supplying over 2,000 CFM to the plant. However each compressed air dryer line could handle only about 600 CFM before incurring excessive pressure loss. In addition, 400 feet of 3 inch main air line to the production area had a nominal capacity of about 1,600 CFM. The new converting equipment (300 CFM air usage) had overloaded the plant piping distribution system.

We recommended changing the valves and fittings at the compressors and dryers (from 2 inch to 3 inch size) and running a new 2 inch air line from the 4 inch main header (after the flow meter station) to the new converting machine. Pressure storage options were not viable because of the 3 inch header in Converting. We also recommended a formal Rental Compressor delivery “Plan” be established for major maintenance service and emergencies.

It took a few weeks to get funds approved and make the changes. Some preventative maintenance work also improved dryer performance. Later the compressors were back to operating at 95-100 psig ( with 85-90 psig in Converting ) and production returned to normal.

The main benefit to the plant was the production issue was resolved. Clearly running the ari compressors at 20 psig lower discharge pressures was going to be more efficient and generate energy savings. Moreover, every two psig drop in the compressor discharge pressure produces a 1 % reduction of motor power ( kWh ). 20 psig = 10 % power savings on the 400 hp load. In addition, compressors and dryers operating at 95-100 psig will have a much longer life and fewer maintenance issues than those operating at 115 to 120 psig.

Does your facility operate the plant compressed air system at 120 psig or higher? Is it really necessary to operate above 100 psig ? Do you know what critical plant process requires unusually high air pressure? Should you expect energy usage and production quality issues when utility systems are operated beyond their initial design conditions?

This type of situation can occur occasionally when manufacturing systems engineers manage plant expansion projects. They occasionally have tight project budgets and do not always conduct a thorough assessment of the plant utility equipment. It is the responsibility of site plant engineering to be involved and identify how new loads could impact the utilities: i.e., Electrical MCCs, Air Compressors, Process Water, HVAC, the Steam System, etc.

Our experience is that compressed air is the most-often overlooked utility.

Gary Wamsley is an Engineering Consultant at JoGar Energy Services in South Florida with over 40 years of industrial utility systems experience. For more information visit www.jogarenergy.com.