“For every complex problem there is a solution that is simple, neat and wrong.”

HL Mencken uttered those words over a century ago and they’re still just as true today as they were then. One of the most common problems in plants is low air pressure. One of the most common solutions is to purchase new air compressors. Often this advice leads to a poor return on investment with the company’s hard-earned money. Often the issues are related to demand, distribution, or both. Solving the wrong problem can be expensive from a capital and operating cost perspective. Determining root cause analysis may cost more up front, but will save tens if not hundreds of thousands of dollars long term.

When Compressed Air Distribution is the Main Culprit

Pressure problems were the reason our very first customer ever called us. This cement plant had an issue where lower air pressure intermittently affected the operation causing a rework issue on an irregular basis. When low air pressure occurred in the silos, where trucks were loading, one of the valves responsible for feeding the cement into the truck did not have enough pressure behind it to close. When this happened, the operator had to run up a flight of stairs and manually close the valve. In the meantime, the contents in the silo would continue to spill out on top of the truck.

A local air compressor company performed an analysis determining there was insufficient capacity. It was decided additional compressors and dryers were required to solve the problem. The solution was in excess of \$100,000. 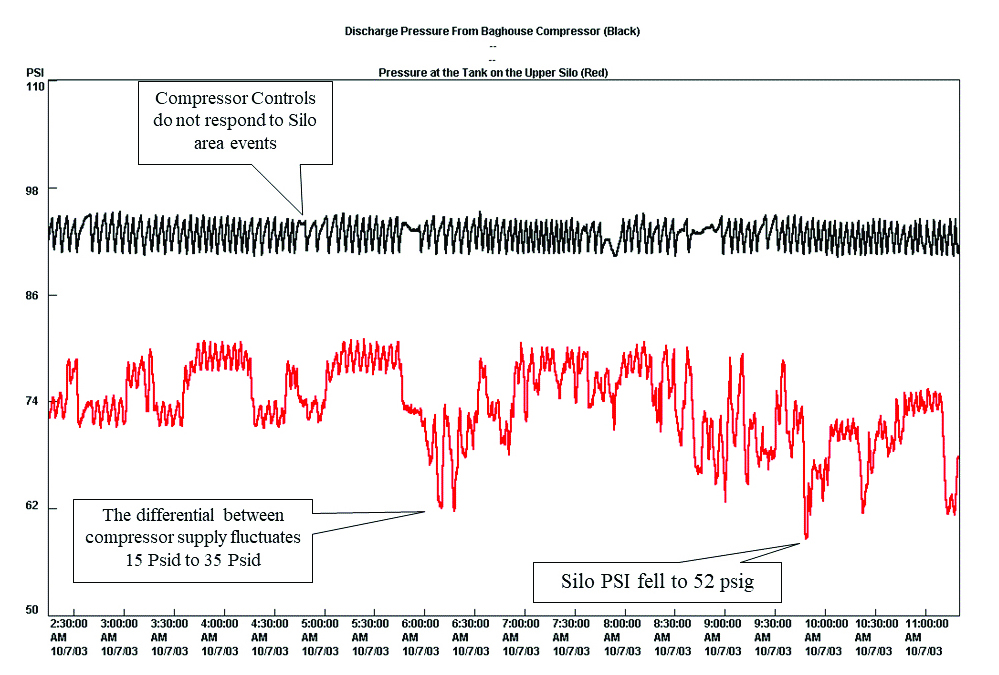 If the issue had been a supply problem, the red and black lines would have run parallel to each other in the graph. If there was insufficient air in the compressor room, pressure would have fallen in all areas of the facility. The increase in differential pressure between the two areas indicates there was a problem on the distribution side and not one of capacity.

The piping distribution to this area of the plant then mapped out the individual areas examined. When root cause analysis was performed, the distribution problem became obvious. The picture below shows the distribution system feeding the area where trucks loaded.

Instead of there being one problem, there were multiple issues contributing to the intermittent pressure problem.

Instead of purchasing a new air compressor, the client only needed to fix the distribution problems. This would save over \$100,000 in capital avoidance. The original configuration offered by the compressor company would have actually increased the operating cost of the system. Fixing the distribution problem had no net effect on overall operational cost making it a win-win solution from an operating cost capital and capital avoidance perspective.

A cement import terminal had all the usual productivity problems one develops with moisture in the air such as sticky valves, small boulder formation in the silos, blinding in the baghouses, etc. 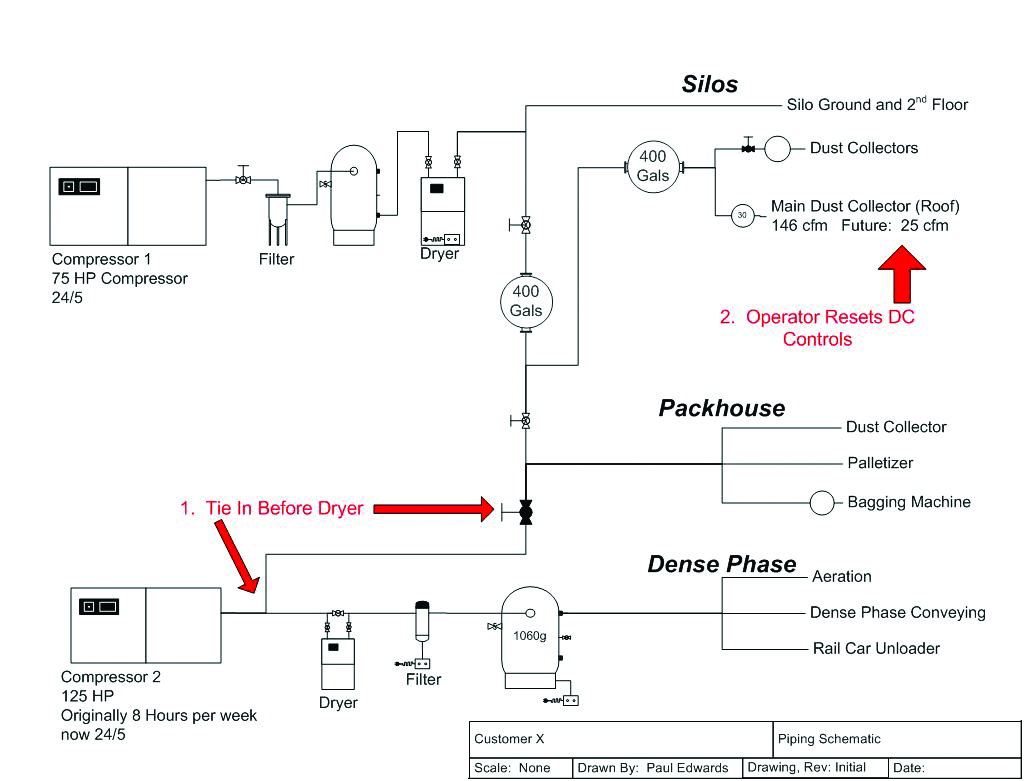 Their sister cement plant had recently hired Compressed Air Consultants (CAC) to audit their system and were pleased with the results. The terminal called CAC to talk about their problems. In the ensuing discussions, it was discovered the plant used to run solely on a 75 hp and the 125 hp was only used when the plant was blending cement for the bagging operations.

The plant had three basic modes of operation: Standard operation (ship unloading and truck loading), bagging operations, and shut down. The plant had two primary problems. The first was an air pressure problem at the top of the load-out silo while moisture was a problem throughout the facility.

The plant originally ran on a 75 hp air compressor by itself with a 125 hp machine operating only during the bagging operation to feed the blenders and dense phase transporters. This only occurred less than 5% of the week. Over time, the plant found it couldn’t run on just the 75 hp and had to run both compressors, yet there weren’t any new applications in the plant.

The local compressor company performed a supply side audit and recommended an additional compressor and clean up equipment plus adding additional piping to the top of the silo. The total cost for this retrofit was \$40,000 to \$60,000 with an increase in operating costs of over \$15,000 per year

The client wasn’t convinced the problem would be solved so they elected to have a full system audit performed by an independent auditor to look even deeper. It was money well spent.

CAC worked out two different scopes of work. One was to focus exclusively on the moisture issue. The second one was solving the moisture issue while figuring out if it was possible to turn off one of those two compressors for significant periods of time.

Given their operating costs were estimated between \$60,000 and \$80,000 per year, performing a massive audit didn’t make any sense due to cost issues. However, when there are only two compressors running a system and the goal is to turn off a compressor, it was highly likely some demand side work had to be done. A specific scope of work was developed to accommodate the plant’s unique situation.

The terminal elected to go with the more detailed look at their system and the results were surprising indeed.

As it turned out, a dust collector consuming excessive amounts of compressed air caused the pressure problem at the top of the silo. In fact, its current setting had it consuming roughly 125 scfm more than it was designed for.

How the system got to this condition was less than obvious. At some point in the past, the 75 hp had failed. While it was down, someone made an emergency connection to the 125 hp system. As described already, the connection was made upstream of the dryer - providing wet air to the entire plant.

The dust collector operator didn’t know why the air was wet but he knew his bags were blinding due to the water. The only way to keep the bags dry enough to work was to change the settings to the point where the dust collector was pulsing too long and too often. This increased the demand to the previously mentioned 125 scfm.

The increase in flow to the top of the silos increased the pressure drop to the same dust collector - further exacerbating the problem.

When the 75 hp was repaired, it was turned back on and the 125 hp shut off. As you have already figured out, pressure dropped throughout the facility because no one changed the dust collector settings. This new load overloaded the 75 hp. So what did the plant do? Turn on the 125 hp to supplement. Since the control settings on the 125 hp were higher than the 75 hp, it attempted to carry the load in the plant resulting in wet air continuing to be fed to the dust collector.

One of the internal processes on the main system during standard operation was way out of tolerance. Instead of consuming 25-40 cfm as it should have been, it was consuming 150 cfm. The incorrect operation of this equipment was enough to force the plant to turn on the other compressor when intermittent events pushed the system to the limit and this application fired off.

Moisture was also caused by the installation of the 125 hp, as the room temperature of the 125 hp was excessive. This system was placed in a silo just like the 75 hp system. The difference was the 75 hp was in a far bigger silo with a greater transfer of air in it allowing the 75 hp and its dryer to operate at lower temperatures. The 125 hp therefore fed even wetter and hotter air to the main system since its after cooler wouldn’t be as effective. It also meant the air being fed to its own system (blender and dryers) was so hot the refrigerated air dryer couldn’t do its job providing less than adequate air quality to the system.

Reducing the demand on this application combined with some other infrastructure improvements (piping, controls, storage) alone was critical to turning the compressor off. If the auditor had stayed in the compressor room only, they would have never realized the potential operating cost improvements.

The audit determined there was a ROI project that solved the moisture problem. This is due because the improvements in supply, distribution and demand would allow the plant to run on one compressor during standard operation. This not only reduced operating costs but also would increase the longevity of the compressors and allow scheduled maintenance to occur during normal working hours.

In the end, attempting to solve the pressure problem in the compressor room would have resulted in a \$50,000 project. This would have increased operating costs for a negative ROI. By looking at the demand side to solve the pressure problem, it was discovered \$500-$1000 of piping could reduce operating costs by over \$20,000 per year. Since the project return was as high as it was, it allowed the plant to create a project where the air pressure and moisture problems were solved while increasing the reliability of the system, equipment longevity and maintenance cost of the projection machinery. The final estimated savings was \$32,000 per year (46%) with a 22-month payback.

Far too often, compressed air pressure issues are assumed to be supply side related. While adding new compressors may solve the problem, it can often mask the root cause driving operating costs up while spending unnecessary capital. In some cases, the capital expenditure doesn’t solve the problem leaving the plant back at square one. If you have low air pressure issues, make sure you examine supply, distribution and demand to determine the root cause.