The Challenges of Auditing Compressed Air in Chemical and Petrochemical Plants


Compressed air audits for chemical and petrochemical plants have many characteristics in common with audits in other industries, but there are some differences in the way these businesses run that impact the goals of the typical audit and how that audit is conducted. In chemical and petrochemical facilities, the reason for auditing the demand side is different than that of other industries. Additionally, there are frequently applications with opportunities for improvement that are not always seen in other industries.

For starters, chemical and petrochemical facilities are often motivated differently than other industries. There is an even greater emphasis on safety, process stability and system reliability. While these plants like projects that reduce cost, they are much more interested in projects that enhance reliability while reducing costs. Focusing on reliability from a system perspective is of much greater interest to these plants than simply fixing leaks, saving money on lubricant, or other cost-reduction projects.

The plant’s emphasis on safety and reliability often creates opportunities and issues not seen in other industries. As a result, creating the greatest benefit for the client requires having an open mind. An auditor must recognize the challenges and limitations of these facilities’ business and technical processes, and address them in the system audit.

To start with, chemical and petrochemical process facilities deal with personnel and process safety related issues that are much more rigorous than other industries. Safety training is more than just a site orientation. It can require several days, depending on the activities to be performed onsite, and it requires attendance at an annual refresher course.

Many of these facilities also have safety-instrumented systems that must remain highly reliable/available. These systems often require a strictly controlled minimum compressed air pressure to function properly. For example, the installation of monitoring instruments, even those used to passively collect data from the system, often has to go through a rigorous process for approval. First, the type of instrumentation is evaluated to ensure that it is appropriate for the area of the plant where it will be used. Second, the permitting process will often require an evaluation of how the effort to measure something could potentially impact plant operations. This also means that the pre-audit stage can be incredibly important for improving the efficiency of the audit itself.

Entry into various areas of the facilities often requires some type of sign-in, as the plant has to be able to account for the whereabouts of all individuals onsite at all times. These stringent requirements can often double the time requirement of a particular task or tasks in the facility.

Plants often develop standards in the industry that can have some peculiar effects as well. Some of these standards can result in rather odd circumstances that the compressed air professional doesn’t necessarily run into on a regular basis. For example, one plant we worked with has a standard stating any compressed air equipment, owned by the plant, must be rated as a Class I, Division 2 installation, substantially increasing the cost to purchase and maintain the equipment. Whereas, the facility’s standard for a rental compressor did not require the same hazard rating.

This created a negative incentive for the plant to install its own equipment. In this particular case, the facility was spending over 1 million dollars per year in rental fees. The audit put together a project that improved the reliability of the overall system, all while taking advantage of the financial burden that the rental compressors created. The project provided an exceptional Return on Investment (ROI) that had support throughout the organization. While the project is still in the approval phase, the client agrees completely with the assessment. In fact, the facility management is currently trying to evaluate whether or not their internal standards can be relaxed to provide an even better ROI.

Auditing the distribution system of a chemical or petrochemical facility is a bit different than other industries as well — for several reasons. First, the size of the facility requires extremely long runs of pipe, meaning pressure drop can be an issue — especially in the remote area of the facilities. Some plants get around this by having multiple compressor rooms. Coordinating the behavior of systems with multiple entry points can be difficult, and a well thought-out plan can be the difference between success and disaster.

Systems with distributed supply points can have pressure drop issues also. Often, there is tremendous value in installing pressure loggers throughout the facility and at the end of the various areas to see how pressure varies in the facility. We’ve seen plants where the entire facility is elevated 3 to 4 psi because of pressure drop in one small area. And in systems where the supply side is large, optimizing a small percentage of performance can be worth hundreds of thousands of dollars. Another common source of excess spending is a “compressed air at all cost” mentality, which results in redundancy upon redundancy and adds cost without increasing reliability.

Auditing the Demand Side — It’s Not Always About the Money

Auditing the demand side of these plants is different too. If reliability is the primary goal, then the value of reducing demand may be less dollar-driven. For example, reducing demand may result in lower pressure drop to a particular area of the plant, resulting in a more repeatable performance of control valves. In systems where the demand has grown larger than the dryers’ ability to handle it, reducing demand can result in less moisture formation in the system. And, at the risk of stating the obvious, enough demand reduction can put compressors from operating positions into backup positions.

The applications in chemical and petrochemical facilities are not seen in general industry. With that in mind, research is often required, as you often find fairly unique applications that aren’t common across all industries.

For example, cameras and other imaging devices come from a wide variety of suppliers and have multiple model numbers. These capture images or measure ultraviolet (UV), infrared, or visible light so that operators can understand what is happening in a given process. To provide an end user with the best “view” possible, air is often introduced into the sight tube to keep debris and, in some cases, heat away from the lens.

OEMs each have their own air requirement, and it is often unknown or ignored at the plant level. A fairly typical pressure requirement for some of the UV and infrared instruments we have seen is 3 to 5 inches of water column above the chamber pressure. In the case of some cameras, the OEMs want 5 to 15 psig. One of the reasons for the difference is that the compressed air is acting as a buffer for temperature. With a lens cost of \$8,000, users often exceed the recommended air pressure just to make sure.

One way of dealing with the instrumentation can be seen in the setup displayed in Figure 2. 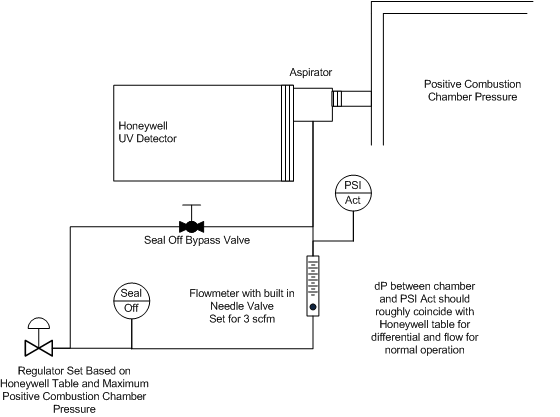 Another fairly common application in chemical and petrochemical plants that has great potential for improvement is air sparging. In this process, air is fed into a tank or vessel to mix contaminant-free air into a tank, helping to reduce the concentrations of volatile organic compounds (VOCs) in the container. Blower air can often be supplied instead of compressed air, but the energy savings in and of itself may not be enough to convince the plant to make the move. Often, an increase in reliability combined with the energy savings motivates the client to move forward.

Figure 3: Installing a blower for sparging with compressed air backup 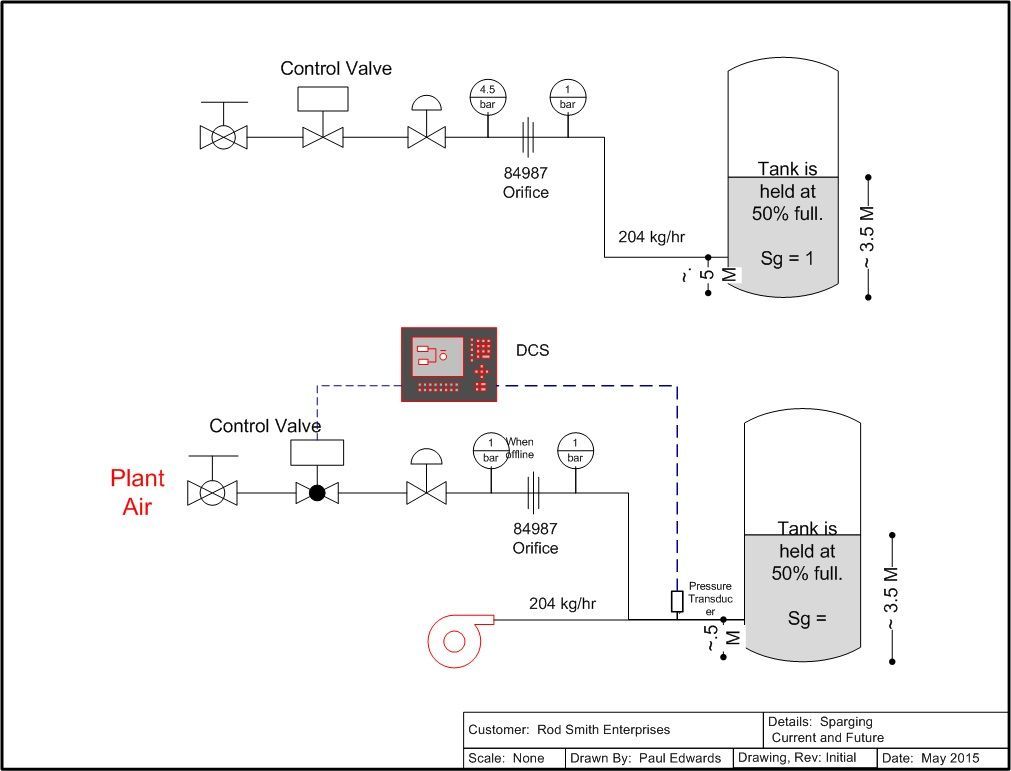 In the setup shown in Figure 3, the plant was using compressed air to sparge a tank with a product of one. The height of the water column was roughly 10 feet, suggesting that blower air could provide the necessary air to the tank. The solution the plant and the auditor developed was to provide a blower with the compressed air as backup. The plant’s internal distributed control system (DCS) system would monitor the air pressure in the supply line. If pressure dipped below an acceptable level, the solenoid valve would open, allowing the plant air system to act as the backup to the blower system.

(It should be noted that when replacing compressed air with blowers, consideration for blower air temperature should be made. Compressed air is usually close to ambient temperature, while blower air can be much higher than ambient air when located near the application point.)

Auditing chemical and petrochemical plants is indeed a challenge — both commercially and technically. The size of the systems and the magnitude of the problems mean that the potential return can be massive, which provides plenty of incentive for the improvements. It’s often important to have as wide a view of the problems as possible, maintaining focus on reliability gains as much as cost reduction.