A chemical packaging facility had done everything right when they last upgraded their compressed air system a few years ago. They installed a Variable Speed Drive (VSD) air compressor and implemented other energy efficiency measures, but plant expansions caused increased system demand, which exceeded the capacity of the system. The packaging lines were now seeing low pressure, causing shut downs in production. And projections showed plant demand would increase even further.

This article discusses the upgrades to the system and energy efficiency measures applied to address the plant’s issues. As a result of the improvements, the plant saved 41% on their previous compressed air-related electricity costs and better stabilized their air pressure. 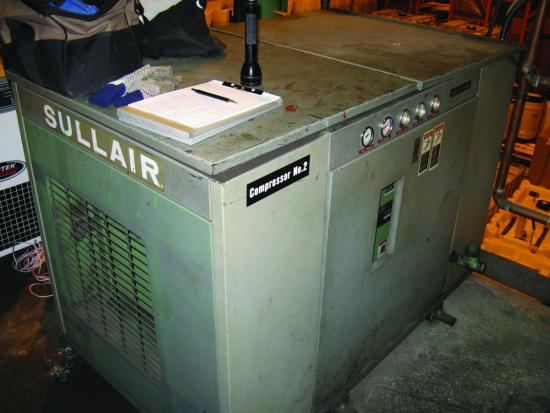 The growing plant had upgraded their 30 horsepower (hp) modulating screw air compressor quite a few years earlier and added a 40 hp VSD air compressor with a smaller 25 hp fixed speed unit. That project gained them large capacity and energy savings. In addition to the new air compressor, the plant added cycling dryers, a larger storage receiver, and a pressure/flow controller to keep the air compressors running well, and to reduce plant pressure to a constant lower level, saving on artificial demand.

Back in the early days the production shift was eight hours per day, five days a week. But as plant output increased, the plant updated its production schedule to 24 hour per day, five days a week. Peak plant flows started to increase little by little, until gradually the capacity of the existing system was exceeded. When this happened, the plant pressures started to drop to as low as 65 psi, at times, because the air compressors could not keep up. As a result, plant managers called in a local compressed air auditor to do a study. 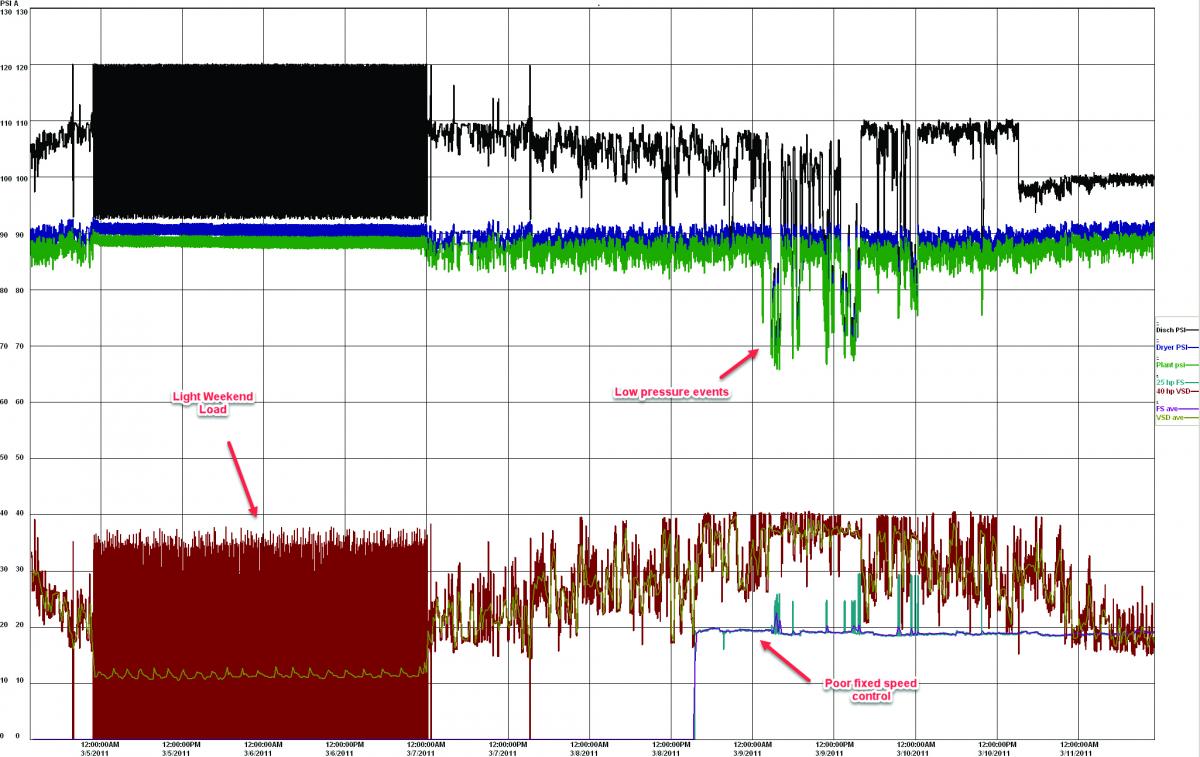 Figure 1: Low-pressure events at the chemical packaging plant led to production shutdowns and the need to evaluate compressed air supply and use. Click here to enlarge.

The goals of the compressed air scoping study were as follows:

The readings and observations during the measurement period showed the compressed air system was operating at lower efficiency during peak operating times and good efficiency during average operation compared to similar optimized systems. It also showed small improvements were possible. In general, the study suggested better operation would be gained if the existing or new air compressors had the pressure settings properly coordinated so the fixed speed unit would not load and unload when it runs. It could also be set high enough to better contribute to adequate air pressure.

Data loggers were used to monitor the electrical input to the compressed air system in order to calculate the approximate annual electrical operating consumption. The data showed the annual energy consumption for compressed air was about 200,600 kWh with a peak demand of around 50 kVa. Average facility air loading was measured at about 76 cfm. Sustained peaks were seen around 200 cfm.

Analysis of the information collected showed some potential opportunities that would result in improvements in the operation of the compressed air system. It also showed potential savings in compressed air related electrical and maintenance costs of up to 37% of the base costs.

Opportunities for Savings with Supply-side and End-use Measures

The audit showed multiple opportunities for savings. A thorough assessment of the complete compressed air system led to the following recommendations:

Figure 2: The recommended control band places the VSD inside the pressure band of the fixed speed compressors.

Air compressor hours – The auditor noticed there was no production on the weekend. The only load on the compressed air system was some heating and ventilation dampers and the dry fire system, both of which are very low loads that could be supplied by a small reciprocating air compressor. This would allow the main system to be turned off on weekends.

Backup capacity – The system peak capacity was measured at slightly over 200 cfm, but the backup air compressor had only 100 hp capacity. This did not provide good reliability should the 40 hp VSD need to be shut down, or serviced. The 200 cfm peak meant both air compressors needed to run during peak demand.

Reduction of leakage – The plant leakage was measured at 25 cfm, which worked out to 30% of average system flow. Some reduction of this would save energy by reducing the air compressor loading. 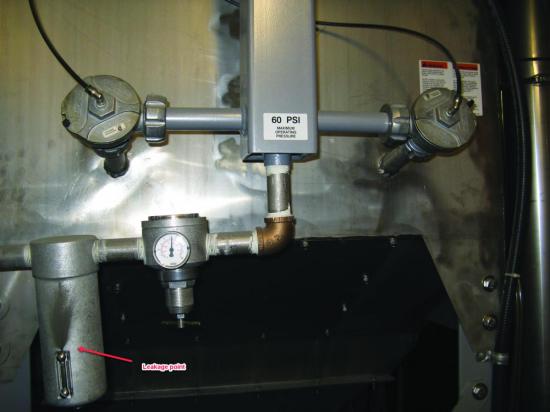 A poorly adjusted blast valve and leakage created problems with this dust collector.

The study predicted the recommended changes would reduce the electrical consumption of the compressed air system by 37% over the existing system and improve the air pressure. 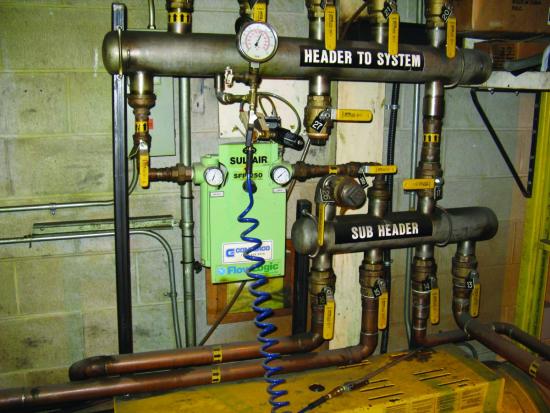 Plant management decided to upgrade system capacity by installing a larger 75 hp air compressor. The unit was installed with large storage capacity sized so the air compressor would start/stop with a low frequency if it ever ran at below minimum speed. It turns out with the reduction of the leakage and end uses the operation was frequently in this range. Operation at below minimum speed is not typically recommended because the air compressor will not build up enough heat to drive off any water that condenses in the lubricant. 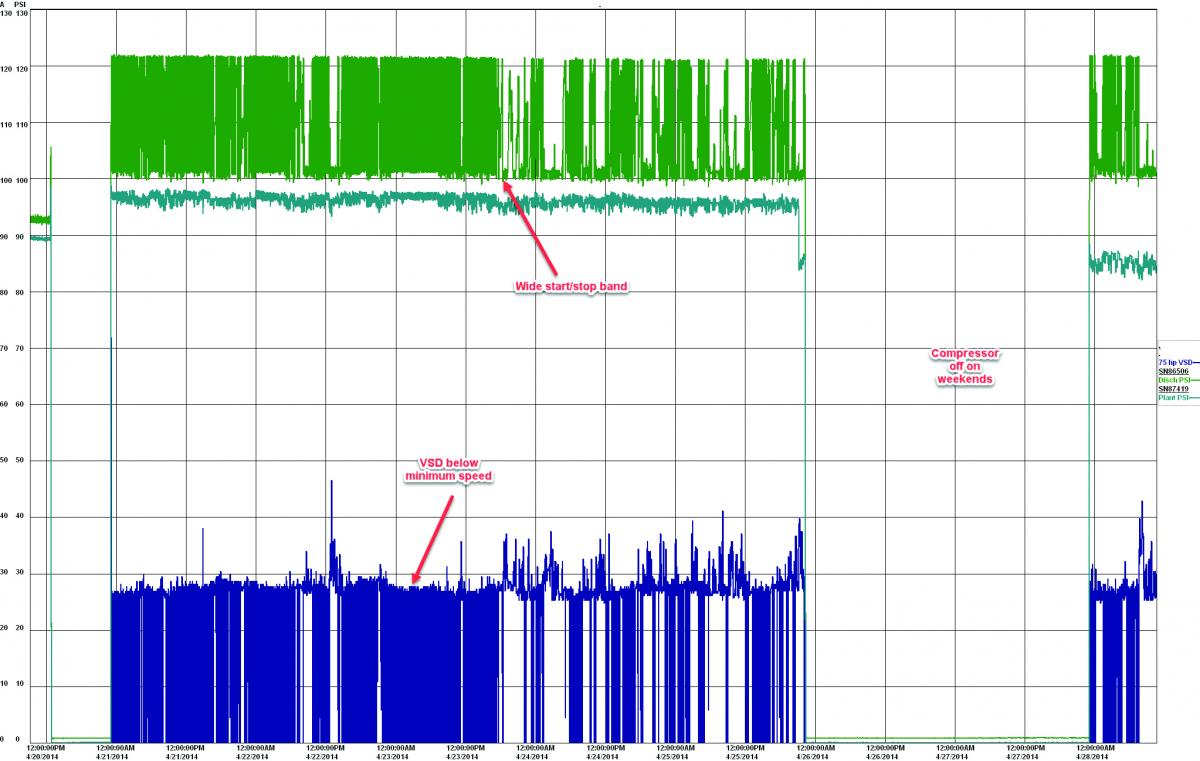 Final numbers showed this project yielded higher savings than expected. Savings of 101,000 kWh were gained, saving slightly over \$10,000 in electrical costs per year. Average load fell to 57 cfm with peak flow of 150 cfm. This load reduction meant the previous system would have been able to supply the plant, but production increases were planned so a larger air compressor was purchased. The power utility granted a financial incentive of over \$16,000 to help pay for the project.

This project showed the value of bringing in a compressed air auditor to have a look at the system. Often only the supply side of the system is looked at, with potential end use and leakage reductions overlooked. It pays to evaluate the complete system. Often end uses yield significant savings that can reduce electrical cost and qualify the plant for a larger financial incentive from the power utility.