Compressed Air System Drawings: A Picture Can Save Tens of Thousands of Dollars


There are some fundamentals when it comes to compressed air system improvements. One strategy that is overlooked is just drawing the details of whatever aspect of a system you are looking at. It is fairly common to see a misdiagnosis of some particular technical issue that would have been obvious should someone have created the drawing to describe the problem.

Sometimes data is required to be overlaid on the drawing but the combination often can combine to make something obvious. This happens whether the problem is in supply, distribution, or demand. Too often, the plant engineer, service technician, sales engineer, or auditor are in such a hurry they miss fundamental information that would have allowed the solution to be properly assessed.

One plant in Europe had two dilute phase conveying pumps which required seal air to protect both the  pump’s motor and outboard bearings. In this particular pump design, they are able to use an air source from the pump conveying system or compressed air. In both systems, piping was set up so the blower air would always serve the discharge bearings and the plant had an option to use compressed air or the blower air on the motor bearings. This set up is shown in Figure 1.

When the drawing (Figure 2) was created for the pumps, it was obvious the plant was wasting money while there was significant risk for a catastrophic failure.

The drawing also allowed that the solution would communicate the required changes, which included automating the feed air, regulating the compressed air while adding a check valve to ensure compressed air could feed the outboard bearings but not the blower system.

This particular plant was suffering from low pressure and was convinced the problem was the piping system. The auditor agreed to do a pressure drop map to help pinpoint the problem as he was suspicious the issue was something else. The best guess was the plant was consuming 800 scfm to 1,400 scfm and the piping system consisted of a three-inch loop system.

The pressure map (Figure 3) showed there were pressure issues in the air compressor room (not shown) but the bigger problem was in the distribution system as the plant suspected. However, the problem wasn’t in the main loop but in the individual branch lines. This drawing made it clear to the plant where the issues lay and that no modifications would be required to the main piping system. 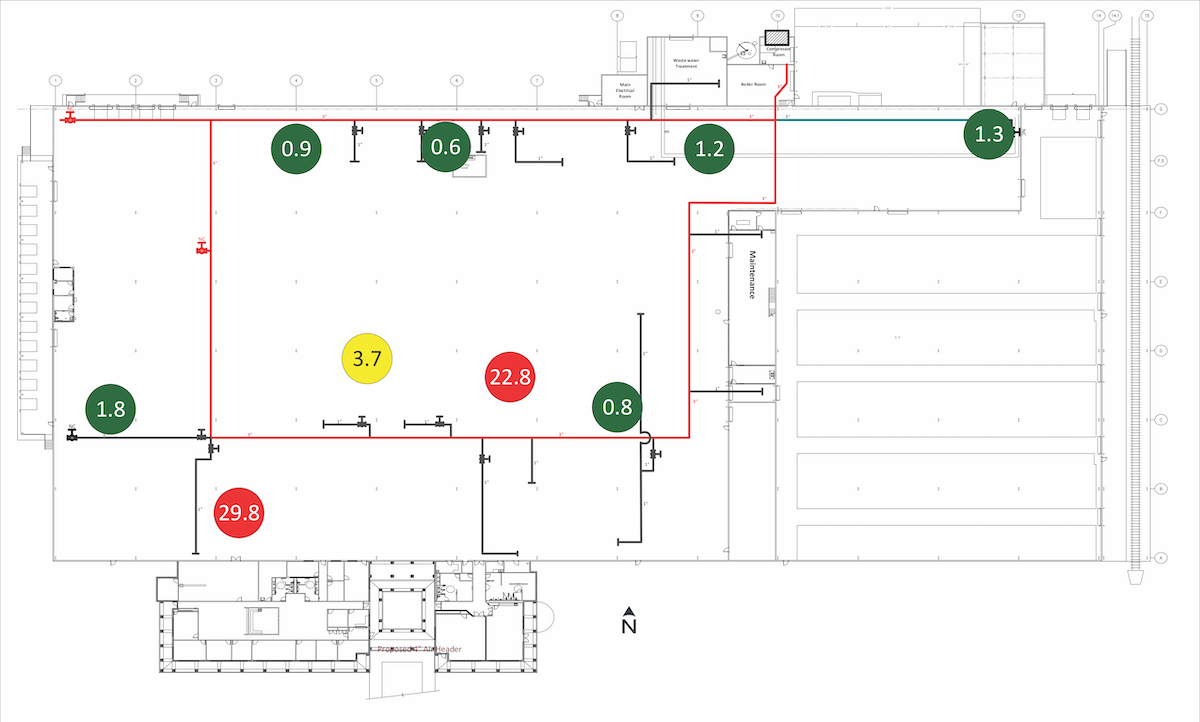 In the next example (Figure 4), there were numerous problems for this particular facility including wet air throughout the plant. The plant had called the local air compressor company to evaluate low air pressure and wet air throughout the facility. The plant originally had two systems serving different processes within the facility. The first was the area serving the trucks loading cement. The second was a bagging operation that included dense phase conveying. 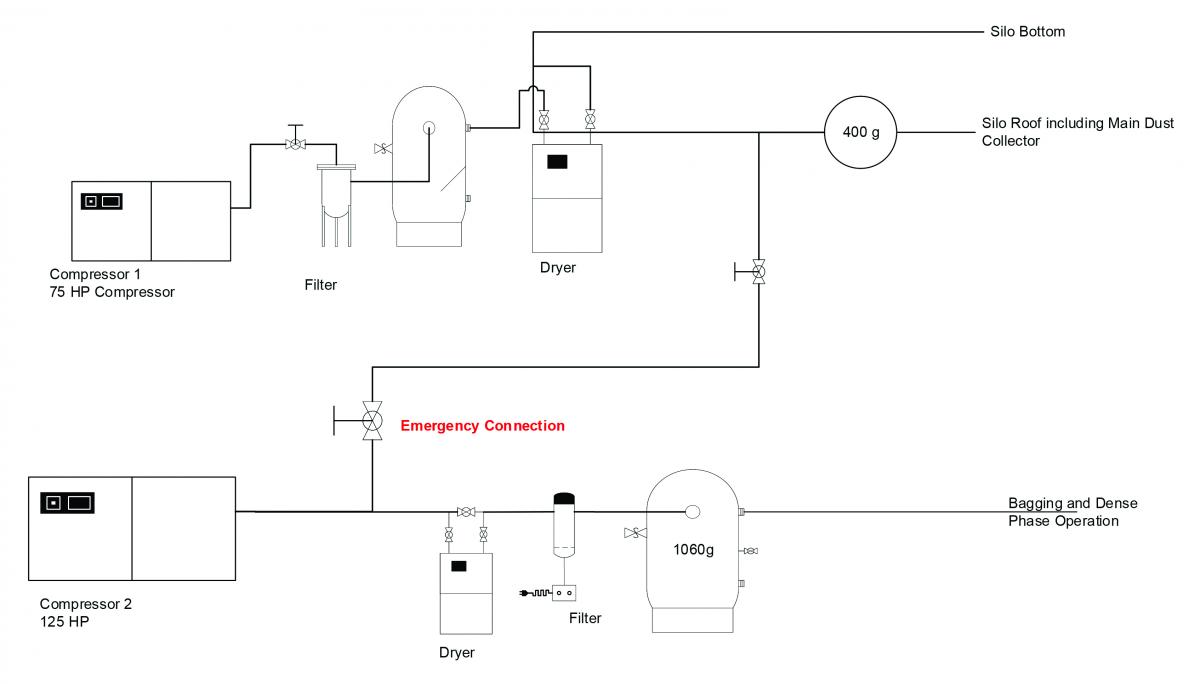 At some point in the past, the truck-loading air compressor failed and an emergency connection was made between the two systems. The individual responsible for making the connection was unaware of the importance of tying into a spot where the air had been dried, and as a consequence, made the connection upstream of the dryer. When analyzing the wet air in the system, the air compressor company assumed the problem lay with the dryer technology, and as a consequence, their solution was to add a desiccant dryer when a refrigerated air dryer would have been perfectly sufficient.

This root cause was missed and, as a consequence, other parts of the system were not sufficiently examined. This led to a recommendation for a \$50,000 project that would increase operating costs by \$20,000 to \$30,000 per year. Understanding the real root cause would have allowed the plant to fix the problem for \$1,000 to \$2,000 and decreased the operating cost by more than \$10,000 per year.

Sometimes, troubleshooters neglect to create a drawing regarding a technical matter. Whether it is to save time or that the individual doesn't think the information is important to understand precisely, the consequences can cost tens of thousands of dollars in capital and tens of thousands of dollars in operating costs annually if missed. Any technical problem that has a substantial economic consequence to a plant is one worth putting onto paper.

Paul Edwards, with 39 years of experience in the compressed air industry, is the principal at Compressed Air Consultants, email: paul.edwards@loweraircost.com, tel: 704-376-2600, or visit www.loweraircost.com.