Most industrial systems like compressed air have essentially random demand if you look at the long-term life cycle of the system. Hundreds, even thousands of independent small and large subsystems require constant or varying flow. These demands are typically not timed or synchronized with each other, so they aggregate to a fairly random flow profile, within a range. That range changes significantly when production processes change. Certainly a 2-week audit might show some patterns that appear predictable for demand A (“production”) and demand B (“non-production”) or day type, but they change over time as the plant adapts to new production systems and removes old ones. If demand was that profile forever, a lesser experienced auditor might be tempted to size one set of compressors that work perfectly for that profile but not for alternates.

Thus, typical industrial compressed air systems should be designed for the full range of flow, plus growth, with all flow changes and ranges possible, at one constant pressure, not just the flow ranges and changes seen in one 2-week audit. This usually results in a multiplex system of some type, typically with similar size and type compressors that are rotated and staged by an automation system.  In the cases where VFD or centrifugal compressors are included, special design criteria exist (see previous ABP articles on “Screw Compressor Control Gap”, “Centrifugal Compressor Control Gap” and “VFD and Master Controls”).

In some general compressed air systems, one dominant process “shocks” the system, creating a peak that is 2X or more of the normal peak, special design criteria will make the above system less than ideal.  It could be transport air in a materials processing company, test air in a microelectronics fab system, or sandblasting in large metal fabrication. In the case of large sandblasting systems, the peak can be well over 10X the non-sandblasting demand.  In this article, I will discuss a real system that has a 34:1 peak to average, and how to save 70% energy even beyond “best practices” with a VFD compressor. There is no VFD compressor on the market that can flow that range!  A different type of system design is needed for these large sandblasting systems.

In the heavy fabrication business, large weldments are created for structures so large that they can only be transported by barge, so they are located at port facilities. These huge fabrication shops build or repair large boats or structural weldments for permanent structures.  In this example, the final product is a bridge structure over 100 ft long by 30 ft long weighing more than 10 tons.  Before welding, the large pieces need to be sandblasted.  Sometimes they are blasted afterwards also. Huge sandblasting areas which the workers work inside of are built, and dedicated sandblasting “pots” are designed and installed.  In order to blast a larger surface area in a time-efficient manner, the nozzles used for these types of systems are often quite large, sometimes more than 0.50” diameter.  The system we are looking at in this article had four large nozzles. At the time of the audit, 0.625” nozzles with air flow demands of about 500 scfm each were tested. These were the largest ones in inventory. See Figures 1. At the time of the photo, small sandblasting was occurring, using a much smaller pot and nozzles. 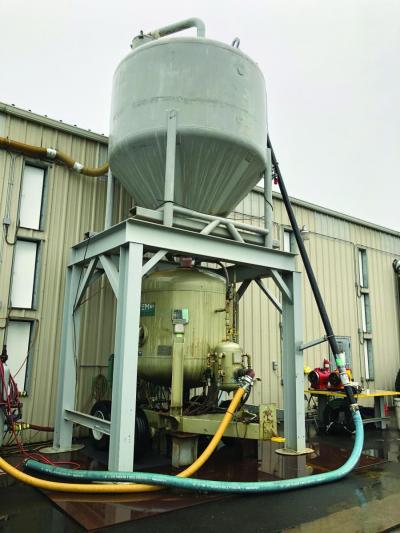 Since the large pot was designed for four 500 scfm nozzles, 2,000 scfm peak, a 2,900 scfm compressed air system was matched to it. That same system provides general air for small demands such as maintenance and the dust collector. The system had the best-available efficiency compressors, 2-stage oil-lubricated screw with a VFD.  However, it was designed for peak, not the off-peak times. The largest available unit from the local supplier was rated for 1450 scfm, so two units were installed, one with a VFD and the other fixed speed.  They were plumbed to a 3,250 scfm cycling refrigerated dryer and mist eliminator. See Figure 4 for a system diagram.

In a nearby light manufacturing building, a 50 hp load-unload compressor with dryer is installed. The compressor was very lightly loaded. See Table 1 for a summary of equipment and Figure 2 for a system diagram. 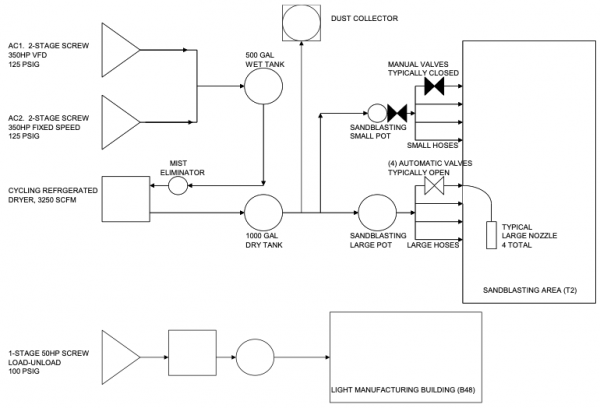 At the beginning of the audit, it was not clear how often the large sandblasting would occur, if at all. Production orders for larger fabrication items was less at the time. The small pot was being used most of the time, however. Since a preliminary measure was to use an on-demand control system with a smaller compressor running most of the time, and there already was a smaller system nearby that might be integrated, we monitored both systems at the same time. The following data collection, together with testing was done:

The trend data showed that the large pot was used only four times in two weeks, a total of 1.8 hours, or only 1.1% of the time! The small pot was used only 14 hours, only 8.4% of the time. The system was pressurized 49.5 hours/week, 29.5% of the time. A large VFD compressor was running at min speed and loading. Although the large compressor is fairly efficient in its peed range, it is not at the low end, requiring an average of 32 kW to supply 42 scfm of mostly leaks. If the primary compressor was not a VFD, it would be far worse, about 200 kW at that load.  Trend data also showed that the large nozzles leaked, and were not de-pressurized automatically.  See Figures 3 to 4 for a summary. “T2” is the name of the large sandblasting system.

The existing system performance is as follows: 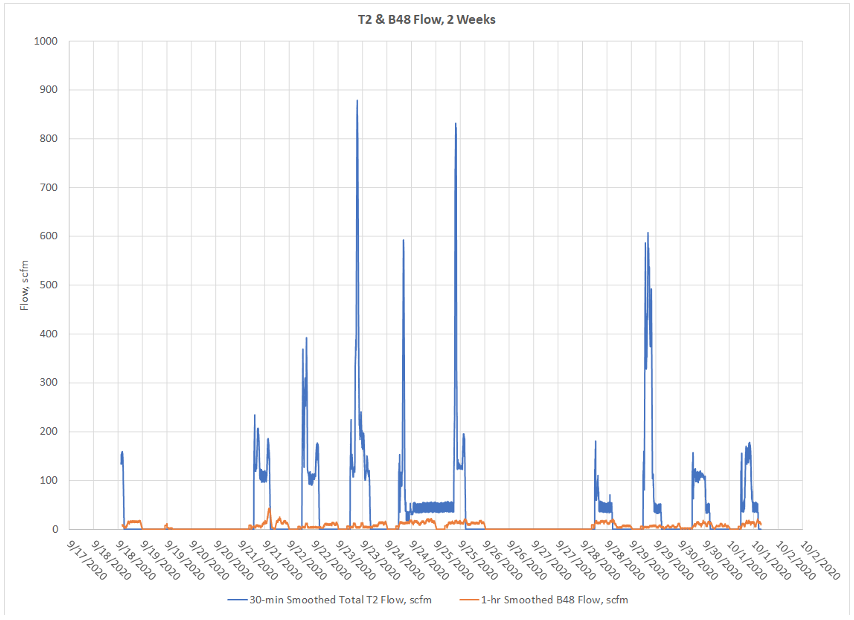 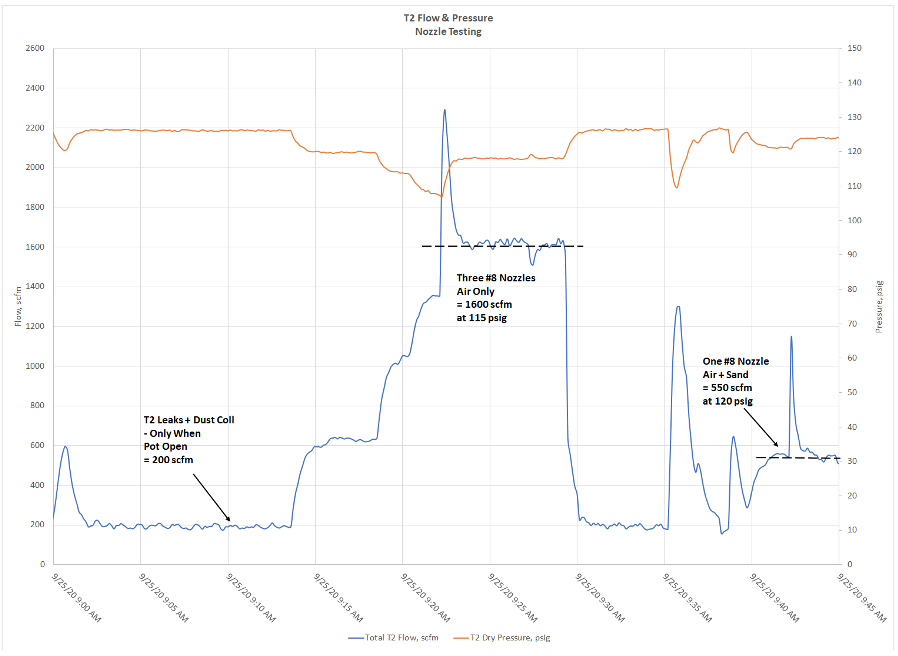 Somehow, the large compressor has to be shut off somehow during non-peak periods.  This seems simple, but it is not. Operators would not be allowed to randomly start and stop a large system like this.  It has to serve other needs, and operations usually does not have the authority to start and stop compressors anyway. The system has to be automatic and reliable.

A conventional control system with adding compressors as demand increases and removing them as it decreases would not work well with these sized compressors, even if T2 and B48 were integrated. The small compressor could be put in position 1, but then the large compressor would end up being “bumped” often for small peaks, and starting and stopping too often. What it needed is an “on-demand” automation system that accomplishes the following functions:

This is a custom control system.  To the best of our knowledge, no compressed air OEM or automation company offers a standard sandblasting on-demand control like this. However, this could be a system design that could adapt to many different configurations of sandblasting systems. That is why we think this article is necessary.

The specific elements of this project that would accomplish the above functions are as follows (see Figure 5): 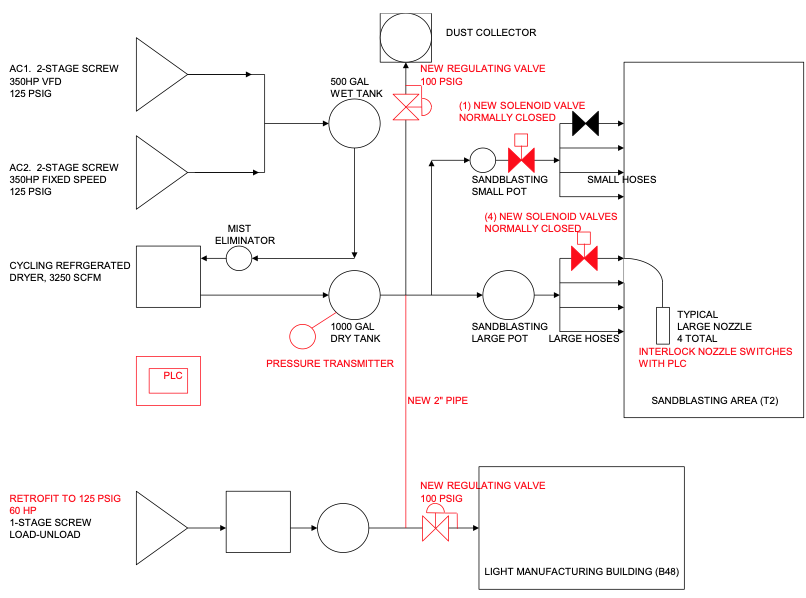 The improved system performance is as follows:

Savings are 85%! In this system, total energy cost was about \$9,200/yr. They only paid \$0.047/kWh (Washington, large industrial). But the above project which required no new compressors could save about 85% of the energy, \$7,800/yr, plus about \$5,000 in maintenance, \$12,820/yr total.  The project cost could be as high as \$75,000, doing it all right.  With incentives, the payback was reduced to about 3 years. But remember that this system already had a VFD compressor, and only operates 2,500 hours per year. For other systems that are not VFD-driven now, that operate longer, and have higher energy costs, the payback could be lower than 2 years even without an incentive.

An “on-demand” system that switches between two different modes is needed to optimize high peak sandblasting systems. By operating a small compressor with low no-load power during non-peak times and the optimal large compressors only when sandblasting is occurring, significant savings can be had. If a large VFD compressor is currently being used, this system will save lots of energy and reduce running hours, lowering maintenance and operating the compressor in its more reliable range.