A food processor was having compressed air problems, so they invited a compressed air auditor into their plant for an assessment and to help them size future permanent air compressors. The plant was experiencing low air pressure and detecting water in the compressed air lines despite having a desiccant air dryer. The auditor thoroughly analyzed the compressed air system production equipment and did end-use assessment and leakage detection. This article discusses the findings leading to a potential cost savings of 52% of the current level. 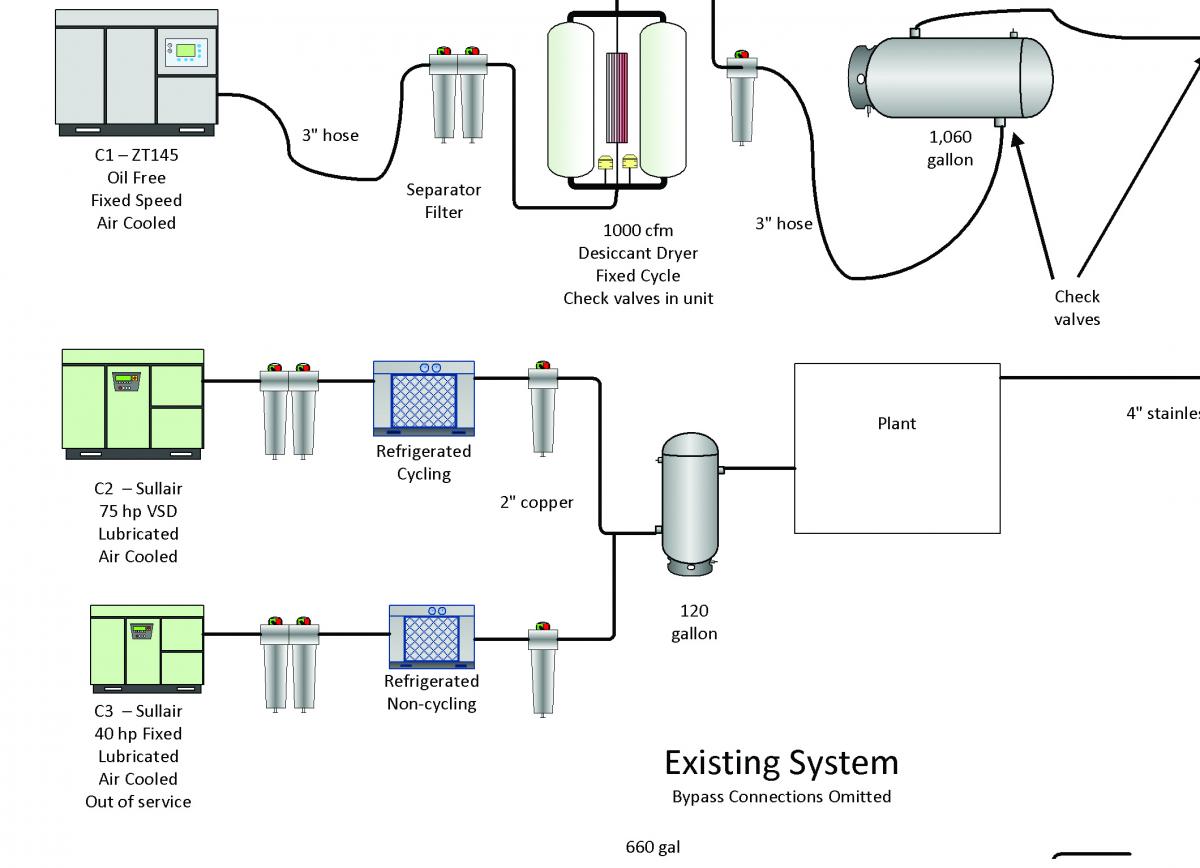 Figure 1: The site had a mixture of oil-free and lubricated air compressors with different dryer types.  As a result, the air quality was not meeting with corporate standards for food-quality compressed air.

The compressed air production and conditioning equipment consisted of one large rented 145 kW lubricant-free air compressor and two smaller permanent lubricant-injected air compressors (75 and 40 horsepower, respectively) that were originally part of the plant before an expansion took place (Figure 1).

Plant personnel were concerned the compressed air piping was being overloaded by excessive flow and were thinking this was the cause of the pressure issues. To check the pressure gradients the auditor placed pressure data loggers at the air compressor discharge, after the air dryer, and in a central location in the plant where low pressure was being experienced. Power loggers were also placed on the two running air compressors to track the performance of the equipment and to determine system loading at the times of pressure excursions.

The air compressor power was measured over a period of about a month, annual system operation is estimated at 8,760 hours, during which the existing system consumes a projected 1,707,300 kWh of annual electricity. The total electrical costs for the system are estimated at about \$119,700 per year, including taxes. Rental costs are estimated at \$208,000 per year with \$10,000 per year in estimated maintenance costs.

Compressed air production is an average of 800 cfm minus 190 cfm in air dryer purge (610 cfm), with peaks to 1,190 cfm (1,000 without dryer purge). The specific power of the system calculates to 32 kW per 100 cfm of air used when dryer purge is considered. Typical optimized systems of this type would have a specific power in the 21 to 23 kW/100 cfm range. This shows there is good potential for savings if the air compressor control strategy is improved.

Peak plant demands were consuming 1,190 cfm, more than the capacity of the two active air compressors, but this was occurring only 2% of the time. The occasional  deficit allowed pressures to fall lower than 100 psi, which reportedly caused production machine shutdowns affecting productivity. The plant also has inadequate air compressor back-up capacity, the failure of any one air compressor will cause difficulties meeting even production demands. The 75 and 40 hp  units are of oil flooded screw type, with refrigerated drying, but this is not in keeping with the corporate air quality standards for food product plants.

Figure 3: Energy costs were calculated based on the power utility rates. The plant consumed about \$120,000 per year to produce an average of 800 cfm of compressed air, not including dryer purge. The system specific power of 32 kW/100 cfm is in the higher range for similar systems and shows there are efficiency problems with the production of compressed air.

A test was done where the dryer purge was turned off temporarily as shown in Figure 4. The chart shows when the purge was removed the air compressor started cycling normally, and the power consumption dropped considerably, this shows that if something can be done about the air dryer purge and rapid cycling there could be significant energy savings.

The test also showed that the air dryer purge was 190 cfm, this is based on the change in compressor cycle time in the two conditions, the purge was found to be 40 cfm higher than the rated purge. The dryer was also set on a six-minute cycle (three minutes per side) rather than the normal 10-minute cycle. These extra unnecessary cycles wasted considerable compressed air due to the extra air required to pressurize the dryer vessels each time, only to depressurize them when the cycle ended three minutes later.

A condensate separator had been installed on the air dryer before the inlet filter. This separator had airless condensate drains installed, however, someone had slightly cracked open the manual drain. Interviews suggested this was done because moisture was regularly forming inside the plant pipework, and it was thought that the extra drainage would prevent this problem.  After further investigation, however, it was found that a condensate drain on the 75 hp lubricated-air compressor wet receiver had failed closed, allowing the tank to almost completely fill with water. Free water was inadvertently being injected into the plant from this receiver whenever the 75 hp air compressor had to run at high flows. 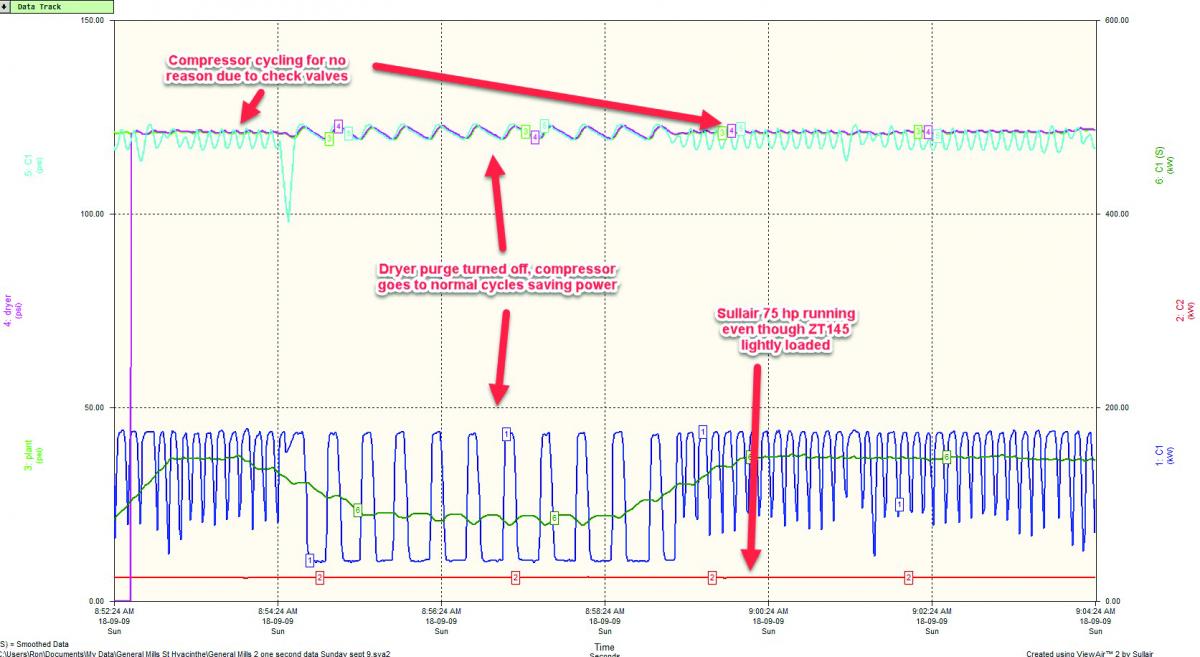 Some local low-pressure shutdowns on critical machines were occasionally occurring which affect production. Overall, the main cause of low pressure in the plant is the air compressor capacity problem, but local issues were also found due to poor local connection practices.

One in particular was mentioned by personnel. Data logging of the input pressure to this machine showed no significant local piping losses between the main line and the pipe drop. However, significant pressure loss likely exists between the piping drop and the actual end use. It can be seen that the FRL component chain of this machine is fed with only flexible plastic tubing, which is not a best practice when it comes to preventing pressure loss during peak flows within the machine. Careful analysis of the capacity of the tubing, filter, regulator, and lubricator needs to be done and compared to the peak demands of the machine to ensure these restrictions are not causing excessive pressure loss.

Compressed air leakage represents a constantly growing load on the air compressors as the plant ages, as well as a continuous energy cost. Leak detection using an ultrasonic gun was done in the plant to assess the situation with 32 significant leaks (or uncontrolled end uses) identified. This flow was estimated at 116 cfm.

Flow meters were later installed on the system and showed that the total plant demand during non-production hours was about 300 cfm, representing about 53% of the average plant flow. Obviously not all leakage had been found by the ultrasound test. Some of this flow was due to uncontrolled blowing devices, like compressed air powered vacuum generators left on, and some uncontrolled cleaning flow using flat nozzles left to run during non-production time.

Some recommended solutions at this site were:

This article shows yet another example of the energy savings and cost reductions that can be found by auditing a compressed air system. Not only energy savings are possible, but also improvement in air quality and reduction in production machine downtime. The audit identified the source of the pressure and water contamination problems the plant was experiencing, but the cause was surprisingly not what the company was initially expecting.