Compressed air audits are valuable exercises on significant energy users in a plant. Often done on main compressed air systems, these studies are also valuable on secondary systems, like dedicated low pressure circuits that feed production machinery. An audit of such a system turned up some surprising results on a process that was initially thought to be very efficient.

A common accessory to flexible packaging printing machines is an electrically powered nozzle system utilizing heated low pressure (30 psi) compressed air. The hot pressurized air is precisely directed through a compact arrangement of nozzles at a web of just printed material which causes the ink to dry quickly. This operation not only speeds up the printer throughput, but requires substantially less supply and exhaust air volumes over standard natural gas fan powered drying systems. Reported energy savings for this type of drying system is in the order of 25 to 50% over the gas type. These dryers require a supply of clean and dry 30 psi air from an external source. One such source is low pressure lubricant free screw compressors.

On request by the customer, as part of basic customer service, the local power utility, Manitoba Hydro, undertook an analysis of one of these drying systems which was installed at a large Winnipeg based plastics product manufacturer. The dryer was supplied compressed air from a dedicated 150 HP air-cooled lubricant-free single-stage screw compressor capable of producing 1050 cfm of continuous 2.5 bar (38 psi) compressed air.

Initial spot check readings were taken on the air compressor which was operating in load/unload mode. The hour meters on the local control showed the compressor had been running 51,500 hours , yet showed the unit was loaded only 9,400 hours of the total. In all, the compressor duty cycle calculated to only 18% over the life of the unit. Power measurements showed the compressor consumed 128kW fully loaded and 84 kW unloaded. A check of the manufacturer’s specifications for this unit showed something was wrong, the loaded kW reading was higher than normal and the unloaded kW was much higher than the expected 20 to 30% of full load.

Hour meter readings and kW measurements can be very important indicators of compressed air system efficiency issues. In this case, it would appear that internal compressor problems and a mismatch in compressor capacity may be greatly reducing the overall efficiency of the system. Fully loaded this compressor could produce a flow of 38 psi compressed air at a specific power of 11.2 kW per 100 cfm. The unit was actually consuming power at a rate of 34.5 kW per 100 cfm, even higher than an efficient compressed air system would run at 125 psi. The initial readings showed that about 75% of the compressor’s total power was consumed when the unit was unloaded and producing no air.

Data loggers were placed on the system and a load profile was developed (Chart 1).  During the data logging the compressor was repaired which immediately reduced the power consumption in both the loaded and unloaded condition to the manufacturer’s rated power levels of 118 kW loaded and 51 kW unloaded.  This also eliminated periods of low pressure that were being experienced.  It was interesting to note that these low pressures did not affect production activities. 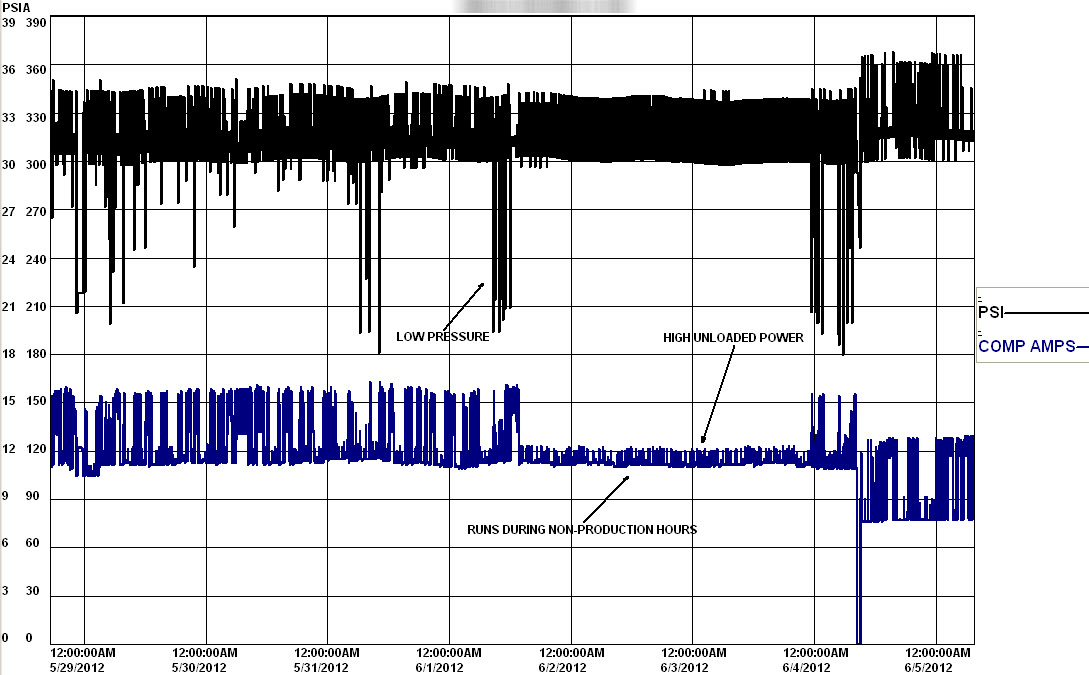 The data logging showed that while the drying system was operating 22 percent of the time the compressor was only loaded 12 percent of the time.  Further to this, the compressor ran unloaded the remaining 78% of the time, including during non-production hours on the weekend.  These wasted unloaded operating hours not only consumed significant energy, but also accumulated machine maintenance hours, which caused unnecessary expensive maintenance and repair costs.

The low compressor duty cycle during actual production, the compressor was only loaded 54% of the time (12/22 hours), showed that the compressor is too large for the current production capacity, in fact the unit had been purchased for two presses, but only one was actually implemented.

A number of proposed energy measures were developed that, if implemented, could save additional electrical energy and displace natural gas used for building heating:

The potential savings by addressing these measures are estimated at 61% of the existing compressor operation or 610,000 kWh.  Further to this a reduction of dryer heater power of 22% is expected saving about 7,000 addition kWh per year.  Heat recovery potential is estimated at 9,700 cubic meters of natural gas.

This study illustrates the value of assessing compressed air systems of every kind for potential savings opportunities.  In this case the customer was unaware of the energy this system was wasting and the internal compressor problems that were causing increased power consumption. 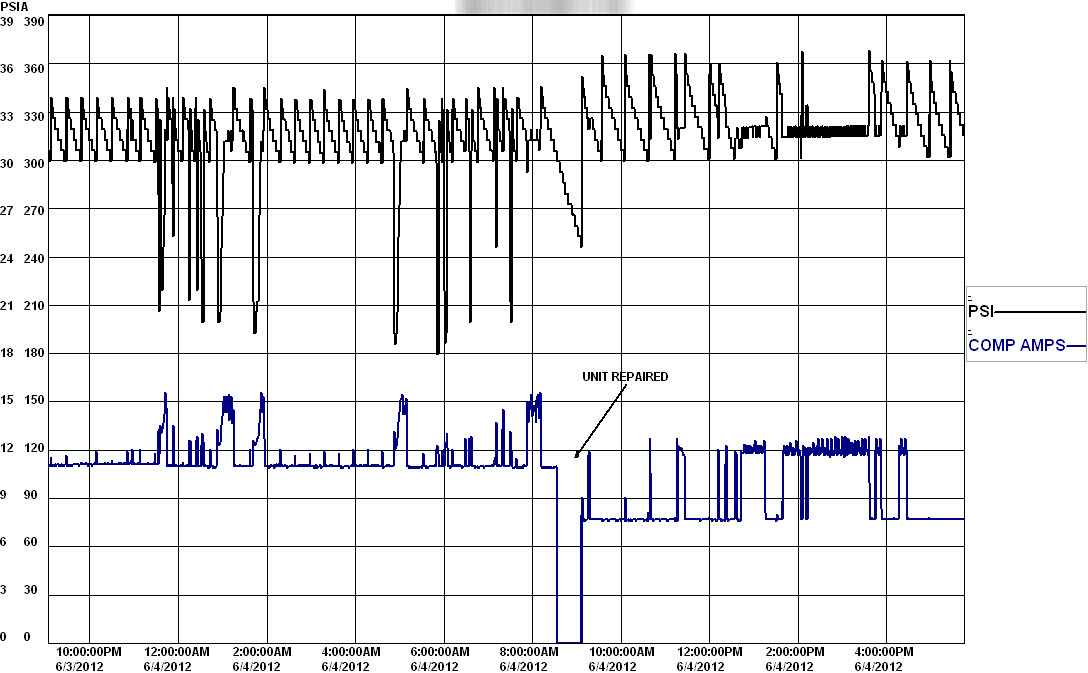