When Three Air Compressors Are Better Than One (or Two) 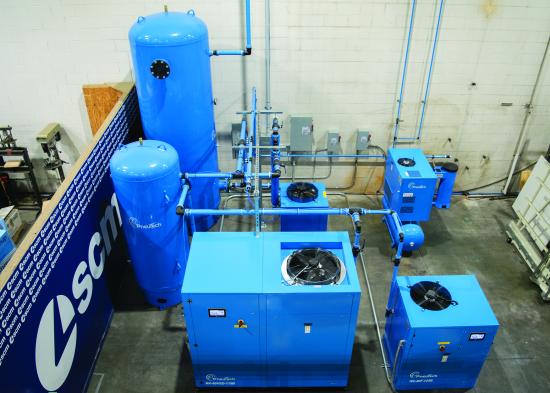 What’s the best way to meet peak CFM demand events that only happen once or twice a year? That was the challenge for SCM Group North America, an industrial woodworking equipment provider headquartered in Duluth, Georgia. A three-compressor system manufactured by PneuTech made sure they could meet the demand during air-intensive “Dealer Weeks” while keeping energy costs and service requirements low the rest of the year.

SCM Group distributes high-end woodworking equipment through a nationwide network of dealers, ranging from timber systems and large CNC machines for industrial manufacturers to band saws, sanders and joiners for hobbyists and small shops. Each January, dealer representatives from across the eastern U.S. gather at their showroom outside Atlanta to see all the latest and greatest equipment in action.

During Dealer Week, they needed enough compressed air to power multiple machines at a time all day long. Keeping simultaneous demos running for all their top machines required airflow of up to 400 cubic feet per minute (CFM). However, outside of Dealer Week, their compressed air demands were quite modest. On a typical day, they only needed 20 CFM to power their dust collection system and pneumatic tools for their dock and warehouse crating areas.

Previously, they had one 40 HP fixed-speed compressor to service both the showroom and the warehouse and dock areas. The compressor was too large for their daily needs but not large enough to handle all of the equipment they wanted to demo at once during Dealer Week. In addition, a failure during Dealer Week had once left them scrambling for a mobile rental backup. That’s when Adam McCracken, the Logistics and Warehouse Manager for SCM Group in Atlanta, contacted WSI Machinery, a PneuTech equipment dealer in Illinois.

McCracken knew that he wanted a two (or more) compressor solution so he would always have a backup in-house. “I always try to plan ahead,” he says. “I hope for the best and plan for the worst.” Having multiple compressors would ensure that they would have enough air to keep basic operations and at least a few demos running even if one compressor was down.

Two Compressors or Three? How a Multiple-Compressor Solution Reduced Costs

SCM was initially considering two 40 HP fixed-speed rotary screw compressors, each capable of delivering about 190 CFM. The compressors would be linked with a master control system to equalize compressor use. A single compressor would run on days when they needed less air, and the two would work together when demand was high. This would have worked—but was it the best option?

After talking to WSI and PneuTech about their needs, SCM settled on a more unusual solution: three compressors of varying sizes. An energy analysis showed that the three-compressor system would save energy and reduce costs over the complete lifecycle.

The system proposed by WSI and PneuTech included three different sizes of rotary screw air compressors in addition to a refrigerated air dryer and wet and dry air tanks.

Together, the three compressors can deliver up to 455 CFM at 115 PSI. A valve system allows the compressors to be run individually or in any combination to support both warehouse and showroom activities; they can easily turn on any two compressors together or even all three for events with especially high demand. The compressors are WiFi and Bluetooth® capable and can be controlled using a secure, proprietary app via a smartphone or tablet. 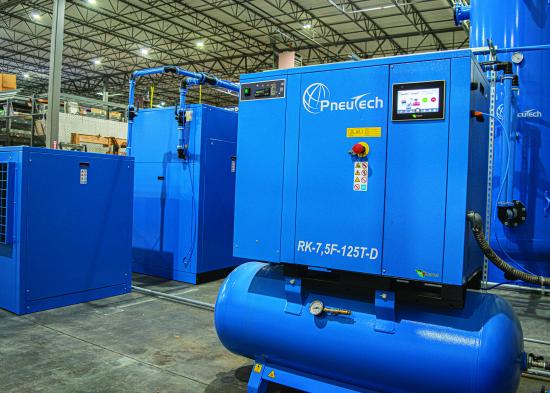 The 7.5 HP fixed-speed compressor, with integrated dryer and 72-gallon tank, supplies air for daily needs, including the warehouse, dock and dust collection system.

The system does not require a complex master controller to operate the units in tandem. It is set to automatically add capacity if the compressor is not keeping up with demand.

This system ensures that pressure does not drop below the 95 PSI required for most of their machines, even during their highest demand events. This allows SCM to run multiple demos simultaneously during Dealer Week and support high-demand applications such as their hot air fusion machines. McCracken says, “It gives us a lot of peace of mind. We don’t have to worry about a situation where we’re in the middle of a demo and start running out of air. The system recognizes if one compressor isn’t keeping up and will automatically turn on another compressor to maintain the pressure we need.”

Two large storage tanks (400 gallons wet storage and 1060 gallons dry storage) are used for the showroom to provide ready air for high-demand events and increase the efficiency of the air dryer. On days when they are setting up or testing new equipment or running small individual demo sessions in the showroom, they can quickly fill the tanks using the 60 HP VSD compressor and then turn the large compressor off and use the 7.5 HP to meet their ongoing CFM requirements. 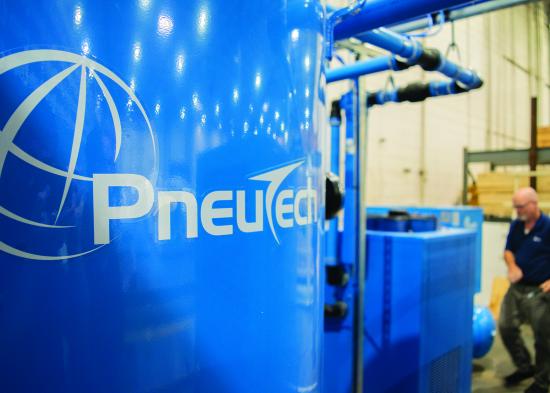 Wet and dry storage tanks provide ready air for high-demand events and increase the efficiency of the air dryer.

SCM also installed a new distribution piping system. They chose aluminum compressed air piping from Unipipe. The modular system does not require special tools or a licensed plumber for installation and is rated for up to 232 PSI. 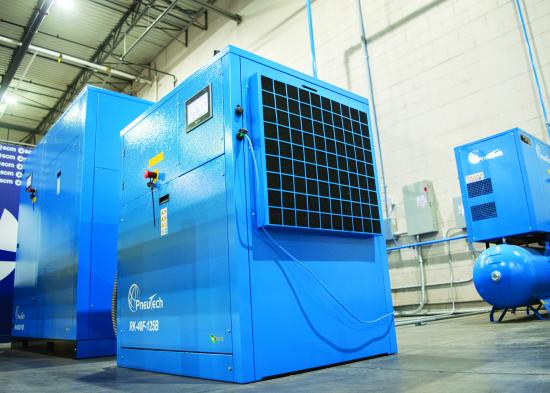 * numbers in this chart are generalized to not be brand specific 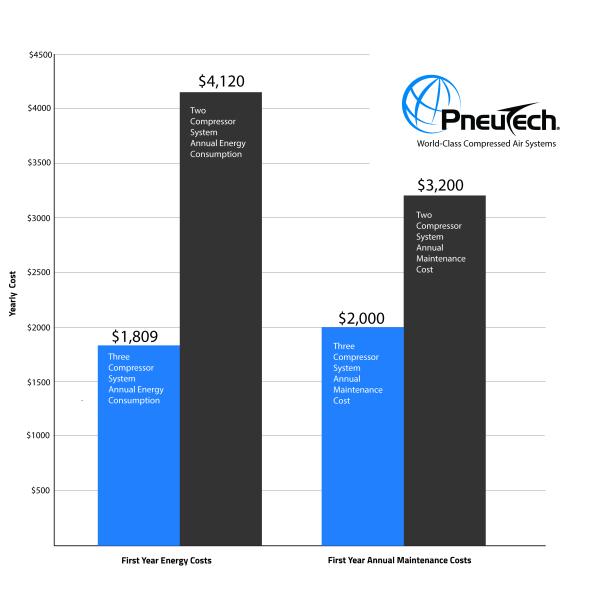 The Bottom Line: A Flexible System that Reduces Operating Costs

In addition to energy savings, the three-compressor system offers other benefits for SCM, as well.

The system was installed in March of 2022 and has performed well since installation. The three-compressor system works for SCM because of the high variability in their demand. While it might not be right for every application, it gives SCM the flexibility they need to optimize performance for both daily operations and annual high-demand events.

McCracken says, “This is the best thing we could ever have done. This is a solution that satisfies all of our needs. And WSI and PneuTech were there every step of the way to answer all of our questions.”

Derrick Taylor has more than 20 years of experience in the compressed air industry as the co-owner of Fluid-Aire Dynamics and current General Manager of PneuTech. PneuTech distributes high-quality industrial air compressors and compressed air accessories. For more information visit https://pneutech.com/usa/about/.

Visit our Webinar Archives to listen to expert presentations on Compressed Air Fundamentals at https://www.airbestpractices.com/webinars.