As an industrial distributor for 65 years, C.H. Reed, Inc. has been providing ideas, concepts and sustainable solutions to help manage issues associated with three key areas of industrial plants: compressed air systems and equipment; assembly tools and ergonomic material handling; paint finishing and fluid handling equipment. Compressed air has always been a strong focus for C.H. Reed, and it’s a common thread running through all of its product families.

C.H. Reed, Inc. was founded in 1948 by Charles and Elizabeth Reed as a small auto parts aftermarket supplier. The company later added spray equipment, power tools and small air compressors to its lineup. In the mid-1960s, C.H. Reed transitioned to an industrial and heavy commercial end-user customer base, leveraging prior expertise to offer industrial-grade products combined with system design and repair services.

Each of its product families has specially trained field application engineers and service technicians. “Management believes that sales must be accompanied by a well-trained service group. We can service all products sold as well as most competitor’s equipment,” Reed adds.

Since 1948, the company has grown to include more than 100 employees in five locations servicing thousands of customers in the mid-Atlantic region. Full air compressor sales and service branch facilities are located in Milton, Erie and Pittsburgh, PA. C.H. Reed is still family-owned with many third and fourth generation people active in the business. The following case studies reflect the company’s total solutions approach to compressed air applications.

Installing a high-performing air compressor was a key to the application. C.H. Reed, the local FS-Elliott distributor for Pennsylvania, was contacted by Penn State to size and quote a centrifugal compressor to drive the aircraft turbines being tested.

FS-Elliott performed numerous flow and pressure studies and provided performance curves for the two-stage machine at various off-design conditions. After a year of design and testing, the Polaris P700 air compressor (1,500 hp, 11,000 cfm) unit met performance requirements. The unit was ordered and installed in late 2012. The air compressor was commissioned by Kris Wertman, C.H. Reed’s senior project manager. Penn State has since ordered an identical compressor to double the design air flow required for Phase Two testing. This second compressor will be installed in November 2014.

“FS-Elliott provided performance curves for the two-stage machine at various off-design conditions,” says Barringer. “The team at FS-Elliott also was a valuable resource to our graduate students as they furthered their research using the data collected during the test stand setups.”

In addition to the compressor installation, C.H. Reed provided a HydroThrift closed-loop cooling system (2.705M Btu), test piping that was custom fabricated by Penn American, Muncy, PA, fast-acting (12 and 16 inch) valves to protect the compressor and test turbine, and a process gas chiller supplied by nano-purification solutions, Huntersville, NC. Nano was willing to commit to the design process and provide a chiller that met customer specifications, holding the air temperature to +/- 2°F.

The HydroThrift cooling system removes heat generated by the compressor. “The compressor is so large that direct air cooling is not possible,” says Bruce Williams, regional sales manager. “The cooling system transfers the heat to the coolant, which is pumped through the fluid cooler outside of the building. This is an efficient, cost-effective method of removing heat.”

The Nano system provides chilled water to the compressed air heat exchanger. “The system provides various air flows and temperatures for the testing facility,” says Nick Herrig, business development manager. “The requirements were to dial in flows of 2,500 scfm at 100 psi maximum down to 100 scfm at temperatures ranging from 250°F down to 41°F.” 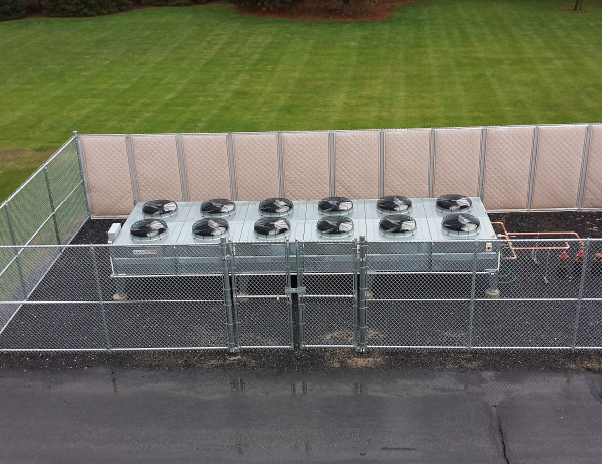 C.H. Reed supported Penn State throughout the project and continues to do so during Phase Two. Wertman worked with Barringer and Karen Thole, Penn State head of mechanical and nuclear engineering, from design through installation and commissioning to bring the compressed air solution into operation.

The START project is a multi-year endeavor, which encompasses design and construction from 2011 to 2013, and testing and research from 2014 to 2017. “We’re happy with the work completed thus far and the initial data that is being acquired is encouraging. We’ve been working closely with Wertman at C.H. Reed during the project, and he has helped us tremendously,” Barringer says.

Earlier this year, C.H. Reed partnered with a local container manufacturer that needed to replace a number of old, unreliable reciprocating compressors along with older inefficient rotary screw compressors. The plant needed to reduce maintenance and energy costs associated with its compressed air system. In addition, production demands had to be met while improvements were being made.

To simplify the installation process, Parker Transair aluminum piping was used to replace the steel and copper air lines within the compressor room. Two Quincy condensate/oil separators were installed to reduce the amount of contaminants in the wastewater stream, thus allowing for safe, environmentally friendly, inexpensive disposal. The QSI 200-hp and 300-hp units feature Quincy’s Power$ync variable-capacity control technology, which allows the compressors to function at less than full capacity while maintaining energy efficiency.

“The Power$ync control allows the two units to communicate with each other in real time while one operates as a base load compressor and the other as a trim compressor at the same target pressure for maximum efficiency without the need for a central controller,” explains Dennis Reed. “This arrangement allows the compressor system to match the plant air requirements with minimal power at an annual energy savings of \$100,000 compared to the previous system.” 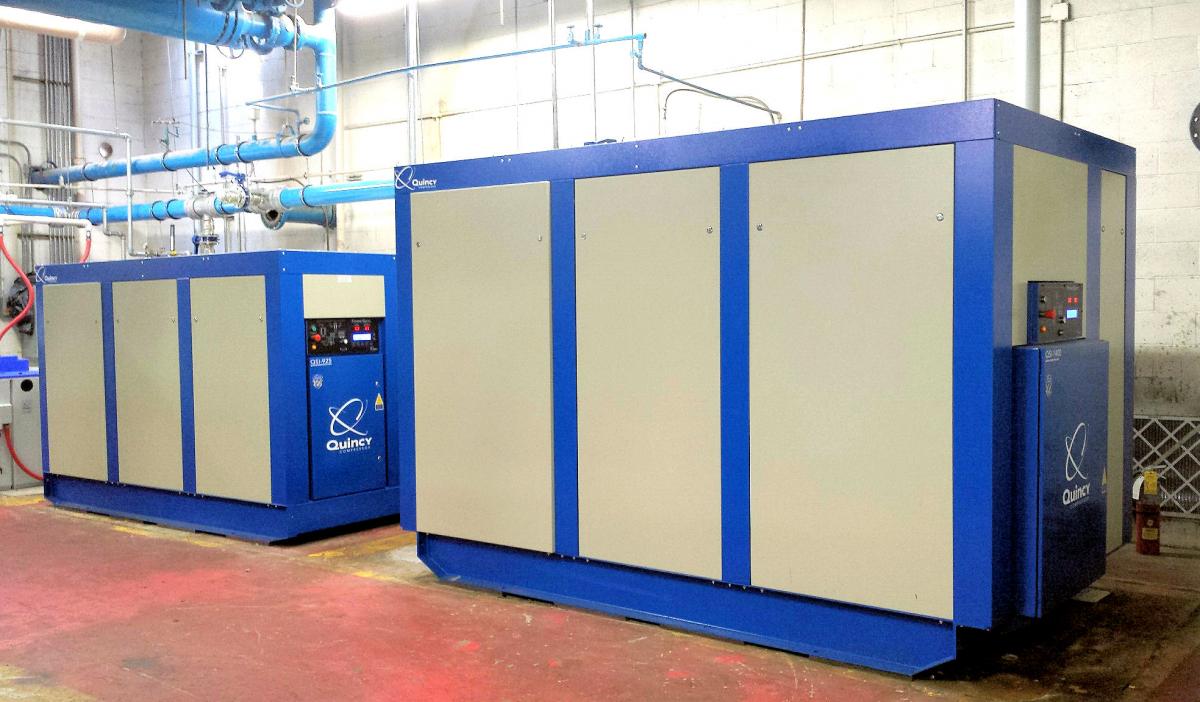 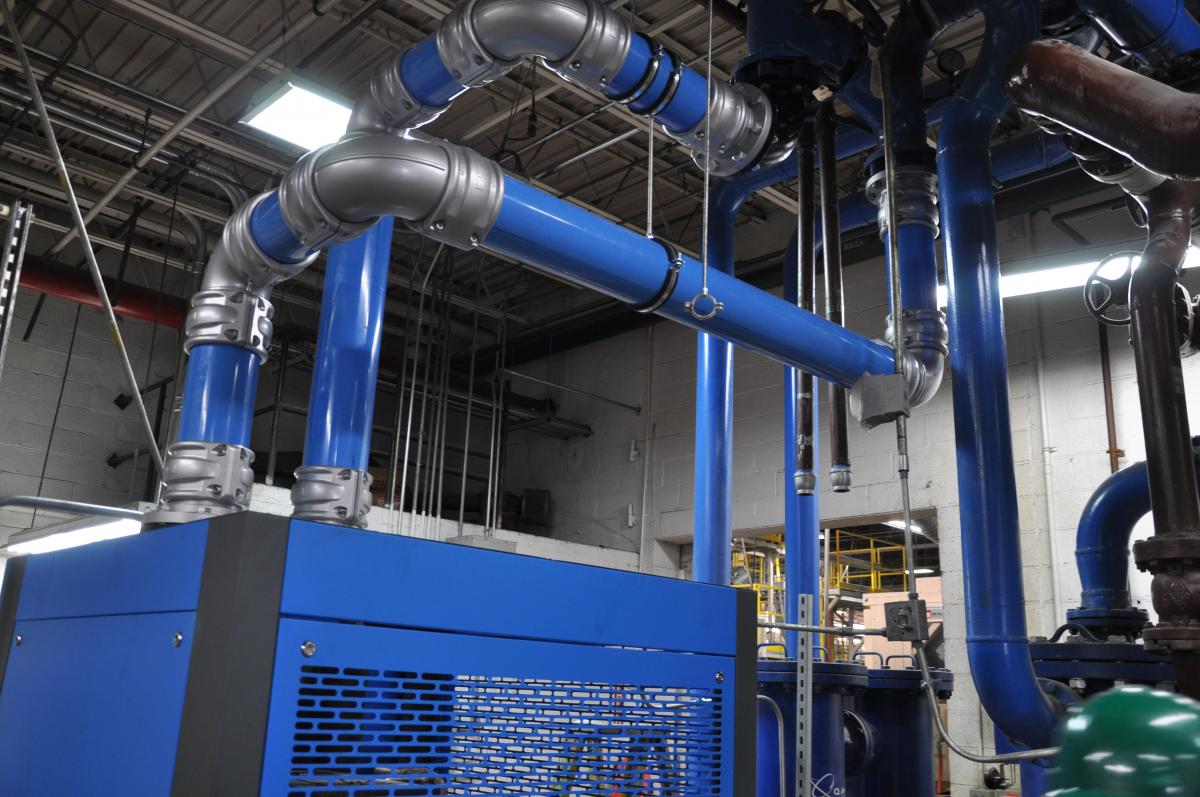 A local manufacturer was experiencing air supply issues with production equipment. C.H. Reed initiated data logging to determine the operating profile of the existing compressed air system. Three compressors supplied the entire production area and other points of use throughout the facility from a central compressor room. A fourth machine was used for backup.

A total of 1,150 hp was available via two centrifugal compressors: FS-Elliott 150DA (350 hp each) and two rotary screw units. A 5,000-scfm, dual-mode, refrigerated air dryer was located in the central compressor room. An average of 653 brake horsepower (bhp) was needed to run the compressed air system during normal production levels, providing an average of 2,692 cfm.

C.H. Reed performed data logging of the load/unload cycle during non-production hours in order to determine the extent of significant compressed air leaks in the system. The total leak load was estimated at 1,159 scfm, approximately 40% of the total normal production capacity of 2,962 cfm.

Data logging confirmed that the leak load was created by compressed air flow to machinery not in use. “Under normal operations, 8 of 17 production units were always idling,” Reed explains. “Shutting off air to this idling equipment would save an estimated 545 cfm and \$49,486 in annual electrical costs. Jorc Air Saver G2 automatic shutoff valves were installed on all pieces of equipment so that compressed air was not consumed by machinery when not in use.”

The Air Saver valves, provided by Jorc Industrial LLC, New Castle, DE, were not used in the typical manner (i.e. to open and close the valves at set times). There was no set schedule as to when production would be using any one piece of equipment, so it was not possible to use the timers in the normal fashion.

“With the help of the engineers at Jorc Industrial, we were able to provide a solution. We tied an open and close signal from a set of dry contacts on each piece of equipment to the controller on the valve to signal when to open and close,” Reed explains. “These pieces of equipment also had a hydraulic system that needed one minute to come up to pressure, so the cycle time on the valve was not an issue. The entire project cost to the customer was \$15,000 for an ROI of less than four months.”

This is another example of how C.H. Reed goes the extra mile to provide total solutions to its customers – serving as a single-source provider of equipment while offering technical support throughout every project.

Author Bio: Neal Lorenzi is a freelance writer based in Mundelein, IL. He has covered a wide range of industries during his 25 years as a writer and editor.