Many food processing plants are already using – or are being driven to use – oil-free compressed air at a low-pressure dewpoint. This has required the use of two-stage oil-free screw air compressors, centrifugal air compressors and other technologies, as well as regenerative dryers of one type or another.

The most common oil-free air compressor in industry is the two-stage “dry screw” machine and the most common regenerative dryer type is the heatless type. These are combined in many food processing, pharmaceutical, and high-tech plants. But they weren’t actually designed to be a “pair” and there is a “fatal attraction” that brings them together in ways that can defeat reliability and efficiency, unless systems issues are addressed.

This article discusses “systems issues” that improve reliability and reduce costs. I define systems issues as how the pieces are controlled and fit together, not their fundamental design as components. Also provided are pointers about optimizing your system with piping and/or controls modifications, not new air compressors and dryers.

Plants can increase reliability by reducing the number of air compressors running – creating standby. In some cases, system optimization can create drying redundancy. They can also realize costs savings by reducing energy consumption and maintenance costs, primarily of the air compressors.

Certainly, the oil free screw/heatless dryer combination might be criticized for being an overkill in some plants, because you can often filter lubricated screw air compressors to a level needed by most food processing processes. In addition, a -40 oF pressure dewpoint might be lower than needed for many processes. And there certainly are oil-free air compressor/dryer combinations designed by the OEM to work together very seamlessly. However, this article won’t go into the controversies associated with the competing technologies that can serve food processing. There are valid arguments to use different types of air compressors and dryers based on the specifics of the plant. But oil-free screw air compressors and heatless dryers are common enough, and the components easy enough to understand, that it makes for a good discussion about system issues.

At the inlet of the air compressor stage, this cylinder is open to the intake, and its volume is filled. At “cut-off,” the rotation of the female rotor away from the center moves the cylinder so that it no longer is open to the intake plenum, isolating that volume of air. From that point on, rotor rotation causes the male lobe to compress that cylinder, until it is open to the discharge plenum. The length of the cylinder is about 1/3 now, and the pressure is about 3 X what it was at the inlet. See Figures 1 and 2. 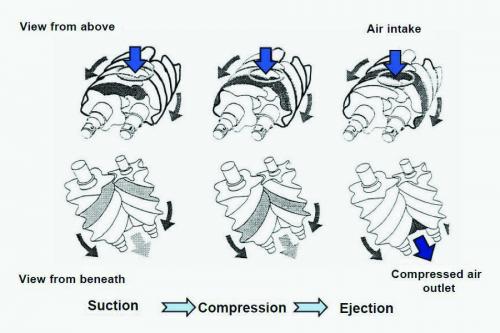 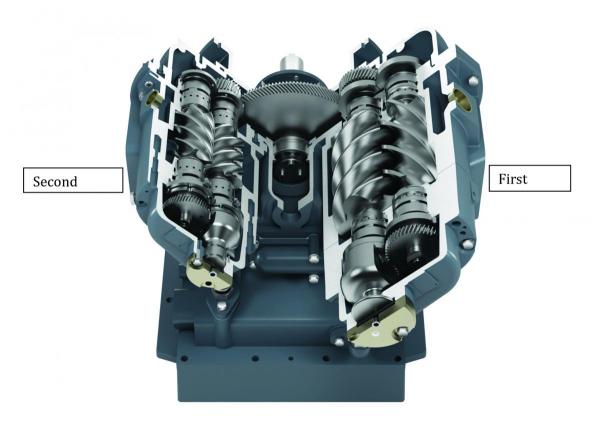 Rotors don’t touch in an oil-free screw air compressor. They are kept at a very close distance via timing gears, and coated with a factory-designed temperature and wear tolerant coating to seal the rotor gap as best as possible. Some leakage back between the rotors occurs, reducing capacity and increasing temperature as it wears but that’s another technical subject all on its own.

Capacity control is done typically via load-unload. Variable speed is becoming more accepted, but most air compressors installed are load-unload, so we will assume that mode for this discussion. Oil-free screw air compressors can’t be “inlet modulated” because first-stage temperatures would go too high. To unload, the capacity control valve (CCV) is fully closed, and the discharge is vented. To load, the reverse occurs. Oil-free air compressors are capable of loading and unloading far quicker than lubricated type unit, because there is no oil sump to blow down. However, there are maintenance issues associated with cycling. The CCV needs to be rebuilt more often if the air compressor cycles more frequently.

Multiple oil-free screw air compressors are not hard to control with a PLC. The simplest method is “cascade control.” Typical settings are shown in Figure 3. 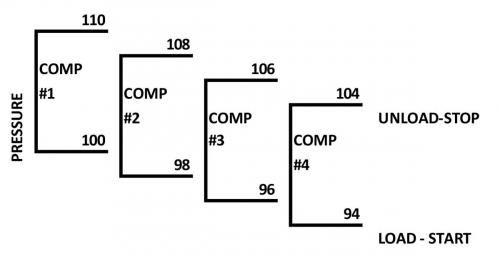 Figure 3. Shown is an example of typical cascade pressure settings.

Smart sequencers can use a variety of other algorithms, but cascade is the most common and easiest to understand. Keep in mind that all air compressors local controls operate from their own discharge pressure sensor so any pressure variances at that point are interpreted as a demand for air.

Regenerative dryers are completely different than refrigerated dryers. Refrigerated-type dryers drop moisture by merely cooling the air as much as possible, and condensing the water vapor. It takes a small amount of energy to “pump” the heat from the compressed air out, about 5% of the energy that it took to compress the air. A vapor-compression refrigeration cycle draws the heat out of the air.

Regenerative dryers don’t use a thermodynamic cycle like refrigerated dryers. They use a process called “adsorption,” which is a molecular process of a gas adhesion to a solid. In a crude sense, it’s like a magnetic process. A water vapor molecule is attracted to the surface of the tiny beads of desiccant like a particle of iron to a magnet, at normal temperature and pressure. And it is rejected like a reverse-polarity magnet at a lower pressure (or higher temperature). 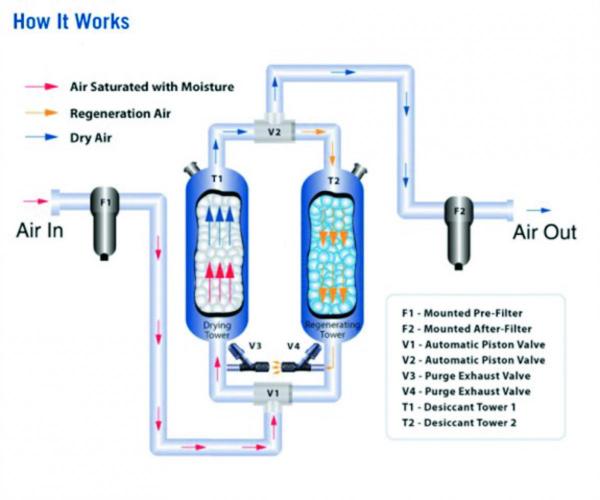 To regenerate the off-line tower, the pressure has to be dropped and a motive fluid added to carry away the moist air, and with it all the moisture that has been loaded up in the last cycle. In a heatless regenerative compressed air dryer, that fluid is a portion of the dried air. About 15% of the dried air is needed to regenerate a -40 oF dryer, and about 25% for a -100 oF dryer. This is called “purge.” Purge air had to be compressed, and is costly. Not just in terms of the energy, but the reserve air compressor capacity that it robs from the plant.

Controls consist of a timer and valves that switch back and forth, and control de-pressurization, re-pressurization, and other necessary functions. Typical heatless dryers have a 5-minute cycle time per tower.

Additional controls called “dewpoint demand” (or something similar) use a dewpoint transmitter after the dryer to determine if the dryer can extend drying on a tower, and not start to regenerate. It is NOT a variable purge flow, however, but a variable time that it is purging. It certainly saves a lot of energy on lightly loaded dryers. However, keep in mind that the peak purge is still the same. This comes into play in the “fatal attraction” discussion also.

Now for the fun part where things are not nice and tidy! Like in a typical plant, such as your own. Let’s talk about air compressor controls, and what happens when your system is a set of individual air compressors, each with their own dryer. You might have had the plant built originally with one and a backup. The plant has grown, and you have another air compressor room that has one or more, all isolated to their own dryer. I realize this isn’t an ideal arrangement, but it makes this next section easier to explain. 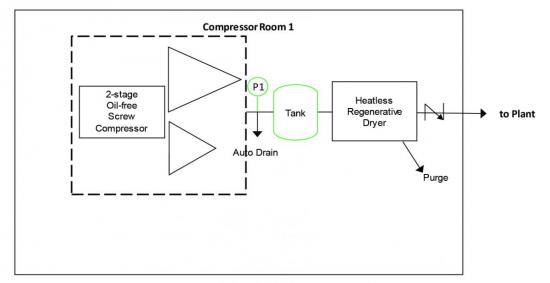 The latter two are isolated from the system by the check valve, and will cause draw-downs in pressure far faster than a system drop (if the air compressor is unloaded or off). The purge and auto drains are coming off a smaller, “mini-system” storage size, smaller than storage that buffers the demands out in the plant. And the purge and drains are “sudden,” or “binary” demands, on, then off. The dryer purge can be a big one, even if reduced in frequency by the dew-point demand controls, sometimes as much as 1/3 of the air compressor size if the dryer is oversized.

So, what demand will “talk” to the air compressor faster, creating a pressure signal to start/load, the dryer, the auto drain, or the system? It turns out it’s in that order most of the time, dryer purge, then drain, then system.

The net result is that the air compressor in Figure 5 will cycle to meet false demands. If the plant had two air compressor rooms like this, and one was in “lag,” it could be starting/stopping, loading and unloading purely based on a false demand. In a future article, I will describe a case study of a real system that ran and cycled a 300 HP air compressor merely due to dryer purge.

Heatless dryers and oil-free screw air compressors, though they are reliable and provide great performance in many situations, can have a fatal attraction if one air compressor is isolated to one heatless dryer. The problem is compounded when the dryer is larger than the air compressor. The dryer will become a false demand for that air compressor, cause it to load and load rapidly, just to meet purge. My next article will discuss some system changes that can reduce that effect, and maybe help them get along better.