In many US furniture and other wood product plants, CNC router tables are commonly used to achieve an optimal combination of productivity and customization. They rely on vacuum to hold work pieces in place as shapes are cut out by the router. This is vital for precision and consistent product quality. 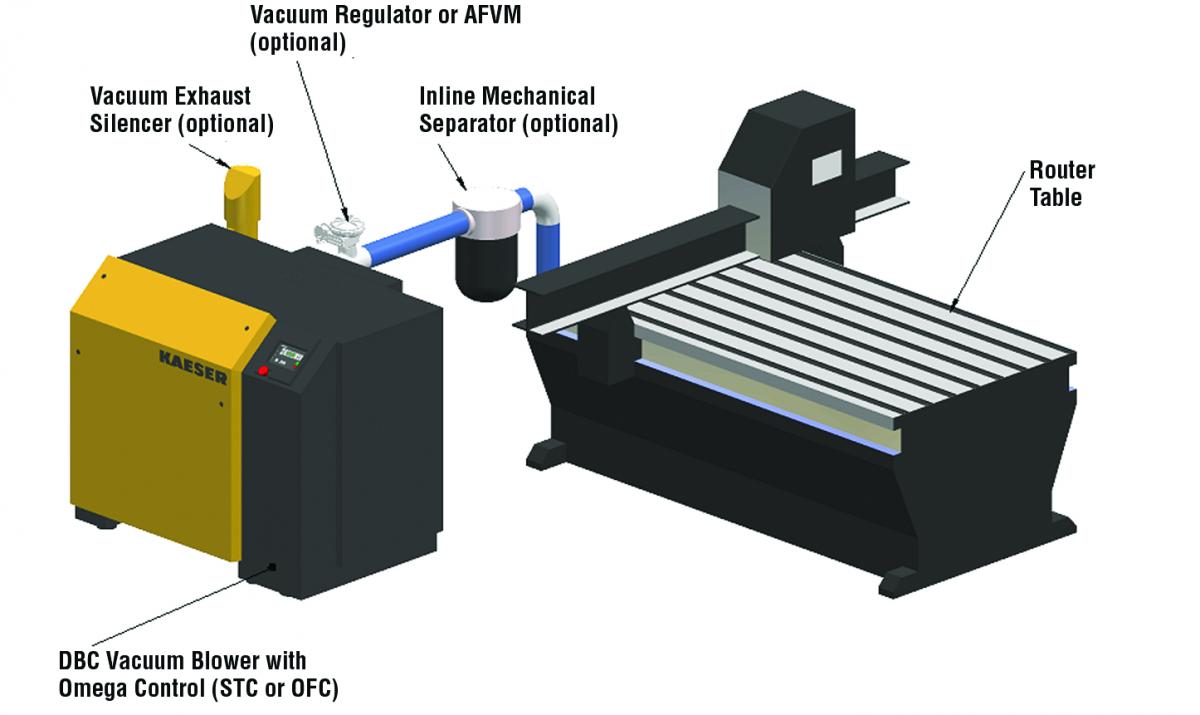 The CNC machine OEMs and dealers often sell vacuum units with the router tables. There are many types, including liquid ring, piston pumps, rotary vane, lubricated rotary screw, dry screw and various types of blowers. Blowers are less often sold with original equipment because they are generally limited in the depth of vacuum they can reach. Positive displacement blowers, for example, don’t usually go beyond 15”Hg, and regenerative blowers even less. It is commonly believed that vacuum levels of 25-29”Hq are needed to properly hold down work pieces.

Another reason blowers are less commonly sold as part of the OEM package is that not all blower makers and sellers offer complete packages. Blowers require additional components (e.g. motors, drives, inlet/out silencers, and controls) and engineering to integrate them. Rotary screws, vanes and liquid ring pumps are commonly sold as complete packages with no need for further engineering. Further, many blowers are louder than these other devices, making them less desirable.

The US furniture manufacturer in this case purchased their first router in the early 2000s, and they now operate a total of four router tables. With each table, they purchased 40 hp rotary screw vacuum pumps selected to provide approximately 27” Hg vacuum. Over the course of several years, their processes seemed to require increasing amounts of vacuum. At this time, Kaeser suggested blowers as an alternative, but they were believed inadequate due to their vacuum level limitations. The conventional wisdom was that vacuum level was more important than flow. So based on outside recommendations and observations from another plant, they added two 100hp vacuum screws and took one 40hp unit offline. By the end of 2007, they operated 5 machines (from two different manufacturers) totaling 320 hp.

But they continued to have difficulties. Once significant portions of the plywood sheets were cut away, the sheets themselves would begin to move because of the force of the cutting head on the sheet goods – creating downtime, inaccurate cuts and excessive scrap material. A set of four hydraulic roller bars were even put in place at each table to help keep the sheets in place, but the problems continued. Further, these sets required substantial annual maintenance.

In addition, the plant’s ambient conditions were tough on the vacuum screw units. Though the units were fitted with special inlet filtration, the heavy load of wood dust and leather fibers on the inlet filters caused them to fail and collapse. After review of the system, it was determined that undersized interconnecting piping on some of the vacuum units was a root cause. Changing the piping from 4” to 6” slowed the air velocity down enough so the inline filters could do their job of stopping sawdust from making its way into the airend.

Several of the vacuum screw airends had to be replaced due to contamination. Maintenance and repair on these units (air filters, oil filters, air/oil separators, and replacement airends) added up to tens of thousands of dollars in maintenance cost per year. After five years of trying to make it work with vacuum screws, the manufacturer was ready for a change. Sales representatives from Kaeser Compressors made the case that in fact it is air flow that provides stability in these applications – not deeper vacuum. This was a tough sell with the plant manager. So Kaeser suggested they try using a blower on one table.

The common wisdom is to go with deeper vacuum with the idea that greater force is being applied to hold the wood in place on the table. This is true at each small hole in the table, but the total hold down force is a function of pressure/vacuum and area. There are many, many vacuum holes on each table, and effective vacuum can often be achieved using less vacuum with higher flow rates. While it is true that the vacuum is the force which holds the work piece in place, more and more flow is required as the material is cut away and more holes in the table are exposed. Once the flow requirement of the process is greater than the capacity of the vacuum pump, the vacuum degrades and the work pieces slip. Contrary to the belief that it is the depth of vacuum providing hold down on routers, the solution to the problem is a vacuum pump designed to produce more flow.

In the Spring of 2011, the manufacturer installed one 30 hp Kaeser Omega DB 236 blower package as a test to supply vacuum for one router table. This unit was furnished with external STC option for reduced current starting and controls. This model put out 642cfm. Vacuum level ranges from 11 to 9”Hg depending on the phase of routing. It replaced a 40hp screw machine producing 555 cfm at 24”Hg. The complete blower package required approximately half the floor space of the unit it replaced. After nearly a year of reliable performance, they purchased three additional DB 236 C blower packages for the other three tables. This time, the plant opted to purchase fully-integrated models with the starter and controls built in. This made the installation faster and the total footprint reduction was even greater when the 100hp screw units were removed.

Blowers can generate much greater flows with smaller motors (and electricity). The high flows compensate for the shallower vacuum levels. In addition to the energy savings, they are simpler devices and cost less to maintain.

By installing a lower horsepower blower, there were significant energy savings. Prior to the blower installations, the manufacturer was using over 320 hp, and is now using only 120 hp. Calculations based on approximately 5,000 operating hours per year reduce their power costs from just over \$119,000 to less than \$45,000 --savings of \$74,000 annually.

The rotary lobe blower packages also require less routine maintenance and are less sensitive to the ambient conditions. The plant manager estimates the maintenance savings at almost \$25,000 per year. Further, the hydraulic rollers were no longer needed, which reduced maintenance costs even further.

The simple ROI on this project was 10 months.