HOFFMAN BLOWERS: BORN IN THE USA

The Hoffman U.S. Machinery Division was established in 1905 outside of East Syracuse, New York. The initial product was an exhauster for the dry cleaning industry — pulling a steam vacuum across the garments. The Company grew and soon after began discovering industrial applications for their technologies. After the war period, during which Hoffman manufactured ball bearings and operated it’s own foundry, the company began discovering new industrial markets for it’s products. A signiﬁcant part of their business was in the wastewater treatment industry. Hoffman’s veteran Sales Manager for the America’s Jim Ward said, “In the 1950’s, the wastewater treatment market became a signiﬁcant portion of our business and has remained that way ever since.”

For aerobic digestion, Hoffman multi•stage centrifugal blowers became an industry standard. This air is generally 1,500–30,000 scfm, with pressure typically between 6–12 psig, with a maximum of 16 psig. With mainstay models like the 741 Centrifugal Blower, Hoffman has been the premium brand that others measure themselves against for many years. Mr. Ward commented, “Our multistage, cast iron, centrifugal blowers have set the quality and reliability standard for over 100 years.”

The company went on to introduce a complete line of multistage blowers and has built a nationwide network of expert sales and service technicians. Tony Maupin, a Territory Sales Manager for Hoffman said, “All wastewater applications are unique. The application knowledge and experience of Hoffman representatives is unparalleled.”

By 2009, Korean-manufactured, high-speed turbo blowers using air-foil bearings, had begun to win some market share. Now a division of Quincy, Illinois based Gardner Denver Inc., Hoffman managers knew they had to respond. “High-speed blower imports, using air-foil bearings, could in certain applications, provide energy-savings of interest to the customer,” said Wes Carl, Hoffman’s Director of Centrifugal Technology. “We didn’t feel, however, that the air-foil bearing technology provided customers with the same level of reliability and robustness that we expect from Hoffman products.”
Air-foil bearings have surface wear during a routine start-up and prior to reaching normal operating speed. A “lift-off” speed is achieved at around 4-7,000 rpm as a wedge is formed between the bearing and shaft. Dave Shanahan, the Applications Engineering Manager commented, “The reliability issue with air foil bearings relates to the fact that aeration blowers are a start/ stop application. Every time the unit is started or the bearing “touches down” on shutdown, wear is taking place and that is going to limit the life of the bearing. Also, the basic plant environment has a practical level of contamination (dirt, dust) build-up that can impact this wear and the air foil bearing life. 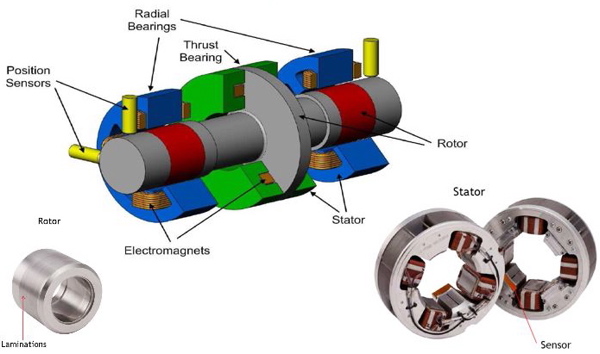 In early 2010, Gardner Denver CEO and President, Barry L. Pennypacker, was adamant that the company not lose market share to the imported high-speed blowers. Brian Cunkelman, Gardner Denver Vice President for the Industrial Products Group commented, “Our challenge was to launch a new product that would be more energy-efﬁcient than the imports — while maintaining the integrity of the quality and reliability of the Hoffman brand.” Engineering resources were pooled from corporate Gardner Denver labs in Quincy, Illinois and from the Hoffman headquarters in Peachtree City, Georgia. Cunkelman continued, “We are very proud that the combined engineering teams responded with vigor to the challenge and were able to design, test and introduce the Hoffman Revolution during the 4th Quarter of 2010 AND exceed all the market requirements!”

HOFFMAN REVOLUTION: DESIGNED, ENGINEERED, AND MANUFACTURED IN THE U.S.

The engineering project team (split between Quincy, Illinois and Peachtree City, Georgia) began with a solid VOC (Voice-of-the-Customer) exercise. Tony Maupin talked about the typical customer requirements. “Wastewater plants are often built for future population growth so we will see extra blowers on site for future growth. If peak demand is 9,000 cfm, it’s common to have four 3,000 cfm blowers installed with three running and one on stand-by.” Then came the critical statement, “Load requirements are always changing. In tourist towns, demand goes through the roof in the summer.” Another important factor is ambient temperature. Cooler air means you deliver more oxygen within a given volume of air. In July a wastewater plant may need to run two blowers when they only one run blower in January. Maupin concluded, “The market is asking for increased energy efﬁciency at partial loads while retaining multi-stage blower reliability standards.” 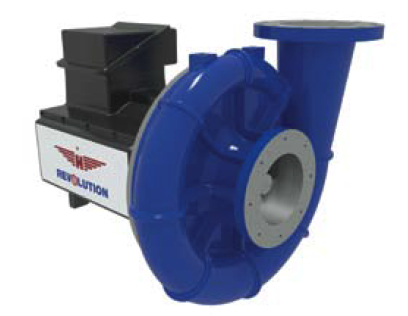 In April 2010, a break-through was achieved by the engineering team. Mr. Carl commented, “We discovered a U.S.- designed and manufactured magnetic bearing coupled with a high speed motor that was successful in the HVAC industry. With our design engineering, we felt we could turn this into the blower product the market was looking for.” At this stage, a group of ten design engineers, mechanical engineers, electrical engineers, test engineers, packaging experts, controls experts, and cooling circuit experts was assembled. “We gave everyone assignments and we were off to the races,” said Mr. Carl. “We did a lot of front-end analysis and concept simulation on this machine to optimize the design and reduce the time to market” including:

The purpose of this analysis is to verify that we didn’t have any rotor natural frequencies (vibrations and resonance) from zero to maximum speed including adequate separation margin to ensure proper operation fo the blower.

Ultimately, the engineering team had excellent convergence between the predicted (calculated) performance vs. the actual measured performance of the prototype.

In between April and September 2010, the product was designed, built, and tested. Mr. Norb Mast, the Research & Development Manager at Gardner Denver, commented, “In Quincy, Illinois we were able to use our Performance Testing Lab and our Sound Testing Room to help with this project.” Mr. Mast provided us with the following description of the testing labs and processes:

• The Performance and Heat Testing Room: This room has received an investment of approximately \$1 million from Gardner Denver. It is equipped with special power and switch gear coming from transformer banks. There is also a data acquisition system with data loggers. The piping is a mixture between carbon steel and stainless steel — it’s all 12 inch piping with ASME ﬂow nozzles. The nozzles are used for outlet air ﬂow measurement. Instrumentation in the lab includes RTD’s for temperature measurements, electronic pressure transducers, turbine ﬂow meters for coolant ﬂow measurement, and a Yokogawa power analyzer for the incoming power measurements. In order to accurately measure the incoming power on variable frequency drives, you need a more expensive power measurement device like the Yokogawa.

- Performance Tests: Power is measured according to the ASME PTC10 Power Test Code. We measure power into the package and measure airﬂow leaving the package. The computerized system logs ﬂows, temperatures, pressures, and power. Flow nozzles were used to log the ﬂow delivery. All discharge air was channeled into a nozzle run. The nozzle is a differential pressure device. These tests are all designed in accordance to the ASME power test code defining the shape of the nozzle and the equations to be used.
- Heat Tests: The entire room is heated up and has temperature sensors all over the blower package. We measure VFD temperatures, blower discharge temperature, cooling circuit temperatures on the closed-loop glycol based circuit as coolant goes through the motor. These tests have ensured that if the Revolution is run in a hot ambient temperature, nothing will affect the machine.

• The Sound Testing Laboratory: This room has received an additional investment of approximately \$1 million from Gardner Denver. This is a semi-anechoic room. We converted one of the buildings into this laboratory — which has to be large enough to contain even our largest skid-mounted packages. We built walls and a new HVAC system able to maintain ambient temperatures very quietly. It has a concrete ﬂoor and all the special acoustical absorption foam wedges located on the ceiling and walls.

– Sound Tests: We follow ISO Standard 2151 to perform our sound testing. We set up microphones on top and all around the unit. The ISO Standard provides the procedure to calculate sound power and sound pressure from the blower. 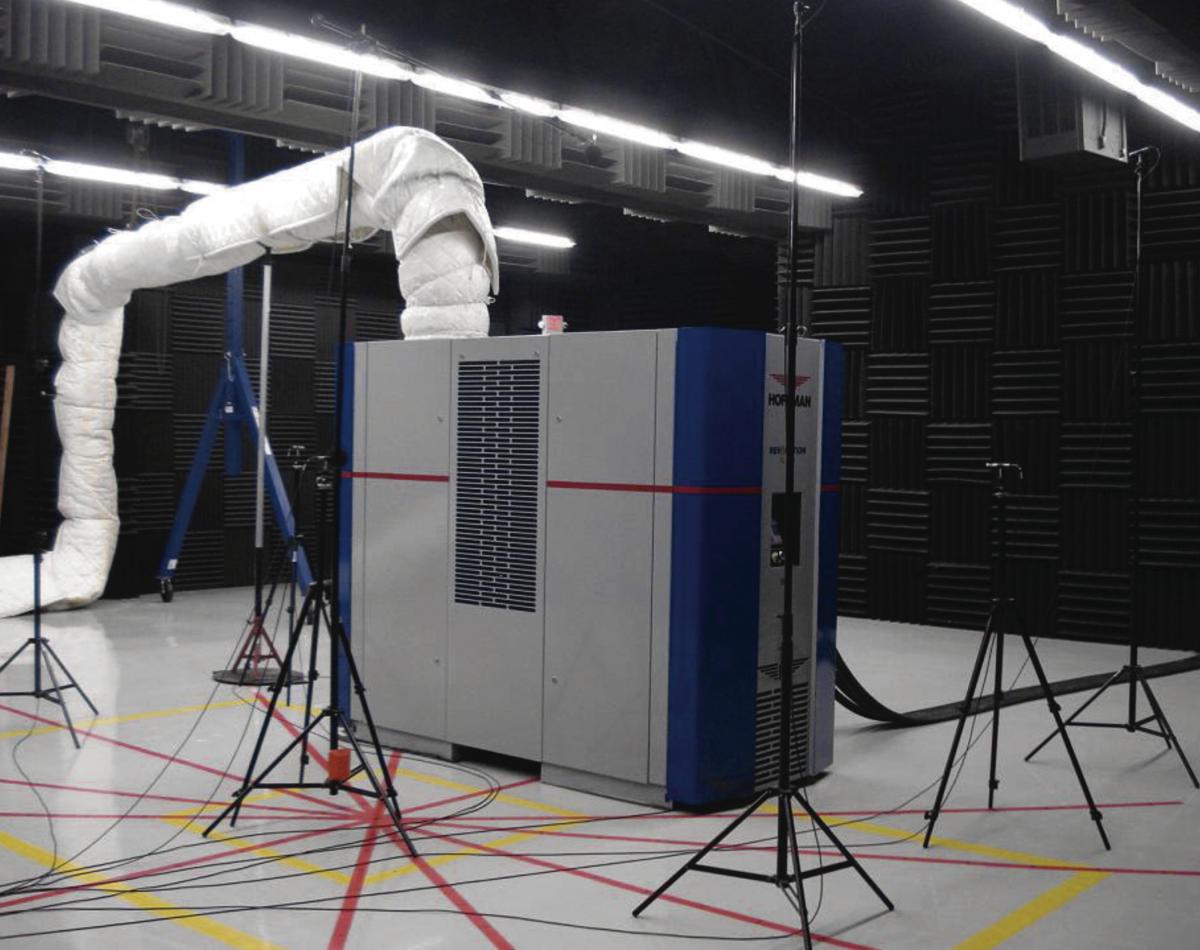 The Hoffman Revolution at The Sound Testing Laboratory

A FOCUS ON ENERGY EFFICIENCY

Blowers pull ambient air and send it to the wastewater tanks or lagoons. “The motors that drive the blowers tend to represent 50—75% of the total energy used at a wastewater plant,” according to Patrick James, the Hoffman Marketing Manager. An important focus was to be able to run at partial loads using a variable frequency drive (VFD). The overall energy utilized by the equipment is a function of the individual efﬁciencies of the components (blower, motor, VFD, etc) that make up the package. The Revolution product utilizes a high efficiency permanent magnet (PM) motor and selecting the correct VFD technology was critical. A Current Source Inverter VFD is utilized which was determined as the best ﬁt with the PM motor and provided the optimal package efﬁciency and reliability.

There are many situations where an older wastewater treatment station is looking to replace a couple of blowers with newer machines. “Equipment upgrades are an ideal application for the Hoffman Revolution,” said Mr. James. Proper selection and utilization of the Revolution can produce annual energy savings of over 20% versus an existing traditional arrangement. Recognizing these savings is achieved through an understanding of the characteristics of the system demand and how to best apply the technology.

In working with the Hoffman sales personnel, these details can be reviewed and the best option for the speciﬁc plant can be provided.

The Hoffman Revolution represents another chapter in American resiliency and ingenuity. Faced with imports threatening to take market share, the company invested the resources required to provide a next-generation technology. A new technology emerged in record-setting time, capable of saving energy for the wastewater treatment market while maintaining the traditional reliability and quality standards of a Hoffman product.