A large chemical plant in Celje, Slovenia, planned to retrofit a kiln used to produce titanium dioxide. To make space for the new equipment related to the retrofit, the plant needed to relocate its high-pressure compressed air system feeding an adjacent pressing process used to dry the material before firing it in the kiln. However, a comprehensive compressed air audit using cloud-based software showed the plant did not need to relocate the system.

Based on the audit and careful planning, the plant opted to replace its high-pressure compressed air system with pneumatic boosters and reconfigured the delivery of air to its pressing process. In so doing it eliminated the need to invest more than \$200,000 for relocating the high-pressure system – and is now expected to save approximately \$45,000 per year in energy and maintenance costs. The project also delivers a payback of just over two years. 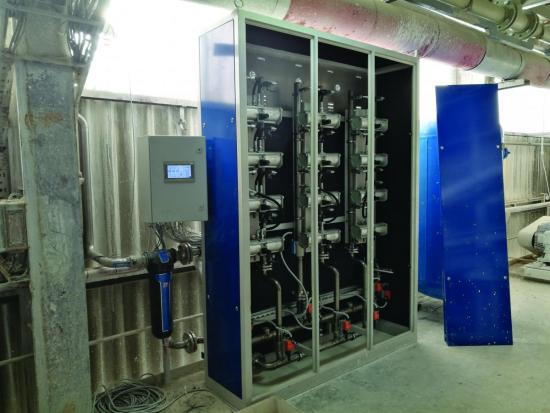 Based on the results of an audit using cloud-based software a large chemical plant replaced a high-pressure system with these pneumatic boosters, allowing it to avoid a costly relocation. The newly configured system is also expected to save the plant \$45,000 per year in energy and maintenance costs.

The original high-pressure compressed air system used for the titanium dioxide pressing and drying process consisted of three water-cooled, 125-horsepower, two-stage reciprocating air compressors delivering a total of 320 scfm of compressed air at 300 psi. The 33-year-old air compressors experienced high maintenance costs and were maintained by an authorized service contractor in France. Despite their age, the air compressors were key to powering the presses.

Operators at the plant closely monitored pressures used in the pressing stage of the process as it is one of the main parameters needed for the presses to function properly. The plant did not monitor the rest of its air usage, including purge times and release times.

The chemical plant needed to have the compressed air system audit performed during the COVID-19 pandemic. As such, the plant determined it was best to conduct the audit remotely as much as possible.

The plant commissioned CALMS Air Inc. to conduct the audit, which set out to quantify actual and future operating costs of compressed air and calculate potential operating savings of a new air compressor station. To conduct the audit, CALMS used its cloud-based assessment and monitoring system. The review consisted of site measurements using remote data acquisition equipment to monitor pressure, power, and flow both at the air compressor station and at the presses. Additionally, CALMS interviewed plant personnel.

Due to the nature of the process, where the raw material is pressed in small batches roughly once every 40 minutes, there was a lot of unloaded operation. This wasteful condition constituted more than half of all electricity consumed by the high-pressure air compressors. The audit also showed that only a small portion of compressed air is actually required at high pressure for the first stage of the process using bellows to eliminate excess water. Air pressure during the water drainage and pulp release stages did not need to exceed normal plant pressure, which meant the compressed air for these second and third stages could be supplied by the plant’s centralized compressed air system. 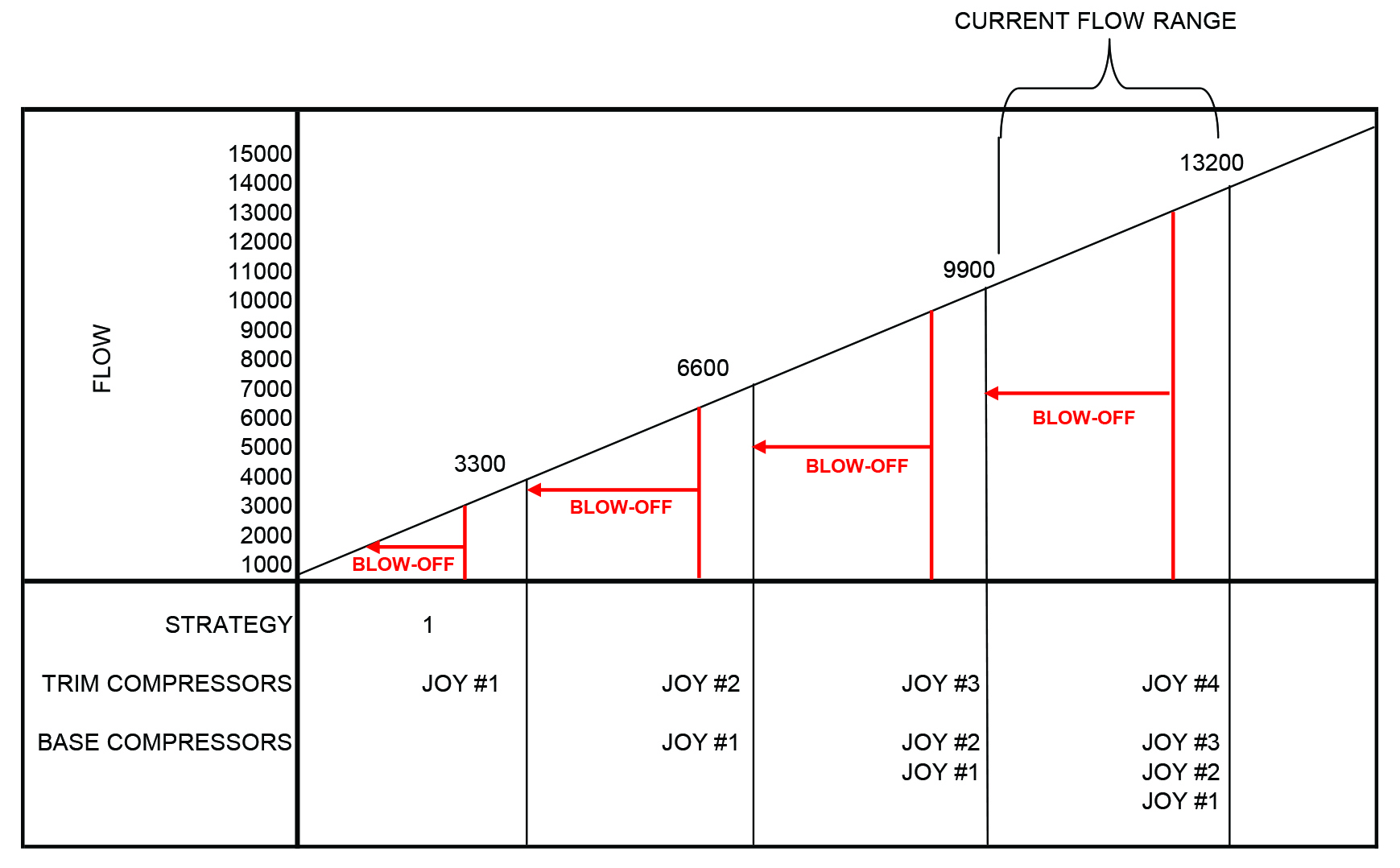 Shown is the load profile of the pressing process at the chemical plant. As shown, only the pressure sequence at 12:35 am requires high pressure air at 180 psi. Additionally, consumption of compressed air is low during this same period compared with the rest of the sequence. The short period of high pressure at 12:40 am during the purge sequence is caused by backpressure of stationary liquid. The rest of the sequence only requires compressed air at 100 psi. Click here to enlarge.

The centralized plant system consists of four centrifugal air compressors and one large Variable Speed Drive (VSD) oil-free rotary screw air compressor with the ability to deliver 15,000 scfm at 100 psi. The air is dried to a pressure dew point of 38°F (3.3oC). The system, which also features a 55,000-gallon dry receiver tank for stable pressure, has a specific power of 18 kW per 100 cfm.

Together with a local compressed air service provider, CALMS recommended the plant replace the high-pressure air compressors with pneumatic pressure boosters to supply air to the first stage of the pressing process and use plant air supplied by the centralized plant system for the remaining two stages of the pressing process.

The booster configuration consists of three rows of four boosters, each of which is capable of increasing the air pressure by a factor of two. Each row is activated separately and works as a single unit of four boosters running in parallel. Two rows of boosters supply air to the presses, while the third row serves as a backup unit. The active rows supplying air to the presses rotate each week so that no single row is idle for more than one week while it acts as a backup unit. A central controller controls and monitors the booster system. 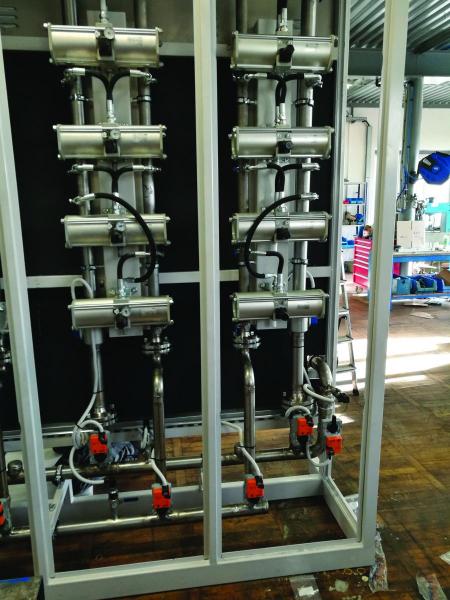 The booster configuration at the chemical plant consists of three rows of four boosters to supply high pressure air to presses used in the process of drying titanium oxide.

To supply compressed air to the boosters, the plant reconfigured its piping system by adding a new high-pressure pipeline and a ball valve to allow the centralized compressed air system to supply air from the main header pipe to the boosters. The boosters boost air from 100 psi to 180 psi and supply it to the first stage of the pressing process. Additionally, compressed air piping was re-routed to allow the centralized system to supply air to the presses at lower pressure for the purging and release stages of the process. The presses were also modified for optimal use of compressed air supplied via the newly configured system. 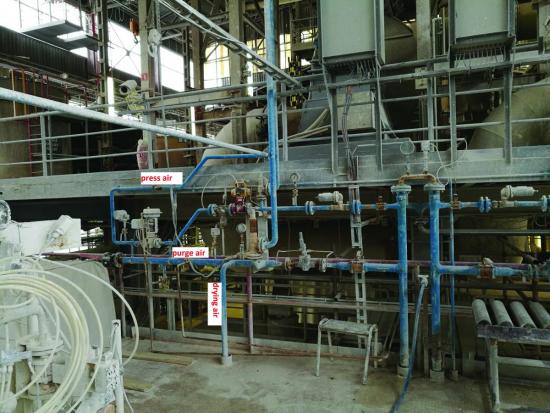 The boosters serve as an ideal solution since the small array of boosters did away with the need for a large air compressor station and the need to build a facility associated with it. In addition, the boosters are cooled by the expansion of plant air supplied to them, which means they actually cool themselves off while running. Ambient dust is also not an issue as the inlet air for the boosters is clean compressed air. Due to the harsh environment with significant heat and dust, an electrical system with ambient air intake would have been unreliable and expensive to maintain.

The plant uses the same cloud-based monitoring software that was used to conduct the audit to ensure the reliability and efficiency of the newly configured system. The software monitors both the energy efficiency of the booster package as a whole and the operating status of each booster. Anomalies are reported automatically to both plant personnel and the local compressed air service provider – and monthly reports are automatically generated. Any deviation from expected efficiencies is logged and available for review. Additionally, the system allows for maintenance to be carried out proactively to ensure reliability of the system remains high while keeping costs to a minimum.

Energy and Maintenance Savings and More

As detailed in the compressed air audit, the compressed air system upgrade is expected to save the chemical plant \$31,000 annually in electricity costs due to the lower specific power consumption of low-pressure compressed air from the plant's centralized compressor station. Additionally, it stands to save another \$14,000 in maintenance costs. A ROI of 2.2 years is expected. Although the cost was not formerly calculated, the plant also saved at least \$200,000 by not having to relocate the high-pressure air compressor station.

In the end, the plant installed a highly efficient compressed air system that uses less energy and is less expensive to maintain. Additionally, the new cloud-based monitoring software system continues to track energy and maintenance savings, which are expected to be delivered throughout the life of the solution.

With more than 15 years of experience Rok Trelc is as an independent specialist for compressed air systems with CALMS Air Inc. His main work consists of conducting tests and implementation support for CALMS’ international customers. Early in his career Trelc worked as a sales engineer in the field of flow and level measurement. He was also a project manager and a sales partner with Ingersoll Rand. Contact Rok at email: rok.trelc@hpe.si, tel: 386-41-339-328.