The National Institute of Standards and Technology (NIST), founded in 1901 is a measurement standards laboratory, and a non-regulatory agency of the United States Department of Commerce. Its mission is to promote U.S. innovation and industrial competitiveness by advancing measurement science, standards, and technology in ways that enhance economic security and improve our quality of life. NIST employs about 2,900 scientists, engineers, technicians, and support and administrative personnel.

Sparks Dynamics, a leading cloud based remote monitoring and data analytics technology company, entered into a Cooperative Research and Development Agreement (CRADA) with NIST researchers to develop industrial compressed air pattern analysis to enhance system efficiency and reliability.  The following is the CRADA objective from the statement of work:

“The objective of this project is to help the building automation industry develop novel products that more cost-effectively identify faults (unwanted conditions) and inefficiencies in the operation of the compressed air plants of industrial facilities.  More cost-effective fault detection and diagnostics (FDD) products can come to the building automation marketplace only after that industry makes very significant advances in the state-of-the-art of its FDD software tools from what it currently offers.  Those advances require making common practice of rules-based artificial intelligence (AI) methods that the building automation industry has shown little to no familiarity with in its technology so far.  This project will utilize, under controlled conditions, the compressed air plant of the NIST campus as a facility for test and development of an embedded rules-based FDD tool based upon NIST expertise.”

As part of the CRADA, Sparks Dynamics installed a ReMASTER remote monitoring and data analytics system to measure system KPIs in the compressed air plant, which supports the compressed air needs in the research labs as well as control air for the facility-wide HVAC system and control air for the operation of the boiler and chilled water plants. It is a critical utility to maintain the operational status of this federal laboratory.

The ReMaster system uses the Tridium (Honeywell) Niagara AX data acquisition system at the plant level where all sensor data is collected in a JACE (Java Application Control Engine) processor.  Initial Sensor data included compressed air mass flow (SCFM), pressure and temperature downstream of the drying / cleanup equipment and actual KW meters on each compressor.  A value of specific power is also calculated in the JACE by dividing total system kilowatts by total system CFM/100.  Data is collected every second by the JACE and then every 30 seconds three values for each data stream (average, max, and min) are pushed to Sparks Dynamics cloud servers.  For seven data streams that amounts to 42 points of data a minute or over 1.8 million data points a month. 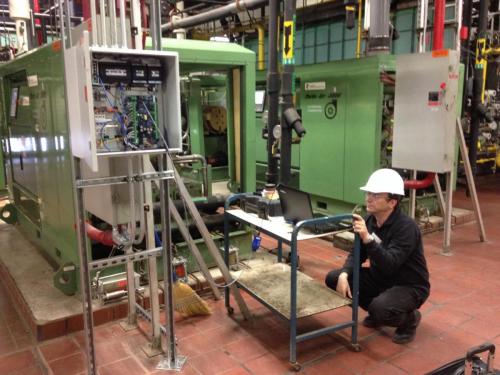 Commissioning of the ReMaster System at NIST

During the first 30 days of monitoring, Sparks Dynamics developed algorithms (system rules) with NIST researchers to detect system anomalies. At the Sparks Server an analyst can use the ViewMaster software application to perform an analysis of the existing system.  The NIST FDD analytics software is under continuous development utilizing Bayesian probability theory to be a "learning" tool that adaptively becomes better at what it does as it gains "experience"... that is, as it gains user feedback concerning its "classifications" (detection calls).

One of the available system views is a chart of all Key Performance Indicators (KPI) over a specified time selected by the user (Figure 1). 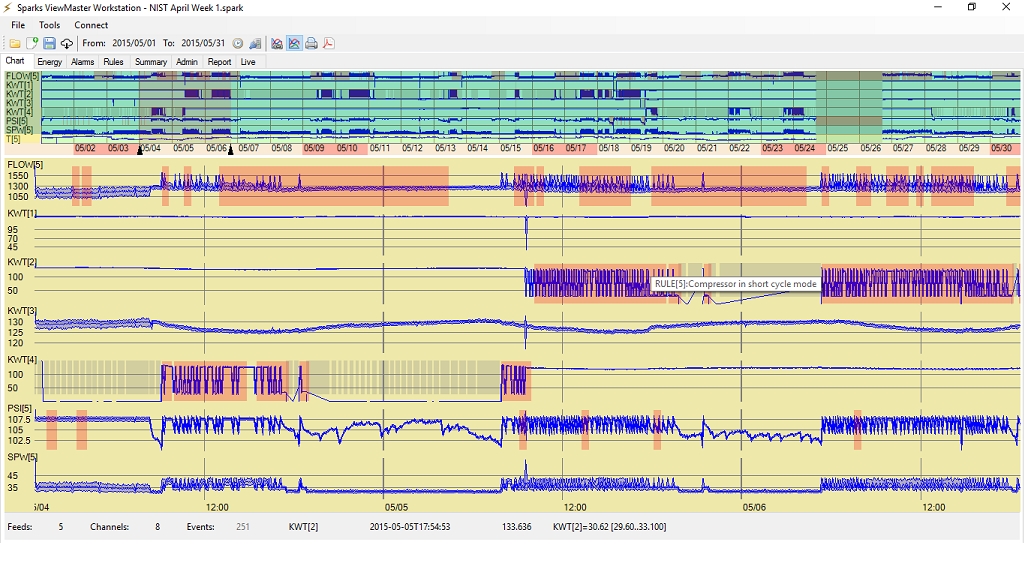 This chart reflects the month of May 2015, the ReMaster system has been streaming data for over a year as of the writing of this article.  The total month’s data is represented by the blue bar near the top of the screen, the main viewer shows an exploded view of the data in more detail as defined by the user designated viewing window represented by the triangle sliders and grey area on the blue bar.  This area also shows in more detail identified anomalies using data analytics such as flow or pressure moving outside of a predefined window for that time period or an abnormal operating condition such as compressor short cycling.  A few basic patterns emerged:

NIST Facilities Management was getting ready to write a requisition to rerate or add a new air compressor because they were concerned that at times all four compressors had to run and if they lost a compressor they could not maintain the pressure on campus without having to source a rental compressor.  Sparks Dynamics used the energy analysis / report tool to develop a plan to replace the entire system taking advantage of the Pepco (local utility) rebate program.

Centrifugal air compressors by design are a good application for larger compressed air systems that have relatively stable flow demand ranges that can be met within the throttle limits of the compressors. They have the advantage of providing oil free air at constant pressure and have relative good specific power performance over 300 HP or so. The installed air compressors and their control systems, however, were not matched appropriately to this load profile resulting in a high system specific power range of 33 to 38 kW/100 cfm.

A compressed air system was designed that would replace the existing inefficient system with a system that would incorporate fixed speed and variable speed drive (VSD) oil-free rotary screw compressors.  Using manufacturer’s published CAGI data sheets it was engineered so that the system could always operate in an efficient specific power envelope of approximately 20 -21 KW/100 CFM. The actual data for 30 days is used to model a new system by entering energy cost, demand reduction, and new system projected specific power. (In this case there was no reduction in projected demand – a follow up project will sub meter compressed air in major air user buildings).

The proposed (now installed) system will continuously run one fixed speed 150 HP oil-free rotary screw air compressor and trim with one 200HP VSD oil-free rotary screw compressor. During periods of increased demand a second 150 hp fixed speed air compressor will become part of the base load. The units are controlled through a manufacturer supplied integral sequencer. The plant air is critical so there must be at least one back up VSD air compressor available at all times.  The project to replace all four air  compressors was done under “hot conditions” where the compressed air system was operated continuously and one compressor replaced at a time.

Sparks Dynamics funded this project through two separate sources to ensure a total replacement compressor system complete with controls and monitoring could be provided.  Sparks Dynamics submitted the energy analysis report as part of a Pepco custom rebate application on behalf of the customer.  The customer assigned the rebate to Sparks Dynamics allowing us to provide the compressed air system solution at half the price of the previously budgeted proposal. A NIST certified small business contractor provided the turn-key installation of the project.

The total cost of the oil-free rotary screw air compressor equipment and turnkey Installation was \$875,000. This cost was reduced by the Pepco Rebate of \$375,000 to make the total NIST project costs  $500,000. The annual savings (confirmed with post installation monitoring) were \$144,000 with a simple payback of 3.5 years. 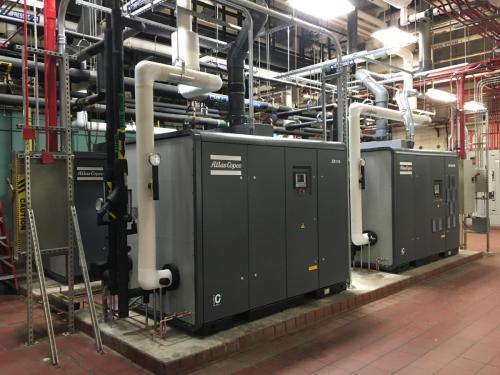 After system installation, the ReMaster monitoring system confirmed the projected energy savings and continues to monitor the system.  Additionally the compressor control panels were integrated into the ReMaster System through the Modbus interface and now all of the compressor panel data is streamed to the Sparks cloud service for continuous monitoring and anomaly identification for predictive maintenance purposes.