Most “sequencers” on the market have been designed to work with screw (or reciprocating) compressors, “positive-displacement” type. When these controllers are adapted to centrifugal compressors, the net result is not always optimal. The result can be higher energy usage and lower reliability than manual, separate operation.

Secondly, centrifugal compressors can’t reduce inlet flow below their “surge” point, somewhere between 60% and 80% of full load capacity, depending on the specific aero. Screw compressors can efficiently run from 0% to 100% in a variety of ways (variable speed, variable displacement, load-unload, start-stop or a combination).

Third, centrifugal compressors are generally designed for “proportional,” not “discrete” control. Typically, they are not run as load-unload. Their bearings are also not typically designed for frequent on-line/off-line operation. I am aware there are some centrifugals being introduced on the market claiming to be able to operate like a screw compressor, and have reverse thrust bearings. However, for this article will assume conventional centrifugal compressor design with high speed axial bearings.

Finally, part-load performance of some centrifugal compressors is not good sometimes, even without blow-off. The compressor is 10% to 20% off its “best efficiency point” when running inlet modulated. Not bad, but not ideal.

Fifteen years ago, I performed a Level 1 audit on a compressed air system with four 800 hp Joy TA centrifugal compressors. See Figure 1 for the system, as found in 2002. Three were running in parallel, with local controls, and one running in a segmented part of the system. Two compressors would be blowing off, one in each subsystem, about 10%, still a high number for a system this large, about \$50,000/yr of waste. They were all running through regenerative dryers, some of these were purging type, adding random load to the compressors whenever they started to purge.

In the Level 1 report, I recommended a master control system to optimally run the compressors, as well as dryer upgrades. At that time, I had not yet had experience implementing this type of master control, and might have oversimplified the process for the site. 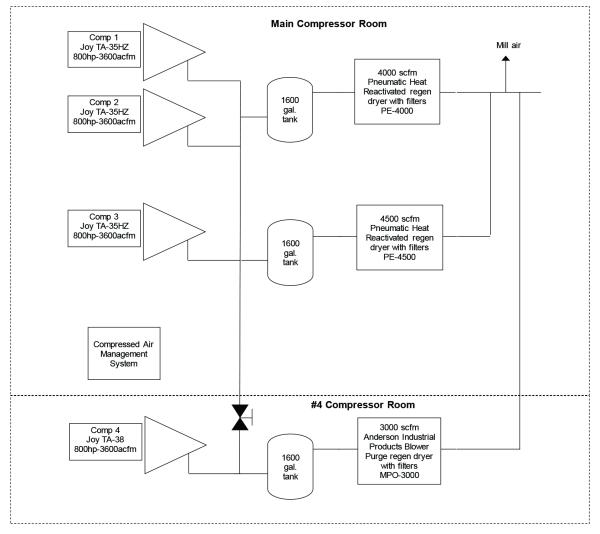 The next time I was at the site, in 2010, I observed the system after a less than perfect project was implemented. They decided to install individual new control panel upgrades for all four compressors and stage them, (in a “cascade” manner), without a master controller. The new controls faithfully started and loaded/unloaded the last of four compressors. This was mainly due to a false load from dryer purge, and cycled the third one when the dryer stopped purging. The combined compressed air system had more blow-off than in 2002, about \$80k/yr of waste. Energy had gone up, not down. See Figure 2 for the flow ranges where blow-off will occur when you cascade-control multiple centrifugal compressors, about 70% of the time. See Figure 3 for the actual power versus time for this specific system. 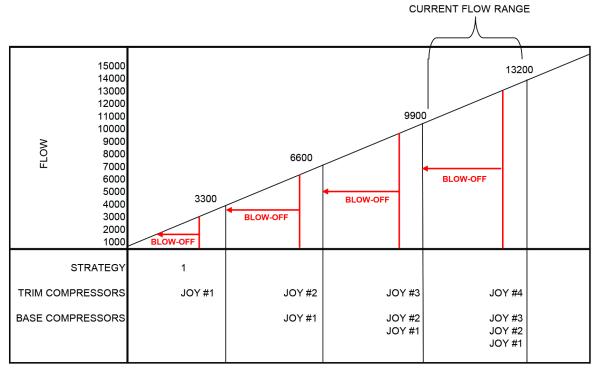 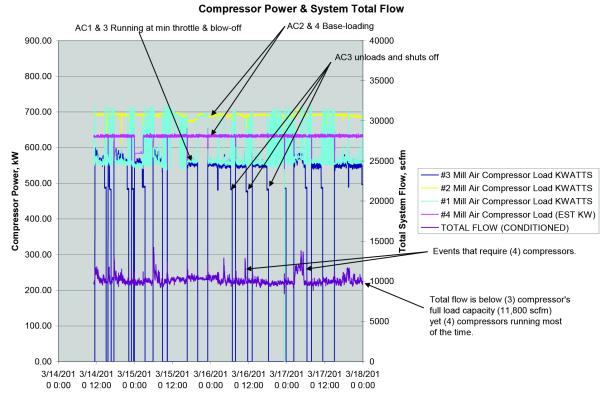 In order to eliminate, or at least minimize blow-off, a different type of master control than cascade control needed to be implemented. Several alternatives were assessed. This article will discuss two, “load-sharing” and “hybrid”.

Picture two draft-horses, both pulling evenly on the same plow, in parallel. To make this happen, they need to be harnessed correctly, pulling evenly and straight. The plow itself tends to adjust to keep the pulling force even between them. It wouldn’t stay straight otherwise. Draft horses are more amenable to being “partly loaded” than a centrifugal compressor. If they had a low capacity “surging” problem, it would be as if they could only pull hard or not at all, or risk yanking on the collar, then slacking, going back and forth.

The driver has multiple levels of control, including harness adjustment and reins. The harnesses of each horse can be adjusted so the force in the “trace” is likely to be balanced, assuming the horses are pulling equally. The driver then uses the reins to control each horse to pull as evenly as possible, or to intentionally pull asymmetrically to turn the load.

Similarly, two centrifugal compressors running in one system need enough load to be able to share it evenly, and when loaded need a compensating mechanism to share the load evenly. This is made more difficult if the compressors are not side-by-side, like the draft horses. But, it is still practical to do load-sharing.

Load-sharing is essentially done by “bumping” compressor set points, within a pressure range, to get both compressors (or a set of more than 2) to be all operating in the upper range, with none blowing off, if possible. The more compressors there are in the system being load-shared, the more combined “turn-down,” and the less likely blow-off is. For instance, for the compressors in the example project, we measured the following performance points:

With one compressor running, turn-down is only 1,000 icfm. With two, the two compressors combined have a turn-down of 2,000 and so on. So, the more compressors running, the more potential combined turn-down without blow-off. This is, if one could bump set points of all the units so they shared the load evenly.

If all were set at the same pressure, say 100 psig, and the piping between them was sufficiently large, they would almost be able to load-share on their own. In real systems, however there are different pressure differentials between each compressor discharge and the common header. This results in uneven sharing. For instance, if one of the compressors in this system had a restrictive piping, requiring 2 psi more to hit the same discharge pressure as the other three, it could swing the compressor more than 30% in capacity. Three of the compressors may be at 90%, while the fourth one is at 60%. The unit at 60% would be in blow-off. If it stayed there too long, local controls might unload the unit, pressure would drop quickly, and it would need to instantly reload, causing instability.

A load-sharing master controller would sense the real-time condition of all compressors’ inlet and blow-off valves, and would “bump” the set point of the compressor in blow-off in small increments to get it out. In this case, it would bump the unit at 60% to 100.25 psig, then 100.5 psig, until the blow-off valve closed and the inlet opened up. As pressure rose slightly, the other units would throttle back at the same time, without a change in set point. The set of four would about settle out with three at 85%, and the fourth at 75% with no blow-off. Performance wouldn’t be “perfect,” but much better than before. The specific performance is still lower at partly throttled than at full capacity, but better than if blowing off. And the system would be more stable. At lower flows, however, blow-off would be unavoidable. There is not enough turn-down to avoid it at two and three compressors running. See Figure 4. 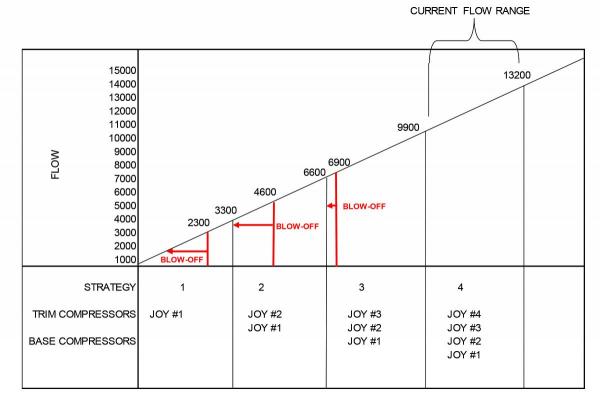 Some load-sharing algorithms only balance the compressors. They don’t turn off a compressor at the point there is sufficient turn-down. This is okay for systems with flat loads. But if demand floats, a master control system able to start and stop, along with load-share, saves more energy.

For instance, at 9,900 acfm, or less, and four compressors running, a load-sharing master controller could direct one of the centrifugal compressors to unload, then stop if the other units were able to fully load and carry the 9900 scfm. There are some controls risk for this transition, but a qualified master control engineer could tune the compressors and master controller to shift smoothly without a pressure dip.

Implementation requires more than just adding a black box. Older compressors might need new inlet and blow-off valve actuators and better surge controls added to enhance the compressors’ speed and accuracy for following the load, without surge. We are aware of several compressor OEMs with load-sharing available, but require the customer’s DCS system to direct a compressor to start or stop. Some might be available with start-stop included. Consult your dealer. In any case, it is a team effort. What we strongly recommend is flow metering on each compressor, a qualified centrifugal compressor technician to thoroughly review the compressors, test the surge and integrate the master control system.

Since performance degrades as the inlet valve closes back, 15% in this example project, one might suggest a hybrid system using a screw compressor for trim with the centrifugal compressors base-loading. This can work if the screw compressor is big enough. In most larger systems, it is not practical to install a screw compressor large enough to do this. It would need to be over 3,300 ifcm, and over 800 hp. A hybrid system using a simpler base plus trim control first, then load-sharing only in the upper range, would be more efficient than pure load-sharing. Depending on load, the system can be at its best efficiency point (full capacity for the centrifugal compressors).

For instance, at 11,000 acfm, you can base-load three centrifugals and trim one 500 hp screw compressor, and result in 10% less energy than the pure load-sharing system. Total power would be only 2,161 kW, this is 194 kW less than pure load-sharing. See Figure 5 for the strategies, assuming a 500 hp, 2,200 icfm load-unload trim compressor. 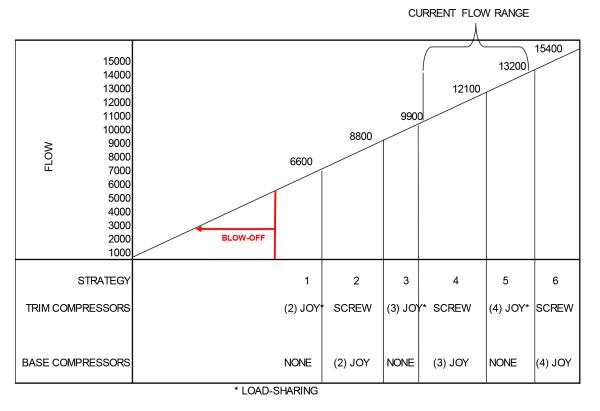 My customer decided to implement the “hybrid” system. Figure 6 shows the system design. In addition to adding the trim compressor, they improved the compressor discharge header piping and replaced a dryer. 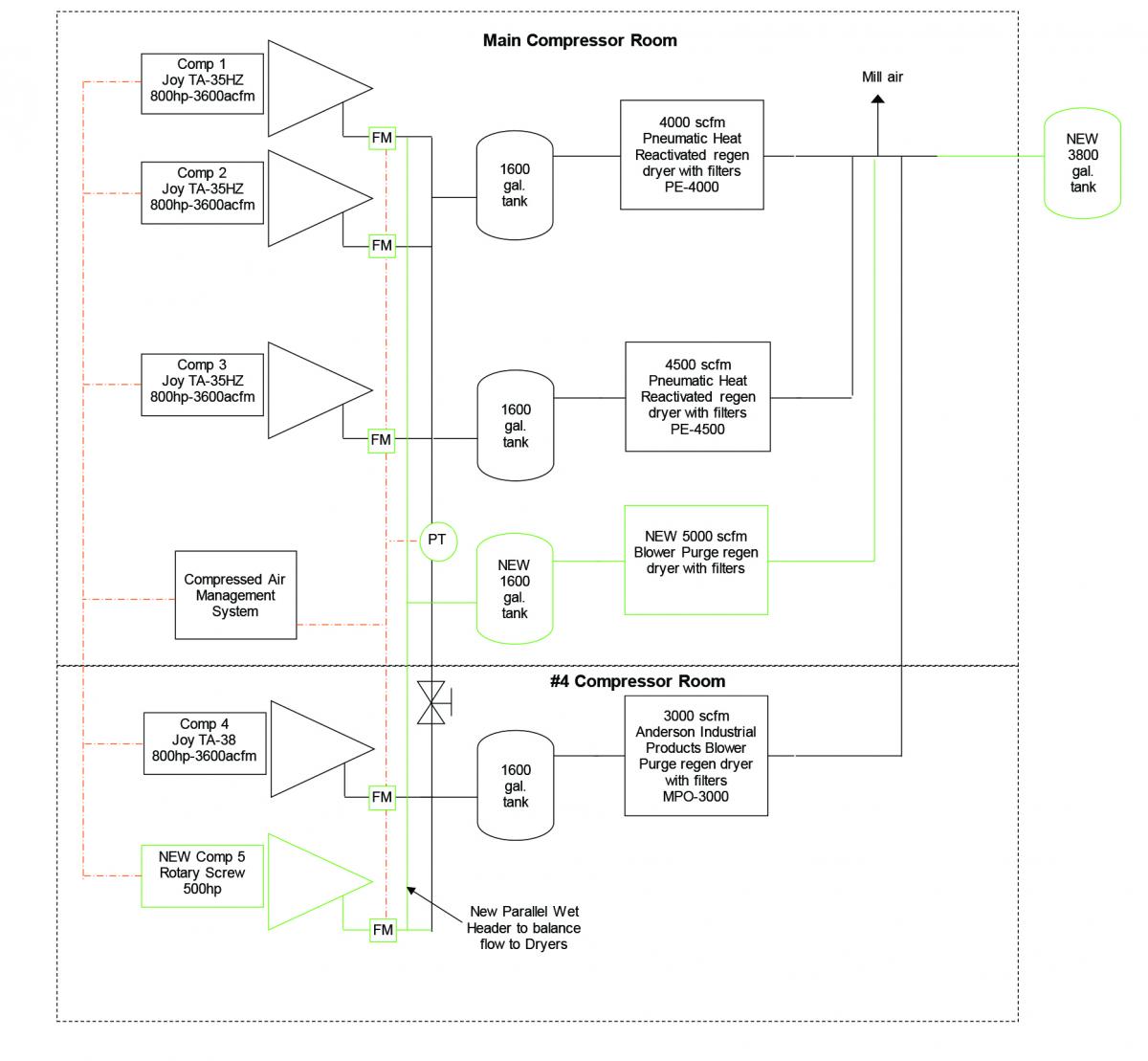 This project cost about \$900k. They also got a \$392k incentive and saved \$92k/yr in energy, so for them, it was worth it. For your system, you might not have the budget to do all the improvements my customer did. Just load-sharing and DCS controls would have saved about half as much, over \$45k/yr. The controls part of the project cost less than \$100k, including all engineering and installation. After their utility incentives, it would have been less than a one-year payback project.

Load-sharing is an important part of a multiple centrifugal-compressor master control system. It minimizes blow-off based on the available turn-down. In addition, remote start-stop saves more energy if load floats between different ranges. Finally, adding a screw compressor and implementing a hybrid control system might save the most energy and provide the best back-up. In any case, a well-instrumented system allows engineers and operators to assess, optimize and tune the system.