A major Midwestern aluminum plant was experiencing dwindling compressed air capacity, primarily due to air leaks. If those capacity issues went unresolved, the facility would have needed rental compressors to keep up with demand. Instead, they turned to flow metering to identify and fix the leaks. In this article, they share their solutions with others who may be having similar difficulties.

“We have a huge operation here smelting aluminum and making sheet aluminum for the food and beverage industry,” said Mark, the utilities engineer. “A short while back we began to lose compressed air capacity. First I checked our air compressors. We have two centrifugal compressors that put out about 20,000 standard cubic feet per minute (scfm) backed up by eight reciprocating piston compressors that come on as demand increases. Compressed air system pressure is between 80 and 90 psi and our compressors run 24/7/365.”

He continued: “I checked all of them, and all were working at their listed capacity. So we knew that air leaks must be responsible. We saw over time a gradual increase in demand. Different operations run at different times, so demand is never constant. We went into the winter, and demand kept increasing to the point that we were running everything we had. On days of high demand we were barely keeping up the pressure. If demand continued to increase, we would need to rent additional compressors, and they aren’t cheap — about \$100,000 a month plus fuel. As utilities engineer, I had responsibility for the compressors. So I needed to find out where the leaks were so we could repair them and restore capacity.”

“At that time we had limited flow measurement capability, so I went online looking for a portable flow meter, one that I could take around the plant and check for flows that were higher than they should be, which would identify serious leaks. Most flow meters I found were intrusive — they had to be installed inside the pipe, so that left them out. I looked at some clamp-on ultrasonics, but they didn’t seem robust enough for my needs. Then I finally found one that looked good on paper, so I gave them a call.”

Mark called a representative of FLEXIM Americas, a manufacturer of flow meters for liquids, gases and process analytics.

“We got the call, and Mark asked if our portable meter would measure compressed air flow in the range of 80 to 90 psi,” said Steve Davis, Midwest regional manager for FLEXIM Americas. “I told him that was at the low end of our scale for gas measurement, but that the meter would do the job.”

“The technique that FLEXIM’s ultrasonic flow meters use is called transit-time difference,” Davis explained. “It exploits the fact that the transmission speed of an ultrasonic signal depends on the flow velocity of the carrier medium, kind of like a swimmer swimming against the current. The signal moves slower against the flow than with it.”

“When taking a measurement, the meter sends ultrasonic pulses through the medium, one in the flow direction and one against it,” Davis continued. “The transducers alternate as emitters and receivers. The transit time of the signal going with the flow is shorter than the one going against. The meter measures transit-time difference and determines the average flow velocity of the medium. Since ultrasonic signals propagate in solids, the meter can be mounted directly on the pipe and measure flow non-invasively, eliminating any need to cut the pipe. And, since there are no moving parts, the need for calibration is virtually eliminated.”

When first introduced, ultrasonic meters were met with skepticism, and there was one problem with them that justified that doubt. According to Davis, the couplant grease that sealed the transducer to the pipe would migrate out over a few years, and the meter would begin to give inaccurate readings. FLEXIM solved the problem by developing a non-grease solid pad couplant. Because of their success in the field, ultrasonic flow meters are now accepted as a highly accurate, non-intrusive measurement system.

“We had Steve in to demo his meter,” Mark said. “We were all pretty skeptical it would work. At first it looked like we were right. Steve had a few problems getting it to work at first. But it only took a little while, and he got the meter working. Everybody was impressed with both the accuracy and the ease of installation. I got the authorization to buy one immediately. I bought FLEXIM’s G601 portable model designed for measuring gas flow.”

“As soon as I got it, I started going around the plant measuring flow,” he continued. “It was quite successful. We literally have miles of distribution piping. It even measured one-inch pipe, even though it’s not supposed to. But you can trick it out to do it if you know how the meter works — the physics of it. I spent a year and a half slapping that thing on every pipe in this plant.”

“Air leaks equal a tremendous amount of wasted money, and we spent all winter finding leaks and proving where they were to the engineers involved. The departments’ personnel began the task of fixing leaks or replacing equipment. They were motivated by the potential expense involved if they ignored the problem.”

“We were able to identify the most significant leaks and pinpoint them — bag houses were some of the worst offenders,” Mark said.

Bag houses are dust collection systems that suck air through a duct system, and the bags catch the dust. Periodically the bags clean themselves by pulsing compressed air through the bags. The dust goes into a hopper and is removed. There’s a solenoid on each valve that opens up real quick, releases a puff of air, then shuts.

“We have a lot of bag houses, and a lot of those solenoid valves were stuck open,” Mark explained. “We were able to calculate what a bag house should use, measure the flow with the meter, and some bag houses that were calculated to have a legitimate demand of 750 scfm were using more than 3,000. And nobody knew it because until we got the portable ultrasonic, we couldn’t measure flow. We charge each area for its compressed air use, so now that usage was going to be accurately measured, everybody was onboard immediately to identify and repair air leaks.” 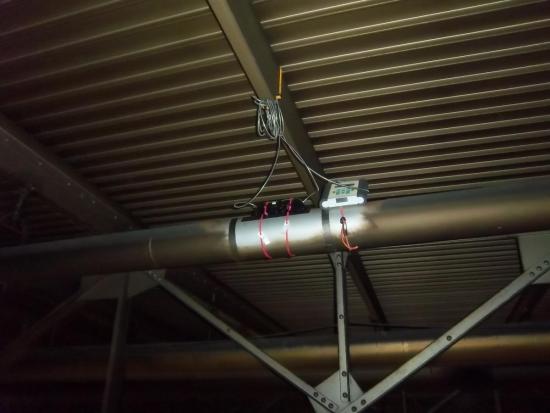 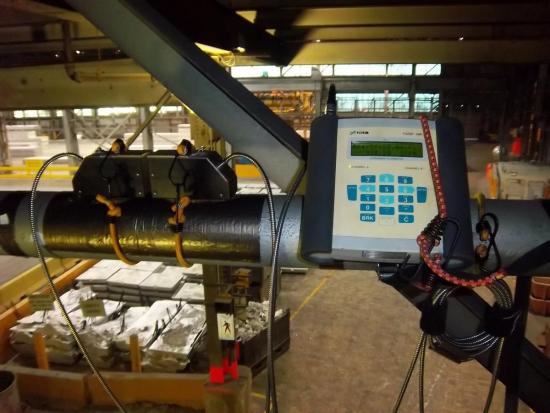 The aluminum plant installed two ultrasonic flow meters — both on the main compressed air headers 60 feet above the floor.

Identifying Leaks in the Smelting Operation

“We also had leakage problem in our smelting operation,” said Mark. “It’s a constant, flowing procedure where we use large amounts of electricity break down alumina powder into aluminum and aluminum oxide. We need to keep a constant supply of alumina to the rectangular-shaped pots.”

According to Mark, the problem with this type of smelting operation is that the aluminum oxide forms a hard crust on top of the smelted aluminum bath. Alumina has to be constantly fed into the pots in a finely tuned process.

The plant personnel overcome this difficulty by using two compressed air driven, chisel-headed cylinders on each of the pots. This equates to over 1,500 air cylinders. Every few minutes, a cylinder will punch a hole into the crust and, at the same time, it will open a vessel above it. Alumina powder will flow through the hole and into the bath. Unfortunately, after performing this action thousands of times, the cylinders begin to leak air. Manual inspection is iffy at best.

“We only knew for sure which ones were leaking when performance began to drop. That meant costly down time,” Mark said. “When they leak they have to be rebuilt or replaced.”

“By going around the whole smelter and measuring the compressed air flow, we were able to identify the worst and plan their replacement during planned downtime. Once we got going with this and the smelter engineers saw the data the meter provided, they realized how much time and money they could save. They wanted me to measure every pot line in the operation. I would measure a number of cylinders, download all the data I had gathered, and analyze it. We were then able to identify the most at-risk cylinders, and the smelter engineers were able to plan timely repairs or replacement.”

“Between the smelter and packaging, we did the whole plant and identified all the areas where they were using too much air,” Mark explained. “For that year, more than half of the day I was measuring air. The direct cost savings just for rental compressors and their fuel was estimated at \$300,000. And that wasn’t the only savings. Our cost to sustain one continuous standard cubic foot of air per minute for one year for us is in the 80-dollar range. We went from running 32,000 cubic feet at max points to about 22,000.”

“We use high-temperature water as a heating medium for some of our processes. Our high-temperature, closed-loop water system delivers hot water at 350°F,” said Mark. “We use the heat from heat exchangers to heat buildings, process fluids, wash aluminum sheets, etc. We pay the power plant for the high-temp water, and we had an issue. We had no meter to measure what we were receiving. The only meter involved was an orifice meter at the power plant. They told us how much water we were using and how much to pay.

“But we had a history with them of lower temperatures than we wanted, and sometimes we felt the flows to our process areas were slower than we needed,” Mark explained. “I proposed another FLEXIM meter for the hot water line. After our experience with the FLEXIM portable, I had no problem getting approval to purchase a permanent clamp-on FLEXIM liquid meter to measure the flow and temperatures to and from the plant. Now I’ve got sensors on the supply, on the return, and I’ve got temperature sensors on the pipe.”

“Because of my previous knowledge of the air meter, I knew how the new one worked and had it installed and working in very short order. Both meters have data collection ability. The power plant was saying one thing, and we were saying another. Our flow data were showing lower by 500 gallons per minute or more than the power plant. Then we got into some other problems in the winter when the temperature of the water dropped and finishing lines were unable to maintain run speeds. I pulled the data from the meter and showed power plant engineers our flow and temperature data.”

“We got together and started understanding each others’ processes. They ended up checking their orifice plate computer and found it was calibrated wrong. Their guy looked at our figures and said, ‘Well your numbers make sense because the maximum we can pump is 4,000 gallons per minute, and were showing 4,300 gallons right now.’ Who knows how long its been out of calibration. After they made their calibration adjustments, our number got a lot closer together.”

To read more about the Metal Industry, please visit www.airbestpractices.com/industries/metals.