Technology is available which enables a compressed air flow meter to measure not only the magnitude of the flow, but also the direction. Why is this important? In this article we will describe two case studies where bi-directional compressed air flow measurement plays a key role to come to the right conclusions. In the first case study, we will describe an electronics manufacturing plant, which has a large interconnected ring network with two air compressor rooms located in different buildings. The two air compressor rooms are about five hundred feet apart. In the second case study, the effect of compressed air flow measurement upstream of a local receiver tank is described.

The worlds first thermal flow sensor made in a silicon (not silicone!) chip was invented forty years ago by one of our founders, Anton van Putten, back in 1974.  His unique design can be seen as the blueprint of many thermal mass flow sensors, found in automotive, HVAC and industrial applications. The original Thermabridge™ sensor combines flow direction measurement with thermal mass flow sensing over a full 0…150 mn/sec range.  This enables you to measure flow in complex ring networks, where any other flow meter would deliver very unreliable measurement results. Who would have thought that his invention would become so important for accurate compressed air measurement? 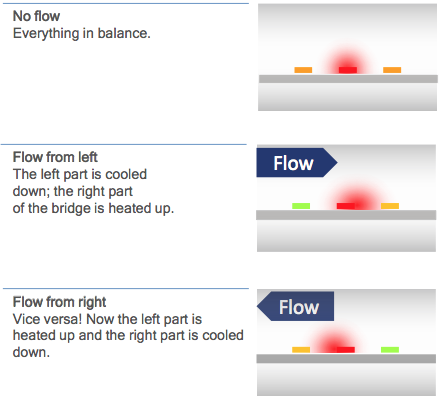 At a large electronic component manufacturer, compressed air is used for the entire production process including injection molding machines, the handling and packaging of products, picking and placing of components, and the plating and galvanizing of metal parts. An energy management program had been initiated to reduce the overall energy consumption of the plant. Compressed air was one of the utilities that needed attention.  The air compressors in the factory were quite old (> 10 years) and there was room for improvement, from an efficiency point of view. To select the right compressor, the demand profile of the factory needed to be measured. But the company realized that permanent monitoring is key to long-term savings. So instead of hiring an audit firm to perform a temporarily audit, they choose to implement a permanent compressed air flow monitoring solution - which could eventually be expanded towards other utilities. The initial goals for phase 1 of the project were:

During phase 1 of the project, we installed four compressed air flow meters, to get a clear picture of the average demand. But after a couple of months, we encountered an interesting situation where standard uni-directional compressed air flow meters would provide useless results. In this particular situation, back-flow towards the receiver tanks caused wrong readings, resulting in severe measurement errors.

At compressor room B, two flow meters are installed in a ring network to measure the air delivered to the network by a compressor. Between this compressor and the network, a large receiver tank (5 m3) is installed.

In room A, three rotary screw air compressors were installed. The machines were used for the daily base-load. Each air compressor is fitted with a heat of compression drum dryer. Between the pipes and the compressors, two large receivers are installed, 5 m3 each. From the receivers, two separate pipes supply compressed air to the production processes.

One pipe is connected to another building where compressor room B is located.  The distance between the two compressor rooms is approximately 500 feet.

In compressor room B, one relatively new air cooled ZT 145 machine is located. Air leaves the air compressor and enters a heat of compression drum dryer and then into another large receiver tank. Due to space limitations, it was not possible to install a single flow meter between the 5m3 receiver tank outlet and the network. Instead, two flow meters were installed further away, in the ring network, just after a T-junction, where the compressed air was fed into the ring. Initially, these standard VPFlowScope flow meters were unidirectional. In other words: they would not see the difference between forward and backward flow. After a couple of days, strange measurements were observed. The flow meters were showing considerable measurement values when the compressor was turned off.

Reverse Flow or Not?

After taking a closer look into compressor room B’s configuration, we came to the conclusion that there had to be reverse flow when the air compressor was turned off.  The following pictures explain this effect in detail.

During unload and off hours, the two uni-directional flow meters showed consumption, while one would expect zero flow. The large receiver tank is filled by the other compressors (from room A) when the local air demand in the ring network is low, and it delivers air to the network when the local demand is high. You can see the receiver tank as a big balloon interacting with the network.

Room B Air Compressor in a “merging traffic” Situation

When the compressor is running loaded, compressed air is fed into the ring network. In the T-junction, the flow merges with existing “traffic” based on how the consumption in the ring mains is balanced. If the consumption is well balanced, it might be perfectly symmetric (50% left, 50% right), but when the consumption on one side is much higher, the air flow will distribute differently. Pulsating demand can also change the flow distribution for a short period of time.

The compressed air coming from the air compressor merges with the air which was already flowing through the ring network.  This can result in a high or low reading, depending on the actual demand and the resulting flow direction. 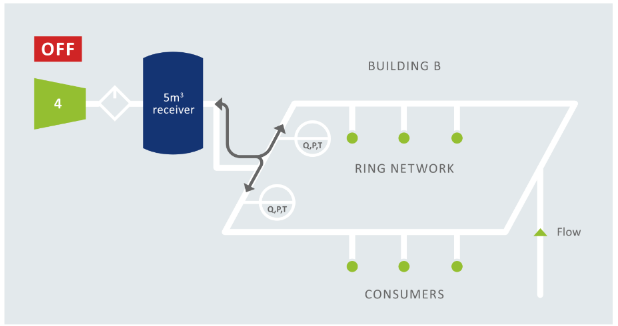 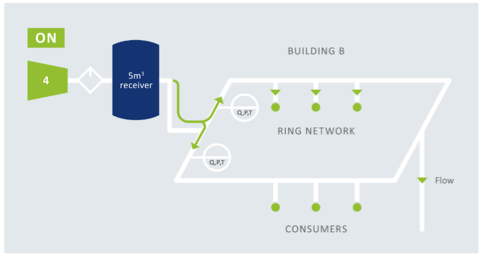 Room B Air Compressor in a “merging traffic” Situation

A uni-directional compressed air flow meter does not have a clue where the air is coming from.  This results in large errors. This applies to most thermal mass flow meters based on thermal dispersion, constant temperature anemometry and so on.  Other examples of uni-directional flow meters are vortex meters and turbine meters, which read-out via a standard pulse transmitter (the actual counter on the turbine meter will turn backwards). Venturi’s are also uni-directional. The differential pressure signal will not change to negative when flow is reversed.  Orifice meters can also measure reverse flow, but they are not so suitable for compressed air due to their permanent pressure loss.

At the end of this period, the effect can be seen very clearly: The compressor turns off, in the left graph where the two bi-directional flow meters cancel each other out, and the resulting flow is nearly zero. In the right graph, the flow is not cancelled out, resulting in a ghost signal of nearly 13 m3/minute. 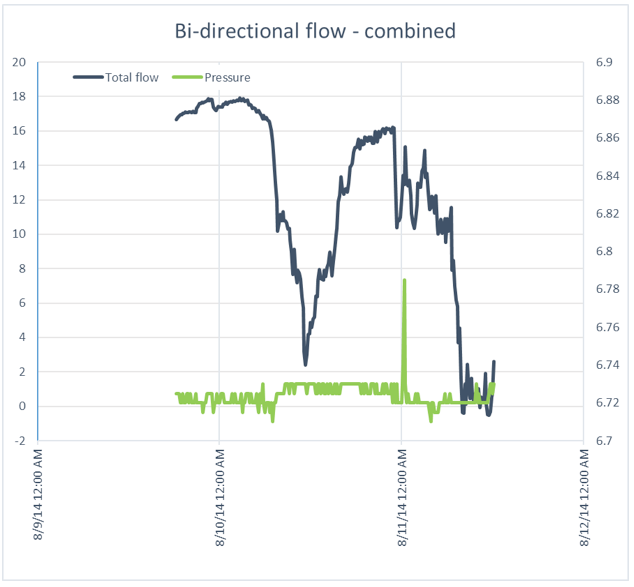 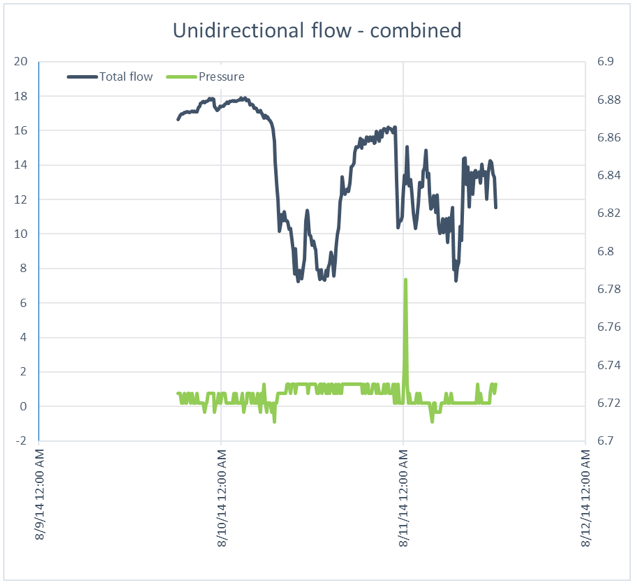 One could say,  why not correlate this with load/unload data from the air compressor? When the compressor is in unload or off-state, you know the flow is zero, so you can compensate for it. We think this is not the best way to solve the reverse flow problem, as there might be other (real) reasons for reverse flow, which would remain unnoticed. For example, a leaking non-return valve, a leaking seal or blow-off valve.  In this particular case, we found a leaking compressor seal.  This leak cost 1,314 Euro per year and it took only 500 Euro to fix it. Another leak was found in a dryer. Again, this compressed air dryer leak was upstream of the flow meter, so it would have remained unnoticed if the flow meter was uni-directional. The result was a leak savings of 2,102 Euro per year fixed with a cost of only 100 Euro by replacing a hose.

In some cases, a decentralized receiver tank is used to “shave off” the peak load on the network. For example, when a machine has a large intermittent consumption profile. A question is often asked: where to place the flow meter, and what will the flow meter show us when the machine has been turned off? This part of the article is based on an older audit at a potato food-processing plant, where we used a standard thermal mass flow meter without bi-directional sensitivity. The picture below shows the setup. 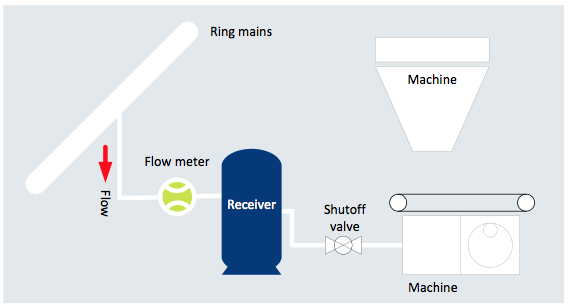 Test setup: The point of use flow meter was installed in between the receiver tank and the ring mains. Why? Because there was not enough straight length downstream of the shutoff valve.

The auditor called us after a couple of days, to discuss the results. The compressed air flow meter showed significant consumption while the machine was isolated from the network. The receiver tank was simply acting as a local buffer for machines further downstream the line. It was filled, and emptied at the pace of their consumption, causing significant readings on the thermal mass flow meter. In this case, the issue was finally resolved by ignoring the data during the period when the machine was shut off. But in other cases, there might not be a way to correlate local actions or events with data. In those cases, when looking at data from a uni-directional flow measurement device can lead to wrong conclusions.

Other Issues You Can Discover with Bi-directional Sensors 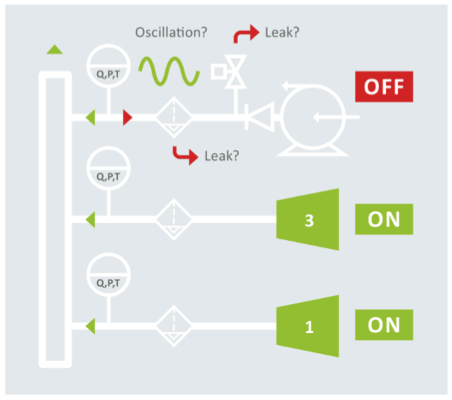 Using a virtual channel, data of two (or more) flow meters can be combined into one signal.

In the central VPVision energy monitoring software, using a virtual channel, data of two (or more) flow meters can be combined into one signal. The channel adds/ subtracts all measurement values, based on their flow direction. The resulting values can be used in real-time graphs and reports.

Founded in 1999, VPInstruments offers energy management solutions for compressed air and technical gases. Our flow meters are based on the original Thermabridge™ technology, as invented in 1974 by our co-founder Anton van Putten. Thanks to our monitoring solutions and flow meters, companies worldwide measure, monitor and manage their compressed air system, from supply to demand side.