Stop Operating Blind – Use a Flowmeter


Participants of Compressed Air Challenge’s Fundamentals of Compressed Air Systems seminars are usually surprised to learn that compressed air is one of the most inefficient energy sources for machine operation in your plant. To gain about one horsepower of mechanical energy from a compressed air powered motor it costs seven times as much at the input of the air compressor. And surprisingly between 20 and 30 percent of this valuable power is lost even before it gets to the end use. Further to this another 10 percent is lost to artificial demand caused by higher than required pressure, and to top that all off, another 10 percent is wasted by equipment that is either inappropriately supplied with compressed air or left to consume air even when the associated production machine has been turned off.

These facts are surprising to people because their compressor rooms are notoriously lacking in even the basic instrumentation that could tell them the energy and flow characteristics of their system. Often large amounts of time and money are expended in optimizing the production side of a compressed air system, but the system operator has no idea if the new upgraded equipment is producing air as efficiently as expected or if that efficient produced air is wasted or misused.

An old management axiom is: “If you can’t measure it you can’t manage it.” This is still as true today as it was when it was first uttered by wise men many years ago. But in the old days, where compressed air was concerned, there may have been some good excuses for ignoring compressed air flow measurement. Years ago pretty much the only way to measure compressed air was to install orifice plate meters. These units introduced a pressure loss into the system, which was actually the way the measurement was done. The flow meter instrumentation of the time had to measure the plate pressure differential and equate this to a particular flow. Due to the square function characteristics of the pressure drop the meters could be accurate at higher flows near full rating, but as the flow decreased the rapidly diminishing differential pressure became too small to measure, resulting in poor turndown characteristics. These also meters had to be calibrated for a certain pressure and became inaccurate if the pressure changed. These meters introduced costly pressure differential into the system at high flow and had only limited accuracy for determining flows at low flows, where leakage rates are usually measured. Many older plants still have orifice plates still installed, many of which have instruments that are out of service, but the plates are still robbing the system of energy. If you have one it may me time to consider removal.

In these modern days of low cost electronic instrumentation many new ways to measure flow have been developed. The most popular of these is the thermal mass flow meter. The principal of design of these meters was actually invented in 1914 by L.V. King who noticed that his hot wire anemometer measured the mass velocity at the point of flow. The meter works using two temperature sensors, one heated and the other static. Mass flow is proportional to the amount of power required to keep a constant temperature difference between these sensors in a flow of gas. Modern day thermal mass meters are inserted into a pressurized compressed air line using a number of different mounting strategies, including hot tapping. The result is an accurate signal output that is not affected by changes in air pressure. If the flow meter is calibrated for a given pipe size, and the probes properly positioned in a turbulence free airstream, an accurate flow profile can result with a typical turn down range of about 100:1. Thermal mass meters suffer from an important issue, they need to be placed in a airstream that is dry, the presence of free water interferes with the proper display of flow due to the much higher cooling effect of the water. Therefore these flow meters must be installed after the air dryer and will be affected if the dryer is not functioning properly. This downside is offset by the fact that these flow meters present no pressure differential to the flow of air and recent advances in meter design has lowered the cost of some units to very low levels making them affordable even for small systems.

Many of the meters require a pipe length of at least 20 times the pipe diameter upstream and 10 times the pipe diameter downstream of the meter to reduce turbulence, which induces inaccurate results. The manufacturers' requirements must be observed for accurate readings. Mass flow meters are preferred because they are pressure and temperature compensated. It is important to be aware of the differences between mass flow (scfm) and compressor capacity in acfm or icfm. Some of the considerations in selecting a flow meter include estimated maximum and minimum flow rates and operating pressures and temperatures. The performance is based on an accuracy of perhaps 0.5 percent at full scale and the "tum-down" or range ability of the meter. The turndown capability is important to be certain that a specified accuracy is maintained down to whatever percentage of the maximum flow is anticipated to be the minimum. It is recommended that a flow meter be installed in the piping where the compressed air is clean and dry.

Because a mass flow meter normally is installed downstream of dryers, the meter will be measuring a rate of flow of air from which most of the moisture has been removed. Knowing the temperature and relative humidity of ambient air to the compressor inlet and the pressure dew point of the compressed air flowing through the meter allows you to determine the difference between scfm (meter measurement) and acfm (compressor inlet flow) (see Section 1.A.6 in the BPM).

It also is necessary to know the scfm standard used by the meter manufacturer. The old standard used by CAGI of 14.7 psia, 68°F, and 36 percent relative humidity has been superseded by the new standard of 14.5 psia, 68°F, and 0 percent relative humidity. The old standard cubic foot requires 1.38 percent more acfm due to pressure and 0.83 percent less acfm due to moisture content, giving a net positive difference of only 0.54 percent.

A regenerative dryer can use up to 15 percent of the incoming compressed air supply as purge air to regenerate the desiccant. Installing flow monitoring sensors upstream and downstream of the dryer could be expensive but will provide the necessary monitoring to ensure the dryer is not purging more than is required.

The installation of a compressed air flow meter in the main supply header will provide an accurate usage profile and also the plant leakage rate during non-production periods. In addition, when combined with electrical consumption readings, the ratio of output air flow to input power provides the basis for measuring system efficiency.

Flow meters in the system are measuring plant demand and not compressor full load outputs. However, if it is noted that system pressure is stable or falling when compressors are fully loaded, the flow meter reading is the entire output of the compressors that are running. Correct interpretation of the recorded results is very important before reaching conclusions. Permanent flow meters are not usually found in systems below 1,500 scfm.

In some cases, permanent insertion measuring ports can be retained and one portable meter can be utilized throughout the system to monitor air usage in particular departments. Measuring flow during non-production hours can provide information on leakage rates or inappropriate uses of compressed air. It is difficult, but often very effective, to charge departments or processes for the use of compressed air.

Use of the Flow Data – Real Example

Figure 1 and 2 shows an example of an output of a flow meter in measuring the flow profile of a large automotive product manufacturing plant that operates in a one shift 5 day a week operation. 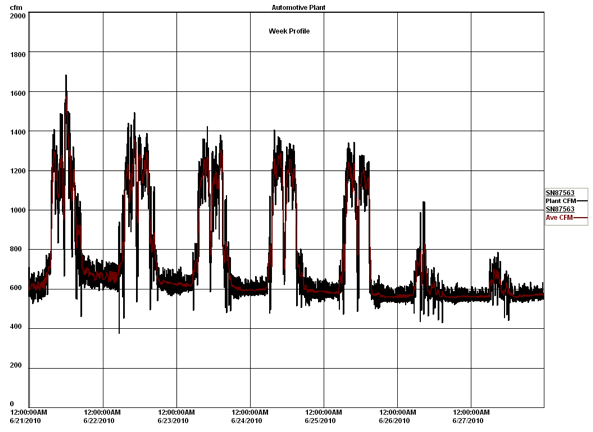 On inspection of the profiles we can see from the data that the plant flow characteristic is typical of a shift oriented facility. Main work activity starts at about 7:00 am and finishes about 3:00 pm with rest and lunch breaks evident throughout the day. As is normal, the period just before lunch is the most active part of the day. It appears the highest activity is on Monday, with workload decreasing steadily as the week wears on. The average flow for the plant is about 750 cfm.

An interesting characteristic of the data is the compressed air flow in the times between production shifts. It appears that during off hours on weekdays the plant flow ranges between 580 and 700 cfm. During weekends the flow, presumably due to leakage and production machinery left on, is about 560 cfm. Amazingly, this wasted flow, measured during times where there is no production, amounts to 75% of all the compressed air produced.

When plant staff became aware of this situation they were interested in knowing what exactly was causing this wasted air flow. Because they had a flow meter they had a ready tool for measurement which they could use to do an assessment on a non-production day. Using an ultrasonic leak detector staff performed a scan of all areas of production to find areas of use. Whenever a significant item was found it was isolated from the system and the corresponding time was recorded. Once the exercise was completed a final flow total was tallied by observing the flow meter and the various items isolated by noting the flow reduction on the available data log chart associated with the time the load was shut off. In this particular case leaks were not the total cause of the off-hours flow, amounting to slightly more than half the total flow:

Table 1: Constituents of Demand - off hours

Armed with this new knowledge the plant personnel set out to find solutions to the issue of after-hours flow. These reductions have been added to a system upgrade project where the load reduction savings will in part help pay for a new Variable Speed Drive compressor and cycling dryer. The flow meter has been reused and has been placed in service as part of an innovative permanent air system monitoring system that generates weekly efficiency reports that track savings due to leakage reduction and changes to compressor control modes. Example outputs of this system are shown in Figure 3 and 4. 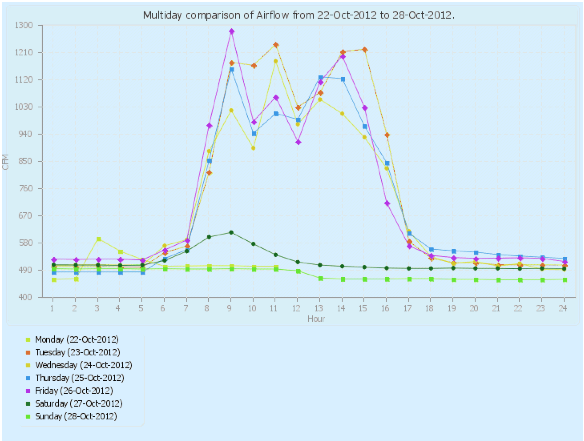 Because this customer is constantly measuring the flow, and analyzing the data weekly, the savings for the project can now be verified by the power utility and the leakage levels tracked. Before the installation this customer was operating blind and had no idea of the level of waste in their system. Use of a flow meter has opened their eyes to new potential and the resulting improvements have saved significant operating costs.