“Jurassic Park,” Michael Crichton’s 1990 novel about a theme park full of genetically engineered dinosaurs, circles around one central theme — control. In fact, there are literally nine chapters titled “Control,” and most of those chapters follow the brilliant, chain-smoking systems engineer John Arnold as he ravenously tries to restore the control systems after a catastrophic collapse.

Now, you might be wondering what on earth this has to do with compressed air.

Simple: If you don’t have control systems in place, you are letting your compressed air system run amok — essentially the equivalent to letting a tyrannosaur romp freely through a resort. One effective way of controlling the pressure of your compressed air system is to use a flow controller. The ConservAIR® S-Series Intermediate Control® (I/C) can help facility managers understand and manage plant pressure to reduce their facility’s overall pressure and generate substantive energy savings.

For starters, the ConservAIR I/C is a mechanically run flow controller. It comprises multiple, similarly sized valves that work in parallel to split air moving through a system. A relatively simple pressure regulator controls those valves. It reacts almost instantaneously to changes in air demand and adjusts the valves accordingly, allowing the device to maintain a pressure set point to within ±1 psi. 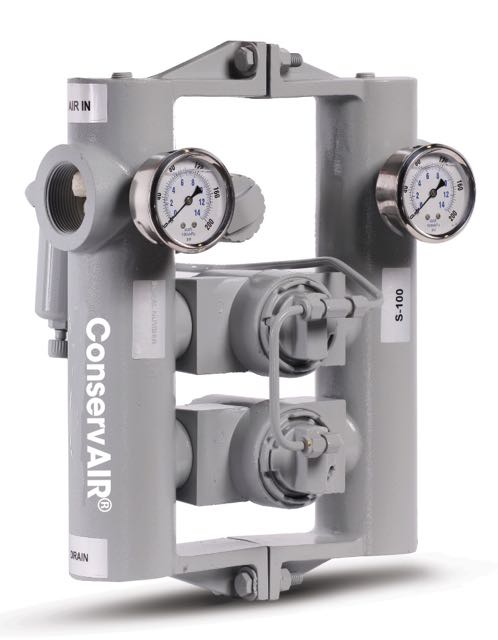 The ConservAIR flow controller can maintain that tight pressure set point due in large part to the parallel orientation of multiple control valves. The valve configuration — which consists of several smaller valves that work in unison — reacts much faster to changes in air pressure than other flow controllers that use larger single butterfly valves.

When I spoke with Joe Fresch, VP of Pneumatech North America and Regional Sales Manager of Chicago Pneumatic, he helped explain why the multiple parallel configuration reacts so quickly to air pressure changes:

“If you can imagine a single butterfly valve trying to oscillate to make sure an 85-psi set point doesn’t move, it’ll sometimes get up to 87 or 88, and sometimes down to 82 or 81 — all while trying to maintain 85 psi,” he explained. “Because we are splitting air between smaller, parallel valves, we have very little valve travel, and that allows just the right amount of air to be released from storage to maintain that set point.”

In other words, it takes a lot longer to open or close a single large valve than it does to close multiple smaller valves, so the adjustments to air pressure take place much quicker.

According to Fresch, the ConservAIR I/C “gets as much speed if not more with the multiple parallels than one would with one sophisticated PID controller and a single butterfly valve.”

To learn more about the real-life application of the device, I spoke with Don Dyck, Owner and Operator of Compressed Air Performance Specialists (CAPS), Inc., a compressed air consultancy located in Alberta, Canada. Don has 30 years of experience in the compressed air industry. While his company is not affiliated with any OEM, Don uses ConservAIR controllers in every project.

“When I use flow controllers, they are there for two specific reasons,” Don explained. “They afford me the ability to control the downstream pressure into the plant and maintain it on a consistent basis. Without that management, then you are seeing a lot of fluctuations downstream into your plant production area, which affects performance on point-of-use equipment. On the front end, or prior to the flow controller, it affords me the capability to precisely control the compressors.”

In a correctly designed system (Figure 2), a flow controller acts as a buffer between the supply side and the demand side, effectively separating the air compressor and the point-of-use equipment. With the unit in place, the plant pressure can be stabilized, allowing for a consistent supply of compressed air to the end users. Additionally, the air compressor is no longer directly exposed to fluctuations in demand, and is simply tasked with feeding a receiver tank. This allows for greater efficiency, as a compressor no longer has to turn on or unload with every change in pressure. 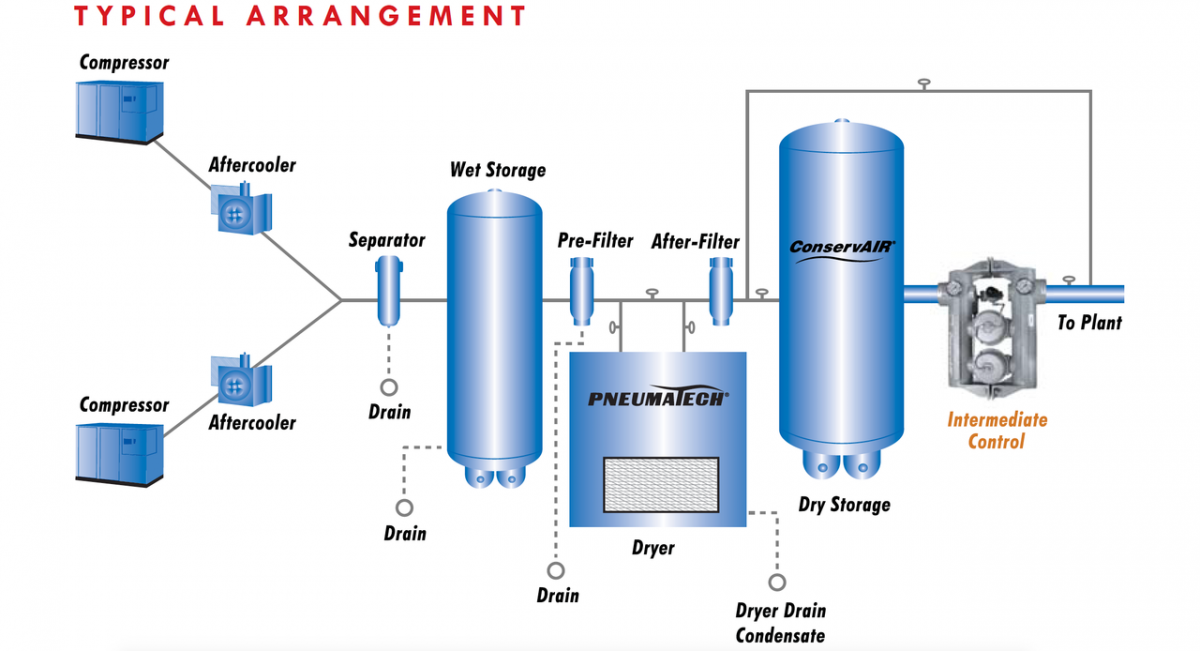 Figure 2: The dry storage and the I/C act as a buffer between the supply side (left) and the rest of the plant.

The bottom line is that the ability to stabilize plant air pressure and precisely control the operation of the supply side (air compressor) can be tremendously beneficial — in regards to both process reliability and energy efficiency.

There is one important caveat to using a flow controller that needs to be thoroughly explained. You cannot simply integrate one into a compressed air system and expect it to generate energy savings. The device is dependant on a well thought-out system design, and — most importantly — storage.

“You can’t just put that I/C into it and expect that you’re going to save tens of thousands of dollars.” Don explained. “It will help, but it has to have the tools to be able to perform at its optimum level.”

In order to operate effectively, a flow controller needs to work in conjunction with a properly sized receiver tank. The controller reacts to any surge in pressure in the facility, and supplies air from a receiver tank accordingly. Consequently, all the air compressor has to do is fill the receiver tank.

At atmospheric pressure, there are approximately 7.4 gallons of air in one cubic foot, so a 400-gallon receiver tank holds about 53.47 cubic feet of air at atmospheric pressure. By pressurizing the air to 150 psi, that same tank can hold approximately 545 cubic feet. If the plant only needs 100-psi pressure, and the tank is storing 545 cubic feet, there is a lot of extra air in the tank to do work. The I/C can then efficiently and intelligently allocate that extra air.

“There are two components of storage,” according to Fresch. “There is a receiver tank that adds a certain number of gallons of storage, and then there is a pressure differential imparted across the tank by the I/C. If you go into that tank at 100 psi and you come out at 100 psi, you really don’t have true storage.”

Unsurprisingly, pressure differential can generate a lot of speculation, because it can be easily confused with pressure drop — or inefficiency in a system that might be caused by an air dryer, a filter or leaks. If you have been in the compressed air industry for even a short time, then you know that pressure drop is bad, and can be very energy intensive.

To better understand the difference between pressure differential and pressure drop, I spoke with Ed Maxwell, a partner and independent sales representative at Eastern States Associates, Inc., with 40 years of experience in the compressed air industry.

“That is the biggest hurdle to get people to understand,” Maxwell told me. “If an air compressor generates 125 psi of air, and it goes through the dryer and it loses 5 psi because of the dryer, that’s a loss of efficiency in the system. When we say we are going to take 150 psi and reduce it to 110 psi, people think of pressure drop.”

In actuality, creating a pressure differential through the receiver tank creates system efficiency. By lowering the pressure coming out of the tank, you are creating storage, and the flow controller can then efficiently manage that storage. 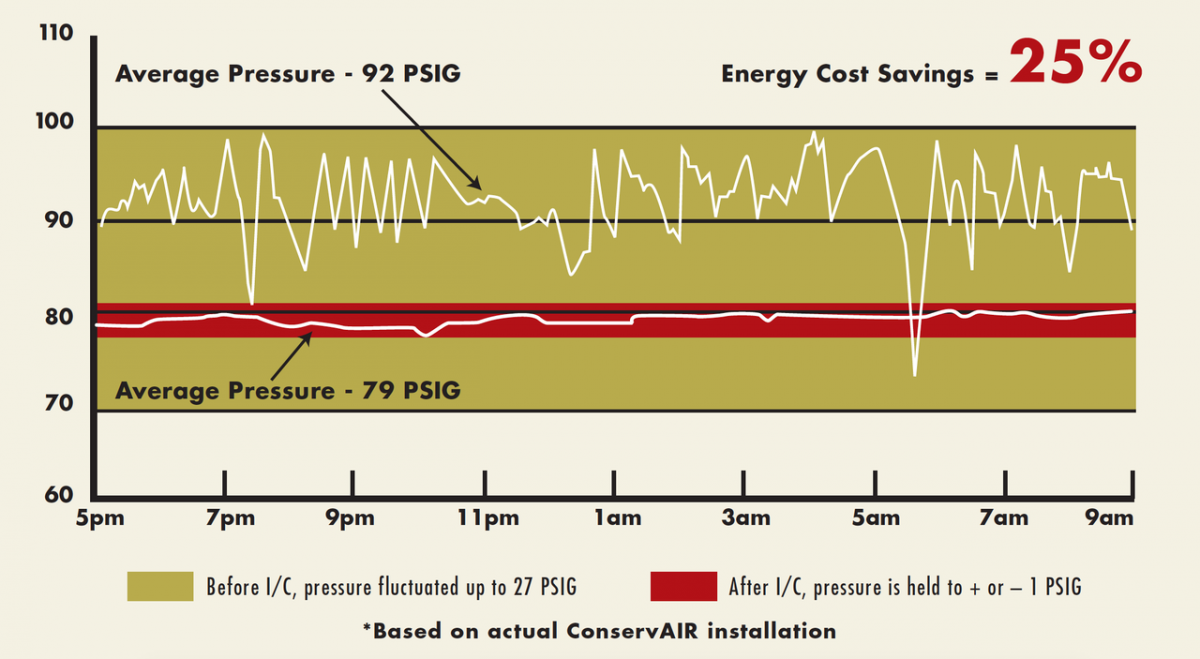 Figure 3: Installing an I/C can stabilize average system pressure and save on energy costs.

Put simply, pressure drop is an unintentional loss in system pressure that can wreak havoc on energy efficiency. Pressure differential is an intentional, controlled lowering of system pressure at the storage tank, which helps to maintain a constant pressure set point and lets you run your compressors more efficiently.

“Lower the amount of pressure you are feeding into the system, and you increase system efficiency,” Fresch said. “You feed all of the points of use with less air, lowering what we call artificial demand.”

Once a person understands the logic behind a flow controller, the final challenge is determining the pressure set point. This process requires vigilance on the part of facility management, and it can take a couple of weeks to iron out. With the potential energy savings, however, it is well worth the effort.

“People don’t know what their equipment operates at or requires — all they know is what they’ve been using,” Maxwell explained. “If you think your equipment needs 100 pounds of air, we’re going to try to make it run at 95. If you’re happy with how it runs at 95, then we’re going to keep it at 95, and the company is going to save a tremendous amount of money in energy.”

To the put the capabilities of the ConservAIR into context, Don spoke with me about several applications in which he used the device to improve compressed air system efficiency. The first facility we discussed was a major food processing plant in Alberta, Canada. The plant had two 150-hp air compressors running at nearly full load, and the facility management was adamant about their need to run both.

By determining how much air pressure the facility actually needed for its applications, Don was able to use multiple flow controllers and “zone” them throughout the facility. That meant that for each point of use, he could implement an I/C along with properly sized storage, and regulate the air pressure specifically for each application.

Using this method, the facility was able to completely shut off one of the 150-hp compressors in less than a year. Don was even able to get the other compressor to consume the same amount of energy as a 100-hp machine, thanks in large part to flow controllers with air receiver storage.

“The system was working so well that they actually had two major plant expansions off of one 150-compressor,” Don explained when discussing the job. “They didn’t have to add on, they took the spare 150-hp and started producing the plant’s own nitrogen with it, which saved them tons of money in contract nitrogen costs.”

During our discussion, Don described another job at a major food processing plant in Ontario, Canada. This facility had an improperly installed flow controller that was causing huge disruptions in plant operation. In his system assessment, Don identified a problem that was literally sucking air from other points of use.

“It was because this particular manufacturer’s so-called mass flow pressure controller actually could allow air to flow backwards,” Don said. “So in other words, instead of going inlet to the outlet, it could go outlet to the inlet to satisfy air demand that was actually upstream of it. That air demand would literally draw all of the compressed air of the main piping system from the production floor.”

Unfortunately, the management’s initial answer was to add more air compressors. This left them with an inefficient bank of compressors, including a 150-hp, a 300-hp and a 500-hp machine.

A nitrogen generation system positioned upstream from the controller was consuming air from the rest of the facility. To solve the problem, Don separated the facility’s compressed air system into two manageable systems by using flow controllers with air receiver storage.

First, he dedicated the 150-hp air compressor to the twin-tower nitrogen generation station. That system incorporated a 2560 gallon receiver and a ConservAIR I/C. Don then took the 300-hp air compressor and dedicated it to the rest of the facility, utilizing the same configuration. The 500-hp machine, which was rarely used in the first place, was left with absolutely nothing to do.

No compressed air system is perfect, and facilities always change, making it all the more important to have a control system in place. That way, you can monitor and adjust to evolving demands, keeping your compressed air system operating as efficiently as possible. The ConservAIR I/C can be an incredibly effective tool for controlling the dinosaur that is your compressed air system. Used properly, and in conjunction with other parts of the system, it can help tame your compressed air demand and reduce waste — generating significant energy savings in the process. And, fortunately for you, there are no velociraptors preventing you from getting your system under control.