Manufacturers familiar with the U.S. Environmental Protection Agency (EPA) ENERGY STAR® Energy Treasure Hunts initiative know it’s a great way to save energy and natural resources – as long as it’s done right – which is why some are turning to perhaps their best asset to achieve success: their unionized workforce.

Such is the case with energy treasure hunts led by the IUE-CWA. The IUE is industrial division of the Communication Workers of America labor union. The IUE represents over 45,000 manufacturing and industrial workers in a wide range of industries including automotive, aerospace, furniture, and appliances. 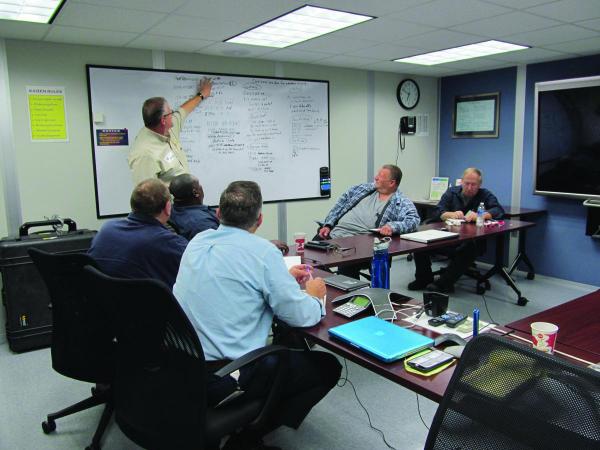 IUE-CWA Energy Treasure Hunt Coordinator Bill Draves said companies who don’t already engage union employees have come to value how someone working on the plant floor can contribute to a successful effort. Equally important is how production employees appreciate the opportunity to make a difference.

“After the process of an energy treasure hunt gets going employees who work on the floor often say, ‘Oh man. There’s a lot of money here to be saved.’ They soon realize they’re empowered to do something about it and take part in a project that contributes to everyone’s success. Their involvement in energy savings, as with others throughout a company, is critical.”

Overcoming the ‘Fear Factor’ to Save Energy

Since 2011, the energy treasure hunt team at IUE-CWA has worked side by side with manufacturer after manufacturer to help implement successful treasure hunts and identify annual energy savings opportunities ranging from \$50,000 to \$500,000 at each operation.

While the concept of using union members to conduct energy treasure hunts is usually welcomed with open arms there are some companies who are initially hesitant to do so, Draves said.

“The fear factor is that it’s a union project, which stems from false expectations and the history of unions and management relationships at different companies during different times,” he said. “But after we get the process going, decision-makers start to see there’s nothing behind it except to make the company more profitable. That’s when the proverbial lightbulb goes on and they start to say, ‘Wait a minute. This isn’t fairytale stuff. It’s real.’ ’’

There are also times, Draves said, when the lightbulb goes on immediately after the IUE-CWA team first explains the purpose of the initiative and how it works.

“We like to make it clear, we’re here to help. We’re looking to make the plant better and to save money,” he said. “Our mission is to add to the bottom line of the plant and we’re going to help preserve jobs. That’s the premise.”

The IUE-CWA energy treasure hunt program started when the team began working with the Environmental Defense Fund (EDF) and Bruce Bremer of Bremer Energy on a pilot program at a manufacturer in Ohio.

On the project, the IUE-CWA team worked hand in hand with Bremer, a pioneer in energy treasure hunts who is credited with leading the development of the foundation for the program. To read more about Bremer and the genesis of energy treasure hunts, visit www.airbestpractices.com/energy-manager/corporate-sustainability-programs/culture-building-energy-star%C2%AE-energy-treasure-hunts.

IUE-CWA Lead Trainer Ken Hess said the pilot project pointed to an excellent opportunity for both the union and member companies.

“The first pilot project was an eye-opener,” Hess said. “What caught my attention was the ability to identify and quantify wasted energy and put it into dollars and cents that everyone can understand.”

Hess said most plants the IUE-CWA team partners with already understand how compressed air represents low-hanging fruit for energy savings. But there’s much more to it, he said.

“Compressed air is kind of a no-brainer as far as energy savings, but most don’t understand the cost behind it. When they do, it’s one of those ah-ha moments. But you can’t just focus on compressed air since there’s many more opportunities with different systems,” Hess said.

After completing the initial pilot phase with the EDF, the IUE-CWA committed program resources to conduct energy treasure hunts on a regular basis at small- to mid-size manufacturing plants who employ IUE-CWA members. Today, the IUE-CWA energy treasure hunt team is comprised of Draves, Hess, and two other IUE-CWA members, Sean Diglaw and Jon Parkhurst.

The overriding goal of the program, which is funded by union dues, is to teach hourly workers and decision-makers the many easy ways to identify no- and low-cost energy savings opportunities with immediate or short-term ROI and implement successful initiatives. Opportunities for energy efficiency are found in operational areas and all plant utilities including compressed air, chilled water, water, steam, and lighting, as well as electricity and natural gas.

The IUE-CWA team uses a variety of proven and unique methods and techniques to ensure successful launches of energy treasure hunts. One technique is to set clear expectations, said Draves.

“The engineering manager or plant manager we’re talking with is a person who wears many hats,” he said. “The first thing they often think of when we talk to them is, ‘Oh, Good gosh. I can’t take on more work.’ But then we make our purpose clear, which is to take a lot of that extra work out of it for them.”

The team also stresses the ease of which energy treasure hunts are conducted and the free tools available, such as the EPA’s Detail Sheet, which is an Excel spreadsheet designed to help easily quantify energy-savings opportunities.

Most IUE-CWA led energy treasure hunts start on a Saturday or Sunday with a walk-through audit of equipment and processes when production and energy use is lowest. The walk-through identifies areas of opportunity. The team then follows the established process for energy treasure hunts, including a three-day workshop and subsequent recommendations and various follow-up activities.

Draves said the importance of involving cross-functional teams in energy treasure hunts cannot be understated. He said inclusion of people who work in production day in and day out is especially important.

“The guy on the floor sees things at a granular level. He knows how production flows in his department as good if not better than anybody. He’s the guy who hears the compressed air leak hissing, or questions why the plant doesn’t shut down a machine when it’s not used. His participation is invaluable,” he said.

Draves said involving managers, maintenance staff and skilled tradesmen throughout any given plant is equally vital.

“At the managerial level, they understand the dollars and cents of energy and the importance of energy-savings from a 10,0000-foot view,” he said. “At the same time, the maintenance and skilled trade people see things managers never see that need to be addressed. Everyone sees the plant and the energy use through a different set of eyes.”

The IUE-CWA team also works to instill other best practices for successful energy treasure hunts. Examples include sharing realistic dollar figures for energy savings with decision-makers, rather than overpromising; taking a few minutes or more to discuss energy-savings opportunities during already-scheduled team meetings, such as safety or Kaizen meetings; sharing data in relatable terms, such as saving enough water to fill an Olympic-sized pool; and thinking twice about purchasing equipment based on the lowest price without factoring in its energy efficiency rating.

Another proven technique is to embed the concept of energy treasure hunts in the company culture at every level to keep energy savings top-of mind and to ensure everyone at the plant takes ownership in it.

“The plant manager might be able to make the program run really well,” Draves said. “But if that person leaves the position for any reason it might not have the legs to continue. That’s why having a good cross-section of people on the team is key. They’ll keep it going as long as they’re getting results.”

Draves and Hess said they are seeing more manufacturers becoming aware of the need to adopt initiatives aimed at saving energy and natural resources. A priority for the IUE-CWA energy treasure hunt team is to spread the word about the value of sustainability best practices.

All photos courtesy of IUE-CWA.