PROTON Tanjung Malim Sdn Bhd (PTMSB) is an automotive manufacturing plant located at PROTON City, a ten minute drive from the Tanjung Malim town of Perak, Malaysia. It is one of three manufacturing facilities owned and operated by Perusahaan Otomobil Nasional Sdn. Bhd. (PROTON) with a production capacity of 150,000 cars per annum.

Measurements were taken as a result of PTMSB’s adoption of the IS0 50001 Energy Management System (EnMS) tool from United Nations Industrial Development Organization (UNIDO), which revealed annual electricity consumption from compressed air as the third largest Significant Energy User (SEU). This accounts to about 12 GWh or 18 percent of 66 GWh total facility annual electricity consumption  (Figure 2).

As a result of this insight, the company’s management set a goal to optimize the compressed air system by reducing compressed air leaks, artificial demands, and inappropriate uses in the plant.

Compressed air optimization measures adopted by PTMSB have reduced the consumption of compressed air by 31 percent resulting in savings of about 3,761,000 kWh per year in energy consumption.  The monetary savings are MYR 1,090,627 per year ($255,000 USD). The CO2 reduction is estimated at 2,735 ton per year. 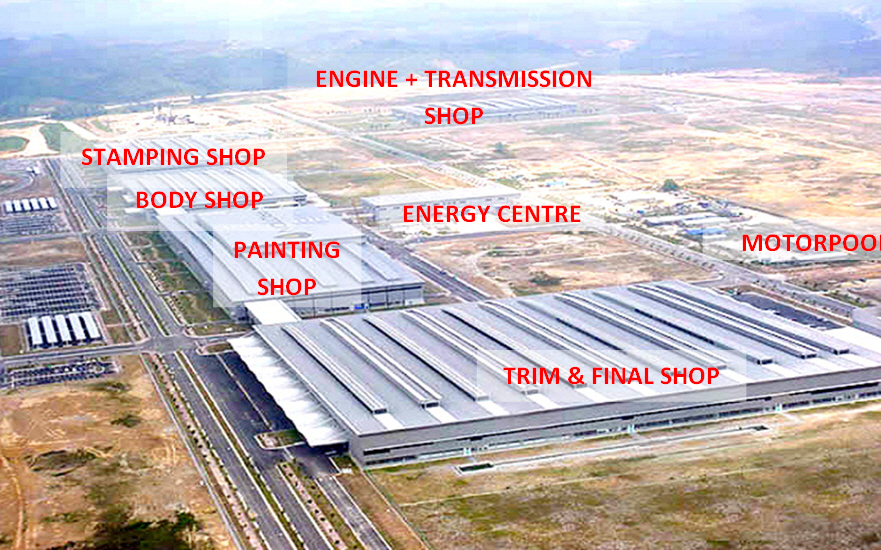 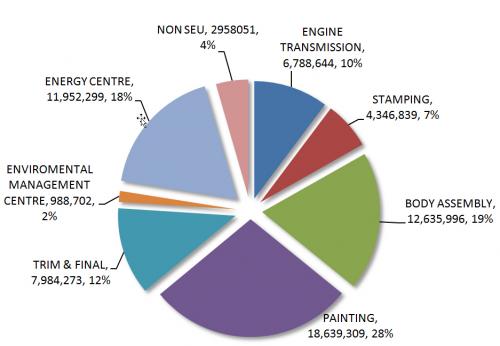 Overview of Air Compressors in PTMSB

There are eight large water-cooled centrifugal air compressors located in the Energy Centre of PTMSB. These units are not connected to any type of control system and are manually operated on a schedule controlled by the system operators.

The PTMSB plant maintenance & services set specific goals in addressing their compressed air system. They include:

CASO activities that were carried out, are as follows:

Results of Implementation of CASO activities

Figure 4 shows that the efforts of the energy management team caused a progressively decreasing reduction in energy consumption at the Energy Centre. 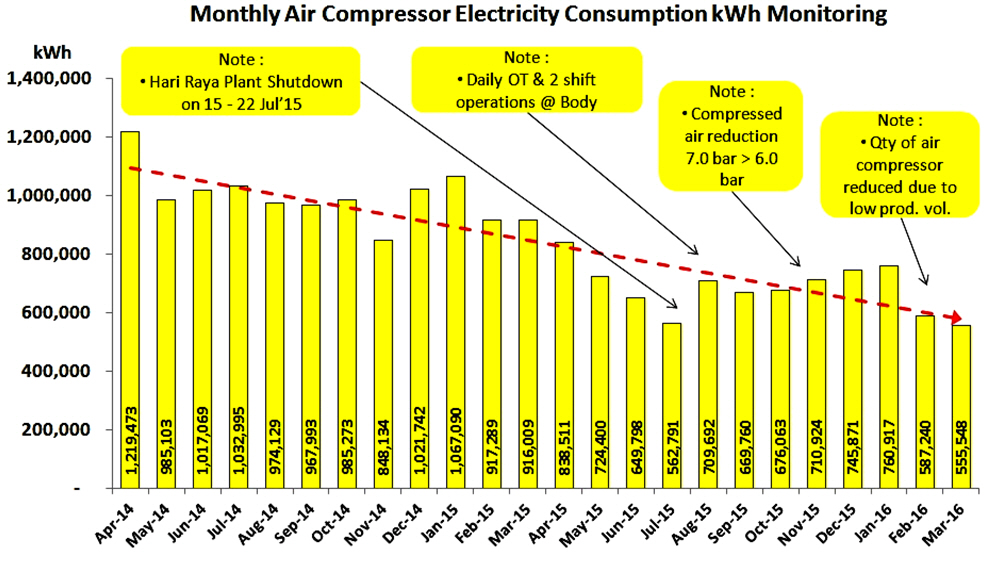 As part of the UNIDO training in Energy Management, PTMSB staff learned that Energy Conservation is the first step towards Energy Efficiency, and from past studies it was proven that behaviour changes of people and reducing wastage in current practices can lead to 10% or more savings.

Hence, PTMSB launched the PROTON Green Policy and rolled out awareness campaign to all workers on conserving energy. PTMSB trained their staff to inform maintenance team whenever they find any air leaks nearby their work areas. The maintenance team also organized dedicated sub-groups to aggressively find all leaks and fix compressed air leaks found in all areas. 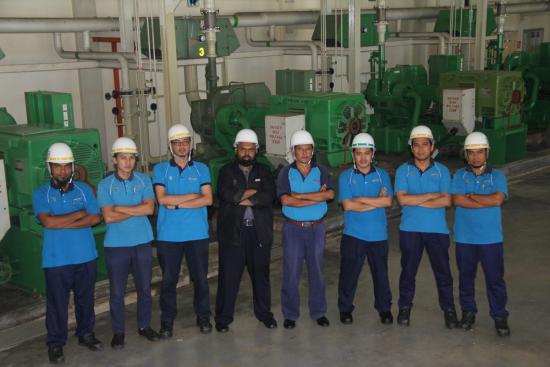 Figure 5: The PTMSB Maintenance Staff are serious about reducing waste!

Furthermore, by running only three air compressors during day shifts instead of five units, and smaller total capacity during night shift, PTMSB managed to achieve better compressed air production efficiency and reduced blow-off.  Add to this the benefit of reduced maintenance costs due to lower number of operating hours. 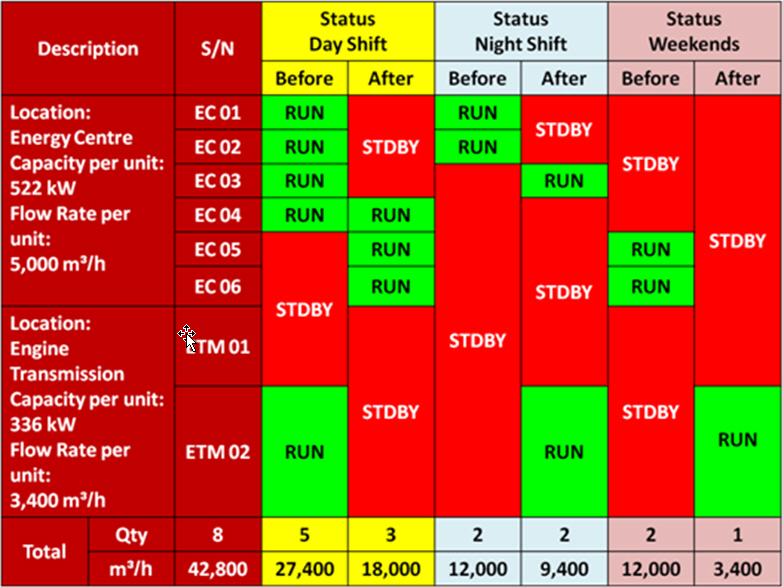 PTMSB also studied the demand side requirements for the compressed air pressure. Initially, the air compressors at the Energy Centre were supplying compressed air at a pressure of 7 bar (100 psi) to the whole plant. It was thought this level could be reduced. However, when reducing the supply pressure from 7 bar to 6 bar (100 to 87 psi), it was found that some pneumatic machines in the Painting shop and Trim & Final shop started to malfunction, affecting the quality of the painting process due to low pressure events. Some machines in the two production shops required higher pressure than other production shops. In order to save energy for the air compressors, PTMSB purchased and installed compressed air powered boosters that compress 6 bar compressed air to the required 7 to 9 bar pressure for the Painting shop, spray robots and Trim & Final shop’s pneumatic manipulators.

This initiative resulted in PTMSB being able to reduce the overall header pressure in the plant by 1 bar (14.5 psi).  The reduced pressure and the changes as a result of other energy conservation measures reduced the flow of compressed air to the point where the number of running centrifugal air compressors could be reduced.  The system was reconfigured so that the air compressors can run based on actual demand of plant.

PTMSB also identified the usage of vortex coolers which have been using compressed air at a flow rate of 6,000 m³/h (3,500 cfm) to cool down accumulated heat from the circuitries inside the control panels. The plant engineers came up with a replacement cooling method, using a Force Convection Fan (see the “Control Panel Cooling” article in the July 2016 Issue of Compressed Air Best Practices Magazine) to cool down the control panel instead of using a vortex cooler powered by compressed air.

The impact was that PTMSB could shut down one unit of 522kW air compressor by improving the control panel cooling using the Forced Convection Fan method which does not require compressed air to cool the panels. Management asked for a detailed financial analysis on the return of investment (ROI) and technical evaluation to be conducted before deciding to go for a full scale replacement of all vortex coolers in the plant by Forced Convection Fan. Upon the completion of the study, it was found the vortex cooler, for normal control panels, could be replaced with a low-cost forced convection fan cooling system. This concept will use hi–delivery of clean ambient air at 32˚C forced entry into the control Panel at 235CFM and exit at 210CFM. This will keep a positive pressure to eliminate dust entry and maintain the temperature inside the control panel at 34±2˚C.  It was estimated the electricity bill to operate a Forced Convection Fan is around RM14 per Month ($3 USD per month). Furthermore, the replacement of the vortex cooler by the Forced Convection Fan method also provided the added benefit such as a reduction of noise providing a quiet work environment to workers.

For the High Inductive Distribution (HID) panels, we required higher cooling capacity above the cooling capacity generated by the Forced Convection Fan. Hence, PTMSB decided to install industrial air conditioning systems for all the HID panels in the plant because these HID panels produce large amounts of heat and the electronic components are vulnerable to overheating.

In short, the important element contributing to the success of the Compressed Air System Optimization (CASO) project at PTMSB in reducing both energy consumption of 3,760,784 kWh and monetary savings of MYR 1,090,627 was the continuous support extended by the UNIDO Energy Management System (EnMS) and System Optimisation (SO) program operating in Malaysia, coordinated by Ms. Kaveta Chelliah. With the training and guidance provided by UNIDO EnMS, Mr. Bill Meffert and Erik Gudbjerg; and CASO international trainers, Ron Marshall and Bo Kuraa, with local experts, Ahmad Zafuan and Ch’ng Eng Yong, PTMSB Energy Manager, En. Azeem and other staff were able to implement the EnMS tools to monitor and track the plant’s electricity costs through a proper method in accordance to the ISO 50001 system. The EnMS system also helped in measuring and verifying savings made through the CASO project and other various initiatives carried out in the plant.

Note from Ron Marshall: The UNIDO CASO awareness program was conceived and written using the Compressed Air Challenge's training materials and methods as guidance.  This successful effort at PTMSB, still not yet complete, is a shining example of what awareness and focused efforts can achieve!  The physics of compressed air knows no international boundaries.  What works to save money in Malaysia will work in North America.

For more information about the Compressed Air Challenge®, contact info@compressedairchallenge.org.