As end users become more energy conscious, plant personnel and operators have responded by looking at ways to reduce the kwh’s of their air compressors. The purpose of this article is to show there isn’t always a proportionally linear relationship between what happens with flow reductions on the demand side of a compressed air system - and what happens with the energy consumption in the air compressor room. Optimizing an entire compressed air system requires precise knowledge of the supply side, how compressed air is used in the process itself and how those two relate together.

Twenty years ago, Compressed Air Consultants, Inc. was formed to focus on some industries where compressed air demand-side improvements delivered significant results. As our skills in these industries developed, we became aware of the common use of many erroneous economic justifications for demand- side compressed air system improvements.

Some of these “improvements” are made on the basis of an incorrect calculation for the payback while others are just made off the cuff without an understanding of the cost impact. There are other cases where clients miss opportunities through benign ignorance. This article explores the issue in greater detail. The four basic types of mistakes include:

Supply Side Misconceptions – “a cfm saved is a cfm earned”

The misconception associated with the compressed air supply side is the assumption that “a cfm saved is a cfm earned.” This assumption of a proportionally linear relationship ignores the impact, on air compressor energy savings, realized by the type of existing air compressor controls and where in the control band the machine is running. Suppliers of point of use demand-reduction equipment tend to be guilty of this mistake. They might go to an informative website like the DOE’s Energy Tips and read that compressed air costs 18-30 cents per 1000 ft3 of air. They then extrapolate that reducing 10 cfm at 10 cents/1000 ft 3 means they will save \$1300 per year. If the plant requires a 2-year payback, they think they have \$650 to spend to fix it.  And they’d be wrong.

For most control systems, the energy reduction is linear but not always proportional to the cfm reduction.  In the case of a load no-load air compressor, the theoretical best is 70% so that the \$1300 savings is actually \$910.  In the case of a modulating screw compressor, the savings is 30% or \$390.  These two examples would not have a two-year payback for a \$650 solution.

The implication of this is that demand side improvements should not be made until the air compressor control strategy is completed if return on investment is the highest priority. It’s the low hanging fruit that often allows one to go after the higher hanging fruit which ultimately reduces the overall operating costs the most.

With all due respect to some articles in this fine magazine, “common best practice demand-reduction projects” often aren’t as effective as a precise understanding of the application and the process. It’s never good to use compressed air, right? Actually from a Return-on-Investment perspective, sometimes compressed air is the best solution.

Errors using “common best practice demand-reduction projects” often occur due to implementation without the calculation of the correct actual cost to implement. Panel cooler replacements often fall into this category. We’ve seen recommendations to eliminate the use of panel coolers because the auditor/salesperson thought that any reduction of compressed air was a “Best Practice”. For example, the panel cooler below consumes 35 cfm of air. Was it the right recommendation? To know the answer, you’d have to know: 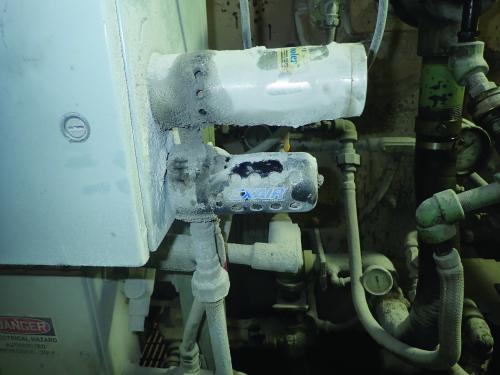 Filtration issues on a panel cooler

Another error we see involves purchasing and installing new demand-reduction equipment, rather than simply fixing an incorrect system set-up. Assessments of existing process equipment demonstrate an inadequate understanding of the existing equipment and how it can run. One product that has entered the market is a new type of pulsejet for dust collectors. It shows great promise in that it has quite a few desirable features associated with it.  However, some of the justifications for the technology suggested that the new supplier didn’t understand how the old technology should be set up. Those evaluations assumed that the existing set up was correct in terms of pulse duration and interval. They were not. When the current air consumption was estimated, no accounting was made for the fact that those settings on the existing pulsejets could be altered without impacting the performance of the dust collector. Again, there may have been a positive ROI for the upgrade, but the user couldn’t make an accurate informed decision with the information provided to him.

A third area where the assessment of existing equipment can go wrong pertains to the duty cycle of an application within a process. Understanding the duty cycle (or not) keeps coming up with the calculations used when analyzing the use of compressed air for blow-off vs. blower air. The picture below shows the inside of a hood where compressed air is used to remove dust from a bag of cement.

Blower air can handle this task more than adequately but is not always justifiable. The informed recommendation involves understanding not only the duty cycle within the operation of the facility but the duty cycle within the process itself.  In this case, a proximity switch can be used to determine where the bag is located and the air can be turned on and off in between bags. This makes the calculation more difficult but more accurate. 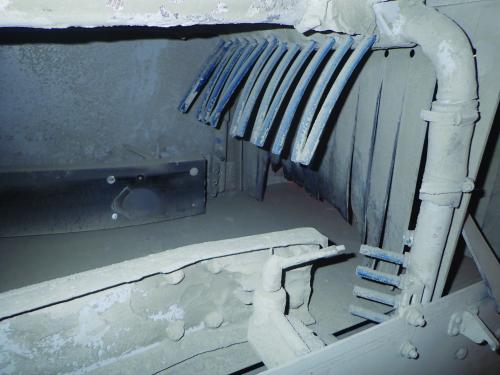 The inside of a hood where compressed air is used to blow-off dust from a bag of cement.

Another problem is when a customer doesn’t understand all of the options at their disposal when it comes to a demand side improvement. If done through ignorance, then it is understandable even though it shows a lack of expertise. If it is done purposefully, which does happen more than it should, then it is irresponsible. In some cases, capital and operating costs can increase when there were better options available.

One example of a customer and a salesman not knowing their options involved the purchase of 10 bar air compressors to feed some air cannons. The plant had problems clearing blockages in the process so the decision was made to supply the existing air cannons with higher pressure air to impact the process with more force. What no one realized is that this €75,000 investment in 10 bar air compressors would just about double the cost of this application. No one considered whether there were other options.

What were their options?

Benign Ignorance – The Cost of Compression

Benign ignorance is when a lack of understanding leads to an excess cost. The plant has an opportunity but doesn’t realize it. This often happens when an operator assumes that all compressed air costs the same. One example where the design engineer caused a cost increase is a common one when it comes to barrier air for instrumentation.

In this picture, two ultraviolet detectors use compressed air to keep the sight glasses clear and help keep the lenses cool. The cost of the air was \$2500 per year per instrument. 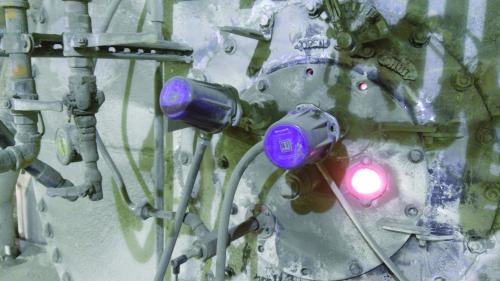 Two ultraviolet detectors use compressed air to keep the sight glasses clear and help keep the lenses cool. The cost of the air was \$2500 per year per instrument.

The purpose of this article is to show there isn’t a proportionally linear relationship between what happens on the demand side of a compressed air system and what happens with the energy consumption of the air compressor room. In many industries, there are opportunities and pitfalls when it comes to cost reduction on the demand side. Properly optimizing an entire system requires knowledge of the compressed air supply side and the process equipment itself and how those two relate together.

Visit our Webinar Archives to listen to expert presentations on Compressed Air Measurement at https://www.airbestpractices.com/magazine/webinars.