A premium whiskey distillery was seeking to renew their compressed air system and meet their corporate mandate in making their production facility more efficient. The first step on the road to improvement was having their compressed air system assessed. This article discusses some of the findings of the system study, which saved significant energy, improved system reliability, and captured a significant utility incentive to help with the study costs and the cost of a new compressor.

Figure 1. Pressure and amp profiles showed no significant pressure loss, other than the pressure differential caused by orifice plates deliberately placed on storage receivers.  The amp profiles showed that higher than desired flow caused by air dryer cooling purge caused  a second compressor to be required to hold pressure. Click to enlarge.

The facility had installed compressed air capacity consisting of three non-lubricated screw compressors sized 110 kW, 90 kW (air cooled) and 160 kW (older spare). These compressors were independently controlled with only one normally operating to feed plant requirements. Occasionally a second compressor was required to feed peak flows. The system has a heated blower desiccant dryer with dew point control to condition the air, with associated filters.

The compressed air is directed throughout the plant through a radial feed of steel piping. One medium sized 500-gallon storage receiver is located in the compressor room area as dry control storage.

Installed data loggers showed minimal pressure loss across the piping system. Most of the pressure loss was across the drying and filtering system and/or across restrictor plates deliberately designed into the system to reduce high transient flows caused by some high flow end uses.

The amp logging showed that the compressors were running in load/unload mode and some had significant unloaded run time, reducing system efficiency. The captured data also showed when the air dryer cooling purge operated a second compressor was required.

A survey of the demand side of the system was done including leakage. A total of 49 leakage points were found, estimated at 50 cfm. Various compressed air uses that could be classed as potentially inappropriate uses were found including star seal blowing, bin vibrators, poorly adjusted dust collectors, compressed air vacuum, air horn ventilators, and fume blowing.

The shape of the compressed air flow demand curve during production (approximated by the red line Figure 1) captured over a one-week period at the end of the data logging can be seen. The pressure profile shows good pressure regulation when only one compressor is required.  Dips in pressure can be seen on occasion when two compressors are required. The profile shows a somewhat flat pattern during production activities with higher peak flows just after the air dryer heating cycle. These peaks are caused by the dryer cooling cycle. Heated blower style dryers don’t use compressed air for purging the desiccant, however, after the heated regenerating cycle an amount of dried compressed air is expanded to atmosphere as it passes through the hot desiccant bed. The typical flow for this cooling cycle is about 8 percent of the nameplate rating of the dryer. The actual purge for this dryer was found to be much higher.

Additional peak flows are somewhat random, associated with clearing of liquid product lines after transfer from production areas to storage vessels. The dryer associated peaks, with coincident line cleaning, required two compressors, on occasion, to support plant pressure, although the second unit barely loads In this way line clearing and the dryer heater contribute to the plant peak electrical demand.

This profile showed that the air dryer was consuming higher than normal cooling purge, if something could be done about this, the requirement for two compressors running would be minimal, saving on peak demand. Savings could also be gained if leakage and inappropriate use could be reduced.

The existing compressors were running in load/unload mode with coordinated cascaded pressure bands. With this type of operation there are periods of time where a compressor is running, consuming power, but producing no compressed air. The area of inefficiency, where the compressor runs unloaded, is identified in light red highlight in Figure 3, this is a “load duration” profile of C3 compressor amp data points sorted highest to lowest to form a histogram.  This area of inefficiency can be addressed by choosing a compressor with a control mode that doesn’t have unloaded run time (VSD operation).

It should be noted, further to this, due to compressor cycling, there is a period of time where the compressor is in transition between loaded and unloaded, or reverse indicated with the green highlight. This can also be addressed by eliminating compressor cycles using VSD mode. 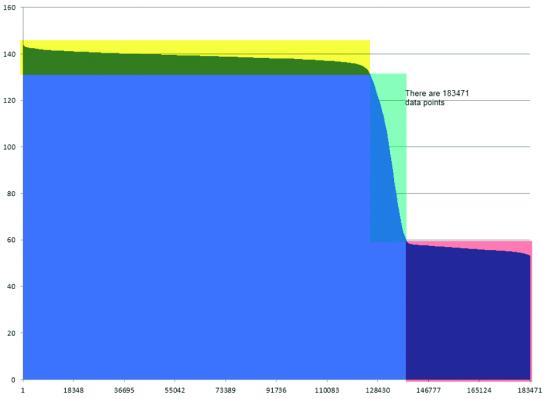 And, in addition, there is extra power consumed by the compressor if it runs at higher pressure than required by the plant, this is indicated with the yellow highlight. This can be addressed by reducing the compressor discharge pressure by adjustment. VSD compressors typically run at a fixed target setpoint, rather than a “sawtooth” pattern, resulting in lower average discharge pressure if the target is set to the previous “load” setpoint of the original compressor. This chart, and similar ones for the other compressors can be used to determine projected savings.

The analysis of the data collected showed the following baseline: 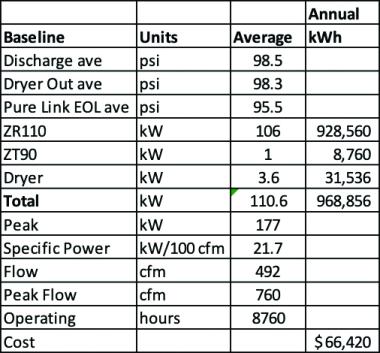 The readings and observations during the measurement period showed the compressed air system was producing air at fair efficiency (21.7 kW/100 cfm). Problems with the air dryer cooling purge flow, higher than needed discharge pressure, some small leakage and drainage issues, and some inappropriate end uses were causing higher than desired operating costs and occasional pressure issues.

A thorough look at the demand side turned up various potentially inappropriate uses, these were assessed and costed out in Figure 4. Figure 5 shows a typical compressed air powered vacuum that has low duty cycle but can contribute to starting a second compressor.  A typical dust collector manifold arrangement is shown in Figure 6 with a significant leak identified. Various random blast valve failures, one caught during verification logging, occasionally cause low pressure events in the plant (shown in Figure 8).

Some end uses associated with the handling of grain in the facility cooker area were identified, continuous blowing was being used for cleaning of star seals and to promote the flow of grain within chutes. One blowing application (Figure 7) was found to be consuming a surprising 15% of the total plant compressed air flow.

Figure 4. Various potentially inappropriate uses were found in the plant and some priorities (highlighted) identified. 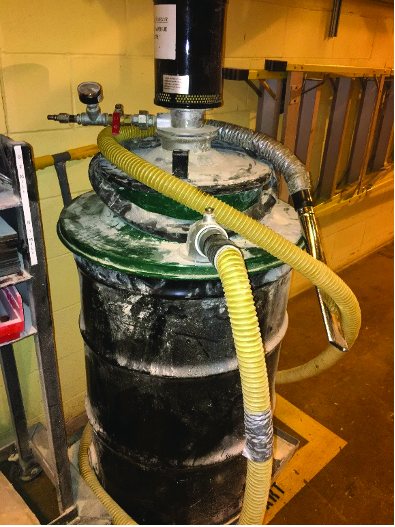 Figure 5. Compressed air vacuums like this can cause high peak demand which trigger an additional compressor to start. 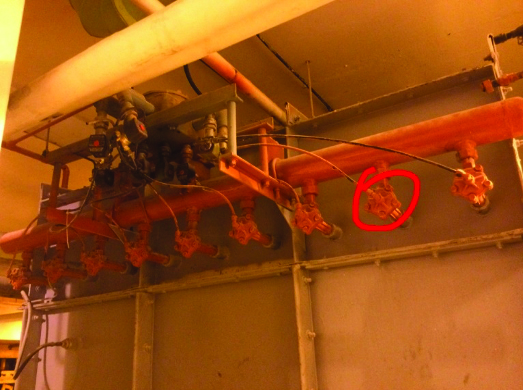 Figure 6. Six reverse pulse dust collectors exist in the facility.  The failure of one blast valve caused low pressure in the plant during a final measurement period. 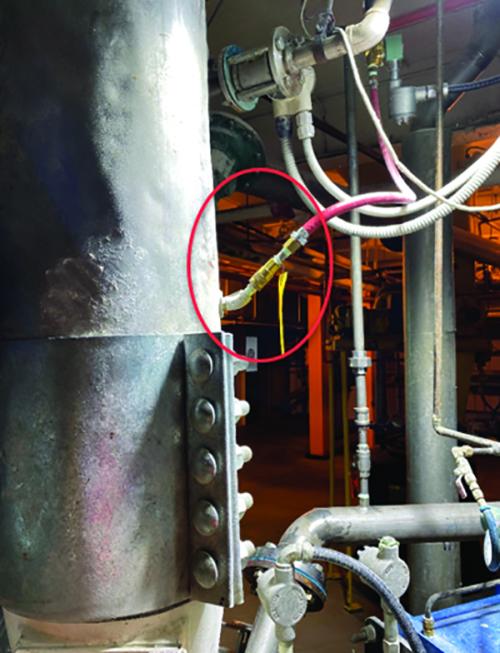 Figure 7. Plant personnel had made modifications to product chutes to prevent clogging, the continuous flow of this blowing represented 15% of the total plant cfm demand. 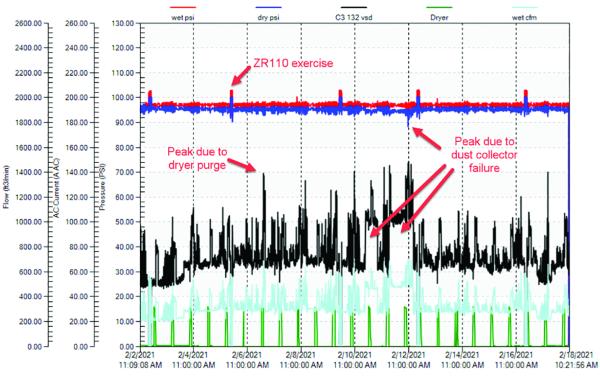 Figure 8. An older 90 kW compressor was replaced with a 132 kW VSD unit.  The new compressor and reduced flow due to end use optimization. Click to enlarge.

Conservative estimates done during the compressed air assessment showed a possible projected reduction in operating costs of 29% could be gained if a new compressor was installed and end uses were addressed. Various improvement projects were initiated, with a five-figure incentive from the local utility offered to help with the costs:

Final verification of this project showed that the end use and leakage repair had resulted in the reduction of the average air demand by175 cfm. With the new compressor installed the system operating costs fell by $28,000 saving 43%, much higher than the projected amount.

This project shows the value of having a thorough assessment done before any compressor replacement. The audit found various unanticipated savings areas that increased the available savings and increased the available utility incentive that could be granted. As a result of the improvement efforts, the plant is now running more efficiently, and more reliably. Plant management have also ensured annual assessments are done to ensure the savings can be sustained.