Air compressors can produce a lot of water. Humidity in ambient air, once compressed, results in much of this water falling out, which we know as condensate. On a warm and humid summer day with inlet air temperatures of 80 oF, a 75-horsepower (hp) air compressor running fully loaded can produce over 25 gallons of condensate in just one eight-hour shift, with another five gallons being produced once the compressed air is sent through a dryer. The compression process allows for the air, water vapor, and lubricating fluids to mix. Once the condensate leaves the system, trace amounts of lubricant travel with it.  This condensate should be processed through an oil-water separator before being discharged to groundwater or wastewater treatment plants.

A wide variety of lubricants including synthetic hydrocarbons, Polyalphaolefins (POAs), Polyolesters (POEs), diesters, polyalkylene glycols (PAGs) and silicones paired with different styles of oil/water separators lead to an often overlooked aspect of the effectiveness a separation system will have in removing lubricant from the condensate water – one type does not necessarily fit all. Here’s what to know about lubricants and oil/water separators to keep your compressed air system up and running – and operating efficiently. 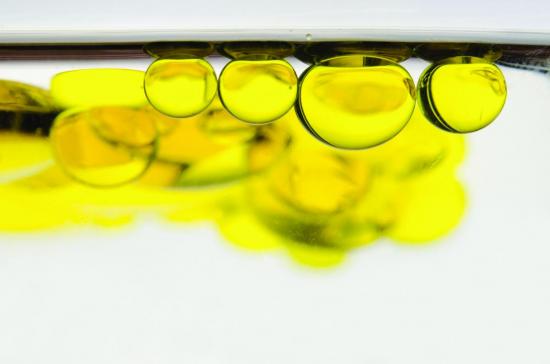 Compressed air condensate, which consists of lubricant and water mixture, needs to be treated through a separation process before being sent to groundwater.

Phases of Water in an Air Compressor Oil System

Water can be exhibited in three phases within the oil system. When water encounters a lubricant, the chemistry of the lubricant dictates the amount of water that can be naturally dissolved, known as the saturation point. Beyond this saturation point, water may then emulsify within the fluid, in which the water and lubricant remain mixed together. This is especially prevalent while the system is running, and the fluids are circulating. Finally, after no more water can be held within the emulsified state, free-water is formed.

Polarity of Water and Lubricant Molecules

Many lubricants though are non-polar, with both ends of their molecular structure not exhibiting any electrical charge. When oil and water are combined, an emulsion mixture is formed for a short period of time. Shortly after settling, water molecules are more strongly attracted to one another than they are to the non-polar lubricant, which is an additional force to cause separation.

Some synthetic lubricants, including polyglycols and diesters are also moderately polar, and when mixed with water, create a steady emulsion that does not easily separate. Common air compressor lubricants, such PAGs, can hold as much as 7,000 parts per million (ppm) of water, while standard synthetic hydrocarbon oils may hold no more than a few hundred ppm. To avoid water accumulation in an air compressor, the system should be run hot enough to allow excess water that has become emulsified with the lubricant to evaporate. Free-water, also known as condensate, is then sent through a drain trap and into an oil/water separator.

The polarity of lubricant and water molecules explains why oil and water don’t mix.

Determining Whether Fluids Will Separate

Two American Society of Testing and Materials (ASTM) test standards can be used in determining whether an air compressor lubricant will readily separate from water, both of which are commonly found on lubricant technical data sheets.

The 1970 Clean Water Act states that local municipalities and their legislatures develop initiatives for the proper disposal of wastewater generated by manufacturing facilities. Fast forwarding to 2020, it is now generally accepted that air compressor condensate be treated to remove trace amounts of lubricant before the condensate water is sent down a groundwater system or to a municipal wastewater treatment plant. 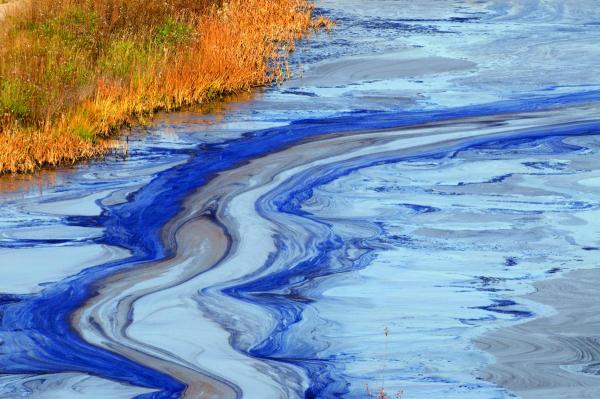 Regulations for condensate water going to a municipal wastewater treatment plant vary somewhat by locality. The concentration levels allowed by municipalities can range from 10 ppm to 100 ppm of residual oil in the discharged water. A common misconception is that this residual oil limit is measured at each system across a facility independently (i.e., the condensate leaving the air compressor). Rather, the regulation is normally for the entire waste stream from the plant. Since the air compressor is commonly a small component of the entire wastewater flow, the level from the air compressor might be substantially higher than the local limit, without causing the total wastewater stream from the plant to be close to the local limit.

The level of lubricant in the condensate will vary from day to day. For example, on a hot and humid day conditions will result in a higher volume of condensate because of the increased amount of moisture entering the air compressor. Assuming air demand remains the same, there will be the same amount of lubricant in a much larger amount of water. While local and state regulations regarding contaminant concentration limits can vary widely, plant personnel must determine the requirements for their site.

With the condensate leaving the air compressor being more than 99% water and less than 1% lubricant, oil/water separators are often used to assist in the reduction of the lubricant down to acceptable levels. 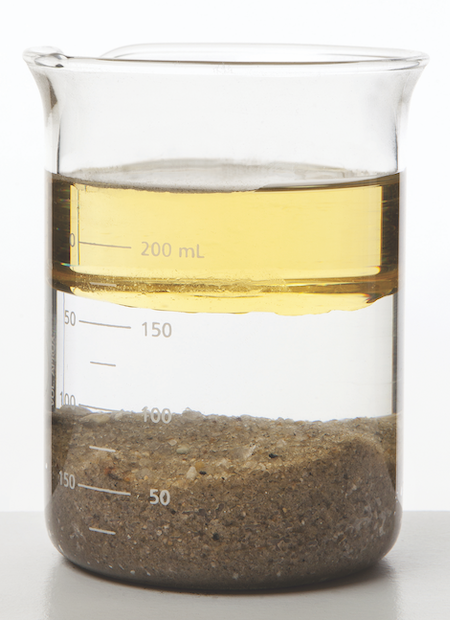 Oil/water separators help lower the amount of lubricant in compressed air to acceptable levels before condensate water is discharged.

The two most common oil/water separator types used in the air compressor industry are gravity separation and chemical absorption. Evaporative separators are also available, but only make up a very small percentage of installations.

Gravity separation systems function by allowing the condensate to flow into a settling tank for the water and lubricant to naturally separate. With a lower density, the lubricant floats to the top and is then skimmed off into a separate container for disposal. Various types of porous media, such as polypropylene or activated carbon, are then used to increase the surface area the condensate is in contact with. This helps aid in the removal of remaining oil in the condensate and serves as a finishing filter. The treated condensate is then discharged from the separator.

These gravity style oil/water separators perform well with lubricants that have low saturation points and do not form an emulsion with water. Low-density lubricants and water naturally separate when settled in the unit. Higher density lubricants, such as PAG’s, do form emulsions, and may not effectively separate through this gravitational method. As a result of this, alternative media bags or oversizing of the system to allow for more dwell time and to also allow for further increased surface area across the media, may be recommended by oil/water separator manufacturers to overcome this emulsification.

These chemical adsorption style oil/water separators have a high holding capacity of approximately 50% of the media bed by weight. The polar, porous media easily attracts emulsified lubricant from the water as it flows through the bed. Non-emulsified lubricants will also separate in this process, with much of the lubricant remaining toward the top of the media bed. Over time, the oil content within the separator begins to accumulate, which can potentially lead to decreased efficiency. For this reason, the parts per million of lubricant in the oil/water separators discharge water should be regularly monitored. With proper monitoring, a user should begin to understand “mean time between failure” for their system and change the systems element or media bag at the appropriate interval.

Both types of systems may experience efficiency losses in their ability to separate the oil/water condensate and their holding capacity when lubricants of different types are mixed in the unit. As a result, many manufacturers recommend that if multiple air compressors have their condensate discharge piped into the same separator, a common lubricant chemistry be used across all systems. Likewise, different media types are more efficient with polyglycols versus hydrocarbons, and media should be selected for the appropriate type of lubricant.

Finally, evaporative systems utilize electrical heating elements to raise fluid temperature. This allows the condensate water to separate via steam, leaving behind the lubricant for periodic draining and disposal.  Evaporative systems are typically more costly to purchase and operate when compared to gravity separation and chemical adsorption systems. Additionally, some lubricants, when heated in these systems can emit harmful gases that should not be inhaled.

Visual comparisons of treated condensate to tap water are a common validation that lubricant has been removed properly prior to discharge down groundwater drains. In many cases however, the lubricant remaining in the condensate may not be readily visible. There are many water analysis laboratories available that can easily evaluate condensate water samples for true lubricant concentration levels. These levels can then be measured against local regulations on concentration limits.

All photos courtesy of SA Performance.