Then came programmable logic controllers (PLCs), basically automating the function. They still effectively are being virtual pressure switches. The smarts are in figuring out how many air compressors should be running, and to only trim one, without using a cascade arrangement. Some of these controllers are called “master controllers”, or “management systems”.

The goal of this article is to give some pointers for selecting and installing the right master control system for systems with one or more VFD air compressors.

In a nutshell, I recommend the following type of master control logic, or “algorithm”, when a VFD air compressor is added to a multiple air compressor system:

VFD air compressors have OEM-engineered “PID” (proportional-integral-derivative) control, or a subset of it. Proportional control is the varying of a control variable based on the error between set point and actual process variable, to cause the process to come in line with the set point. In other words, if you set the VFD to control for 100 psig, and the pressure is 99 psig, you would “push” the VFD half as hard as if it was at 98 psig. Integral control is for correcting longer-term events, like after a base-load air compressor unloads and the VFD is spooling up to catch the system, and pressure dips below its target briefly. Like steering a ship against a side-wind, the controller steers the pressure back up to the target. It is used to get the compressed air system back into the target where it needs to be. Derivative control is for “damping” the system based on fast changes in system pressure, minimizing overshoot and undershoot.

Ensure All Compressors Have a Common Sensing Location

A frequent mistake in adding a VFD air compressor is to install it by itself with its own dryer. The problem is the VFD responds to pressure it sees, on the front of the dryer, different than downstream pressure, as seen by the rest of the system. If the other air compressors are put on a sequencer, the VFD can’t be synchronized to work in concert with them. This will cause unstable operation. When the VFD ramps up, it creates a dramatically higher pressure drop across its dryer than at low speed and the pressure on the backside will dip. Other air compressors will start and load when not needed, and then the system will back off and do the opposite, back and forth.

Figures 1 and 2 show the wrong and right way to add a VFD air compressor to a multiple air compressor system. One merely needs to add a “wet” crossover line and then control at either the common wet or common dry side. I prefer wet side control, because the air compressor displays all indicate pressure at the location of their pressure transmitters – the package termination point, and most OEMs don’t like moving the pressure transmitter to downstream of the dryer. One can certainly make a good argument for controlling the system on the dry side, but your local and remote pressures will not be the same and the difference will wander based on filter pressure drop. 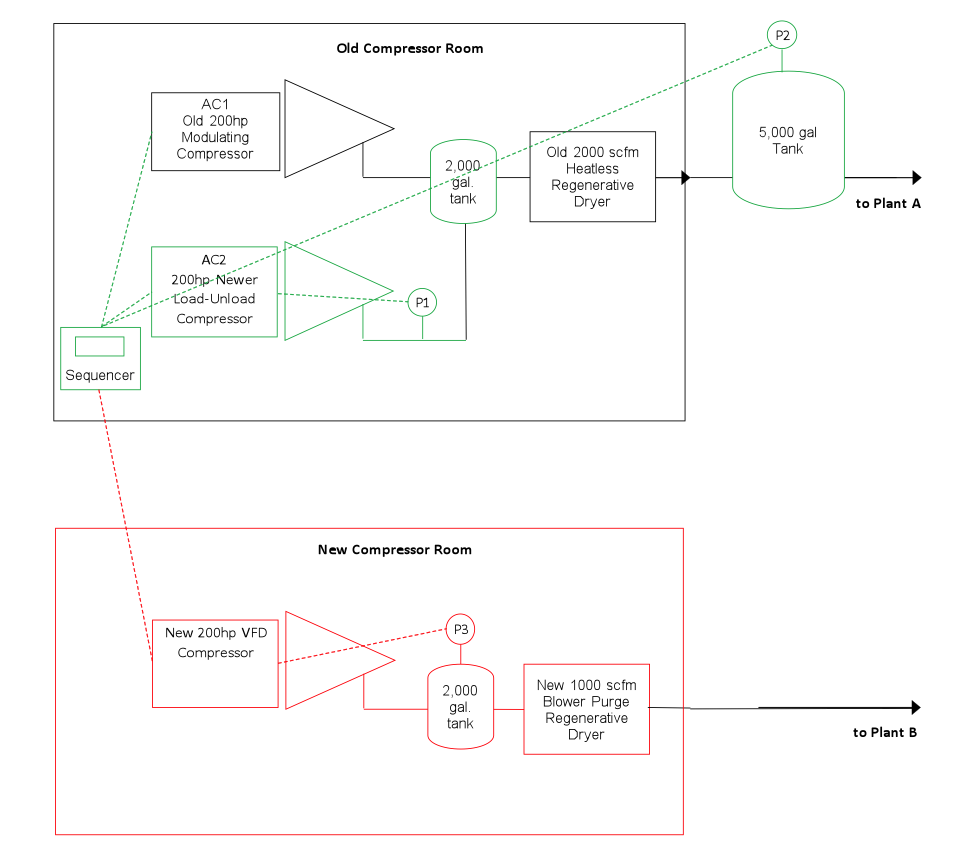 Some air compressors use proprietary communications protocols, and need a converter/interface board to be added so a third-party master controller can interface with them.

The base-load air compressors might be newer units with electronic control panels. If so, all the same questions need to be answered for them as well, except for the floating point numbers. If they are older electro-pneumatic control, they probably need wiring modifications to be controlled remotely, including:

An electrical schematic needs to be sent to the master controller vendor or consulting engineer in advance, so they can provide a wiring modification schematic and parts.

This is an interesting step, since most of the people selling sequencers don’t know what the “control algorithm” is for their sequencer. Just put in the box, run a cable to each air compressor, and it will learn and tune itself. This is Industry 4.0! All controllers have an algorithm, and for screw air compressors will be one of three, as far as I have experienced:

2. Target algorithm. This is the one to use with a properly sized VFD air compressor. The VFD air compressor speed control is set in the middle, or “target”, and the base-load air compressors “bracket” it. They operate with one or multiple pressure windows, fully bracketing the VFD. See Figure 4.

This system can operate in less than 8 psi overall pressure range, depending on storage and tuning. Timers are set in the master controller so only one base-load air compressor starts/loads or unloads at a time, and the VFD is given time to respond. Base load air compressor starts and stops should be infrequent. Not all “target sequencers” can control a VFD air compressor in the proper way. Many of them require the VFD to be set separately from the sequencer itself. This is not ideal. It is best to put the set-point control of the VFD under the control of the master controller, and then the other air compressors will work in concert. And to adjust the system, you merely change the “target”.

No control algorithm will tune itself, no matter how sophisticated it is. I tend to prefer simpler algorithms with known “knobs” for tuning. Usually, these are the pressure bands and timers. One needs to test the installed system at peak and minimum loads, and in transitions between them, both slowly and quickly. Preferably with fine-sample data-logging occurring, so data can be reviewed and specific tuning parameters changed.